How are sanctions against Russia developing? Have they had an impact on trade activity? This report reviews data from third-party countries to assess the impact of sanctions on Russian trade and finds that Russia’s trade with the EU, China and the U.S. fell by 13% sequentially in April vs. March and by 4% sequentially. Looking ahead the transformation of global energy flows may limit further declines though many sanctions have yet to be fully implemented.

Western sanctions against Russia were not designed to shut down Russian trade entirely, nor have they. While there are signs of strength in Russia’s macroeconomic numbers-most notably the ruble-multiple parts of the sanctions regime have yet to be fully implemented.

Based purely on the state of the Russian ruble, the Russian economy is strong after a short downturn at the start of the Ukraine conflict. 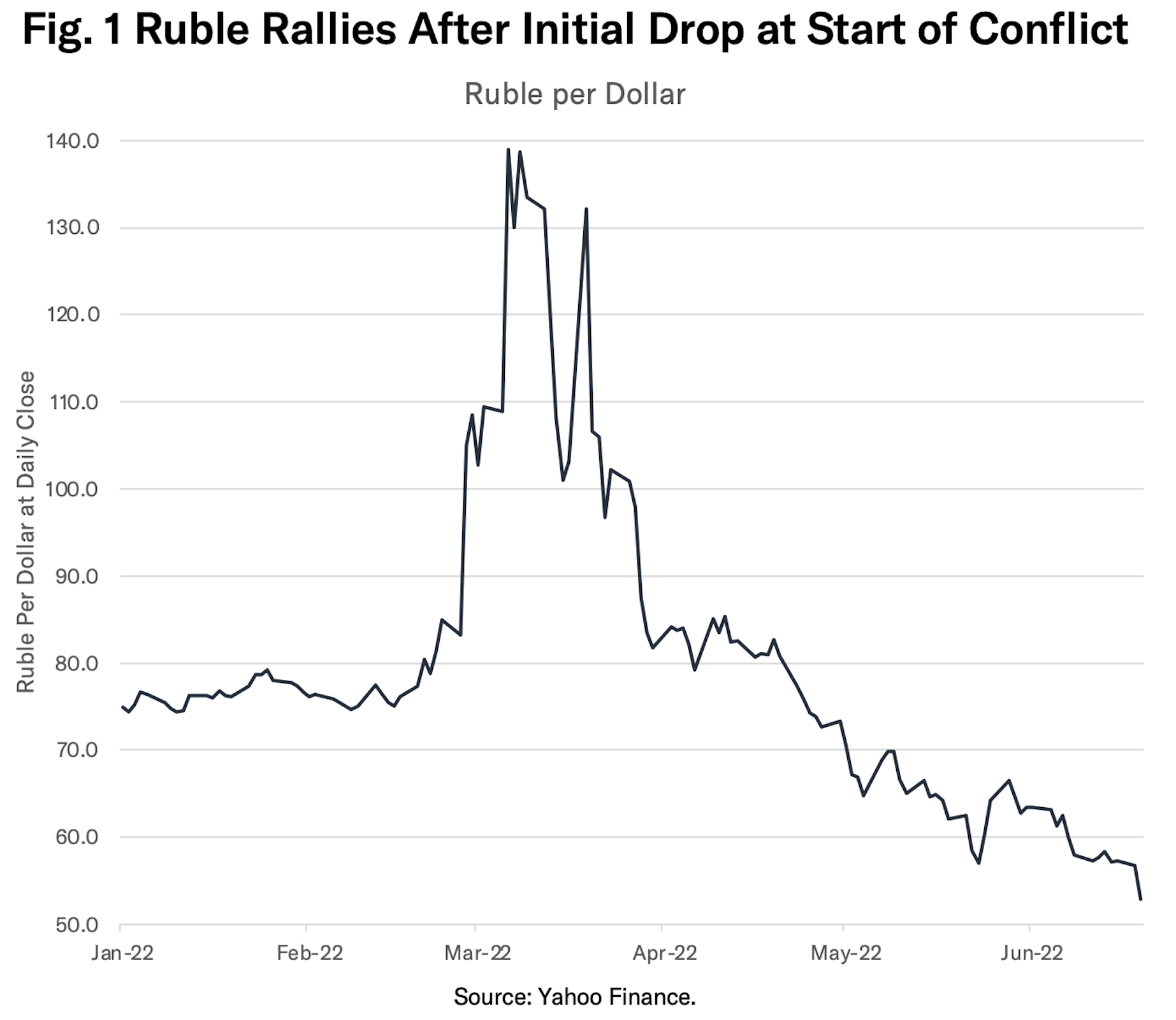 As shown in the chart above the ruble weakened to 138 per dollar by March 21, 2022 after sitting at an average 75 per dollar in the month running up to the start of the conflict. Since then, however, it has strengthened to 53 per dollar.

So have sanctions failed? The initial round of announced sanctions applied against Russia in the wake of the February 24 start of the conflict in Ukraine was swift and widespread, as discussed in Flexport research in early April.

Predominantly covering exports, sanctions have subsequently been expanded to include energy products such as coal and extraction machinery as well as a wider range of consumer goods.

The implementation of the sanctions is being phased in over time. Many of the non-mining goods sanctions have only come into force as of mid-June, as shown by recent restrictions on rail transportation by Lithuania into the Russian exclave of Kaliningrad.

Separately the U.S. Treasury Department extended the exemption period for payments for energy related products to December 5 from June 24. Indeed, there’s reportedly been a steady increase in Russian oil exports both to Europe and Asia since the early days of the conflict. That’s against the backdrop of an EU commitment to cut usage of natural gas from Russia by two-thirds by March 2023.

Further sanctions, particularly by the U.S. and EU, cannot be ruled out. For example the U.S. is considering a cap on Russian oil prices as a way to “depress oil revenues” as well as “prevent spillover effects to low income countries” according to U.S. Treasury Secretary Janet Yellen. Thus far it appears unlikely that countries that haven’t applied sanctions-such as China and India-will do so.

It’s important to note that even if the rate of new sanctions has slowed, their implementation has been protracted, and their spread non-global, they could nonetheless last for many years and impact global supply chains. If nothing else, many corporate operators in Russia have either temporarily suspended operations in Russia or permanently withdrawn by selling or closing their operations.

So, have the sanctions had a measurable impact on Russian trade so far? The Russian government has reportedly classified international trade data to “avoid incorrect estimates, speculation and discrepancies”. That follows a similar move regarding oil production and trade and makes assessing the impact of sanctions against Russia more complex. 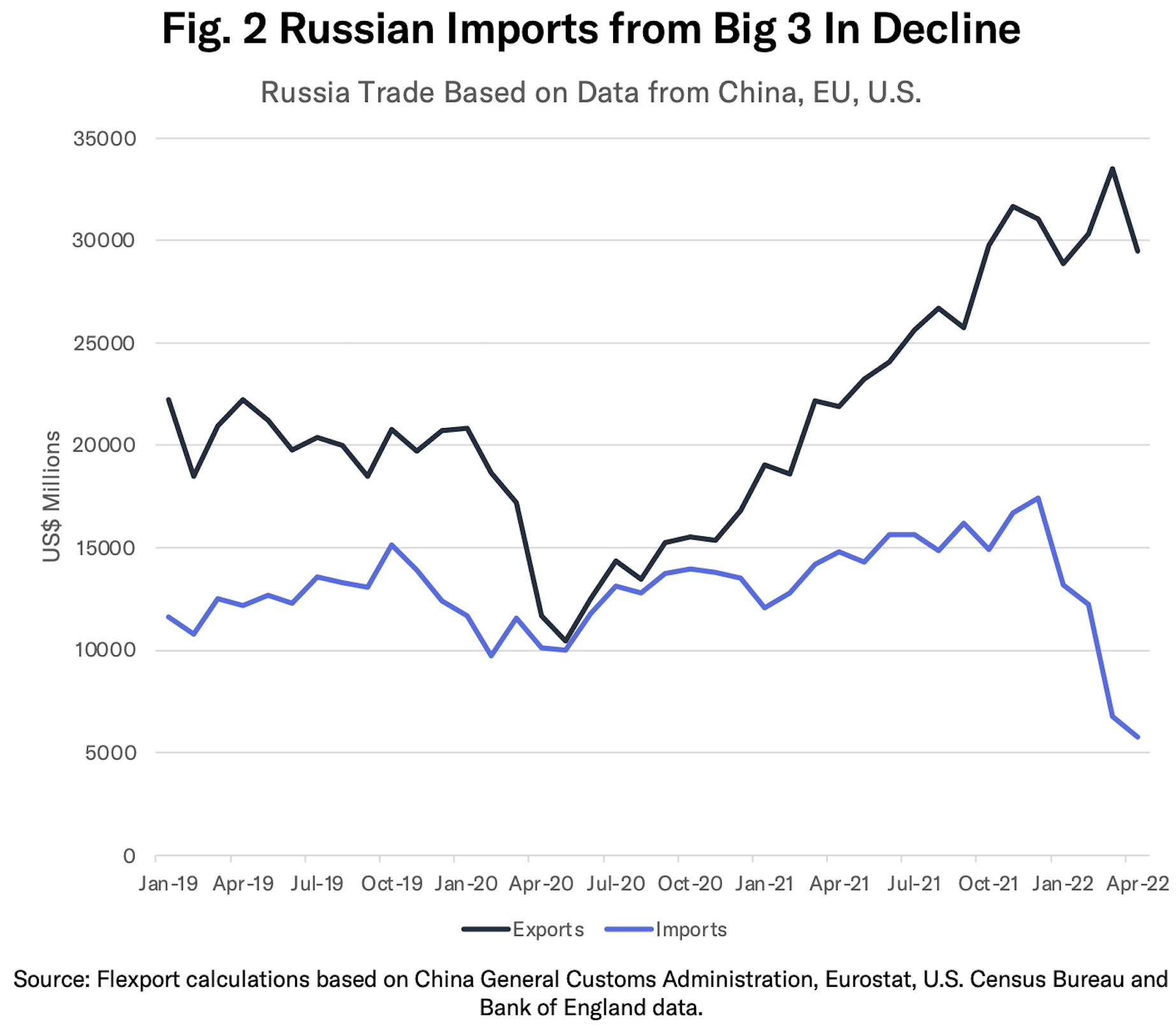 That was largely driven by a slump in imports, which dropped by 15% sequentially and by 61% year over year.

Exports fell by 12% sequentially but were nonetheless 35% higher than a year earlier. The year-over-year expansion likely reflects: elevated commodity prices; extensive grace periods for the implementation of energy-related sanctions, as discussed in previous Flexport research; and a realignment of globally fungible commodity trade flows. 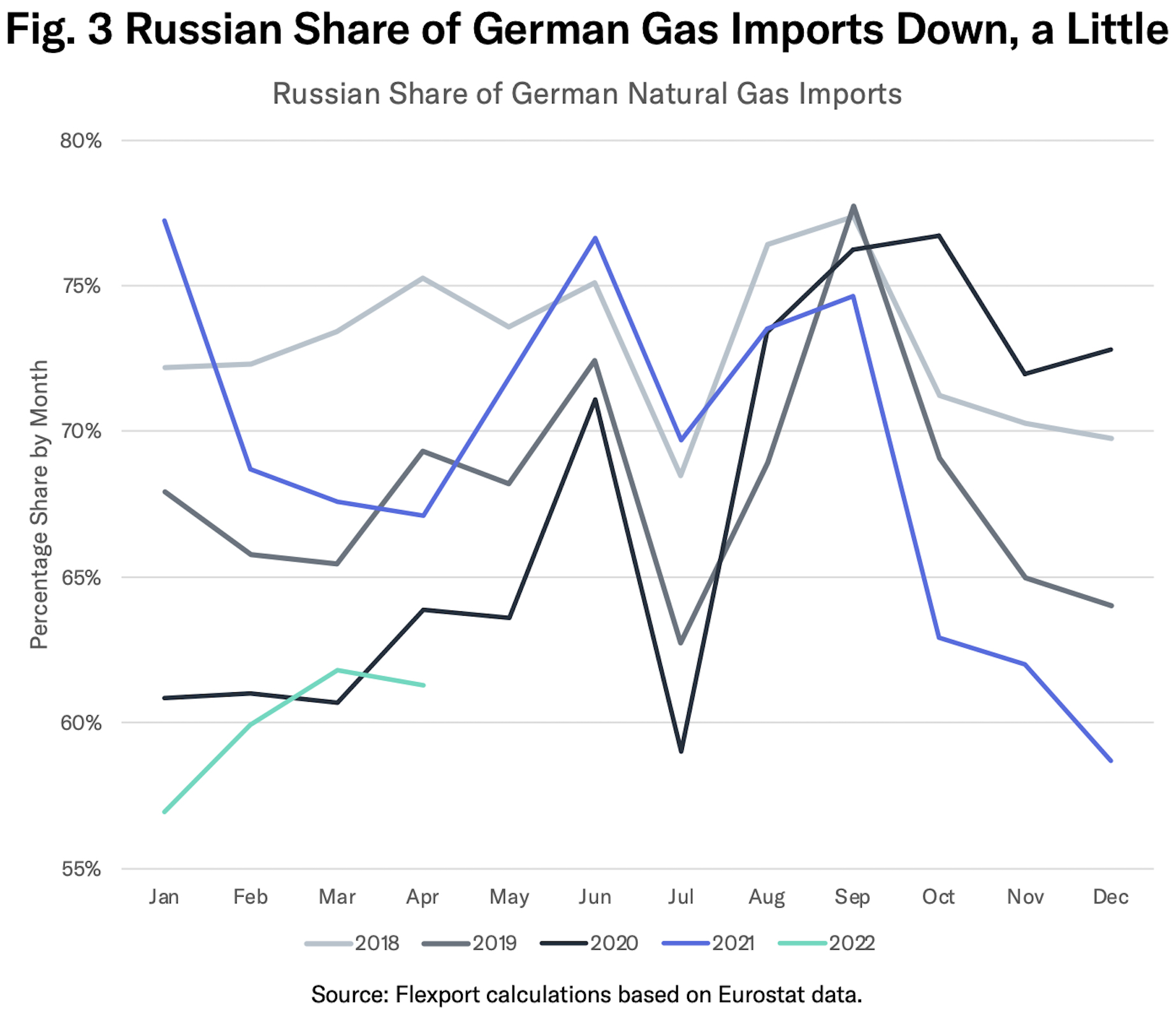 The process of transformation is set to continue. Russian exports accounted for 60% of German imports in the first four months of 2022, down from an average 68% in the prior five years for the same period as shown in Figure 2 above. Late-year imports also fell during fall/winter 2021.

More recently, Russia’s Gazprom twice cut shipments via its Nordstream 1 gas pipeline to Germany in mid-June, with flows down to just 40% of capacity. The Russian government has also threatened to cut supplies via the pipe completely. That may affect the German, and European, gas system’s ability to rebuild stored supplies ahead of winter 2022/23.

While energy-related sanctions are proving slow to reach implementation, technology sanctions have already taken effect with 37 countries restricting exports of technology and engineering products to Russia. 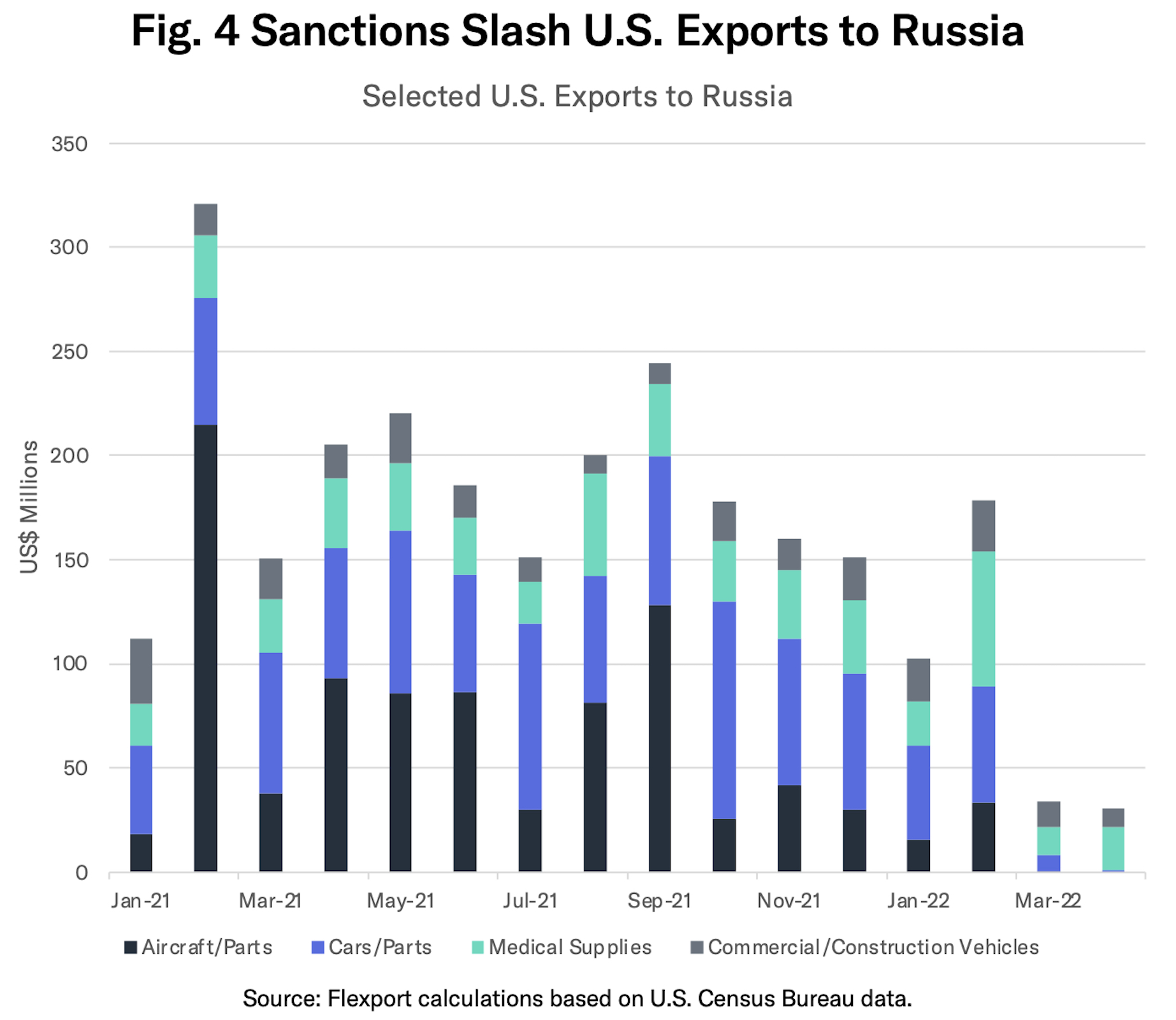 Total U.S. exports to Russia fell by 82% in April vs. March and by 86% compared to a year earlier. Around half of the drop on a year-over-year basis in dollar terms was accounted for by aircraft and aerospace parts, cars and car parts-shown in Figure 3-and computer equipment.

Yet, there are still significant exports of medical supplies and commercial/construction vehicles, though both are already down by around 40% year over year but still account for $30 million per month of exports.

In conclusion: Sanctions against Russia have been wide-ranging and have already started to cut into Russian imports. Exports however remain robust due to the globally fungible nature of commodity flows and phased implementation of most energy-related sanctions.