For a large collection of major economies, goods trade dipped from Q2 to Q3. The dip comes after a two-year stretch of trade growth that differed markedly from the decade before and that took trade values to new heights. 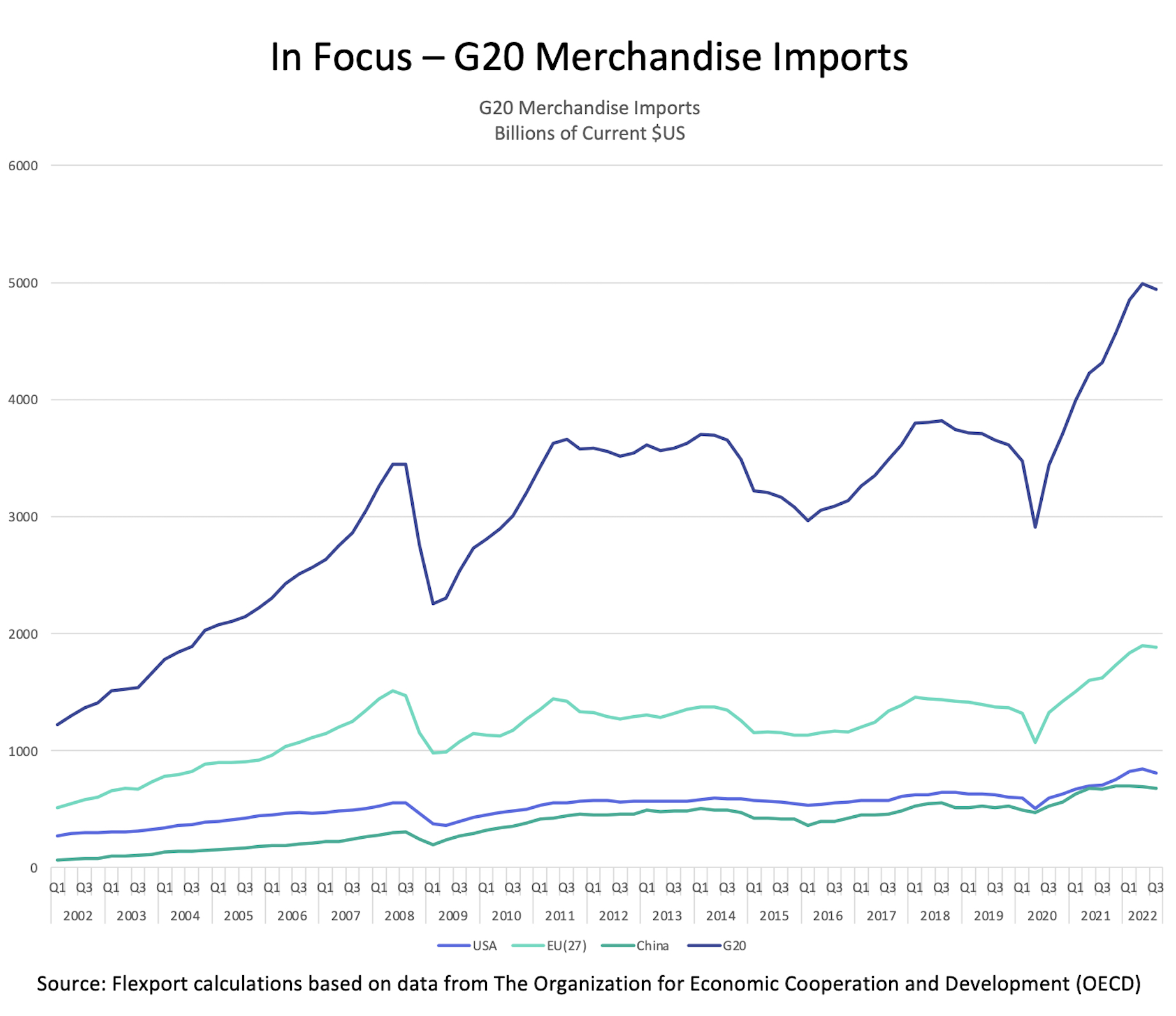 A broad measure of global merchandise trade fell in Q3. The Organization for Economic Cooperation and Development (OECD) reported that merchandise imports fell by 1.1% and exports by 1.3% for G20 countries. The G20 is a collection of countries that accounts for roughly 75% of world trade and 85% of world GDP.

The quarterly drop in trade figures is the first in two years. While the drop is partly attributable to declining oil and commodity prices, the figures are nominal (not inflation-adjusted) so the real change would be even greater.

The chart above aims to put recent developments into historical perspective. It traces merchandise import values in current dollars for the G20 and for several of its major constituents—the US, the EU(27), and China. The quarterly dip is visible as a slight decline in each of the lines, after a long runup from the depths of the pandemic shock.

Looking at the top line, the G20 merchandise import figure, one can break two decades of trade experience into three eras. The first, from 2002:Q1 to the eve of the global financial crisis in 2008:Q2, shows a continuation of the rapid trade growth that characterized the post-World War II era. For the entire G20, merchandise imports over this first stretch grew by 181.2%. While nominal numbers may exaggerate a bit because of inflation, it was still substantial growth in trade.

That rapid growth was common across the constituent regions shown. The US has the slowest merchandise import growth over that first period, up 103.2%. The EU(27) saw imports grow by 194.7% and China by 360.0%.

The global financial crisis in 2008 marked a sharp break that lasted for more than a decade. Even in nominal terms, G20 merchandise imports grew by only 0.9% from 2008:Q2 to 2020:Q1. For the EU, merchandise imports actually shrank by 12.6% over this stage.

Then, in the wake of the Covid-19 onset, merchandise imports took off again. From 2020:Q3 through 2022:Q3, they grew 43.5% in the G20, 35.6% in the US, 41.8% in the EU, and 28.3% in China. Whereas the trade recovery from the global financial crisis largely just restored the levels that had held before the shock, the post-Covid recovery lifted trade values substantially above their pre-shock levels.

In the first era shown on the graph, up to 2008, the increase in merchandise import values was pretty much uninterrupted. The second era, between the global financial crisis and Covid, saw a number of significant dips and rises that mostly ended up balancing each other out. The third era, starting two years ago, has been one of steady merchandise import growth—until this past quarter. It remains to be seen whether the most recent dip represents just a pause in an ongoing rise, or whether it signifies the end of an era. For the moment, import values remain near all-time highs.

Crude oil prices continued their fall that dates back to early June. The reference West Texas Intermediate (WTI) crude was at $121.51 per barrel then. Most recently, it had fallen to $74.09, a drop of almost 40%. That took the price back to levels last seen in December of 2021.

German real GDP grows in Q3 by 0.4% over Q2 and 1.3% over Q3 of 2021. The result was largely driven by household final consumption expenditures. The growth meant that German GDP regained its pre-Covid levels for the first time.

The University of Michigan’s US consumer sentiment measure in November fell 5% below its October level. Buying conditions for durables deteriorated most notably in November.

US durable goods orders climbed 1.0% in October, in nominal terms. It was the seventh rise in the last eight months. Transportation equipment led the increase, up 2.1% for the month.

Top officials of France and Germany called for a new European industrial policy that would respond to the US Inflation Reduction Act. They wanted the policy “to prevent downside effects of protectionist measures by third countries and will ensure that WTO rules are respected by all.” A key concern is the Inflation Reduction Act’s incentives to “Buy American” on green technologies.

The People’s Bank of China cut its reserve requirement for banks, effective Dec. 5. A cut in reserve requirements is a form of monetary loosening. It contrasts with the tightening measures being undertaken in the US, the UK, and the Euro Area.

A USMCA dispute panel has reportedly completed a preliminary report on auto rules of origin, with a final report expected around the new year. A tightening of auto rules of origin was one of the principal novelties of the USMCA relative to its NAFTA predecessor. Canada and Mexico have objected to the way the US has interpreted the new rules.