Waiting for the Turn - The Future for Durables Goods Trade

What would a slump in consumer spending mean for ocean shipping services? The boom in demand for consumer goods, and particularly bulky durable items, has been a major driver of demand for logistics services during the 2020 - 2022 period. While our indicators do not yet show a return to pre-pandemic goods consumption, we consider and quantify the hypothetical case of what such a return would mean for TPEB volumes. A downturn in demand, once inventories are rebuilt, could drive a marked downturn in demand for shipping services. A return of furniture, home appliance and leisure goods imports on TPEB lanes to 2019 levels could cut over 8% from total volumes shipped. 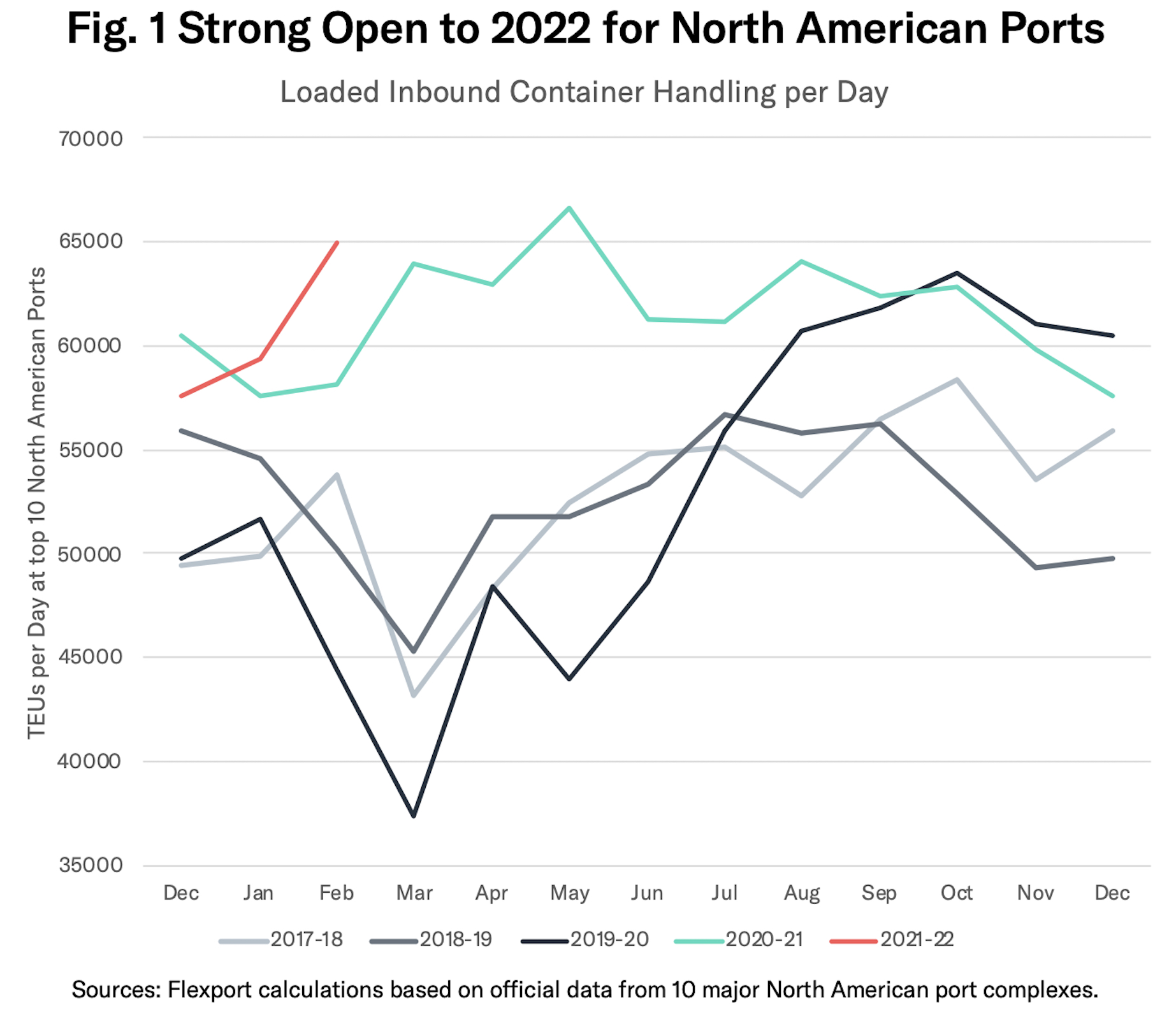 The expansion in demand, as shown in Figure 1, has culminated in U.S. seaborne imports to the top 10 ports rising by 25% in the three months to February 28 on a days-adjusted basis versus the same period of 2020 - immediately before the pandemic - and by 13% compared to the same period of 2019.

The network congestion issue can be clearly seen in Flexport’s Ocean Timeliness Indicator which is close to record highs, with the first stage of shipping times (cargo ready to Asia port departure) having increased in early 2022. While both the overall OTI and its first stage are lagging indicators, the first stage numbers are substantially more recent.

In recent Flexport research reports we have built up a picture of the potential turnaround in consumers’ preferences for goods versus services as well as an apparent trend towards rapidly refilling retail inventories versus sales. 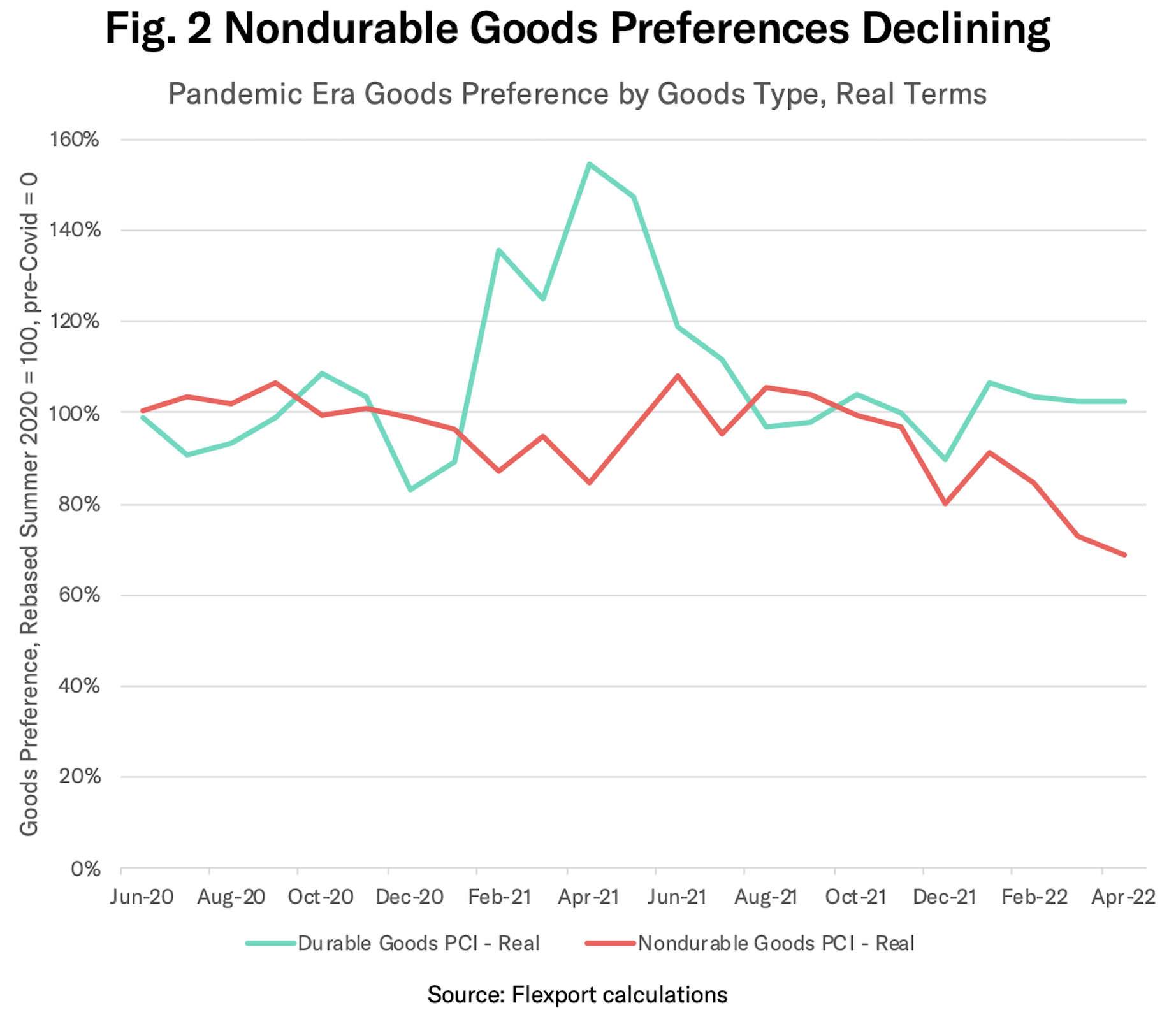 As shown in Figure 2, consumer preferences adjusted for inflation have stabilized at summer 2020 levels for durable goods and have started to decline for nondurable goods. The inventory/sales ratios for the major consumer durables sectors have already returned to pre-pandemic levels in some instances, mitigating the need for additional shipments to refill depleted stocks.

It is therefore worth asking: what might the impact of reduced demand for consumer goods shipments look like?

Shipping volume growth on Transpacific Eastbound routes (all Asian ports to all U.S. ports) routes has outpaced that on other U.S.-inbound lanes since the start of the pandemic. 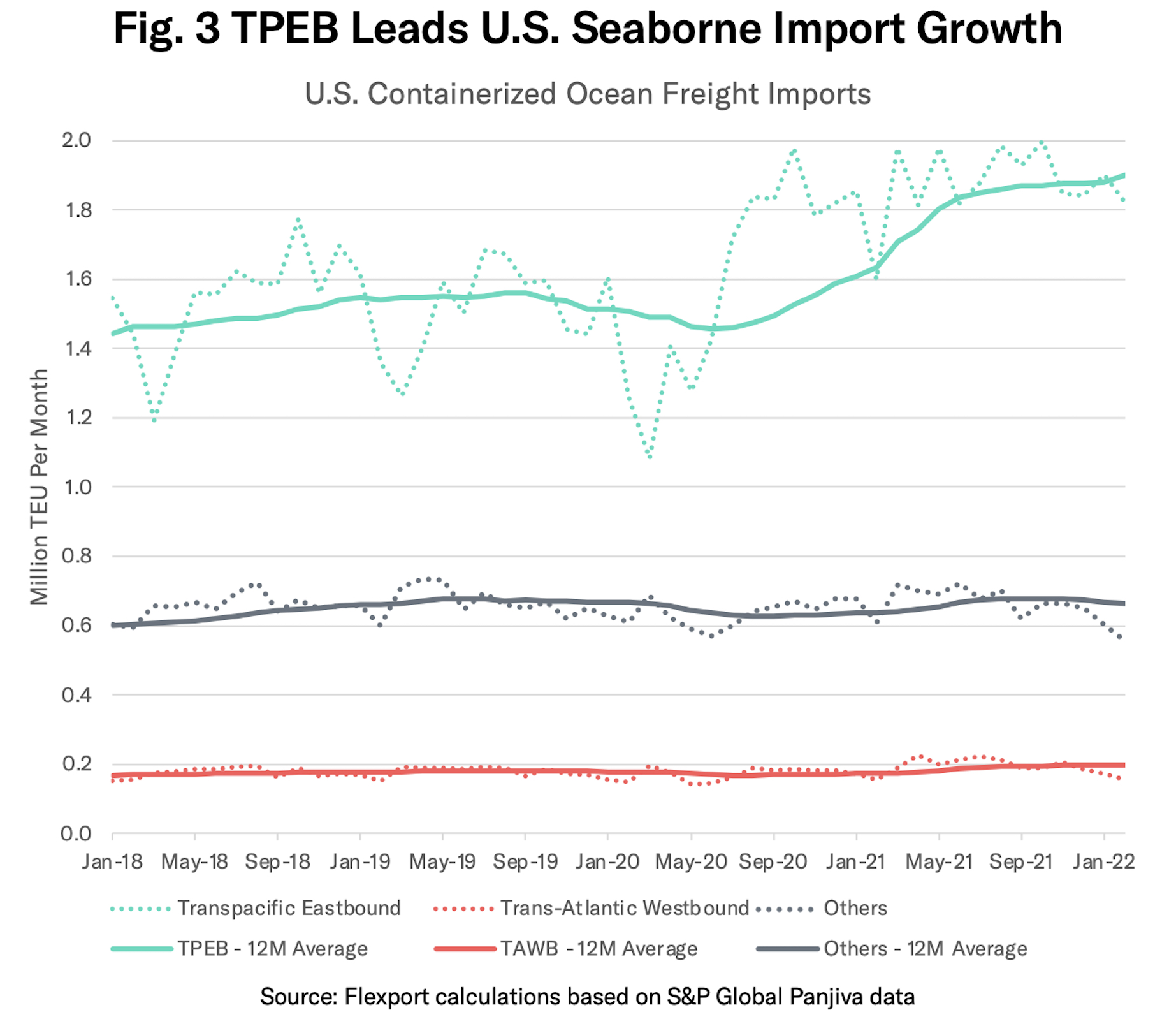 The largest contributor to the growth in shipping has been consumer durable goods. Figure 4 below shows that consumer durable products accounted for 25% of U.S. seaborne imports of containerized freight in the 12 months to Feb. 28, 2022. That rises to 34% for TPEB led by home furnishings, due in part to their bulk. 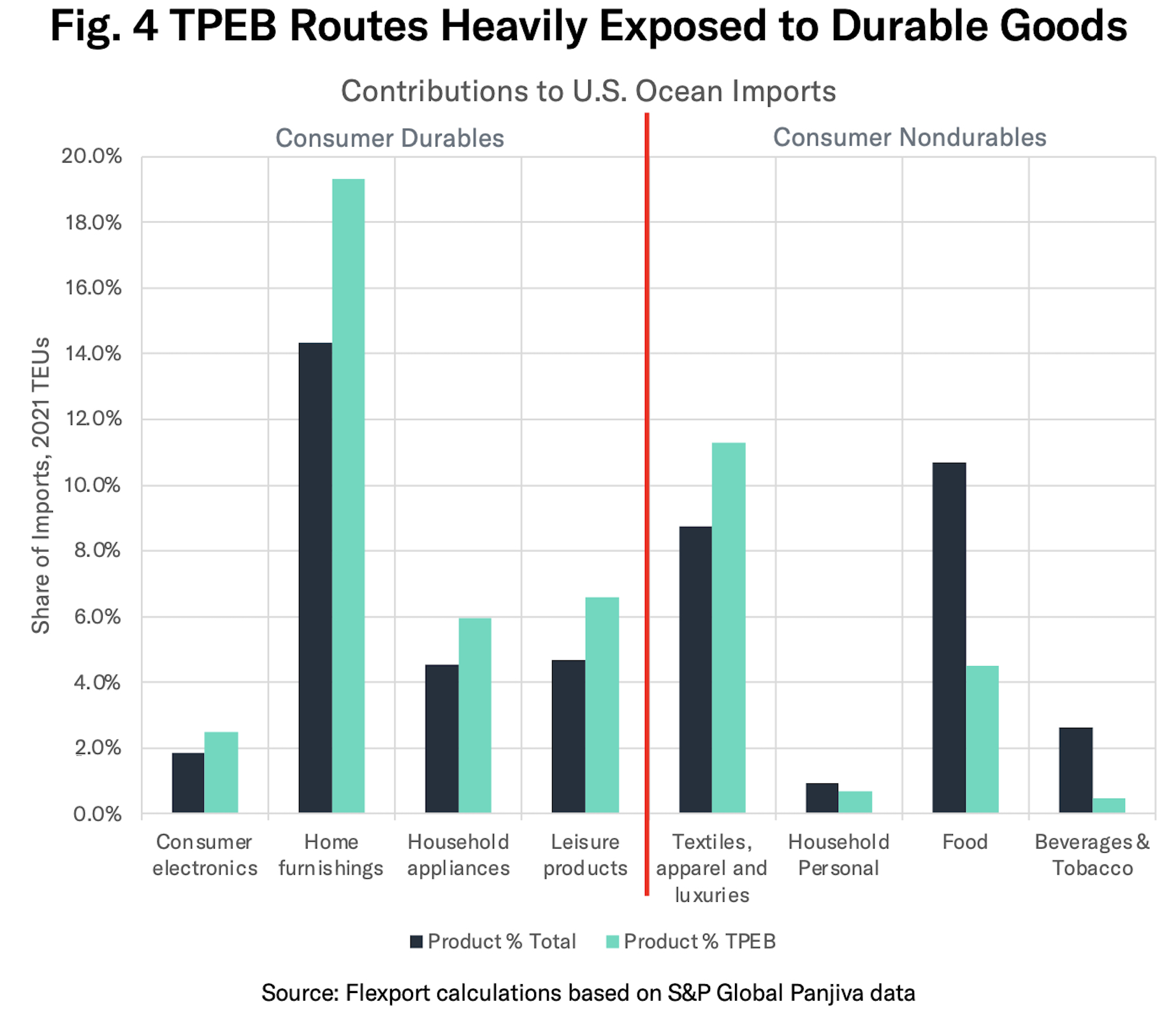 Consumer nondurables accounted for 23% of total traffic and 17% of TPEB traffic, in this case led by textiles and apparel on TPEB. The proportion of consumer nondurables on non-TPEB routes is higher largely due to the importance of Europe as a source of food and home/personal care products. 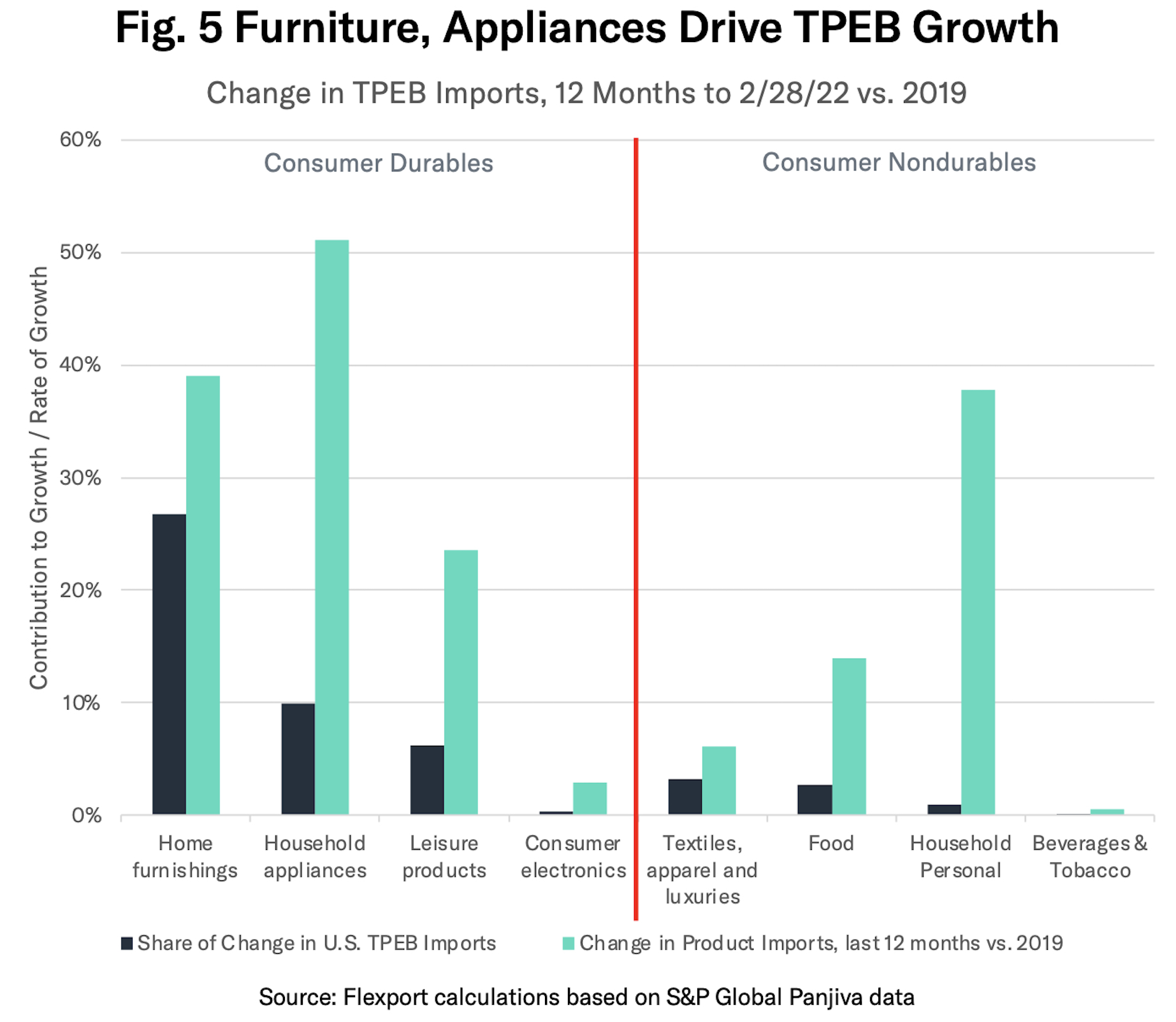 The black bars in Figure 5 meanwhile shows that the four consumer durables goods sectors’ imports accounted for 43% of the 4.6 million TEUs per year increase in U.S. seaborne imports on TPEB lanes in the 12 months to Feb. 28, 2022 compared to the calendar 2019.

Among the major sectors, imports of furniture increased by 39% (green bars in Figure 5), or 1.24 million TEUs per year of growth. That’s equivalent to 27% of the total expansion in TEUs. Other things equal, a return to 2019 levels of imports in furniture alone could cut 5% from TPEB import volumes on a full year basis.

Other sectors that have expanded markedly include a 51% rise in household appliances, which represented 10.0% of the growth in TEUs, while a 24% increase in leisure imports accounted for 6% of the TEU expansion. A return of both to 2019 levels would cut TPEB shipments by 3.3% combined.

It is, of course, possible that shipments of consumer durables drop below 2019 levels in the event of a marked spending pull-back - for example caused by an interest-rate linked recession. In 2009 U.S. seaborne imports of furniture fell by 16% compared to 2008.

A drop in nondurable consumer goods to pre-pandemic levels would cut a further 1.4% from TPEB volumes. Additionally, it should also be noted that non-consumer products will include materials and components that are used for U.S. manufacturing of consumer goods and as such may also decline in the event consumer spending collapses.

In aggregate imports outside consumer goods expanded by 26% in the 12 months to Feb. 28 versus calendar 2019. A return in non-consumer goods volumes to 2019 levels would cut 10% from volumes.

In conclusion: Elevated consumer spending on durable goods has been a significant driver of logistics activity in 2020, 2021 and early 2022. While our indicators do not yet show a return to pre-pandemic spending, inventories and trade levels, were we to see such a move for consumer durables it would therefore have a marked impact on U.S. inbound shipping volumes heading into the remainder of 2022.