Neil Armstrong and Buzz Aldrin walked on the moon in July, 1969. When they returned to Earth, they filled out a customs declaration. Not even a successful moon mission could save the spacemen from red tape.

Last August, Buzz Aldrin tweeted out a picture of the customs declaration he filled out after he landed on Earth. The declaration was dated July 24th, the day that the spacecraft splashed into the Pacific Ocean near Honolulu. 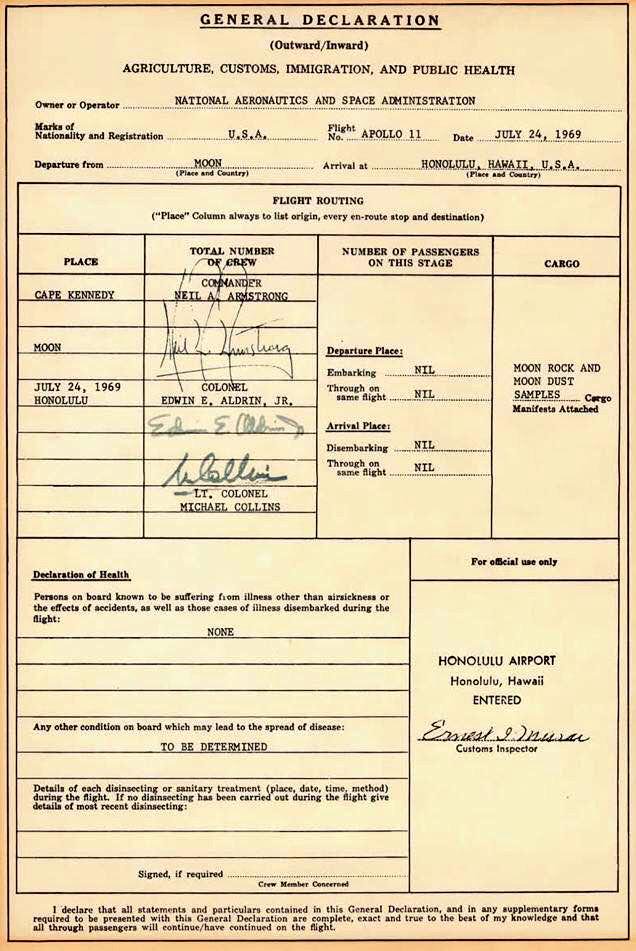 The form was standard, its contents were not. The flight number they listed? APOLLO 11. The goods they declared? MOON ROCK and MOON DUST (all 50 pounds of the stuff). And their port of departure? The MOON.

This declaration is now handled by U.S. Customs and Border Protection. It’s Form 7507, and exists in nearly identical format today. Go ahead, you can fill it out yourself for fun.

Fortunately, astronauts no longer have to go through customs declarations after they return from space. A 1984 statute in the U.S. Federal Code (19 U.S. Code § 1484a) is titled “Articles returned from space not to be construed as importation.” It appears to be an amendment to the infamous Tariff Act of 1930, which is better known as the Smoot-Hawley Act. That’s the piece of legislation that raised U.S. tariffs on over 20,000 imported goods; because it helped spark a trade war, Ben Bernanke has identified it as being partly responsible for prolonging the Great Depression.

A few questions came to mind after we learned about the customs forms:

So we have to ask: Is Elon Musk this enthusiastic about getting to Mars because he has something to smuggle?