A surge of new COVID infections has caused officials in Shanghai and other regions in China, including Beijjing, to extend lockdowns, mandatory testing and quarantine periods. While the exact policies and restrictions vary from region to region and city to city, one of the main challenges in recent weeks has been the cross-province movement of the trucks that carry goods between factories and ports.

Bloomberg estimates that $22 trillion in global goods trading may be hit with months of severe disruption. On Monday, stock markets across Europe saw declines based on fears that the lockdowns in China could significantly impact global supply chains.

Over the last 10 years, the U.S. has imported more goods from China than any other country in the world. In this new reality where we could experience COVID outbreaks for years, these continued shutdowns could result in significant, long-term logistics disruptions that spell more bad news for U.S. consumers. Once these current lockdowns ease up, the surge in shipping volume is expected to trigger yet another wave of congestion and delays at major U.S. ports like Los Angeles/Long Beach.

According to Reuters, more than 370 million people have been impacted by the latest COVID-related lockdowns across China. That’s nearly a third of the population that’s under some form of lockdown that’s also led to the partial or complete closure of multiple stores and factories.

This week alone, China expanded Covid testing to almost all of Beijing’s 22 million residents after 33 new locally-transmitted cases were reported.

The lockdowns have delayed shipments for many importers, driving more competition for goods, and an increase in prices that’s fueling inflation around the world. But long-term effects on global trade will depend on which cities get shut down and how long the lockdowns persist, with some experts predicting the impact on industries like auto and consumer electronics will extend well into summer of 2022.

China Shifts its Focus to Beijing

The Port of Shanghai is the world’s largest port based on cargo throughput and accounts for approximately 20% of China’s exports. Although the port and nearby airports have largely remained open, the slowdown in trucks being unloaded is causing backlog ripples beyond Shanghai. The throttling of the incoming supply of goods means there is less product to load, and things are taking longer to load onto outgoing container ships.

Live Map View of Container Ships Near Shanghai/Ningbo - April 25 at 11:40AM PT

The most recent global supply chain data shows that Asia to Europe Ex-Shanghai is down 70% and Asia to Transpacific exports are down 40% due to the ensuing factory closures and trucker shortages.

As new Covid cases fell for the third consecutive day in Shanghai, China’s focus is now shifting to Beijing where multiple new cases have been reported. The local government has ordered mass testing in 10 out of 17 districts in Beijing.

With new cases detected over the weekend, experts are predicting further lockdowns in China, prompting yet another wave of economic anxiety this week among investors and importers. Multiple other cities in China have also put restrictions in place on the movement of residents as part of the country’s zero-Covid policy.

Local policy varies between city to city, and one of the main challenges is cross-province trucking, as some of the highway connections between cities are blocked. Nucleic acid testing (NAT) is being extended to industrial parks in Suzhou, causing further delays in the transport of goods to ports. Suzhou has carried out large-scale NATs in Taicang, Kunshan and Suzhou Industrial Park, and also announced upgraded COVID-19 prevention and containment measures in parts of the city, encouraging all residents to avoid non-essential movement.

While the central government in China is trying to dynamically update new restrictions, local officials and factories are able to make their own rules. So even if key manufacturers are open for business, the congestion and the delays we are seeing is not likely to improve soon.

Further, International Labor Day also known as International Workers’ Day is celebrated in China on May 1, which is expected to further impact delays as most businesses and factories will be closed.

U.S. ports and importers are bracing for shipping chaos and delays with no end in sight. If China’s “zero-COVID” lockdowns continue, economists are predicting this will further exacerbate global inflation, lead to more inventory stockouts, and could even have a ripple effect all the way to the 2022 holiday shopping season.

With supply chain delays in Shanghai continuing to worsen, experts are predicting a drop in export and import demand out of China, port omissions and more blank sailings in the near future.

Exports by air from Shanghai are led by electronics, including PCs and semiconductors, while ocean freight is led by autoparts, electrical components and consumer durables including furniture. 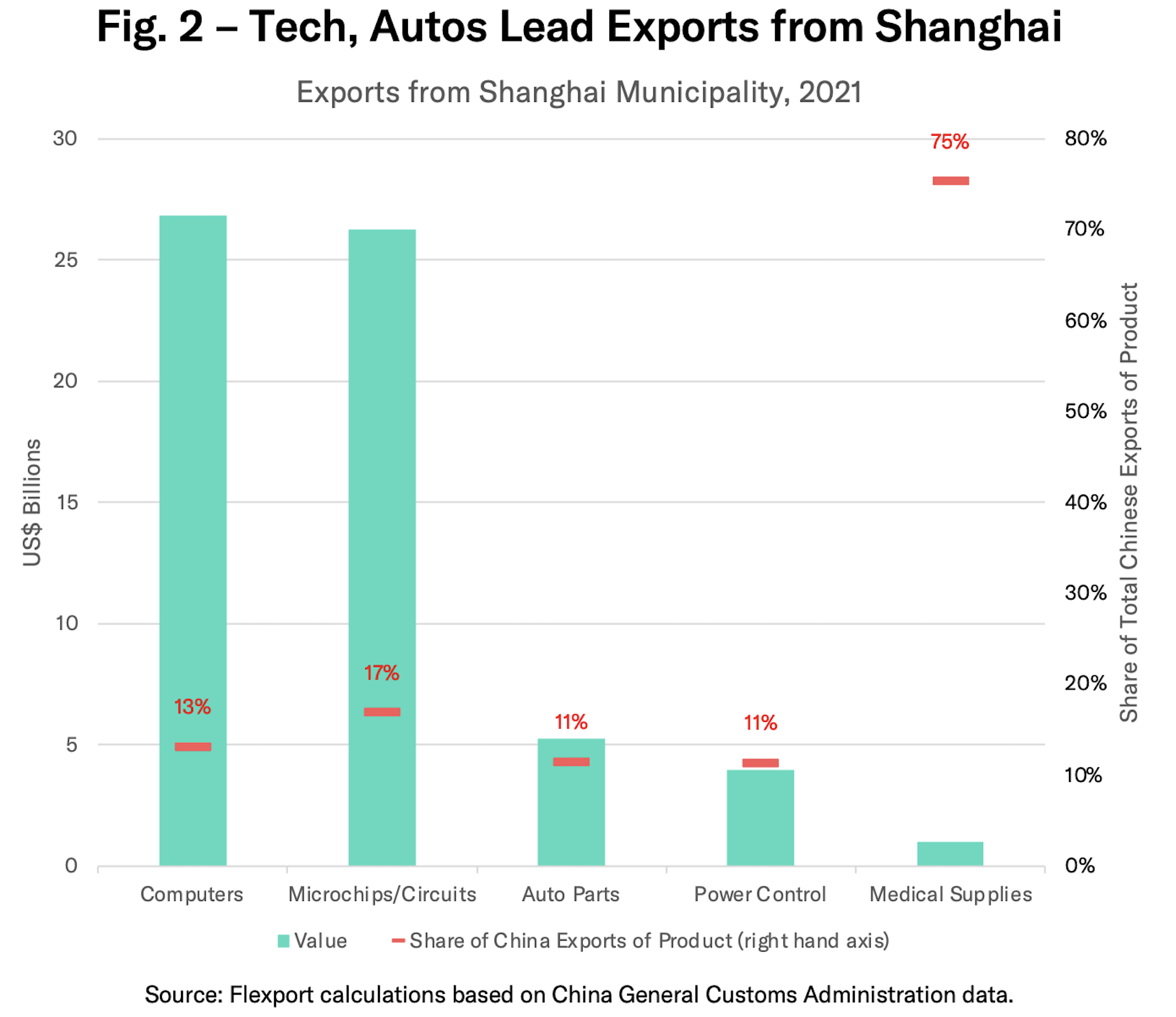 More Chinese cities are implementing Covid-related lock-downs, but by contrast to the initial method followed in Shanghai, many of these follow a new, more flexible approach designed to ensure that critical industries can continue operations.

To that end the government has created a hand-picked list of strategically important companies, across multiple sectors, that will be exempt from some of the lockdown restrictions and can resume production and operations. This may have contributed to some key technology firms continuing their operations.

Covid-related plant closures are just one of the challenges facing the technology industry. One major chip manufacturing equipment producer has indicated that it sees no slowdown in demand for chips of all types and that demand will exceed supply “well into next year.”

The heart of China’s semiconductor manufacturing industry is the Zhangjiang Hi-Tech Park in the Pudong district of Shanghai. While a few companies like Foxconn, Hua Hong, Tesla and Bosch have created “closed-loop” manufacturing systems by isolating workers on-site, it is becoming increasingly difficult to get equipment, raw materials and other supplies from neighboring provinces or from the port to the factory.

As companies face the reality of continued upheaval and unpredictability in supply chains, many of them are starting to reconsider what the ideal operational organization should be. Should brands diversify sourcing of goods from more countries? How can they rethink their product design and manufacturing to use alternative components? How early should they start ordering goods for the 2022 holiday season and will they need to expand their storage capacity in the U.S.?

We’ll have to wait to see how things play out in the coming months.

The situation is dynamic and we will continue to add updates as we get them.

ShareTweetShare
About this author
Trips Reddy