The US West Coast Port Labor Contract Is Up in July

In the past, the triennial negotiations have sometimes resulted in supply chain disruption. Read on to learn how developments could impact logistics this year.

The current contract—an agreement between the International Longshore and Warehouse Union (ILWU) and employer group Pacific Maritime Association (PMA)—is a three-year extension of the prior contract.

Since so much has changed since 2019, when the extension took effect, contract negotiations could be more complex than last time.

The main points for agreement are compensation and port automation, against a backdrop of evolving Covid variants and extreme demand for throughput.

The PMA’s members are cargo carriers, terminal operators, and stevedores along the US West Coast. The ILWU represents dock and warehouse workers on the West Coast of US and Canada, but only the US contract is up for negotiation this year.

That leaves the greatest potential for delays in the ports of Los Angeles/Long Beach, Oakland, and Seattle/Tacoma.

The most recent trade report by the Pacific Merchant Shipping Association reveals these ports handled just over 26 million TEUs in December 2021.

“Additional logistics disruptions, in the wake of Covid, could have profound systemic effects,” says Anders Schulze, Flexport Global Head of Ocean and Trucking. “Last year, approximately 58% of Transpacific Eastbound imports entered the US through West Coast ports, and there’s still a significant backlog of ships at anchor.”

Canadian and US Gulf and East Coast ports could experience delays due to congestion, too, if US West Coast volumes shift. 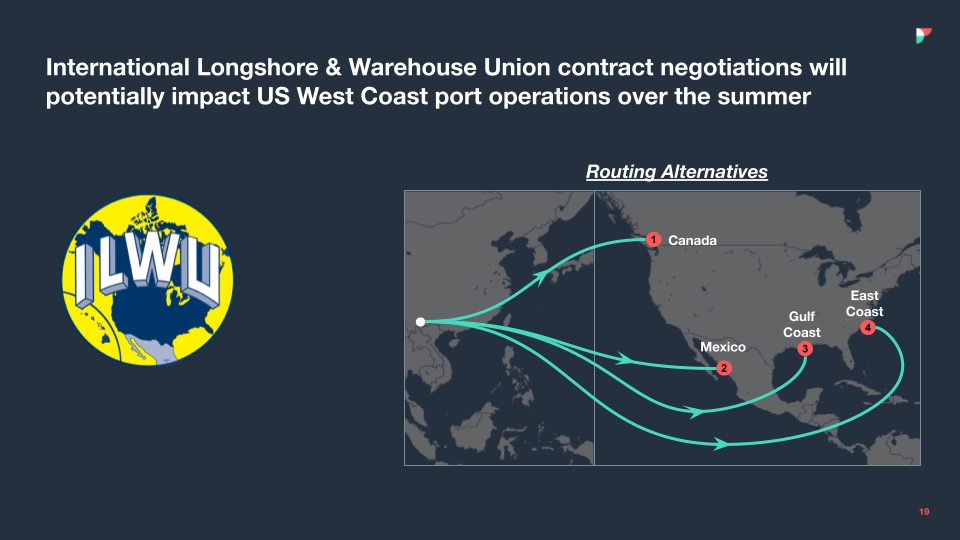 In a recent webinar, Lars Jensen, CEO of Vespucci Maritime, shared his perspective with Flexport.

“ . . . It's very clear that there is zero buffer capacity to divert to Canada or Mexico or the US East Coast . . . That will just move the congestion problems up a notch in those areas.”

Instead, Jensen forecasts, “We're likely going to end up with a deal, where there will be much higher salaries for the port workers, and there will be more of an open door towards automation.”

In reality, though, there is no way to know for sure what will happen.

It’s worth noting that not every contract renewal results in supply chain disruptions.

The last major disruption occurred in 2014 and 2015 and was—up until Covid hit—the most significant and prolonged disruption to US supply chains since the events of September 11, 2001. The resulting shutdowns saw volume into LA/LB decrease by 4% year over year; some of this volume was displaced to the East Coast and Gulf.

By comparison, the current contract extension from 2019 was agreed upon by both sides without disruption.

An extension is easier to negotiate than an entirely new contract, though—and the profound systemic effects of Covid on global supply chains add new issues to parse.

As the situation develops, turn to Flexport for updates. Customers can reach out to their client solutions managers for personalized conversations around potential impacts.

ShareTweetShare
About this author
Flexport Editorial Team
Follow on Twitter
Rethinking Supply Chains: From Cost Center to Growth Engine
How to Optimize Your Supply Chain to Reach Net Zero Emissions