Ocean and air freight rates and trends; customs and trade industry news plus Covid-19 impacts for the week of July 12, 2022. 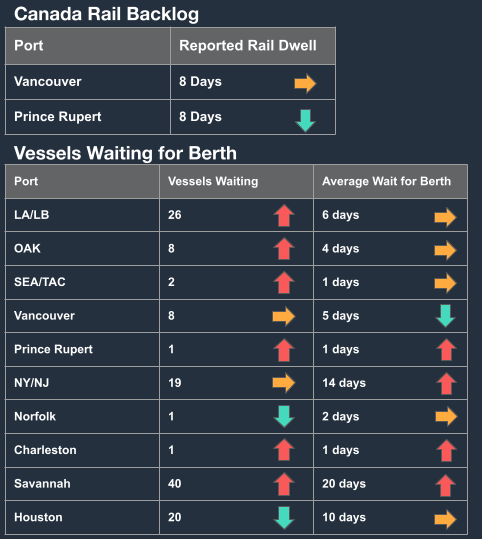 On July 6, the USTR published a Notice and request for comments on the development of a focused trade strategy to combat forced labor. The strategy will identify priorities and establish an action plan for utilizing existing and potential new trade tools to combat forced labor in goods and services. The deadline for submission of written comments is August 5, 2022.

While air transport still remains significantly more expensive than pre-Covid days, FreightWaves reports that the amount of global air shipments in the past two months has declined, a trend consistent with the slower economic growth and seasonal patterns. This trend is most pronounced on the North Atlantic trade lane, where spot rates are 5% lower than in 2020.

The Loadstar reports that ocean carriers are warning of worsening congestion across the west coast port of Vancouver and the US east coast. Intermodal delays due to forest fires in British Columbia have resulted in the spike in container import dwell times, while the US east coast experiences the impact of the coast shift trend.

Riding out a Recession - Prospects for an Economic Downturn This report outlines the key measures used to track a recession—only a few are flashing red currently. Should there be a downturn, the most exposed sectors in terms of PCE spending are high-end electronics, while personal care and apparel will experience less of a downturn.

Steel Yourself For CBAM: Legislation Moves Forward, Coverage Expanded This report builds on earlier research and finds that the greatly expanded scope of the Carbon Border Adjustment Mechanism (CBAM) now accounts for over 11% of EU imports compared to 5% previously after the inclusion of more chemicals and plastics.

Weekly Economic Report: Help Wanted While the economy appears to be contracting and retailers worry about increased inventories, the job market in May and June continued to show strength, a highly unusual contrast historically.