How close is the EU to implementing its carbon border tax? What products are being covered? This report builds on earlier research and finds that the greatly expanded scope of the CBAM now accounts for over 11% of EU imports compared to 5% previously after the inclusion of more chemicals and plastics.

The European Parliament adopted the Carbon Border Adjustment Mechanism (CBAM) on June 22, with several amendments that greatly expanded the products covered, timing, and allowances. These changes were previewed in previous Flexport Research on CBAM which covered the basics of the program as well as future proceedings.

The details of coverage within the previously included sectors have also been updated. Value-added products in the iron/steel and aluminum sectors have been removed from the list of tariff codes included in the CBAM program. These products, normally called articles-i.e. articles of iron or steel-are more complex, value added products.

As explained in prior research, taxes on carbon are marginally less expensive the more value added activity has been added to the product, and removing any taxes on those will likely reinforce the underlying incentives.

Members of the European Parliament (MEPs) extended the legislation to include indirect emissions, for example the electricity used by suppliers in the production of their goods. This will likely increase reporting complexity for importers.

As for timing, the start date remains unchanged, with the rules going into effect at the beginning of 2023. A transitional period extends until 2026, and the MEP’s voted for all allowances for free credits under the EU’s cap and trade system to phase out by 2032, three years earlier than previously planned.

Change in Granularity Comes with Change in Coverage

This means that the legislation covers all imports of those products, as opposed to more specific products defined by a more granular definition.

The breadth of the new products add additional challenges to implementation of CBAM, particularly given the coverage of processed items such as pharmaceutical ingredients (organic chemicals) and consumer-oriented plastics where additional costs may be unwelcome politically.

That may mean the product definitions for plastics and organic chemicals may be narrowed, as was the case for steel and aluminum, before the CBAM actually comes into effect. 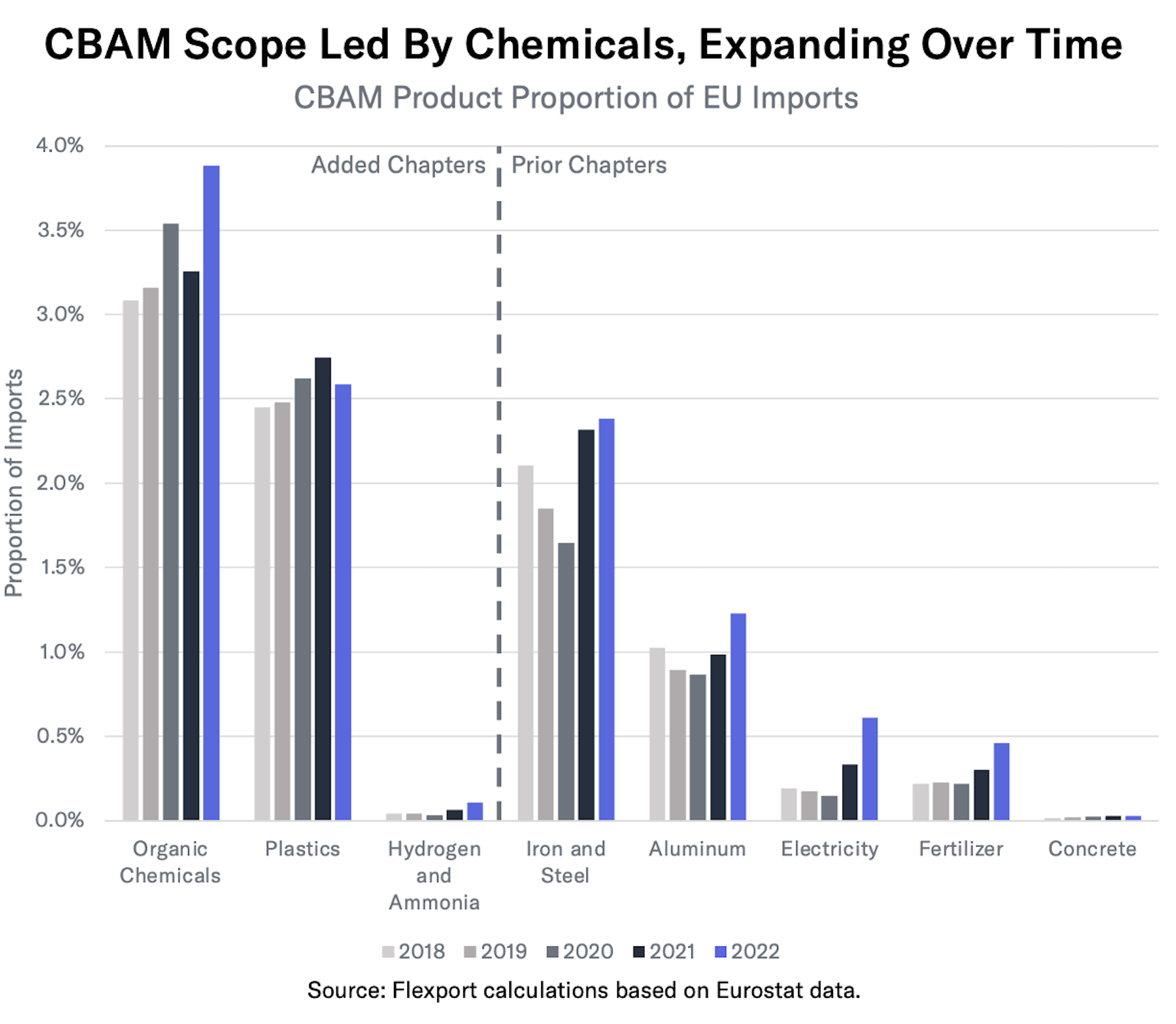 The chart above shows products covered under the recent bill compared to the rest of the package, with organic chemicals and plastics making up 3.9% and 2.6% of EU imports in the first quarter of 2022.

The shorter list of iron and steel products covered fell from 2.7% in the prior version to 2.4% currently, with the amended aluminum products falling from 1.4% to 1.2%. The third addition to the list, hydrogen and two categories of ammonia products, have comparably less imports, accounting for just 0.1% of EU imports in Q1 2022.

As a result, on current definitions, imports covered by the CBAM account for 11.3% of total EU imports in Q1’22 compared to 5.2% under the original program’s coverage.

Conclusion: The draft of CBAM passed by the European Parliament recently advances and expands significantly the products covered by the program. While the start date remains unchanged, the phase out of free allowances has been moved up. The addition of new products, organic chemicals, plastics, hydrogen, and ammonia increased the coverage of the program significantly, increasing from 5.2% of EU imports to 11.3% of EU imports in Q1 2022.