Ocean and air freight rates and trends; customs and trade industry news plus Covid-19 impacts for the week of November 29, 2022. 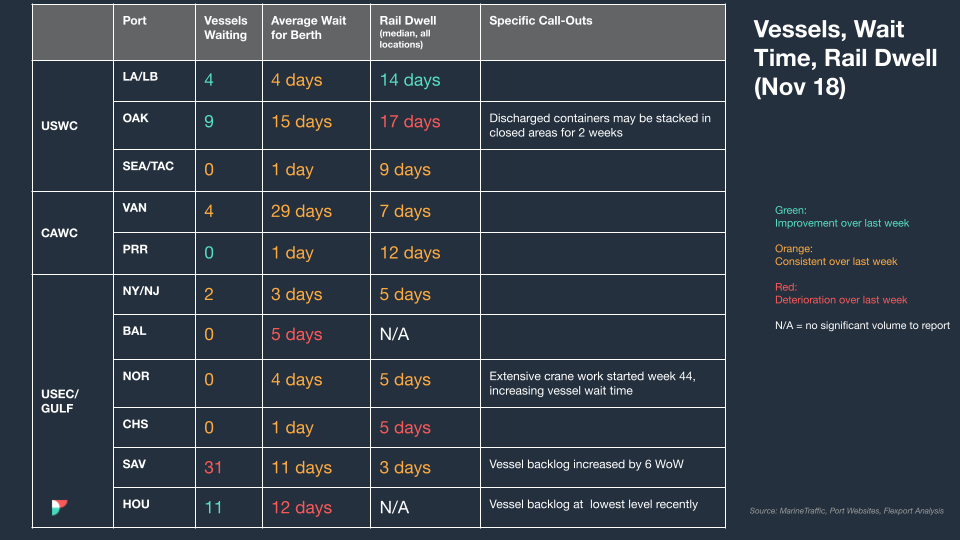 On November 18, U.S. Customs and Border Protection (CBP) announced three new forced labor benefits for CTPAT Trade Compliance members. The new member benefits include: (1) priority review of admissibility packages for shipments detained due to forced labor; (2) the ability to hold intact shipments that would normally be subject to redelivery due to forced labor ties; and (3) allowance to move goods detained due to a Withhold Release Order to a bonded facility while under review. These benefits are provided in exchange for compliance with the recently updated Trade Compliance program forced labor requirements.

Under a new withhold release order (WRO), effective November 23, U.S. Customs and Border Protection will detain imports of raw sugar and sugar-based products produced in the Dominican Republic by Central Romana Corporation Limited. The order is based on information that reasonably indicates the use of forced labor in Central Romana Corporation’s operations. The WRO follows the recent addition of sugarcane from the Dominican Republic to the U.S. Department of Labor’s List of Goods Produced by Child or Forced Labor.

The Office of the U.S. Trade Representative (USTR) has announced that it will extend 81 COVID-related product exclusions in the China Section 301 investigation. The exclusions, previously set to expire on November 30, have been extended through February 28, 2023. In the interim, USTR is continuing to accept public comments through January 17, 2023, as a part of its review of all Section 301 tariffs on imports from China. For more information on how to submit comments, please reach out to advisory@flexport.com.

According to Forbes, an impending railway strike could cripple the United States economy and be particularly debilitating given the strike’s holiday season timing. Many are now calling for Congress to use legislative power and apply the Taft-Hartley Act to force railroad workers back on the job and into a new contract.

Shipping stocks in the crosshairs with protests in China

According to FreightWaves, COVID restrictions and continued struggles to fully reopen production in China are taking a toll on the shipping industry. Shipping stocks, especially ocean shipping stocks, have taken a tumble in recent days after hopes of increasing business from China were halted. Shares of crude-tanker owners Nordic American Tankers (NYSE: NAT) and Euronav (NYSE: EURN), shares of crude- and product-tanker owners International Seaways (NYSE: INSW), and shares of Frontline (NYSE: FRO) all fell over 4% on Monday.

For a large collection of major economies, goods trade dipped from Q2 to Q3. The dip comes after a two-year stretch of trade growth that differed markedly from the decade before and that took trade values to new heights.