Flexport has been tracking and forecasting U.S. consumers’ heightened preference for goods over services throughout the pandemic. Our indicator was designed to signal when there were signs of consumer behavior returning to pre-Covid norms. That signal just went off. 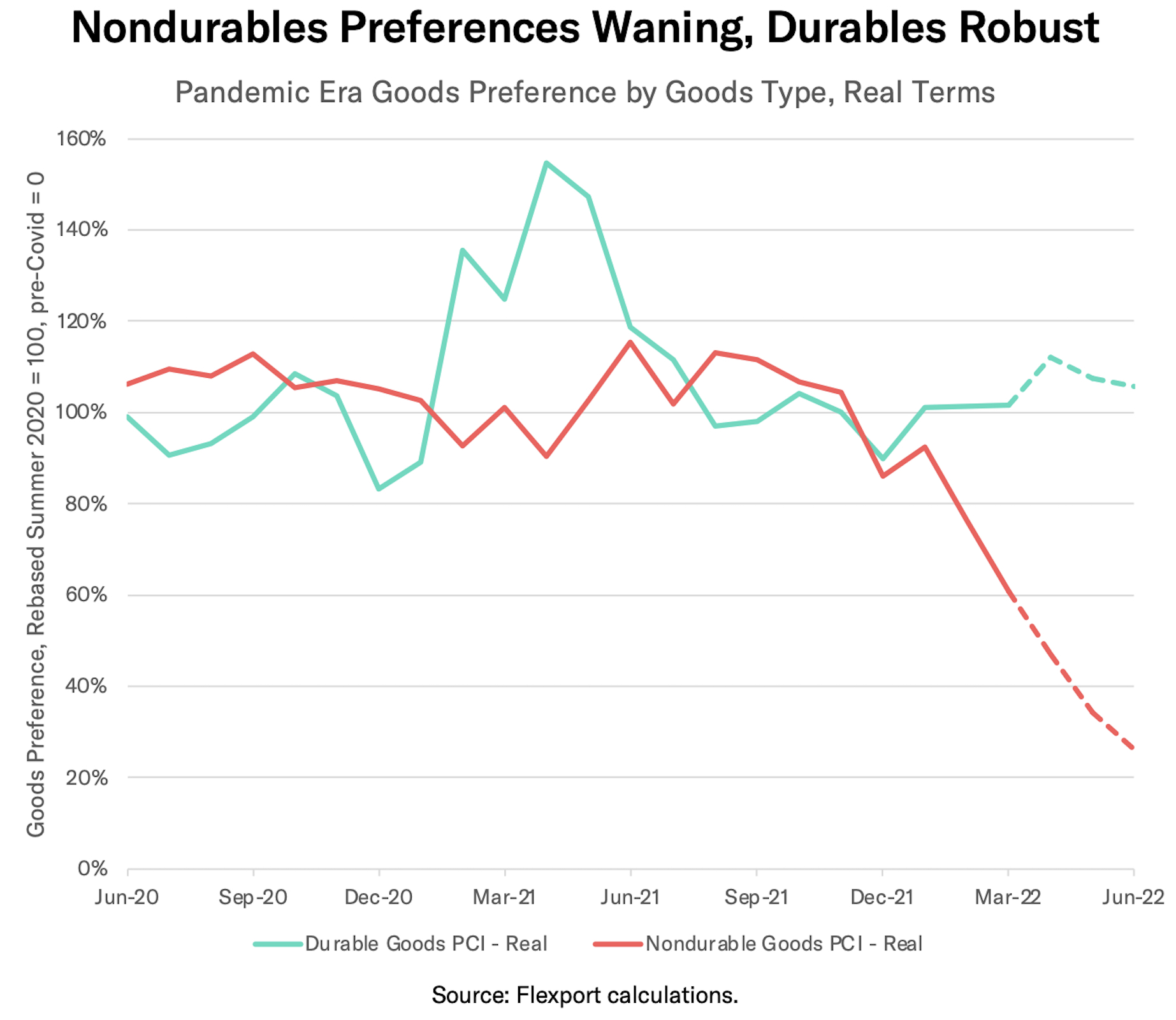 Anyone could see that the Covid-era economy was different from before. But how was it different in quantifiable terms? Could we tell if and when things were to revert back to normal?

With these questions in mind, we developed the optimistically-named “Post-Covid Indicator (PCI).” We focused on the way people in the U.S. spent their money. Specifically, the division between spending on goods and on services had been very stable for years. Then, right at the outset of the pandemic, there was a dramatic shift. The share of consumer spending on goods increased and the share spent on services decreased.

It wasn’t hard to see why that might be. Many services that people enjoyed pre-pandemic – travel, going to the gym, dining at restaurants – became unavailable under pandemic restrictions. Meanwhile, real personal incomes rose, boosted by government fiscal support. The upshot was sharply-elevated goods demand that global supply chains were hard-pressed to meet.

We set out to track this shift in consumption preferences with the PCI. We scaled it so zero would match the pre-Covid norms and 100 would match the elevated goods preference of the summer of 2020. Not only did we track it, we looked for patterns in Flexport data that would let us forecast what would happen next. The idea was to have an alarm bell that would sound if conditions started to return to their pre-pandemic norms.

That alarm bell just sounded, for the first time. In new PCI estimates released today, we find that consumer preferences for non-durable goods, adjusted for inflation, are likely to head back toward pre-Covid levels as we head into this summer.

There are a few reasons for caution with this forecast.

But if you were waiting for an early signal that U.S. consumer behavior might be shifting back, we just got one.

In other research we released a deep-dive into new U.S. sanctions against Russia which focus on capital equipment and the mining industry.

Consumer sentiment dropped sharply in April, according to a University of Michigan survey. It fell to its lowest level since 2013. Over a third of consumers attributed a negative assessment to inflation while longer-term inflation expectations had a median of 3.0%. The Fed’s hopes of bringing down inflation without too much economic pain depend critically on inflation expectations remaining anchored at a moderate level.

China’s industrial production fell by 2.9% year over year in April 2022, down from a 5% increase in March. Automotive and general equipment manufacturing both fell at a double digit rate while apparel, chemicals and food also fell.

U.K. GDP fell by 0.1% in March after no growth in February (a slight downward revision). A leading contributor was a 2.8% decline in wholesale and retail trade.

German economic sentiment improved in May, according to the ZEW index. The Euro Zone version was up as well.

President Biden has launched a wide-ranging plan to tackle price inflation. That may include cutting tariffs on imports from China and that the White House is “looking at what would have the most positive impact.”

The Northern Ireland Protocol covering customs arrangements between the U.K. and EU may prove “not sustainable in its current form” according to Prime Minister Johnson, raising the prospect the U.K. may withdraw from its terms. The EU has already stated it may retaliate, up to and including suspending the wide Trade & Cooperation Agreement.

The World Trade Organization’s push towards an intellectual property waiver for COVID-19 vaccines continues to struggle due to the fine-print on which countries can receive a waiver. Further progress will follow domestic consultations by diplomats with an aim to compete negotiations by the “MC12” meeting on 12-15 June 2022.

Ukraine has cut Russian gas supplies through one of the major pipeline routes. The Russian government also launched sanctions against a number of European companies which will effectively cut supplies via the Yamal pipeline from via Poland and Germany.

The automotive industry is beset by rising material costs which have added to a semiconductor shortage and COVID related supplier closures, leading two of the Japanese automakers to identify cost increases of 1.5x to 2.0x in the 12 months to March 2023 versus March 2022.

Chart of the Week - Every Little Bit Helps 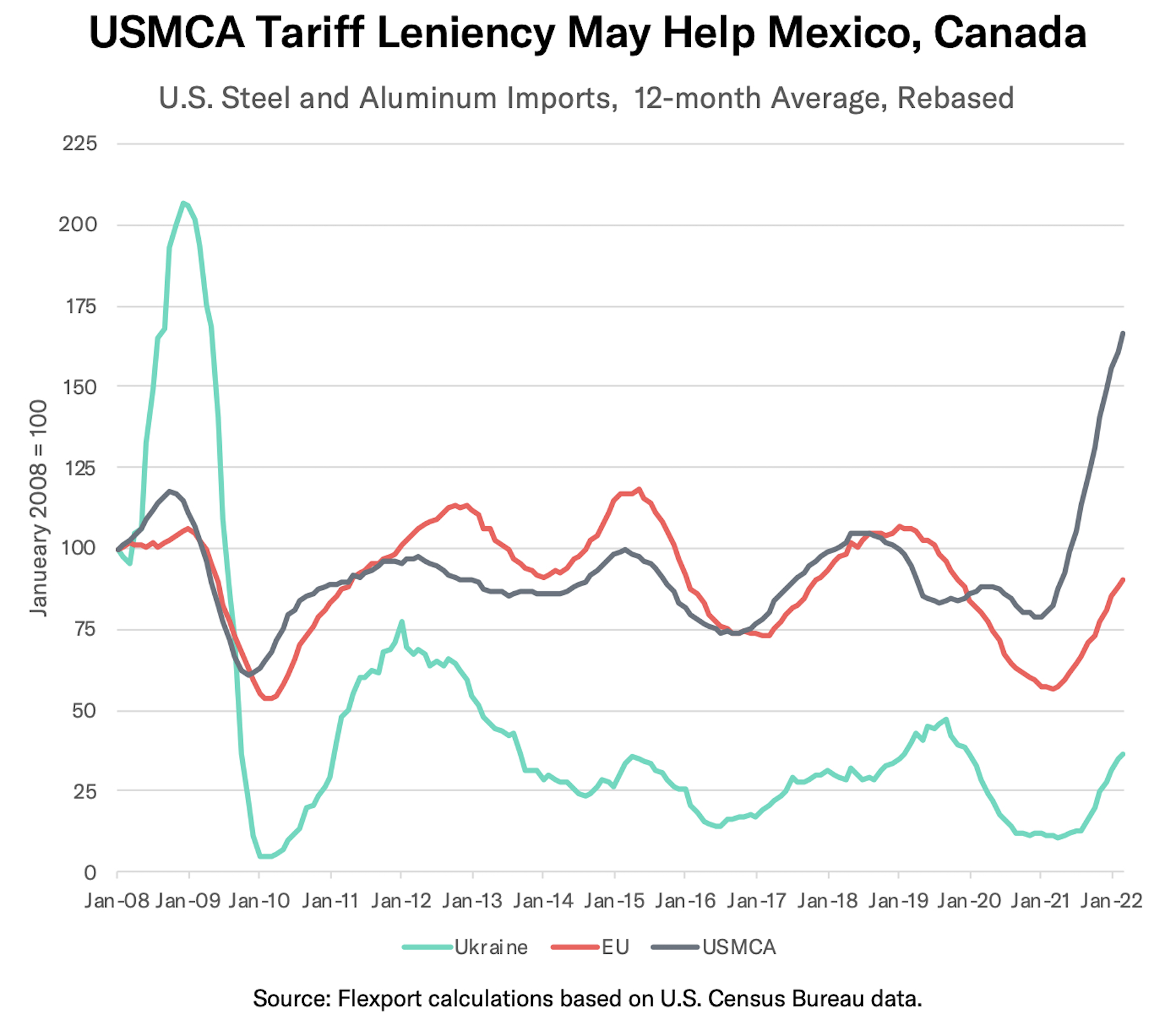 The U.S. has temporarily lifted Section 232 steel and aluminum duties on imports from Ukraine for 12 months. The tariffs were applied by the Trump administration at a rate of 25% on most steel products and 10% for aluminum. Iron and steel exports accounted for just over one-quarter of Ukraine’s exports in 2020. The U.S. accounted for 7% of Ukraine’s steel exports in 2020 (source UN Comtrade).

A surge in steel prices, in part due to the prospect of the conflict, had already pushed U.S. imports of steel and aluminum from Ukraine to $210 million in the 12 months to March 31, 2022.

That equated to 0.3% of U.S. imports versus a peak of 2.4% in 2008. The removal of tariffs, most recently experienced by suppliers from the EU and previously to Canada and Mexico as part of the USMCA trade deal, could boost imports as shown in the chart above.