A kinetic conflict in Ukraine could generate a wide range of challenges for global supply chains. This brief report looks at which products may face the biggest issues. Exports from Ukraine and Russia are led by energy, metals and basic food products. The prospect of conflict, and resulting physical supply interruptions, logistics challenges and sanctions, has already pushed up a wide range of commodity prices.

Recent developments in eastern Europe raises questions about the challenges that are faced by global supply chains.

The decision by the Russian government to send troops to the eastern Ukrainian regions of Donetsk and Luhansk, after officially recognizing the two separatist provinces, combined with a speech from President Putin referring to Ukraine more broadly as part of a historic Russian sphere, raises the prospect of ongoing conflict in the region.

The EU, U.S. and others have so far responded with the threat of sanctions rather than kinetic intervention.

What elements of trade may be affected by conflict in Ukraine?

A kinetic conflict in Ukraine, combined with likely sanctions against Russia by the international community, could cause both physical disturbances to supply chains as well as a reduced ability for international buyers to transact. In turn there’s also likely to be increased commodity prices (see below) which could further exacerbate ongoing, global supply chain inflation. 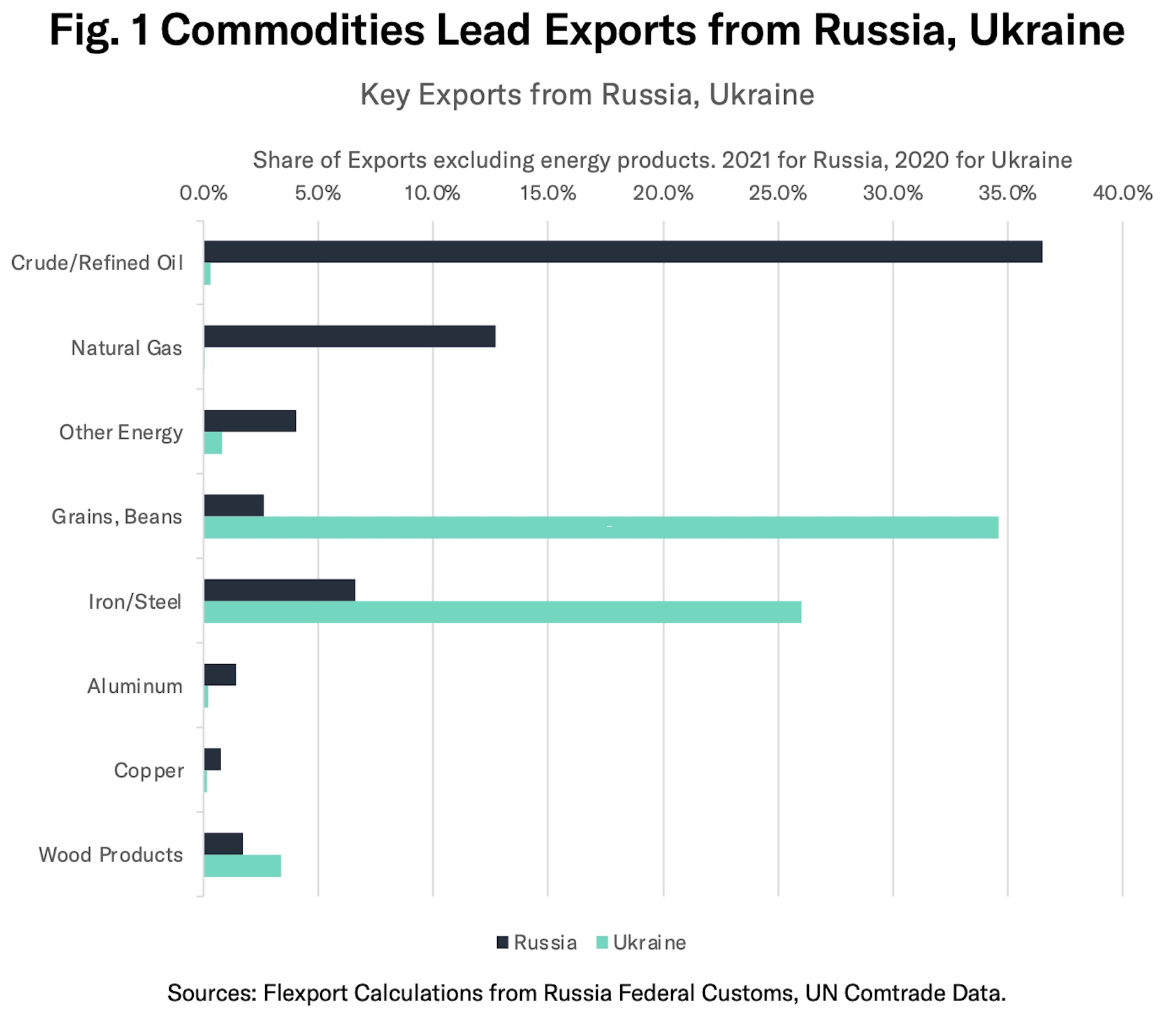 What are the risks to supply chains from the conflict?

There are at least four areas of risk, including but not limited to:

The physical availability of the commodities that are produced and exported from Ukraine and Russia may be interrupted by conflict. Natural gas flows to Europe, discussed in a separate forthcoming report, may prove particularly important given Russia likely accounted for around 46% of EU natural gas imports from outside EU member states in 2020 according to Eurostat data. Much of that is shipped via pipelines that move through Ukraine.

Second, the prospect of conflict has already had a significant impact on global commodity prices. That has likely added to existing supply chain inflation pressures. Crude oil prices have risen to their highest since 2014 after Saudi Arabia stated it would not look to offset any reductions in Russian exports. 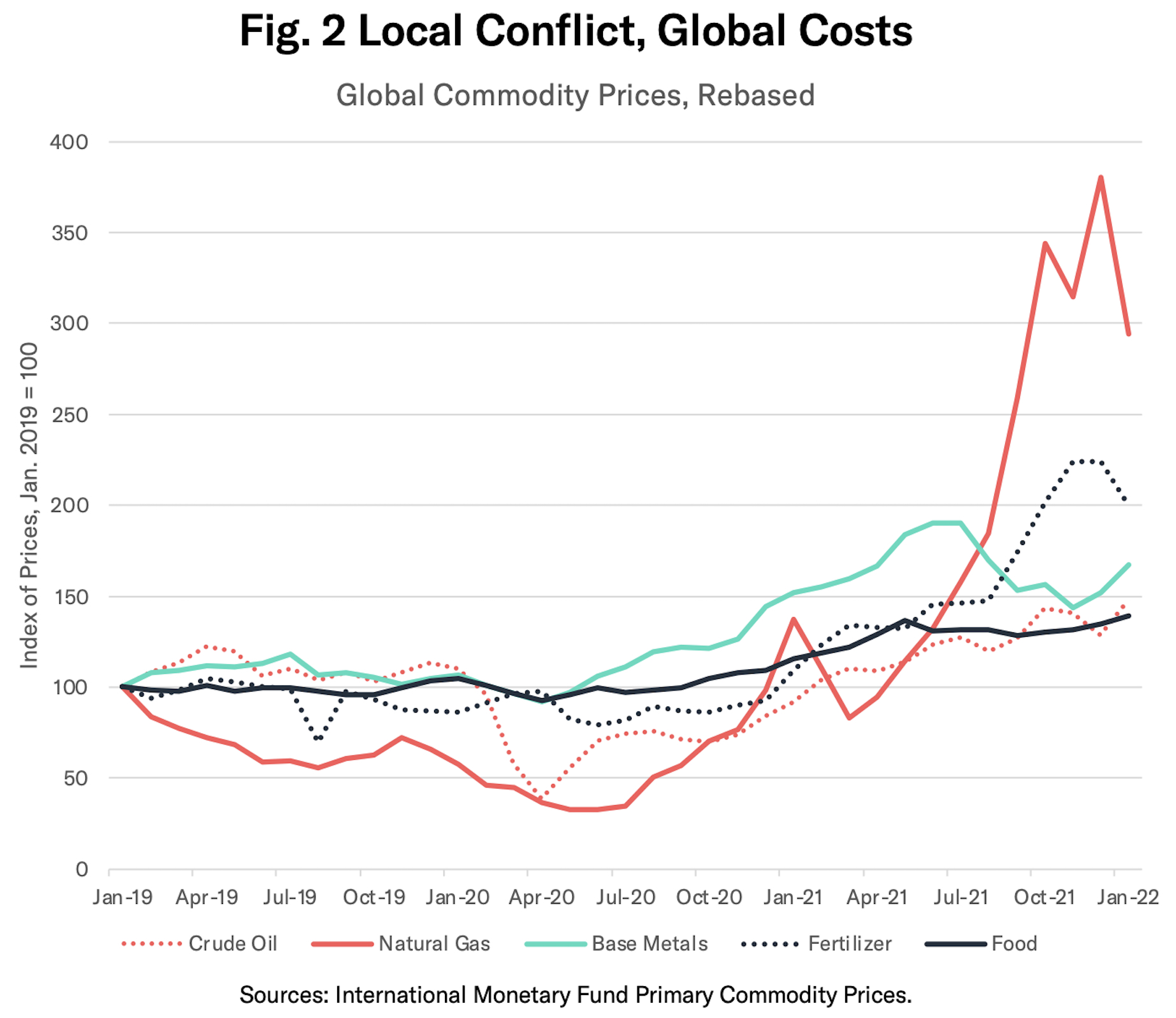 The commodity price increases have been sustained, with IMF data in Figure 2 showing oil prices in the three months to January 2022 were 67.6% higher than the same period a year earlier.

Natural gas prices, which historically have been tied to those of oil due to the nature of long-term gas contracts, have expanded even quicker with a 217% increase over the same period.

Among the major base metals, aluminum prices have grown quickest and reportedly reached 13-year highs. Taking all major base metals together there’s been a 10% increase in the past three months versus the same period of 2021.

Wheat prices are reportedly close to their highest levels since 2013 after an initial run-up in fall 2021 when tensions began to rise and the prospects of an otherwise poor harvest emerged. That pulled total food prices 21.8% higher than a year earlier in the three months to Jan. 31 versus a year earlier.

The third area of risks relate to the physical disruption of logistics networks. The carriage of air freight from Asia to Europe has already started to bypass the area of potential conflict. While the availability of bunker fuel might not be restricted directly, the elevated level of oil prices has reportedly had a knock-on effect for bunker fuel prices.

Insurance costs for shipping in the region may increase or may be coverage-restricted, with the Lloyds Market Association Joint War Risk Committee having already listed Ukrainian and Russian waters in the Black Sea and the Sea of Azov as an area of risk. There’s also the potential risk of cyber-security incursions which may include logistics firms as collateral damage.

Finally there is the potential for widening sanctions which will complicate customs and billing activities, particularly for energy and metals producing firms. In an extreme case, wide parts of the Russian economy may be excluded from the Swift payments system.

For detailed advice and assistance in ensuring compliance with current and emerging regulations please send an email to Flexport’s compliance team.