What sanctions have been applied against Russia so far? Will they be extended? Is there a risk of unintended consequences? This report is part of our ongoing series examining how the conflict in Ukraine is impacting supply chains and provides an overview of the sanctions situation as of March 1, 2022.

The crisis in Ukraine, discussed in Flexport research of February 22nd, has drawn international condemnation and a widening set of sanctions against Russia. This report looks at what sanctions have and have not yet been applied as well as the potential effectiveness of the sanctions. In a separate report we look at corporate supply chain reactions so far.

What is the state of sanctions at present?

Thus far there has been a coordinated approach from the United States, the European Union and the United Kingdom, alongside export powerhouses including Australia, Japan, Singapore and South Korea.

Aside from targeting individual, senior members of the Russian political and economic community, the latest round of sanctions are targeted at finance and technology.

In finance, the removal of access to the international interbank payments settlement mechanism (SWIFT) will: (a) reduce Russian institutions ability to access overseas funds and (b) reduce the ability of supply chain operators to pay for goods from Russia or to receive payment from Russian counterparties.

That comes on top of the U.S. having specifically targeted the top 10 financial institutions, including nearly 90 subsidiaries, as well as cutting access to new debt and equity restrictions for energy, shipping and rail firms. The actions also cover selected Belarusian banks and defense firms.

Western governments have also limited the Russian central bank’s ability to access its substantial foreign reserves. This quickly led to a sharp depreciation of the rouble from 75 to over 114 to the dollar. That will have the effect of making all imported goods more expensive for Russian consumers and companies.

Broadly, the sanctions have yet to cover areas where there may be complications of significant negative implications for non-Russian institutions. Access to commodities has been a particular area of sensitivity.

Aside from access to new financial investments, the natural gas companies have yet to be sanctioned from an operational perspective. The U.S. and Germany also recently applied sanctions to Gazprom’s Nord Stream-2 pipeline operations, though supplies had not yet started.

The U.S. Treasury has also reportedly exempted payments for energy—including oil and natural gas—from the new financial sanctions until June 24, 2022.

The lack of operational actions against Gazprom is perhaps not surprising, given the potential significant challenges for European natural gas supplies and downstream industries, as discussed in prior Flexport research.

As of February 25 the White House had committed to avoiding sanctions on the flow of crude oil from Russia. That hasn’t prevented Canada from acting to block imports however, though it hasn’t imported oil since 2019 from Russia. 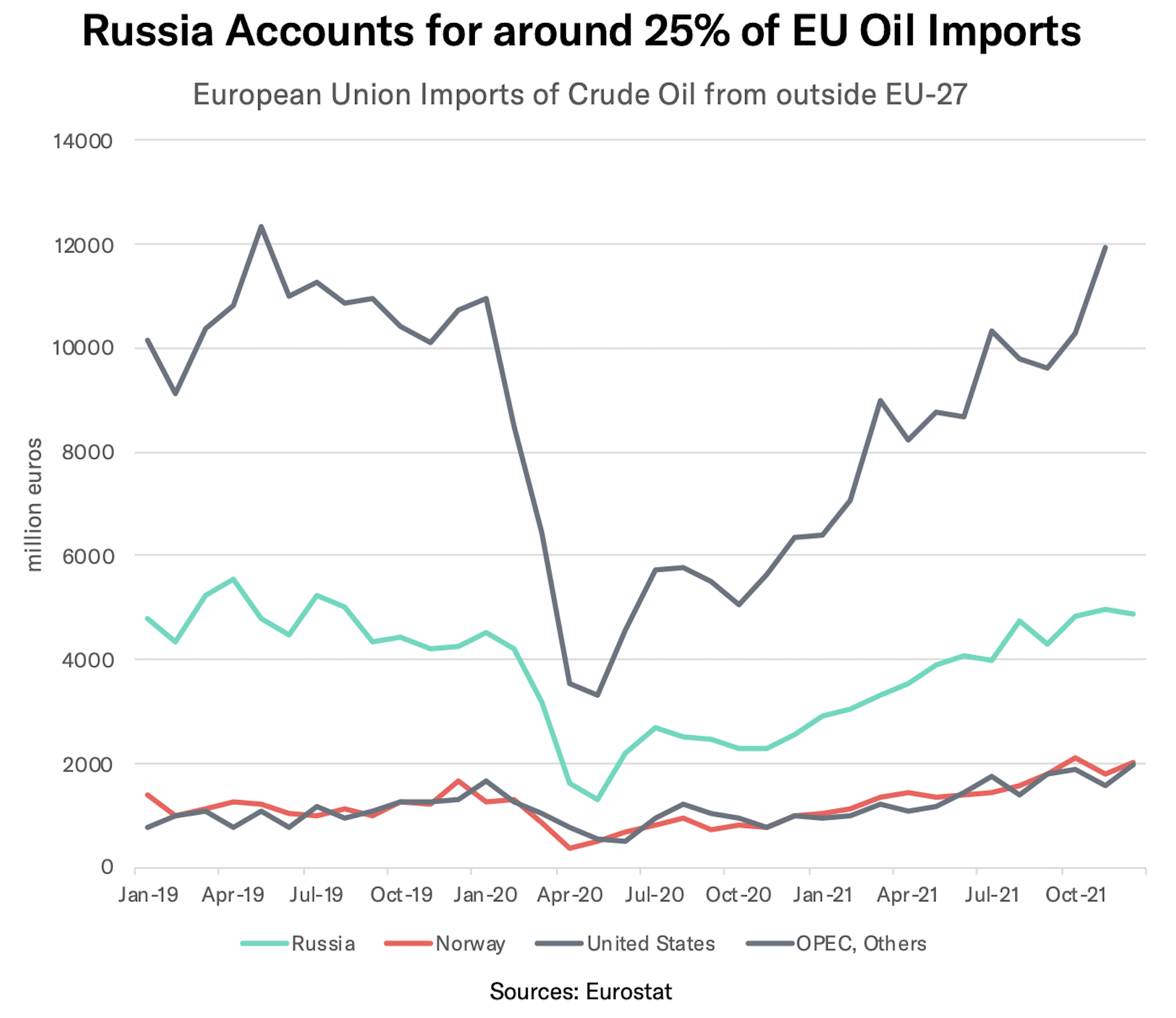 The more significant issue is for shipments to the EU. As shown in the chart above, Russia represented 25% of supplies to the EU in 2021 according to Eurostat. The EU meanwhile accounted for 47% of Russian exports (source UN Comtrade).

Among other major commodities where the world has a higher dependence on Russia, shipments of aluminum have yet to be challenged, though payments are not protected under the exemptions mentioned above. That’s led industry participants to suggest prices may rise further. Russia accounted for 10% of global raw aluminum exports in 2020 (HS 7301, source: UN Comtrade).

Outside specific products there is reportedly a growing push in the United States to withdraw Russia’s access to normalized trade relations. That could be extended to include access to the World Trade Organization’s Most-Favored Nation tariffs, though unanimity looks unlikely.

Will the sanctions be effective? Could they be counterproductive?

With the application of SWIFT-related restrictions the ability of the Russian government and businesses to avoid the impact of sanctions is greatly curtailed. The Central Bank will also struggle to access the $638 billion of reported foreign exchange reserves it holds. Of those reserves 63% are reportedly held outside Russia or China and may therefore not be wholly accessible.

China has remained neutral during the conflict and has stated it “will always stand on the side of peace and justice.” __Access to China__’s alternative payment system may be one option for yuan reserves. Alternative purchasers for Russian products, for example gas sales to China, may offset lost sales to Europe or the U.S. China’s customs agency has reportedly approved the import of Russian wheat though importers of oil are reported to as being more cautious.

There is of course the risk that Russia takes retaliatory export sanctions in natural gas, platinum group metals and aluminum products, as it has already done in air overflight access. Russia continued to supply natural gas throughout the Cold War and a loss of sales could exacerbate the damage to its own economy.

The main area of counterproductivity would come from the impact of higher commodity prices, which have exacerbated the longer-term increase in input costs for supply chains. Thus far industry participants have indicated an expectation that oil and gas will continue to flow.

As of the writing of this report, the OPEC group remains committed to its existing production plans. However, the governments of the United States, Japan and other IEA members plan to release 60 million barrels of oil (4% of their stockpiles) or less than one day of demand from strategic oil and petroleum reserves to mitigate the impact of higher prices.

In conclusion: the sanctions taken against Russia in relation to the war in Ukraine are far-reaching and impact upon both its financial community, the ability of supply chain operators to pay for transactions with Russia and greatly limit exports of high technology goods. Future research will examine the impact on companies and their strategic reactions.