To determine whether the U.S. economy has turned the corner in the fight against inflation, it helps to look at a component that is both central and less volatile than food and energy. The cost of shelter in the U.S. accounts for nearly a third of the consumer price index and looks set to keep rising.

In Focus - Looking Behind the Inflation Story 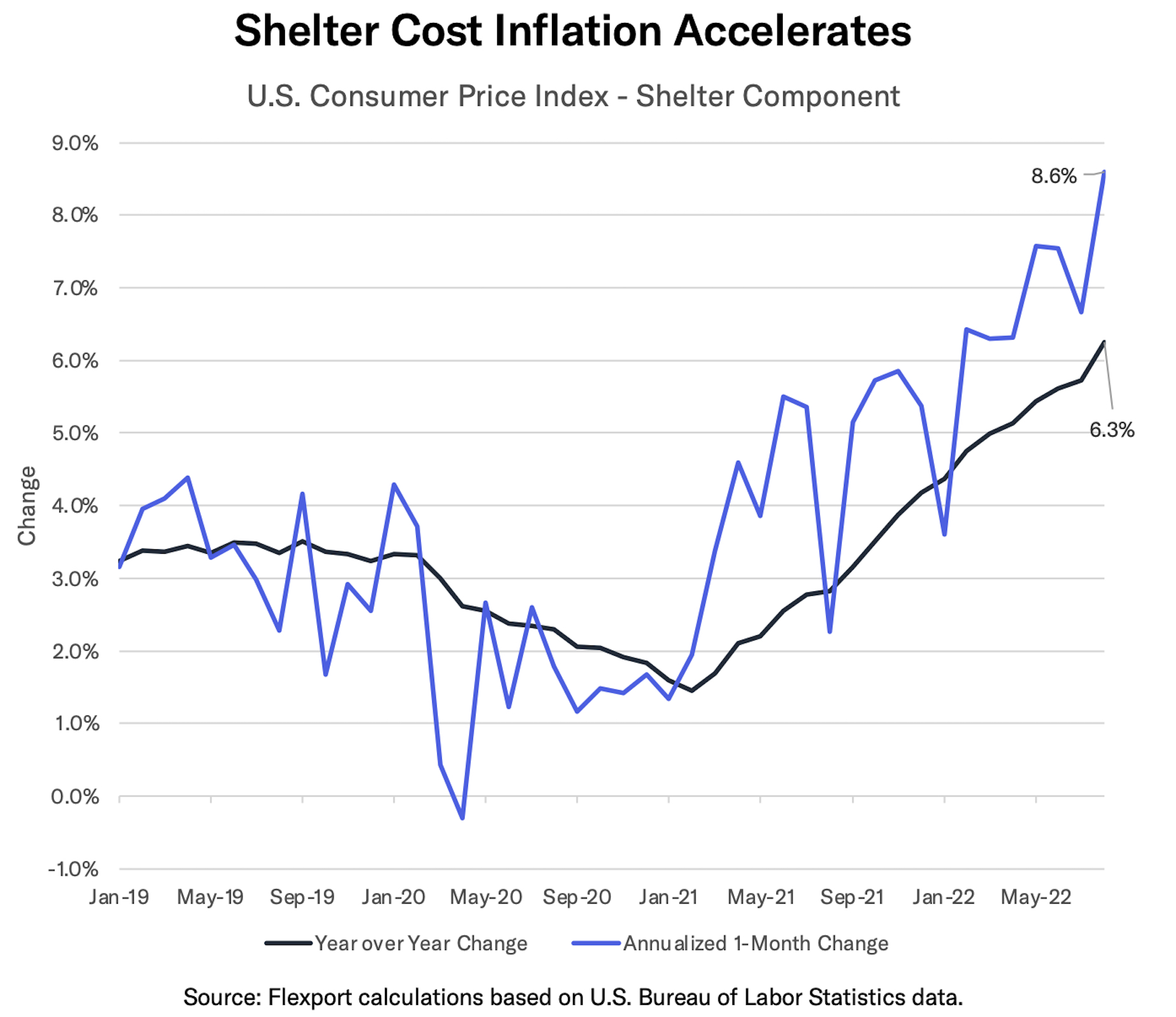 If one wanted to be hopeful about U.S. inflation, one might look at the year-over-year Consumer Price Index numbers across this past summer. For June, the full index rose by 9.1%; for July, 8.5%; for August, 8.3%. While the numbers are much higher than the Fed’s 2% target, one might think that at least we’ve reversed the steady climb dating back to early 2021.

But last week’s CPI release was instead taken as troubling news. Have sympathy for the devil in the details. As noted in the Weekly Economic Report before, the inflation measures bundle together items whose prices can be more or less volatile. It is the less volatile and more reliable ones that have been the most worrisome. In the latest CPI report, that was evident in the “core” measure, which excludes food and energy. That rate was 6.3% in August, up from 5.9% in June and July.

In the chart above, we delve even deeper and look at a single component of CPI: shelter. The first reason to look at shelter is its 32.2% weight in overall CPI. That dwarfs the contribution of the main goods category, with just a 21.2% weight.

The second reason to look at shelter is that the series is not particularly volatile, certainly when compared with energy prices. The chart shows two versions of what has happened with shelter prices. The most popular measure (painted black in the chart above) shows the percentage change in the index over a year earlier. While the 6.3% rate shown in August is lower than overall CPI, it has been climbing steadily and smoothly since early 2021.

The indigo line takes one-month changes and projects them out over a full year. That’s more volatile, but it has also been climbing steadily, and indicates that the latest shelter prices have gone up at an 8.6% rate, even faster than CPI.

Third, there is the satisfaction of sidestepping questions about whether logistics breakdowns or other potentially transient issues are behind price increases.

A fourth and final reason to look at shelter prices is that they can be broken down further and forecast. There are two main components: rental of primary residence (7.2% weight) and owner’s equivalent rent of residence (23.7% weight). For each component, recent research by the Dallas Fed shows that price increases enter into these indices with significant lags. The study finds that each inflation sub-measure is likely to rise until May 2023 before subsiding.

Thus, a highly reliable and significant series is telling us that we have not turned the corner on inflation. Before it relents, the Fed is looking for low inflation, not whether the inflation rate is decreasing. But a deceleration in inflation must come first, and the crucial cost of shelter looks instead like it will accelerate for a while and push the broader index up. For those looking to take hope from recent CPI numbers, you can’t always get what you want.

Recent Flexport research includes two deep dive reports into the inventory strategies of toy manufacturers and apparel retailers. In the case of toy manufacturing, we find a surge in inventories has been driven by a desire to avoid prior years’ peak season stockouts.

For the apparel sector an explosion in inventories has resulted from a mixture of: poor demand forecasting; strategies to mitigate inflation and; front-loading to avoid further logistics disruptions.

We’ve also published a report looking at the importance of rail freight for U.S. logistics networks in the wake of threatened strike action.

U.S. retail sales increased by 0.3% sequentially in August in nominal terms. Much of the improvement was thanks to autos (up 2.8%) and food (0.5% higher). Sales by furniture and electronics stores fell by 0.8%, a fourth straight decline. Non-store retail (mostly e-commerce) dropped by 0.7%, the first decline since March.

U.S. producer price inflation slowed thanks to lower fuel costs. U.S. PPI was 8.7% in August vs. 9.7% in July and compared to a peak of 11.7% in April. Inflation excluding fuel also slowed, to 5.6% from 5.8% in August. That included the first sequential dip in transport and warehousing costs in over a year.

Japan’s exports increased by 22.1% year over year in nominal terms in August, the quickest rate of expansion since August 2021. The fastest growth was in processed fuels, up by 172%. Other commodities also grew, including steel up by 12.5% and chemicals which were 16.3% higher. Semiconductors grew by 8.9%, though that was the slowest rate since March 2021.

EU trade activity jumped 48.0% higher than a year earlier in July. Higher commodity prices helped. That’s shown by imports from Russia and the U.S. (both natural gas suppliers) which increased by 130.1% and 91.1% respectively. It’s worth noting that exports are 6.0% lower than the same period of 2019, including reduced shipments to the U.K. and U.S.

U.K. trade activity expanded by 24.2% year over year in July, including a 34.0% rise in trade with the EU on the back of higher fuel prices. One sign of challenges can be seen in exports outside the EU, which dropped by 10.2% compared to the same period of 2019. A 64% drop in exports of chemicals, as well as reduced aerospace, furniture and clothing exports were to blame.

U.K. GDP increased by 0.2% in July versus June, below the 0.3% expected by economists. Activity in manufacturing was unchanged, while electricity use fell due to higher prices. Wholesale and retail trade activity fell for a third straight month.

The European Commission has proposed a series of policies to cut electricity costs, to be financed with a 140 billion euro windfall tax. The proposals include a 10% cut in electricity use by March 2023, as well as the introduction of a peak power price cap of 180 euros per MWh. – They will be voted on by member states on September 30.

The U.S. Treasury has provided more details of plans to cap the price of Russian oil exports, part of a range of sanctions announced earlier in the year. The shipping of the Russian crude oil on G7-owned, flagged or insured vessels will be banned from December 5, 2022 unless contracts covering the oil are set below an as-yet-undefined price.

The South Korean government has stated that exports of memory chips have fallen by 26.0% year over year in August. That follows a wider slowdown in South Korean shipments of semiconductors and other computing devices.

U.S. steelmakers are starting to notice lower demand. One has noted it has “adjusted our integrated steelmaking operating footprint,” by idling facilities, to reflect “market headwinds that have accelerated” during Q3’22. Another has similarly cited “reduced shipping volumes, particularly at our sheet and plate mills,” but expects strong sales from other products.

One of the U.K.’s largest fertilizer producers has halted production “on a temporary basis” due to high fuel prices. That’s having a knock-on effect on buyers of CO2, a by-product of fertilizer production, including food packaging and beverage producers.

A major European home appliance maker has stated that sales “decreased at a significantly accelerated pace,” in Q3’22 versus Q2’22, “driven by the impact of high inflation on consumer durables purchases.” It has also noted that “market demand for 2023 is expected to continue to be weak.” Notably, U.S. imports of home appliances fell by 8.5% year over year in July.

Chart of the Week - Empty Lots 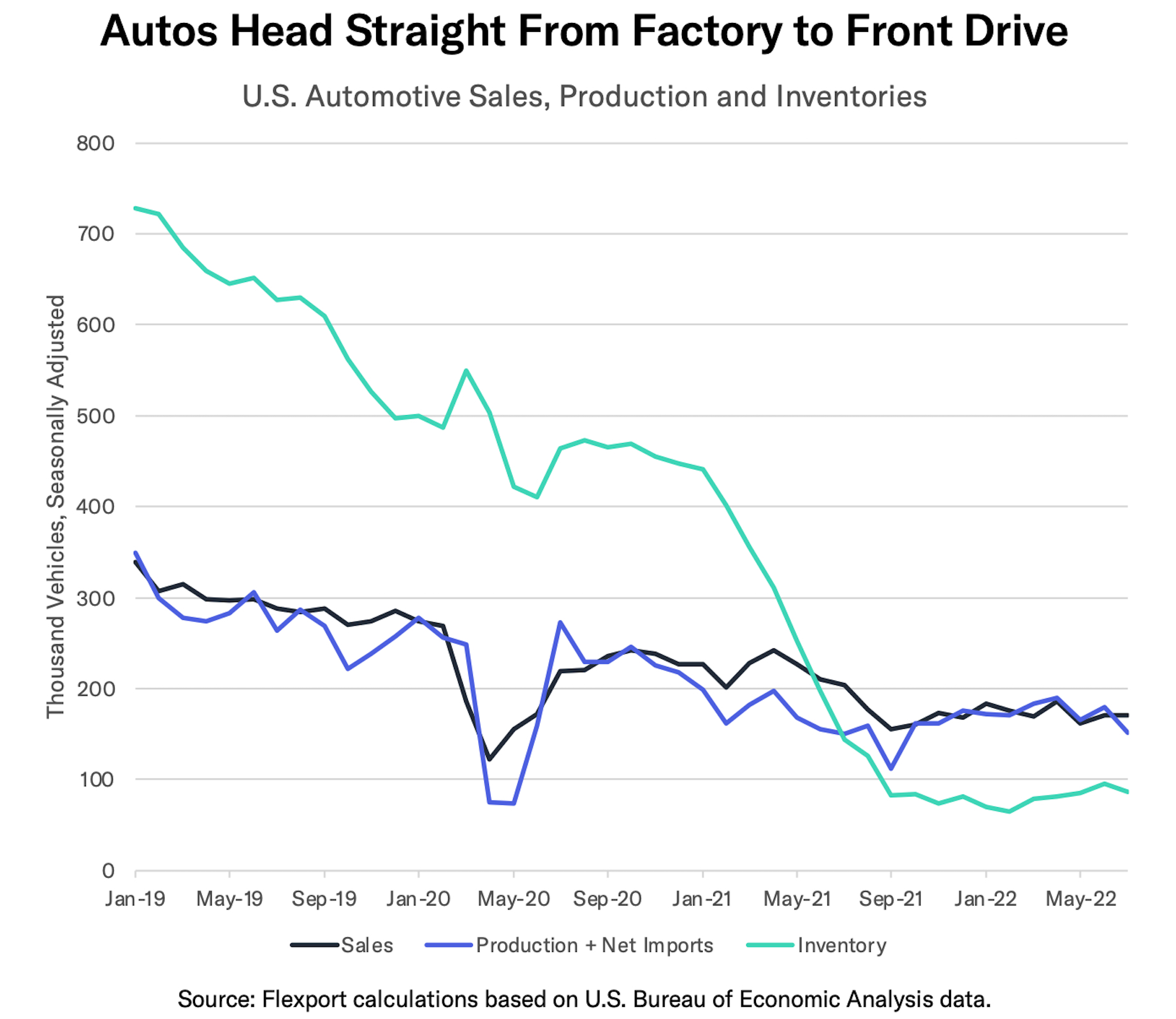 The Detroit Auto Show, held this week, provides a look-ahead for car makers’ future production plans. In the meantime, however, the hangover of pandemic era disruptions to automotive supply chains continues. The chart above compares U.S. monthly auto sales (black line) to domestic production plus net imports (indigo line), while inventories are represented by the green line.

A series of production challenges, including the availability of semiconductors, meant that production lagged sales for most of 2020 and 2021. That resulted in a drop in inventories from around 450,000 vehicles in December 2020 to 82,000 in September 2021. Since then, sales have trended inline with production and inventories have been largely unchanged.

The supply of vehicles has yet to recover. As of July, production plus net imports was 151,100 vehicles, the second lowest since the pandemic and compared to 263,500 vehicles in July 2019. Absent a marked recovery in production or slump in sales, the tight availability of autos looks set to continue for several months.

A final point: the level of inventories had already been falling before the pandemic, from a plateau of around 1.3 million vehicles in 2013-2017. That may suggest the industry had already been looking for supply chain efficiency improvements.