U.S. imports were down from June to July, while exports rose. For imports, this continues a pullback that dates to March 2022. Looking back to the onset of the pandemic or even the year before, though, imports have shown substantial growth. 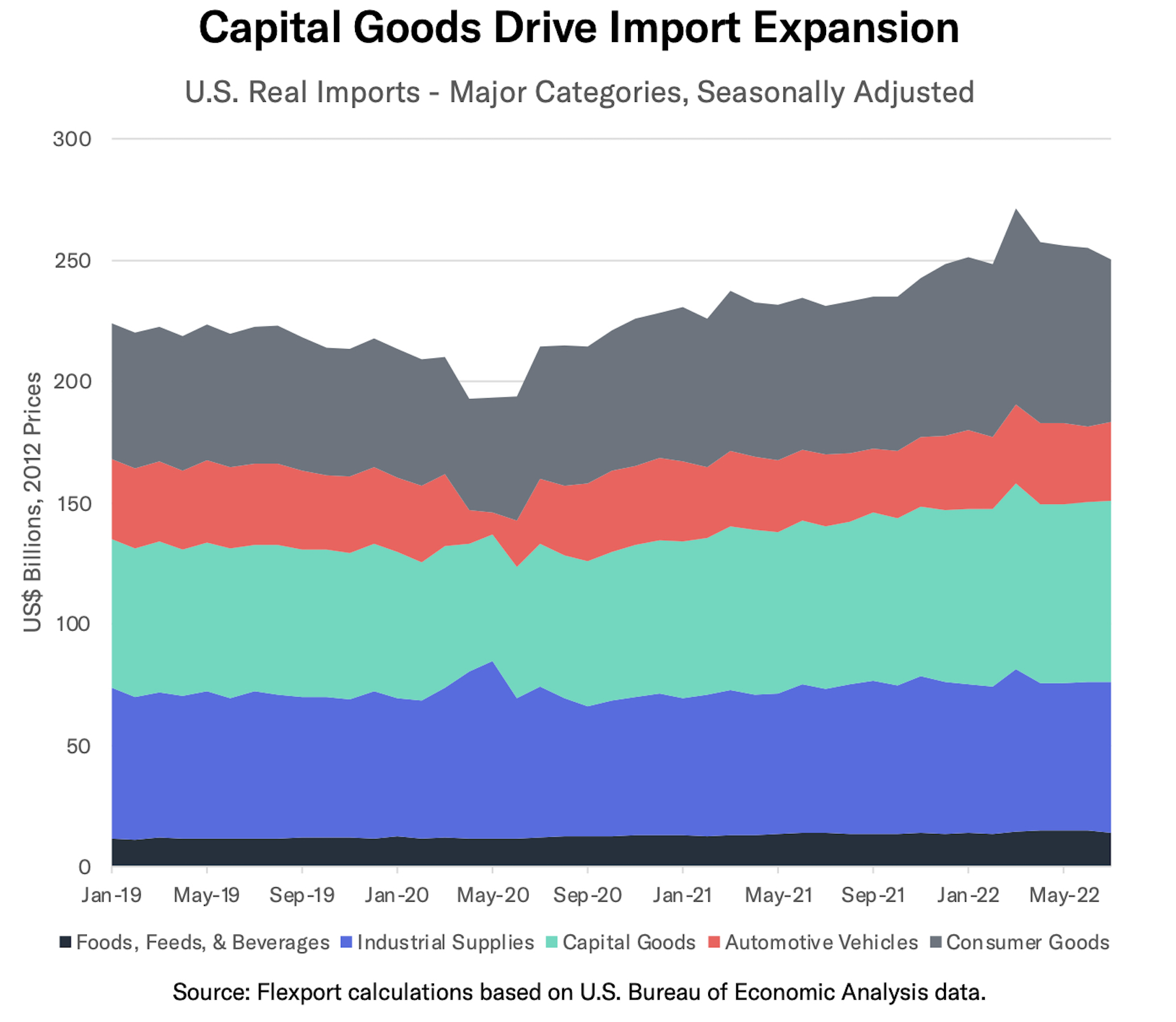 The expected patterns emerge if one takes a longer view. Comparing January-July of 2022 with the same period in 2021, real imports are up 9.7% while real exports are up only 5.3%. And, in levels, the United States imported 76.5% more than it exported in the first seven months of this year. So one lesson is that these numbers can be volatile on a monthly basis.

The chart provides an even broader perspective on how real U.S. imports have grown, dating back to the beginning of 2019 to provide a pre-pandemic comparison. It also allows an examination of the different major component categories.

Just looking at the top line of the graph, one can see that the pandemic was a time of substantial import growth. Real imports, on a customs basis, grew 18.8% from February 2020 to July 2022. Capital goods led that growth, with a 31.4% increase over the time period. Consumer goods were close behind with 28.0% growth.

The scale of import growth in this data does not fit well with stories in which U.S. shortages were driven by supply chain breakdowns. It’s far more consistent with a story of a substantial demand surge creating congestion problems.

If we look across the entire time span on the chart, the biggest increase, from the beginning of the chart in January 2019 to July 2022, was in capital goods, up 22.4% total, or an annualized 8.1% growth rate. Over that time period, the most volatile category, measured by standard deviation, has been consumer goods.

In terms of explaining the fall in real imports since March 2022, the biggest contributor by far has been consumer goods, which fell by 17.4%. The next biggest drop was in industrial supplies, the category that includes petroleum products, at 6.8%.

What comes next? Watch this week for the latest Flexport Trade Activity Forecast, which uses Flexport data to craft predictions for imports and exports for these major categories over the months to come.

Recent Flexport research includes a deep-dive into the state of corporate inventories. We show that inventories in most sectors, as a proportion of sales, are now at or above pre-pandemic levels. There are many reasons for why that has occurred, ranging from poor forecasting to deliberate actions to avoid seasonal shortages. There are also a wide range of strategies for dealing with the excess inventories being deployed.

EU retail sales increased by 0.3% in July versus June on a real (inflation adjusted), seasonally adjusted basis. Excluding food and fuel, sales dipped by 0.2%, a second monthly decline. Online sales actually improved by 3.6% and were above the year-earlier figure for the first time since November.

Canada’s merchandise exports fell by 2.8% sequentially in July, the first dip since December. That was led by a 10.8% drop in shipments to the EU and a 23.8% slump in exports to the U.K. A decline in commodity prices contributed, with total exports of energy and metals down by 4.2% and 8.4% respectively. However, exports of consumer goods also fell by 14.3%.

The European Central Bank increased its main repo rate by a record high 75 basis points to 1.25%. ECB President Christine Lagarde struck a hawkish tone, noting “We expect to raise interest rates further, because inflation remains far too high and is likely to stay above our target for an extended period.”

The U.S. government has released the implementation details for over $50 billion of support for investment in semiconductor manufacturing. The “CHIPS for America” program will only provide long-term relief for supply chains. Initial payments will be made next spring while typical build times for new semiconductor fabs are measured in years, not months.

The U.K. government has announced a lower cap on electricity and gas payments for consumers, equivalent to 1,000 pounds ($1,160) per year per household. The shortfall in payments to energy companies will be covered by government borrowing.

Fourteen countries agreed to move forward with the Biden administration’s Indo-Pacific Economic Framework (IPEF) initiative this week. All but India agreed to pillars on trade, supply chains, clean economy, and fair economy; India opted out of trade talks. The Biden administration does not have negotiating authority from Congress to engage in a significant, traditional market-opening deal.

Consultant IDC expects PC and tablet shipments to drop by 12.8% and 6.8% respectively in 2022 with a further 2.6% decline in the combined total “as consumer demand has slowed” and “enterprise demand gets pushed out due to worsening macroeconomic conditions.”

U.S. sales of cars and light trucks improved by 3.3% year over year on a non-seasonally adjusted basis in August, the first increase on that basis since July 2021. Yet, sales are still 19.3% below August 2019’s level. While domestic production has improved, the inventory-to-sale ratio of 0.51x remains well below the 2.4x prevailing before the pandemic.

Power and natural gas markets continue to be reshaped by the conflict. The EU accounted for a record 60% of U.S. LNG exports in August. Russia’s Gazprom has started to accept payments in yuan for sales to China.

Warehouse inventories of aluminum have increased from their historic lows. That reportedly reflects traders’ expectations of falling demand after an extended period of reduced supply. The latter has reflected elevated electricity prices leading producers in eastern Europe to cut supplies. Steel plants in Spain and Germany have also been closed in the past week in response to higher energy costs.

Global air freight handling fell by 9.7% year over year in July, according to IATA data, leaving it 3.0% below July 2019’s level. Handling has fallen on a year-over-year basis every month since March. IATA blames that on COVID-19 related shutdowns, “infrastructure and labor supply constraints,” and the conflict in Ukraine. 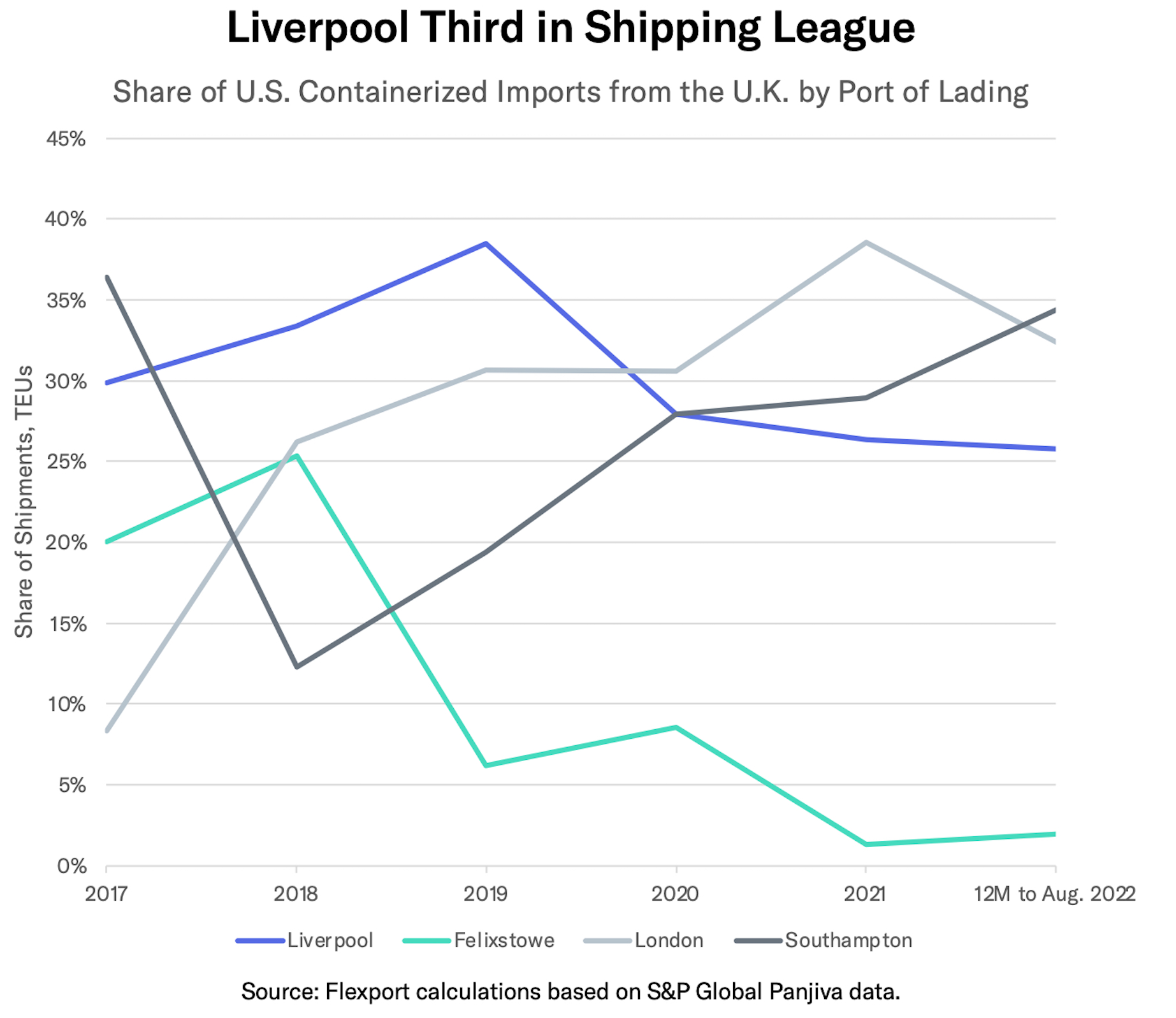 Dockworkers at the Port of Liverpool have confirmed they will strike from September 19 to October 3, excluding the day of Queen Elizabeth II’s funeral. That follows the recent strike at Felixstowe and is also about pay and conditions in the current, high inflationary environment.

The impact on inbound, containerized logistics from a strike at Liverpool may be less than Felixstowe’s. Liverpool accounted for 12% of U.K. container freight imports in 2021, compared to 44% at Felixstowe.

It might, however, have a bigger impact on outbound logistics, particularly on Transatlantic shipping lanes. The chart above shows the mix of U.S. imports of containerized freight from the U.K. by port. In the 12 months to August 31, Liverpool accounted for 26% of the total, while London represented 32% and Southampton 34%. Felixstowe’s share dropped in 2018 and 2021 as carriers realigned their service schedules.

The leading products, by volume, shipped from Liverpool to the U.S. include non-perishable food and beverages, medical supplies and cosmetics.