The October jobs numbers were tamer than some earlier months, but showed a labor market that’s still tight. The reasonably smooth movements in aggregate employment numbers conceals a lot of tumult within and across specific sectors. 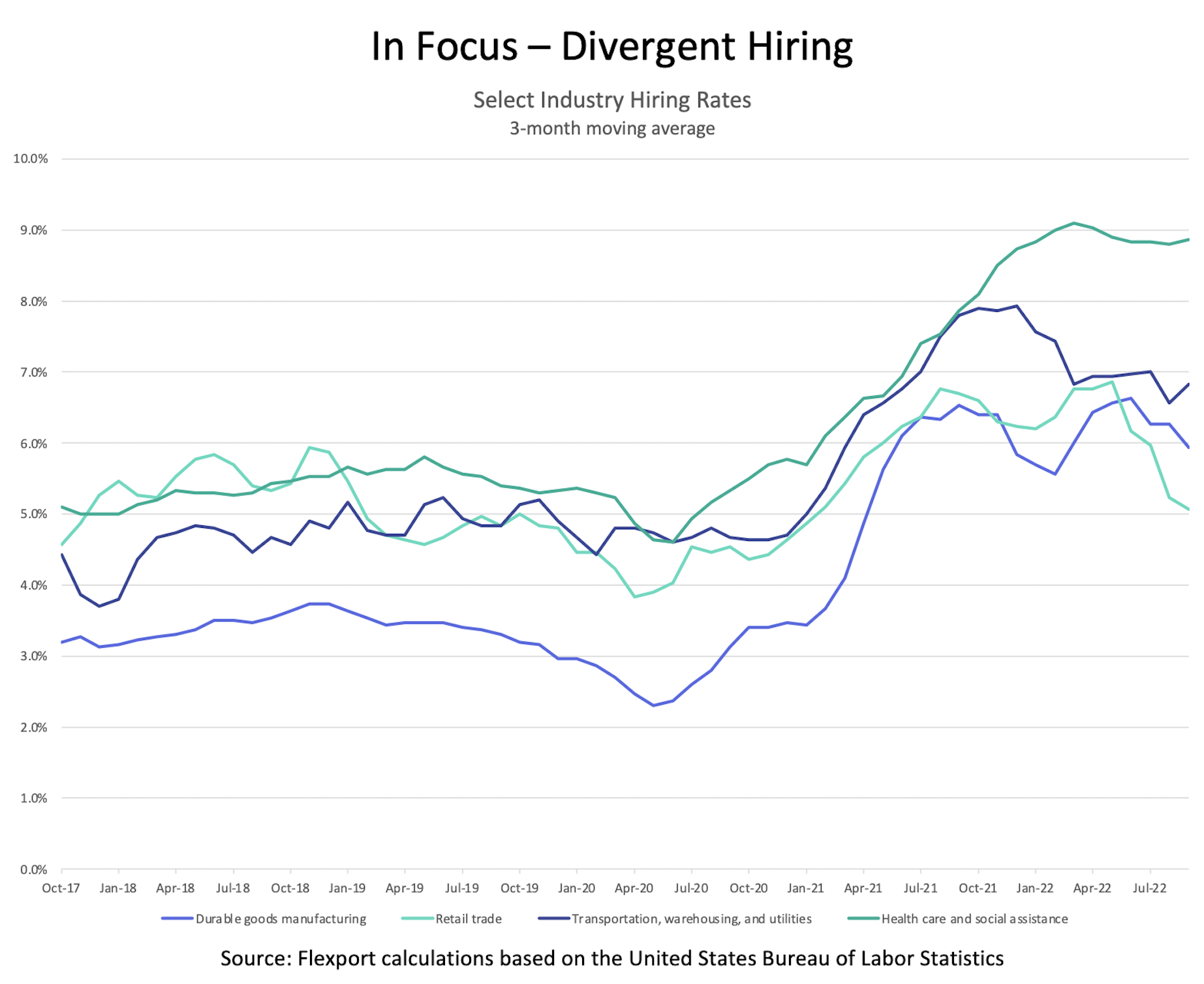 This past week the big story was jobs. The BLS reported that the US economy created 261K net new jobs in October, while the unemployment rate nudged up to 3.7%. That monthly job creation was below the monthly average for 2022 (407K), which was, in turn, below the average for 2021 (562K). Some of the other useful indicators for labor market strength, in particular labor force participation and the employment-population ratio, each inched down by a tenth of a percentage point.

The numbers depicted a labor market that is not showing quite the strength it was earlier, but that remains reasonably strong. Beneath the aggregate numbers lies a lot of variation between different parts of the economy; it’s not hard to find examples of surge or downturn.

There were certainly prominent tales of job loss bouncing around this week, particularly within the tech sector. Yet both the recent monthly job numbers, described above, as well as more frequent indicators such as first-time unemployment claims show strength. The UI number this past week (217K) was below the four-week moving average and below where it was at the start of the year.

To some extent, this has always been an issue. When we focus on a headline number like 261K jobs in October, that is the difference between a very large number of jobs gained and lost. Detail from the Job Openings and Labor Turnover Survey (JOLTS) shows, for September, that there were 6.1m hires and 5.7m separations. If you’re trying to put Twitter job cuts in perspective, it is this much larger gross number that should be used for comparison, not the smaller net figure.

Even though it’s normal to have a decent amount of churn in the US labor market, things have been even more tumultuous in the wake of the pandemic, as different sectors of the economy have risen and fallen. The chart tracks industry hiring rates for a selection of four sectors: durable goods manufacturing; retail trade; transportation, warehousing, and utilities; and health care and social assistance.

The chart shows, first, that hiring rates rose significantly in these sectors above the years preceding the pandemic. Second, these series are jumpy, so it’s unwise to get too excited about one month’s news. In fact, the series were so jumpy that they had to be smoothed with 3-month moving averages, so as not to look like scribbles. Third, the lines jump around significantly more after March of 2020, with standard deviations from 2.2 to 7.5 times as high as in the pre-pandemic part of the chart. Finally, we see that a single recent trend is very hard to discern, at least from these four sectors. Retail trade seems to be dropping rapidly, while health care and social assistance is as strong as ever.

The October job numbers showed continuing economy-wide strength in the labor market, but that surface calm conceals a lot of turbulence underneath. The aggregate labor market tightness will be a continuing source of concern for inflation.

Chinese exports unexpectedly contracted for the first time since May 2020. In the year to October, exports declined by 0.3%. Year-over-year imports fell by 0.7% in October.

Euro Area inflation rose to 10.7% in October, according to an EU flash estimate, up from 9.9% in September. Energy prices were the biggest contributor. Excluding food and energy, the core figure was 6.4% in October, though the figure has been steadily increasing each month.

German manufacturing slowed, according to S&P Global’s October Purchasing Managers’ Index (PMI). The measure dropped from 47.8 in September to 45.1 in October, its lowest level since May 2020.

US Unit Labor Costs, which balance rising compensation costs against changes in productivity, increased by 3.5% in Q3 of 2022 and were up 6.1% over the last four quarters.

Separate data from the BLS Employment Situation report for October showed that average hourly earnings had risen by 0.4% for the month and 4.7% over the last year.

The US Federal Reserve raised rates by 75 basis points (0.75 percentage points) to 3.75-4.00%. The vote was unanimous and Chairman Powell cited an “extremely tight” labor market and inflation “well above our longer-run goal of 2 percent.” He also said that the ongoing rate rises are likely to continue to a level that is “higher than previously expected.”

The Bank of England also raised rates by 75bp in pursuit of a 2% inflation target, albeit to a lower level (3%) and with some limited dissent from committee members who wanted to raise more slowly. The Monetary Policy Committee predicted continued inflation, economic contraction, and further rate hikes, though it anticipated peak policy rates lower than currently priced into financial markets.

The US Inflation Reduction Act violates WTO rules, according to a European Union complaint. The controversy centers around tax credits and subsidies for domestic production of green technology, which the EU asserts violates trade rules against discriminatory domestic content requirements.