What does comparative advantage look like in practice? How are costs shifting across key supply chain sectors and countries? The latest report covers data for Q1 2022. It shows the most rapid inflation in the automotive components and the electronic components sectors where a shortage of semiconductors and commodity price inflation linked to the conflict in Ukraine have boosted costs. There is evidence that less multisourcing of furniture and apparel has occurred in Q1’22 than in Q1’21.

The Methodology: Flexport’s Southeast Asia Sectoral Cost Indices (SEASCI) provides a comparison of the wholesale cost of US imports of a range of products including apparel, electronics, furniture and automotive components from China and selected Southeast Asian countries. Calculations are based on identical SKUs imported from each country available in the Flexport database on a consistent quarter-to-quarter basis. While coverage may therefore change from quarter-to-quarter, our methodology is meant to minimize composition effects.

The cost inflation that has beset consumers in North America has not been present in all sectors or all supply origins. The cost indices for the Apparel sector have diverged, with prices for imports from mainland China down by 1.1% sequentially and by 5.2% year over year in Q1’22. Prices for imports from Thailand and Vietnam meanwhile have increased modestly. 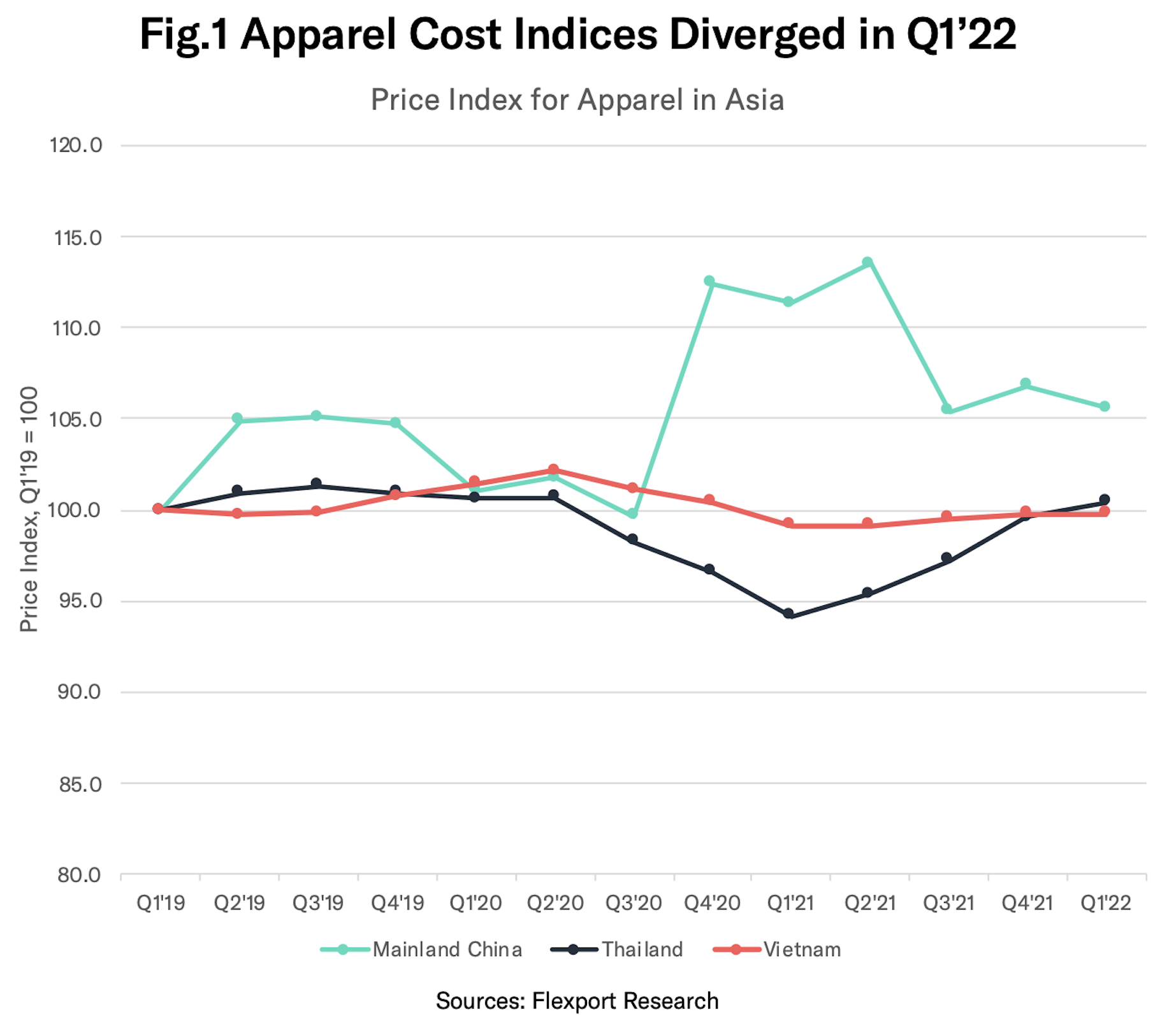 The decrease in the cost of imports from China is remarkable given rising global commodity prices. Disruptions from factory closures in Shenzhen and Shanghai, as discussed in prior Flexport research, will only make themselves felt in the Q2’22 data.

Over the longer-term there’s been a similar pattern of Chinese factories losing competitiveness. The cost index for Chinese apparel in Q1’22 was 4.5% higher than that in Q1’20 while Thailand’s fell by 0.2% and Vietnam’s by 1.6%.

Furniture - Little Sign of Inflation Aside from Mainland China

In common with the apparel sector there’s been a divergence in the cost indices for furniture in Q1’22 compared to Q4’22, including a 1.5% rise in mainland Chinese costs while costs for imports from Indonesia, Taiwan and Vietnam have all declined. Note that Figure 2 has a different scale than Figure 1. 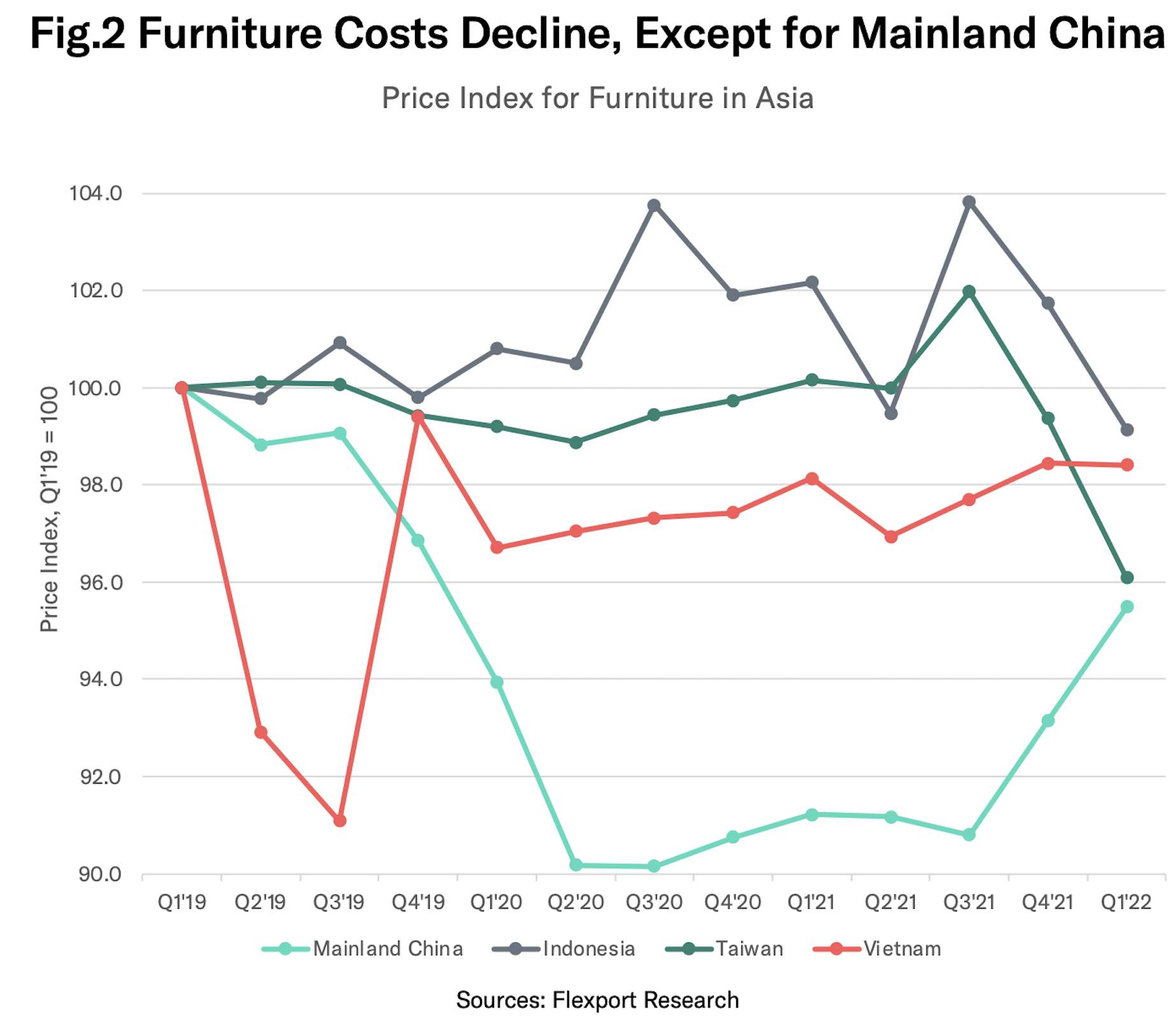 The more recent increase in costs for supplies from China has not offset the marked decline seen in 2019 into early 2020. One reason for the slide may be a desire to offset the cost of the imposition of tariffs under the Section 301 program by the US on imports from China. There’s little sign of progress in discussions between US and Chinese governments in resolving the policy differences that underpin those tariffs.

One area where cost inflation has proven widespread is consumer electronics. The cost of imports from all five geographies tracked have increased, led by a 4.7% rise in costs for imports from Taiwan and 3.0% from mainland China. 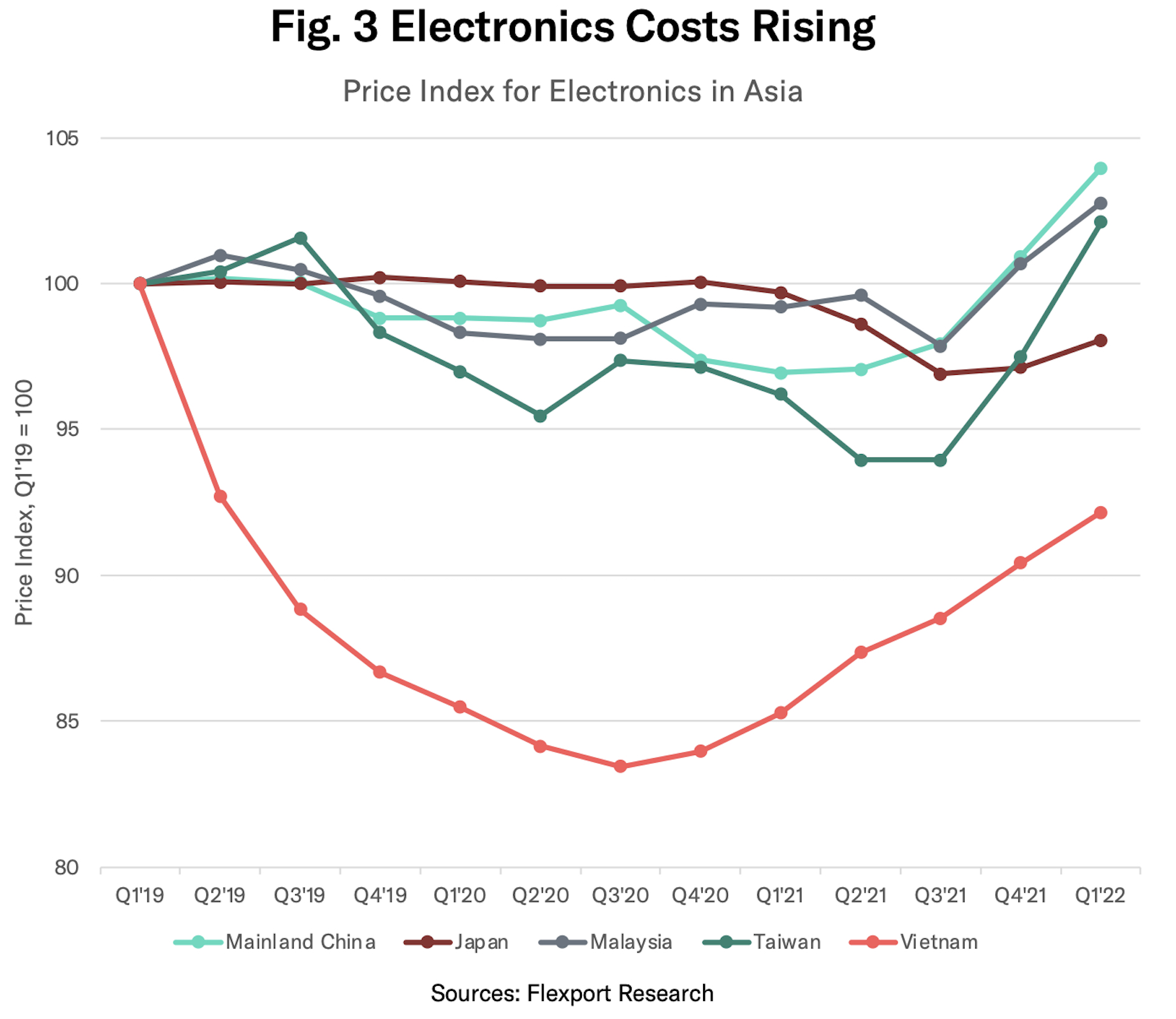 Over the long-term there tends to be cost deflation in the electronics sector for a given level of technological capability. However, supply chains have been up-ended by the ongoing shortage of semiconductors. There’s little sign of the shortage dissipating in the near term, though, COVID-19 related factory closures in China may disrupt the demand side for chips and the supply side for finished products.

The automotive industry has faced wide-ranging and long-lasting supply chain disruptions during the pandemic. Cost indices have increased by 5.1% year over year in Q1’22 for shipments from Taiwan and 4.5% for Vietnam. Chinese supplies only rose by 0.6% after they dipped by 0.6% sequentially in Q1, though inflation over the past two years is similar to the others. 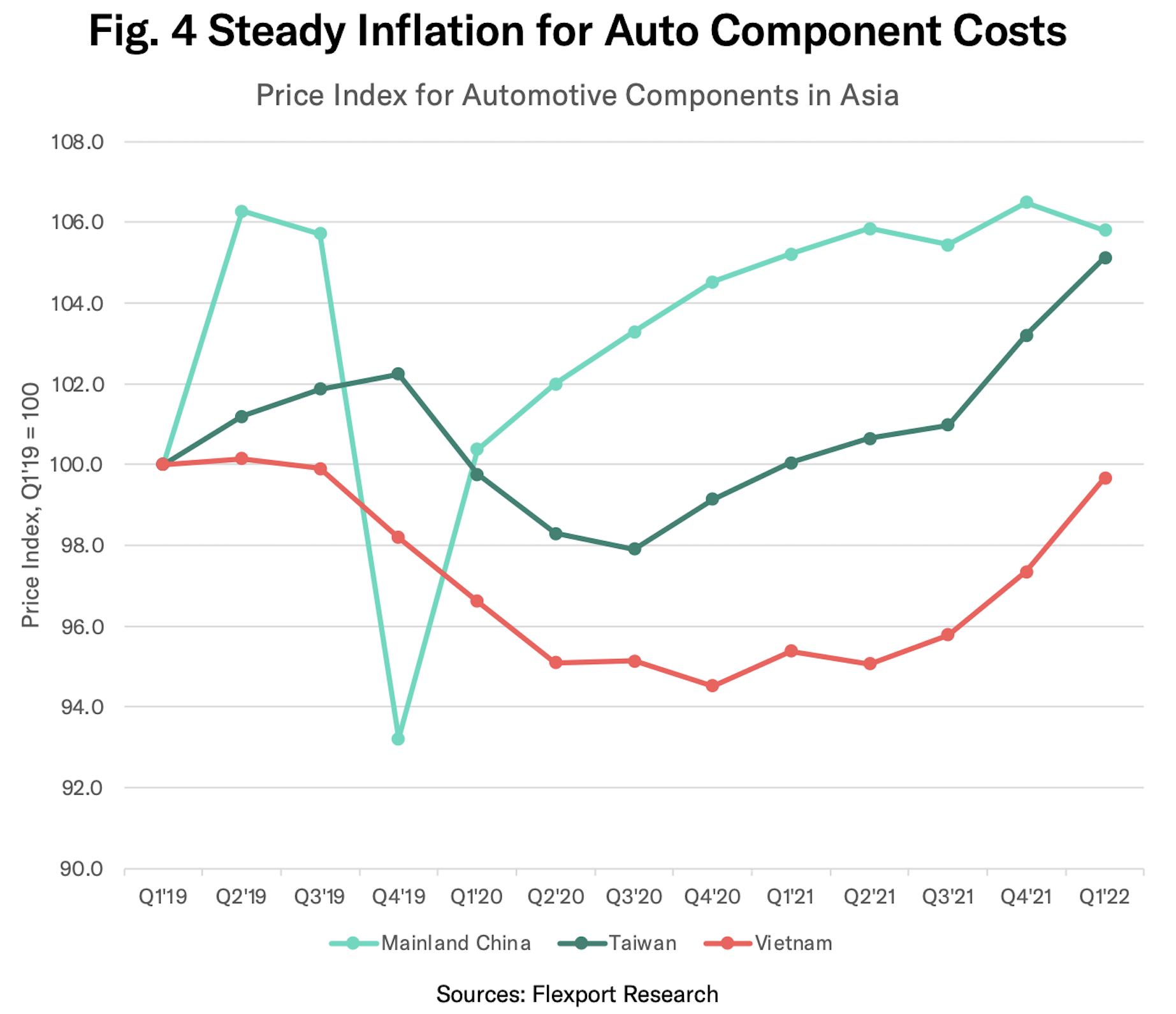 Some care with interpretation is required with auto components given the breadth of products ranging from steel-heavy components such as body panels to electronics focused in-car systems. The escalation in commodity materials, principally metals but also plastics which are tied to the energy complex, may rise further as the impact of the conflict in Ukraine increases.

Comparing identical products sourced from China and Vietnam provides a wider overview of the shift in competitiveness between the two countries over time. The dots in Figure 5 show the individual products with the y-axis scaled as the Chinese sourcing cost divided by the Vietnam cost. The solid lines represent a simple average of the dot readings. 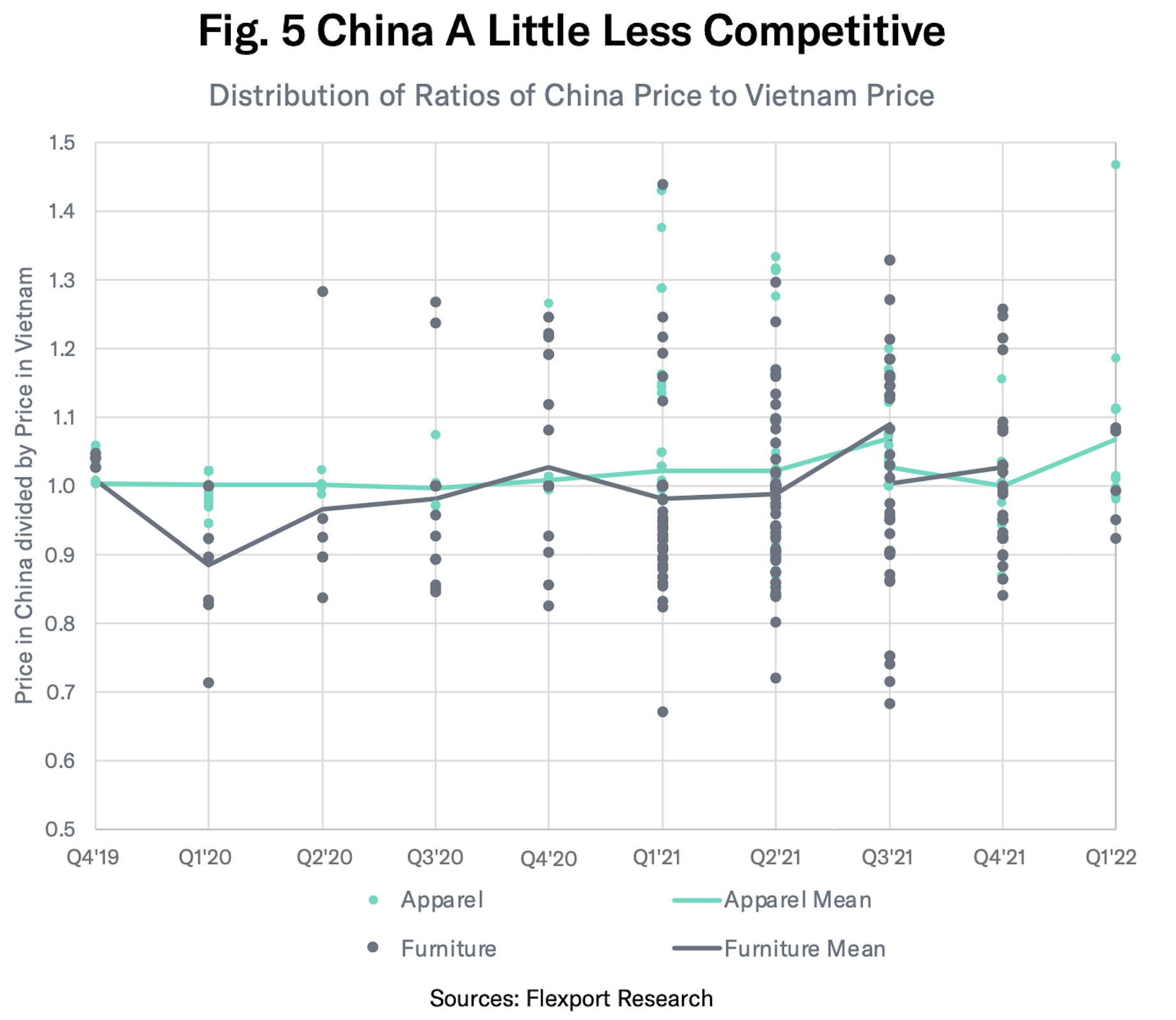 That may indicate that fewer firms are sourcing from both China and Vietnam. Reasons could include: a use of more suppliers to meet higher demand in Q1’21 than Q1’22; the completion of reshoring plans that were underway in Q1’21 and are completed in Q1’22; early signs of the impact of closures of factories in Shenzhen and Shanghai in Q1’22. Similar closures may have been a factor in sourcing in Q3’21 due to closures in Vietnam.

In conclusion: The widespread consumer price inflation that has beset the global economy does not appear across the cost bases of the Southeast Asian manufacturing base. Electronics and automotive components have seen rising prices while furniture and apparel have not. There is preliminary evidence this quarter less multisourcing in apparel and furniture from both Vietnam and China.

The Flexport SEASCI is published quarterly, with the next update - including data for Q2’22 - scheduled for July 2022.

5 Steps to Carbon-Neutral Shipping - What You Need To Know