A kinetic conflict in Ukraine could generate a wide range of challenges for global supply chains. This report considers the implications for natural gas prices, sourcing and downstream supply chain exposures, particularly in the EU. Direct supply chain exposures to gas include electricity, industrial heating, petrochemicals, CO2 and fertilizers. Further along supply chains there are implications for many manufacturing sectors ranging from food to cars. One remedy to shortages in Europe is alternative sourcing via liquefied natural gas, particularly with regards to the direction of U.S. LNG exports, though that may prove insufficient.

Recent developments in eastern Europe raises questions about the challenges that are faced by global supply chains. In previous research we considered exposure of supply chains to conflict in Ukraine with regards to key products and potential disruptions. This report takes a deeper-dive into the importance of natural gas for global supply chains.

What’s so special about natural gas?

Natural gas has received significant attention, as Russia is a major supplier and Ukraine a major transit route to Europe. That’s come at the same time as natural gas reserves in Europe have reportedly fallen to around 35% of capacity currently, from 80% at the same time of 2020. The latter has led to accusations, denied by Russia, that it has cut supplies to cover long-term contracts only and ignored price signals that should have elicited more exports.

In the short term, the German government has specifically raised concerns that Russia may cut gas supplies to Europe in the event of a conflict, or in retaliation for sanctions linked to such an event. Germany has also called for diversification in gas supplies and has already suspended approval of Gazprom’s Nordstream 2 pipeline, which had the potential for Russia to ship gas to Europe without going via Ukraine.

There may also be complications in completing payment for existing contracts if Russian gas exporters become subject to financial sector sanctions. 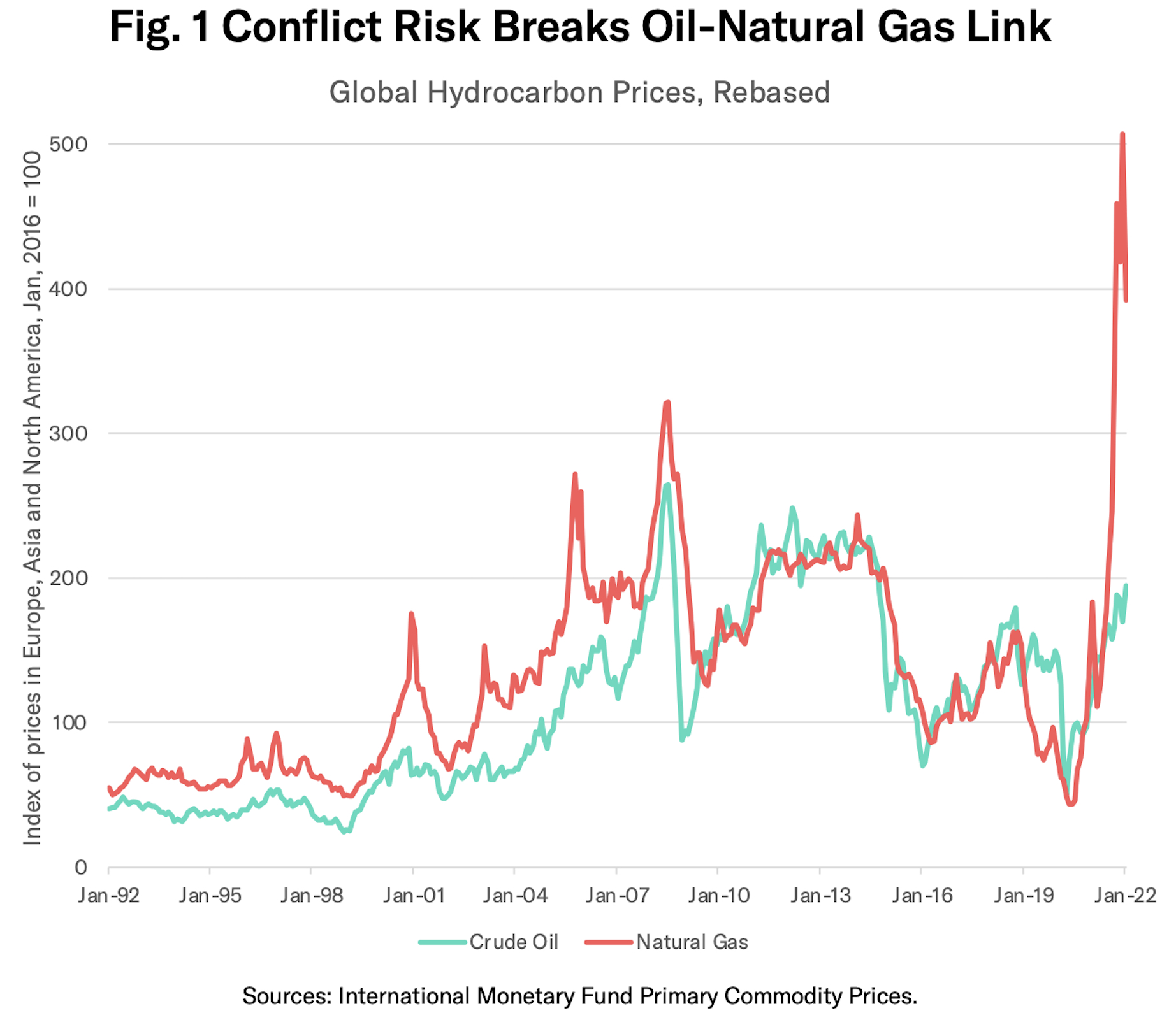 Russia accounted for 10.6% of global natural gas exports in 2020 (UN Comtrade). For the EU it accounted for 23.0% of supplies directly, according to Eurostat and shown in Figure 3, and likely was the source for a further 23.1% which came via Ukraine and Belarus in 2020.

The EU required imports to cover 83.5% of its usage needs in 2020, down slightly from 89.5% in 2019. That comes against the backdrop of rising import requirements in the future in Europe as local gas supplies from the North Sea continue to run down. 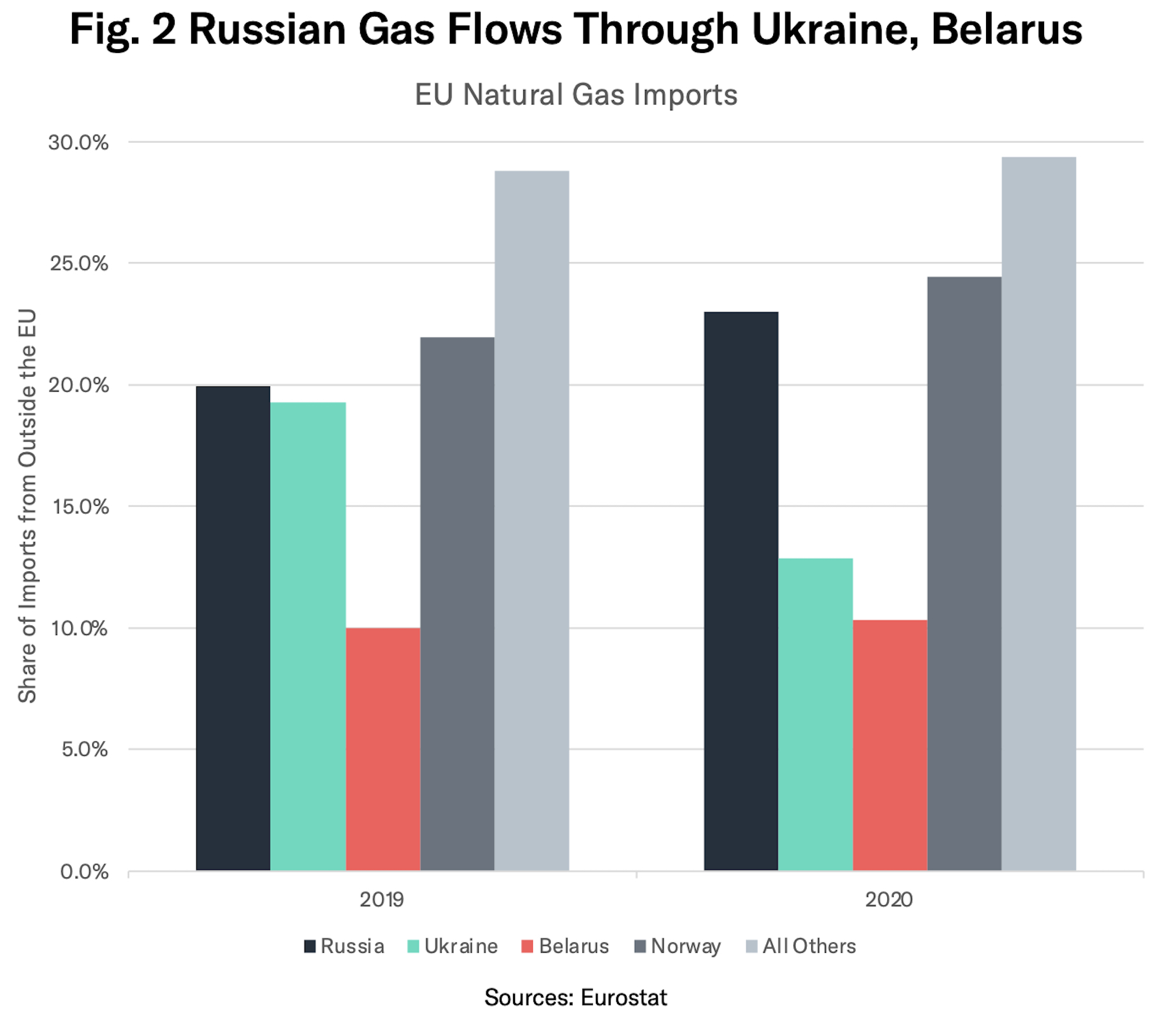 As a globally traded commodity, via liquefied natural gas as discussed below, the potential for a shortfall in one region has led to price rises globally. Data from the IMF, in Figure 2, shows natural gas prices in the three months to Jan. 31 were 3.2x higher than the same period 12 months earlier and 5.1x those in the same period of 2020. For context they hit their highest level in at least 30 years in December.

It’s worth noting the historic connection between oil and natural gas prices. That was the result of two factors. First is the choice made by hydrocarbon drillers, particularly in the U.S., between drilling for oil or for gas. Secondly, long-term natural gas supply contracts historically used oil prices as an indexing factor. The prospects for conflict in eastern Europe alongside the rising importance of spot gas markets appears to have broken the relationship in the past two years.

Natural Gas - Not Just for Cooking and Heating

A further 33% was used for industrial heating and electricity requirements. Additionally, 6% of gas used in the EU in 2020 was for non-energy, manufacturing purposes. Natural gas’s feedstock uses include fertilizers, CO2, hydrogen and a wide range of other chemicals. 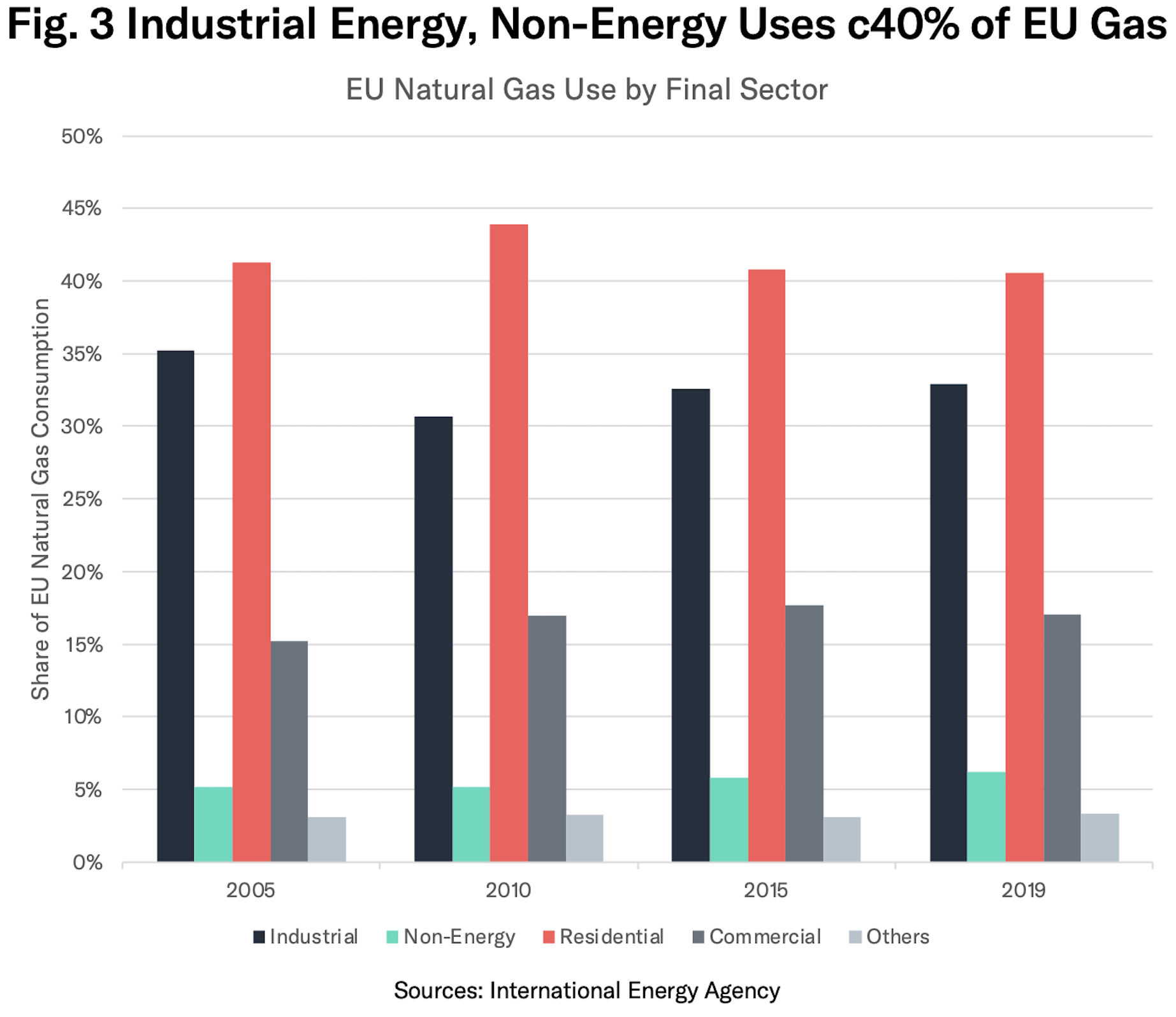 Looking downstream from those products, and adding the elevated costs of electricity produced by natural gas, the impact could of course spread widely across the goods-side of the economy.

For example, in the food industry, both the growing (fertilizer) and packaging (CO2, aluminum, plastics) elements could be affected. Metal-intensive manufacturing processes, particularly those producing aluminum, as well as petrochemicals will also likely face higher costs.

Alternative Sourcing Opportunities in the Event of a Crisis

So what can be done to address a shortfall of gas and / or higher prices in Europe?

There’s been a push, particularly by the United States government to encourage the redirection of global LNG flows to the EU. That’s included discussions between the U.S. and Qatar as well as Japanese plans to redirect LNG shipments to Europe. 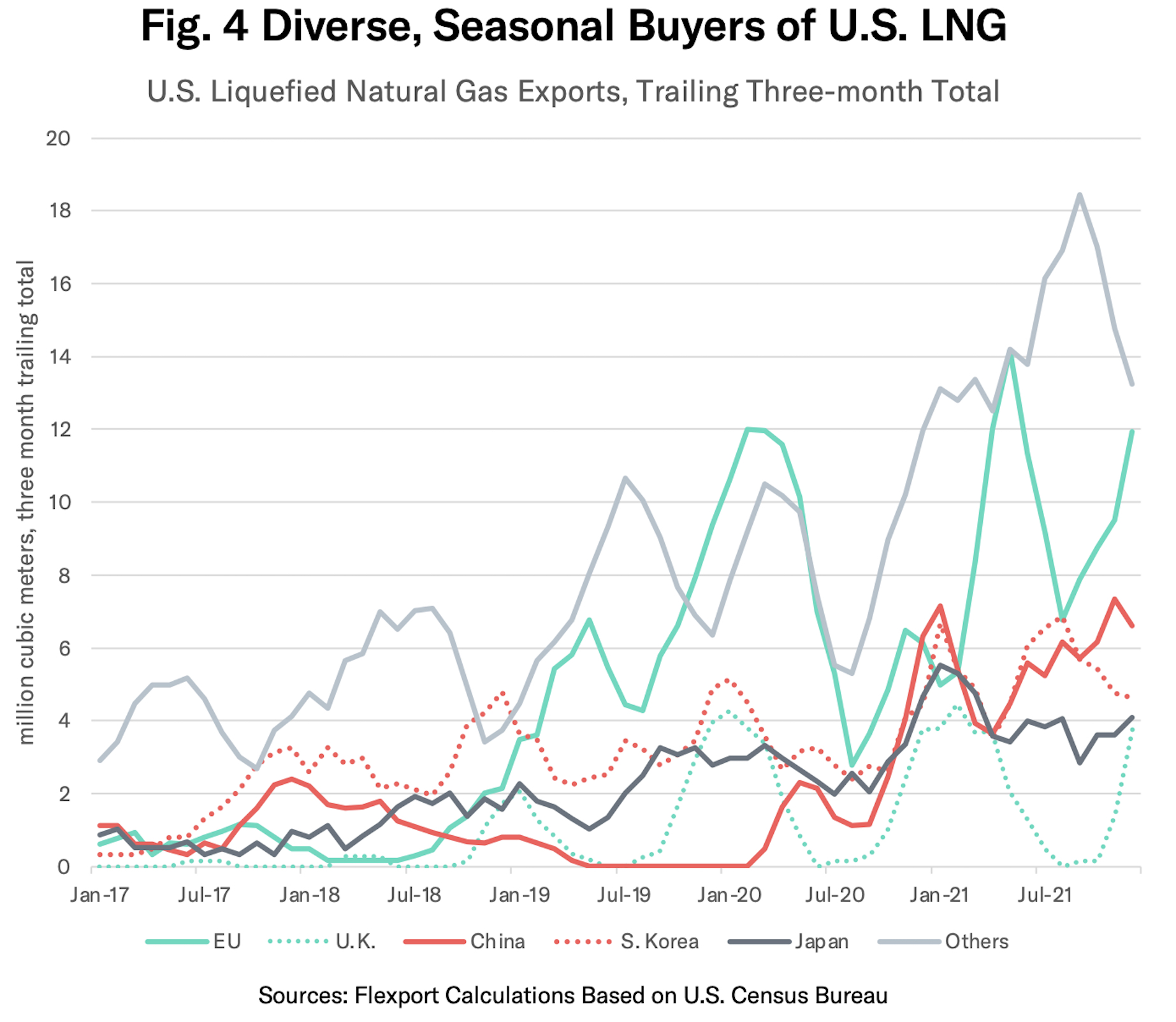 Global trade in LNG has expanded rapidly in the past decade, though significant investments in liquefaction plants, bespoke tankers and regasification facilities have been required. The need for specific infrastructure can reduce its short-term availability as an alternative supply source.

Finally, it is questionable whether LNG imports can completely offset a shortfall in supplies. There was around 210 billion cubic meters (210 bcm) of EU LNG import capacity on a nameplate basis. That compares to imports from Russia equivalent to 151 bcm in 2021 and existing LNG imports of 96 bcm - put another way, LNG could offset around three-quarters (150 bcm divided by 210 bcm less 96 bcm) of imports from Russia, in theory.

However, around half of the EU’s LNG import capacity is focused on southern Europe. The pipeline configuration between EU northern and southern states might not allow enough gas to flow north to offset Russian pipeline gas, raising the specter of shortages and continued elevated prices.

One bright spot for hard-pressed buyers of natural gas is that the winter heating season is drawing to a close, cutting demand from March onwards.