Logistics networks have been beset by pressures resulting from elevated demand and effectively fixed supply. Then there is the question of where one keeps all the stuff. What is happening with warehouse capacity? Is the sector at risk from reduced demand? Warehouse pricing data from WarehouseQuote shows rates remain high, while economic data shows vacancies may be rising and continued demand growth is in doubt.

Elevated demand for consumer and industrial goods, combined with limited capacity for air and ocean freight, have clogged U.S. supply chains during the pandemic. Flexport’s Ocean and Air Timeliness Indicators, plus analyses of trucking and consumer spending all suggest that pressure may be lessening.

The missing link between shipping and the consumer is the warehousing sector. This report looks at the availability and demand for warehousing services to set the context for new warehouse rate data from WarehouseQuote. The monthly data-series, which will be added to Flexport’s Logistics Pressure Matrix, covers storage and pallet handling charges across five U.S. regions. 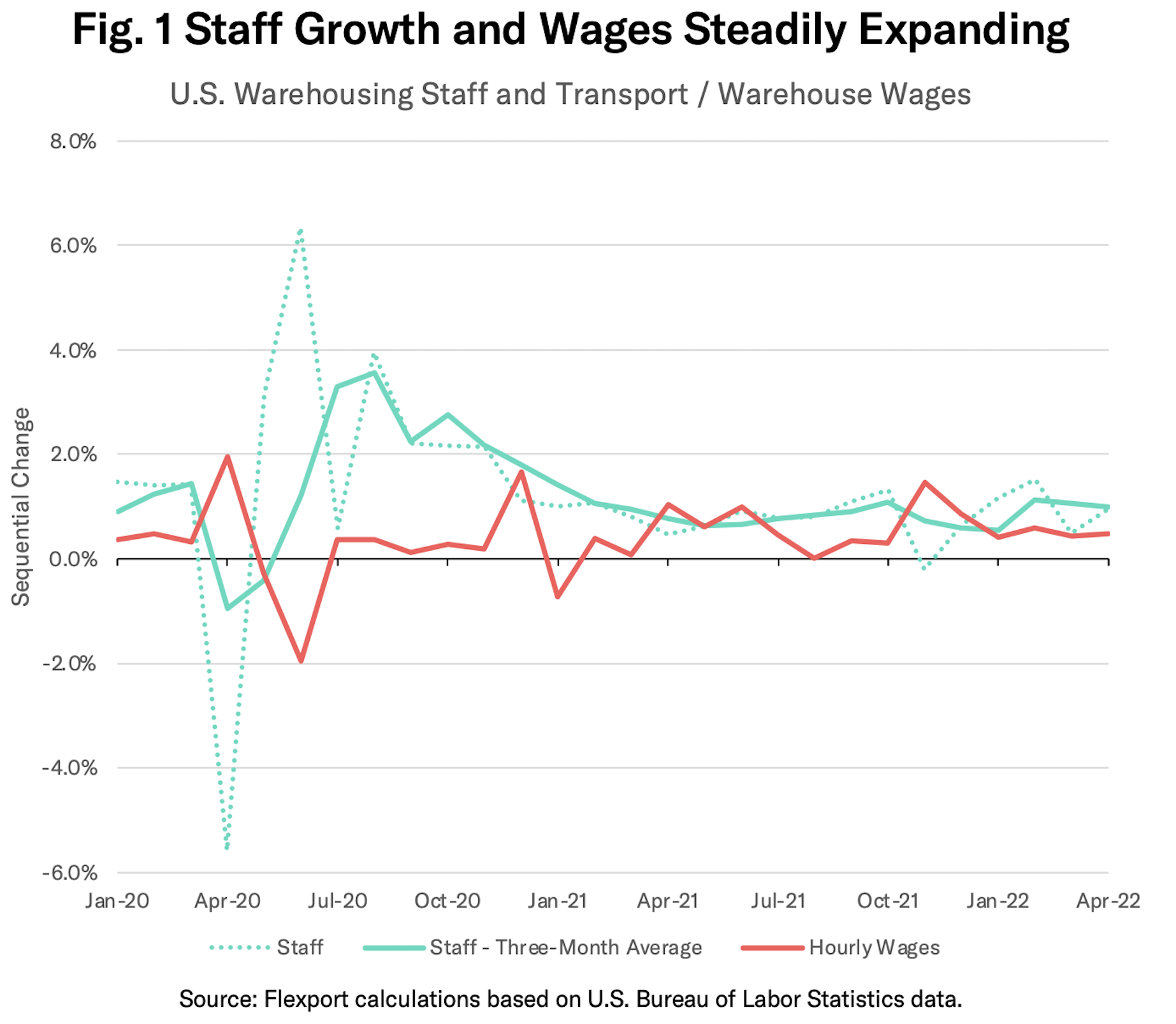 Bureau of Labor Statistics data in Figure 1 shows that employment in the warehousing sector in April 2022 was 49.3% higher than April 2019 with growth every month since the pandemic began except for November 2021. Courier employment rose by 40.5% and trucking increased by just 2.1%.

Wages for transport and warehouse workers have performed similarly to other private sector employees with a 13.1% rise over the same period versus 14.7% for all workers. More recently warehouse pay rises outpaced average private payrolls by 1.8% over the past six months. That may indicate the market for warehouse workers is tightening. 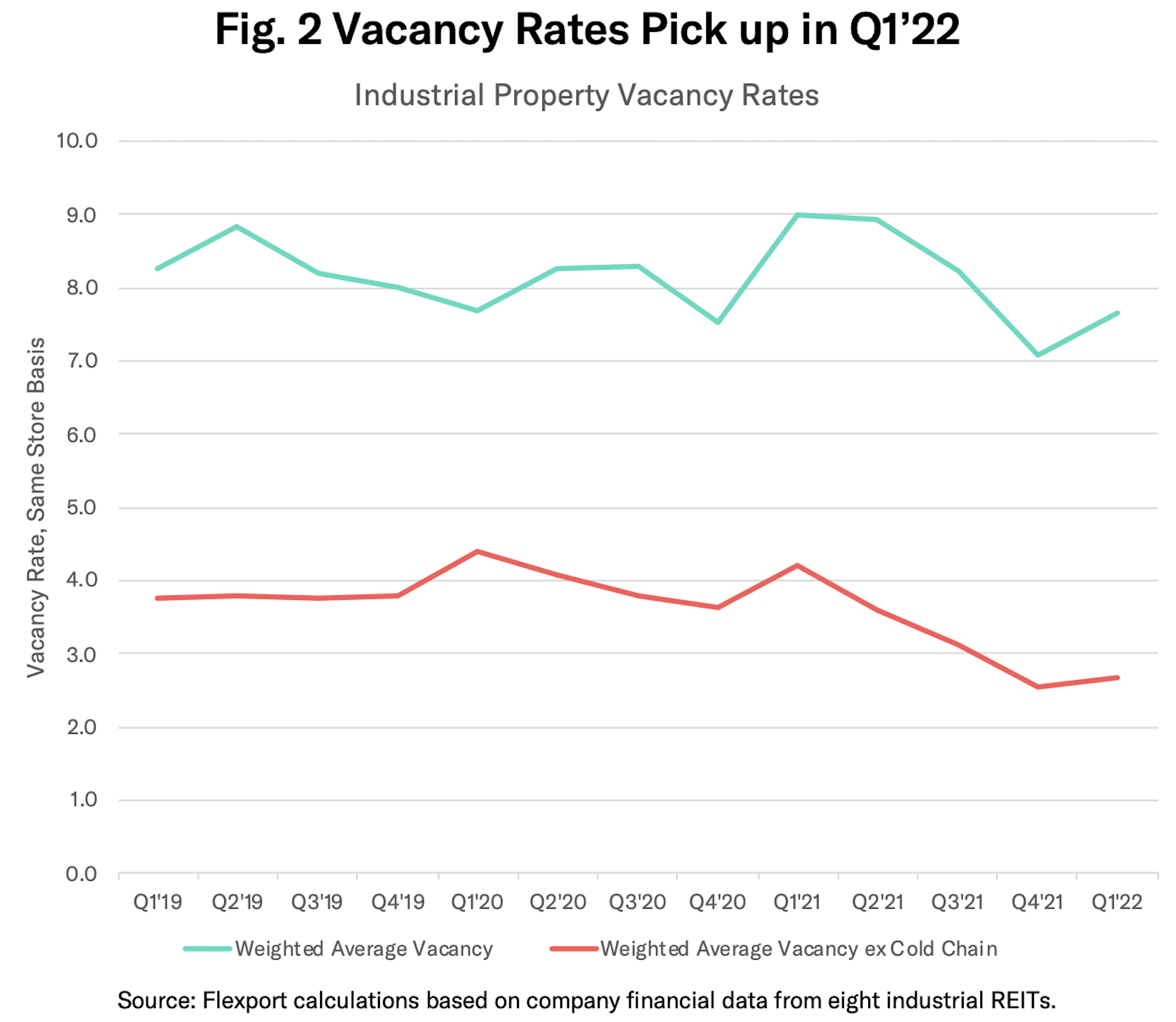 What about the availability of warehouse space? Using the financial data for eight major warehouse and industrial property owners, shown in Figure 2 above, we can see vacancies were just 2.7% of capacity in Q1’22 excluding cold-chain capacity. That was modestly above the 2.5% seen in Q4’21 but is still well below the 4.2% level of Q1’22 and 3.8% of 2019.

That’s not a new phenomenon—the availability of spare warehousing capacity has been in steady decline for several years, according to Savills. The longer-term downtrend may also reflect improved efficiency among warehouse owners in only building what is needed and cutting back on speculative spending.

Slightly higher vacancy rates and slightly lower construction may be signs of a cooling in asset owners’ and users' expectations for growth, but what does the demand data show? 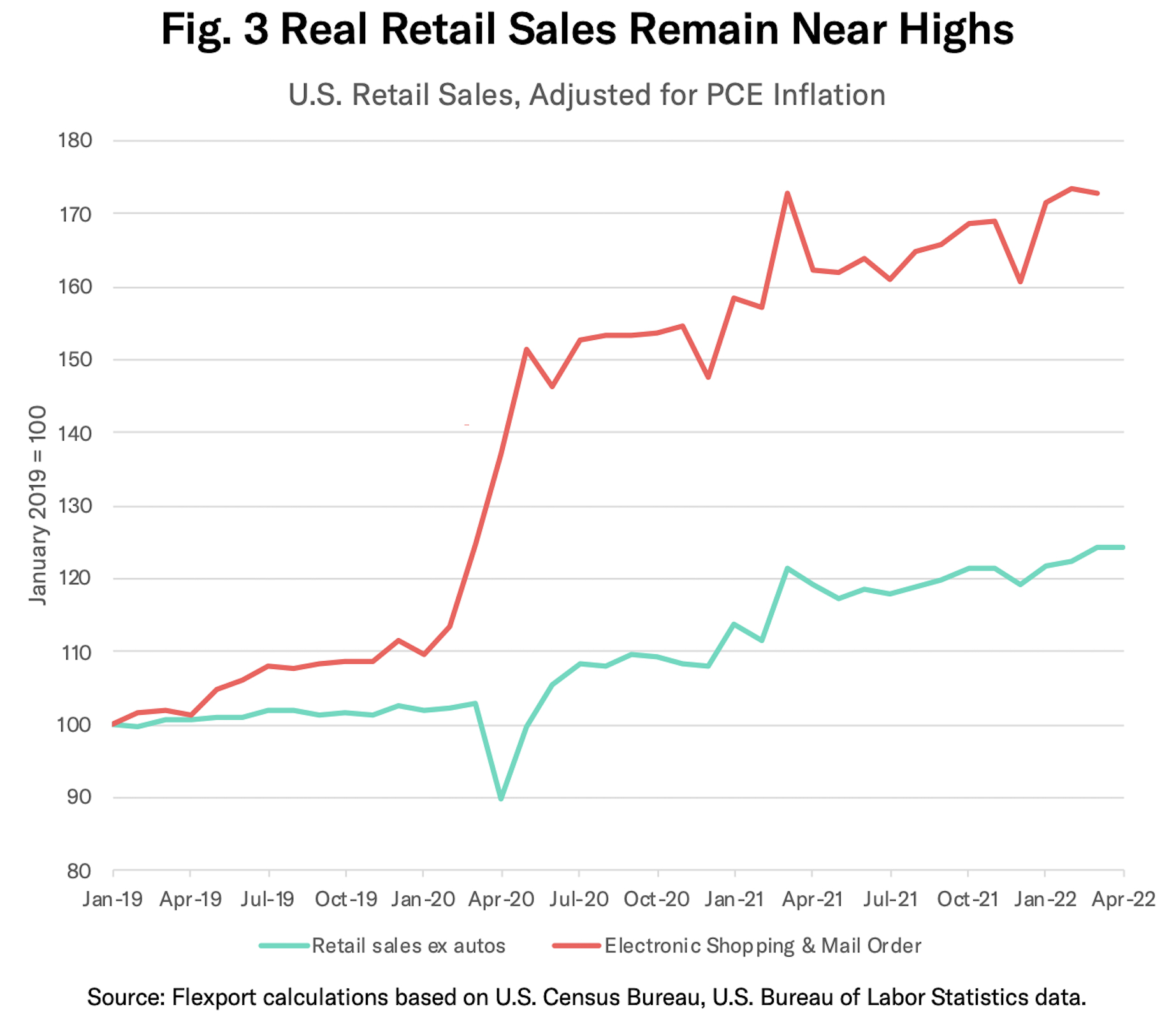 By shifting final distribution from the retail store to the warehouse, ecommerce places a higher burden on warehouses per dollar of sales—imagine the store as a form of warehouse now foregone.

Warehousing had benefited not just from higher retail sales but also the shift to ecommerce. The share of online sales in total retail sales reached a peak of 22.9% in April 2020 and has since fallen to 20.5%.

The latter is nonetheless well above the long-term trend which would have put the ratio at 18.4% if pre-pandemic trends had continued. A reversion to trend—for example as pre-Covid shopping behaviors return—could reduce demand for ecommerce warehousing.

Flexport’s Post-Covid Indicator shows the balance of consumer spending on goods versus services is starting to reverse, especially for nondurable goods, though the ratio is still a long way from pre-pandemic levels. Nonetheless, it would be a mistake to assume that only a modest reversal in sales is possible.

Looking further ahead, warehouse users’ choices regarding their inventory strategies will also be a factor to consider. 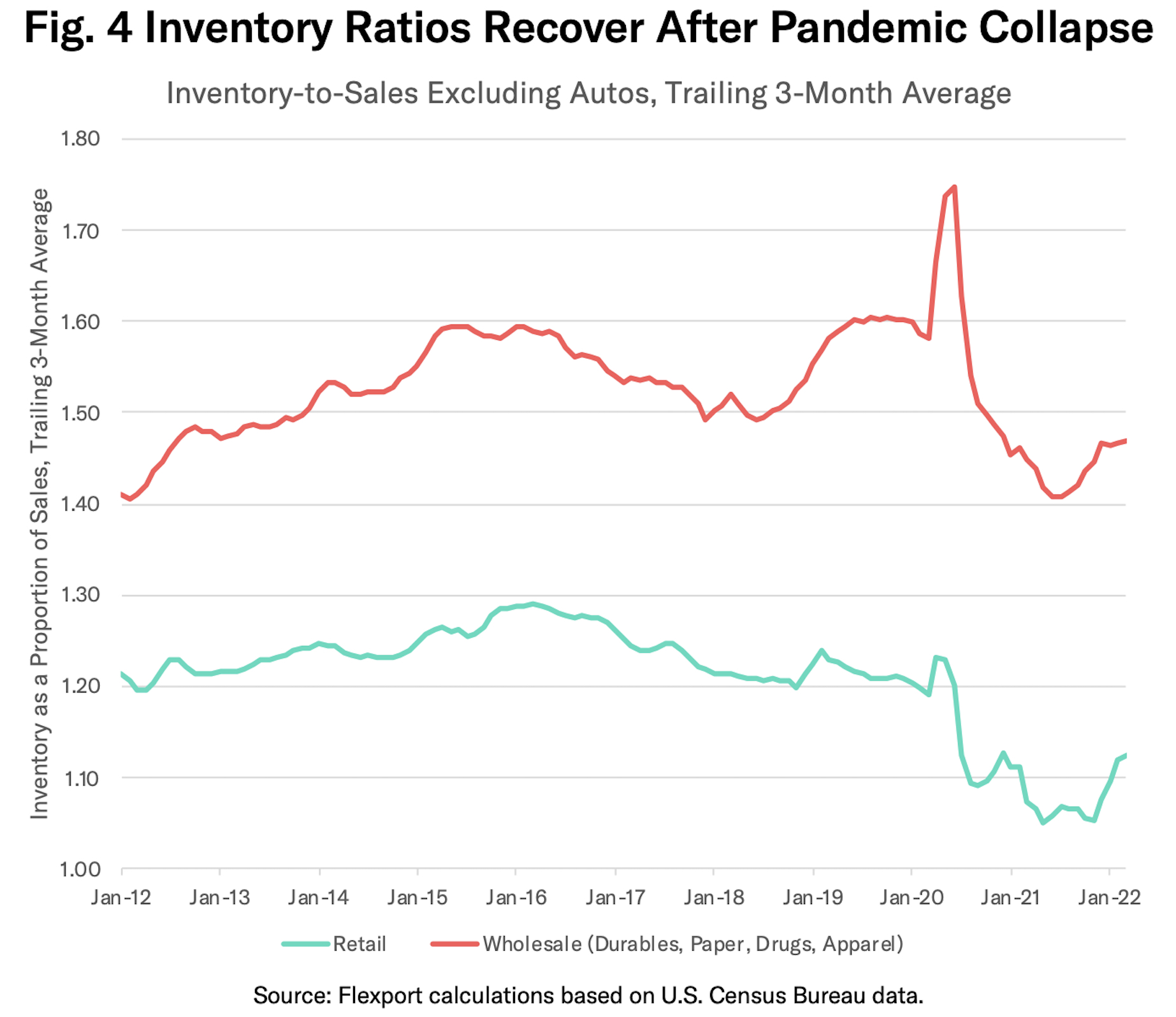 Inventory levels for both retailers and wholesalers expressed as a percentage of sales have increased from their pandemic-era lows.

The question—for shippers as well as warehouse owners—is whether there will be a return to pre-pandemic inventory practices.

A return to just-in-time type strategies is also possible, particularly for firms that have found their customers are relatively patient in the face of shortages. In those instances a return to pre-pandemic inventory balances is unlikely. There’s also the potential for shareholder pressure to optimize cash flows at the expense of supply chain resilience, which was how we ended up with just-in-time originally.

By contrast, a move to just-in-case strategies may be justified by the lost sales incurred over the past two years and lead inventory levels to well above their pre-pandemic levels. Commentary from firms in the Q1’22 earnings reporting season suggests strategies will vary between competitors within industries.

So, if supply remains tight but could turn, while demand risks appear to be more on the downside, what are warehouse rates showing?

First, storage represents the price paid to secure ongoing space in an ambient-conditions warehouse. The user pays whether the space is utilized or not. The rate will tend to vary with the availability of capacity and the costs to lease warehouse space in the United States.

The second reflects the frequency of turnover of the space used—more labor is used in emptying and refilling a warehouse every day versus once a month. Pallet-In and Pallet-Out shows the rates paid as goods are brought into and taken out of the warehouse. Rates will vary in absolute terms and over time between Pallet-In and Pallet-Out for seasonal (e.g. front-loading of inventories before peak season) and service (e.g. Pallet-Out requires a bill-of-lading) reasons. Pallet rates also tend to vary with the cost of labor.

The indices are calculated using completed transactions only with regional and national averages generated on a monthly basis. The top and bottom three percent of transactions by rate are removed to allow for outliers. 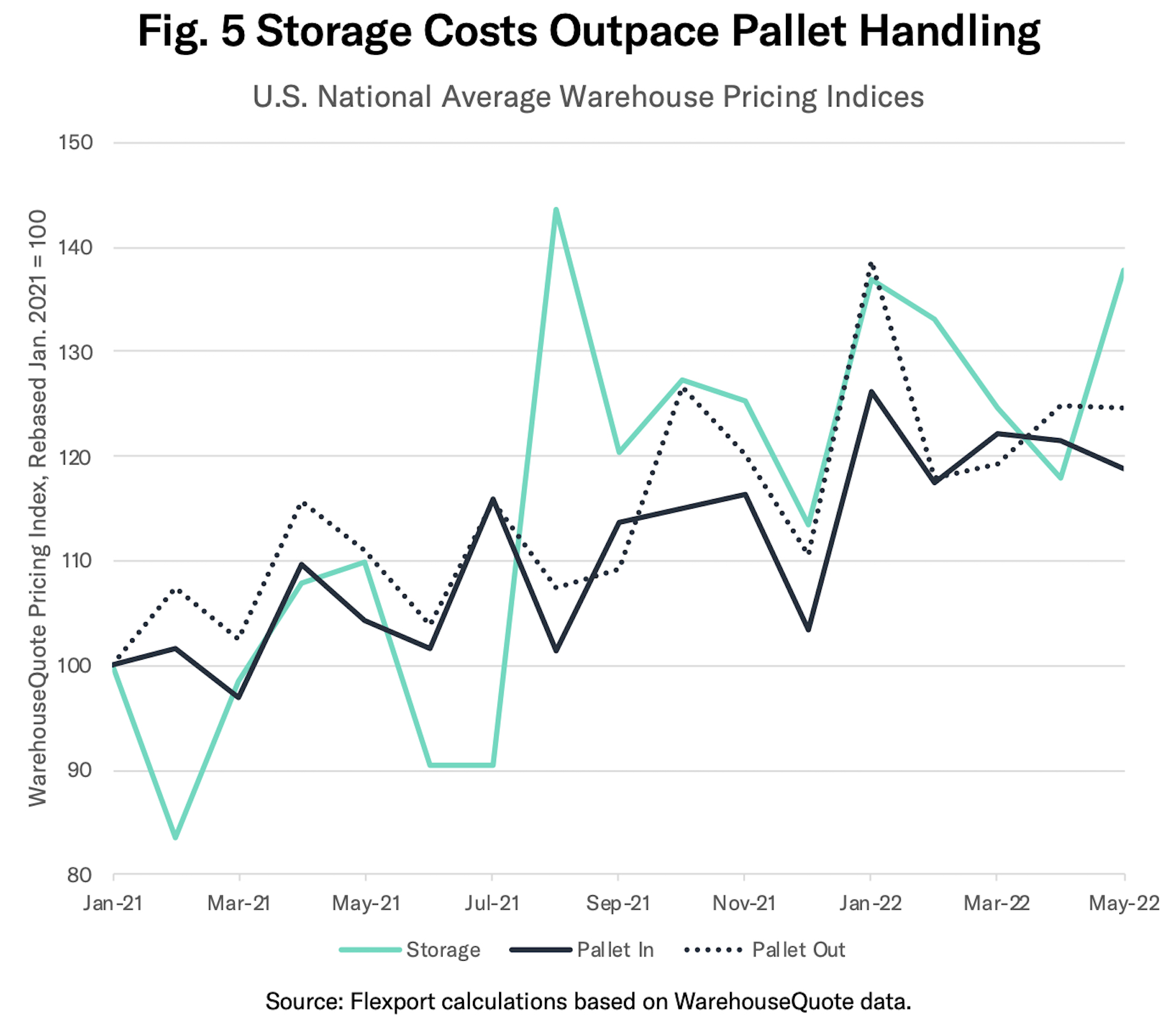 The prevailing tight market (low vacancies) may be driving the considerable month-to-month volatility shown in Figure 6, but the trend for storage has clearly been positive. On a national basis storage rates rose by 17% sequentially in May and by 25% year-over-year. On a smoothed basis rates rose by 20% in the three months to May 31 versus the same period a year earlier.

That left the index close to its August 2021 high. In turn, that raises the potential that buyers of products may have to delay final delivery if storage costs are too high for their shipments to be profitable.

The pallet rates are also elevated but not by as much. That may reflect the reduced wage growth noted above but could rapidly pick up, particularly heading into the peak shopping season later in the year. 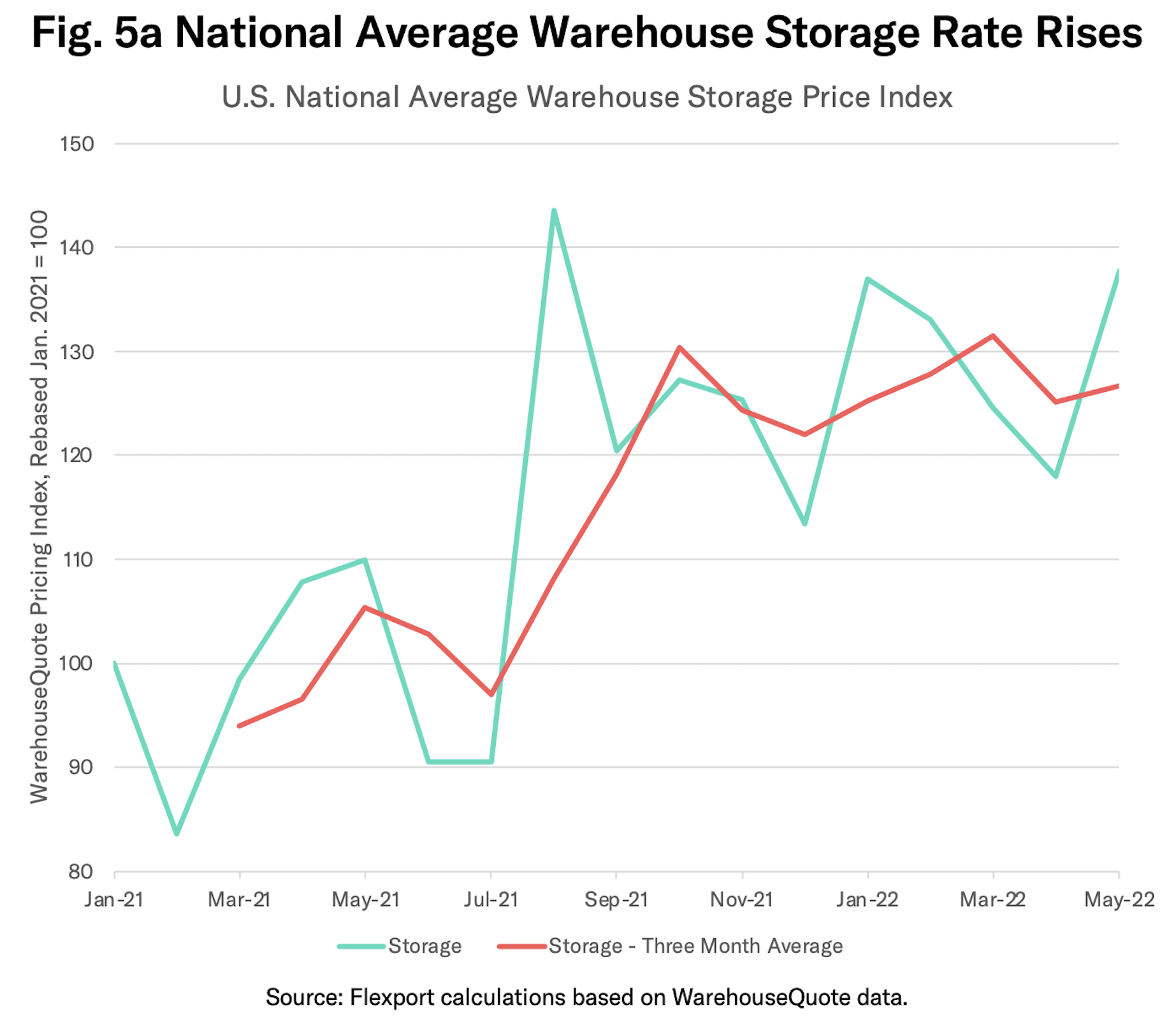 The utility of the WarehouseQuote WPI for National Storage in showing the balance of supply and demand forces weighing on the warehousing section of logistics networks leads us to start including the national storage measure shown in Figure 5a, alongside its three-month trailing average, in our Logistics Pressure Matrix. 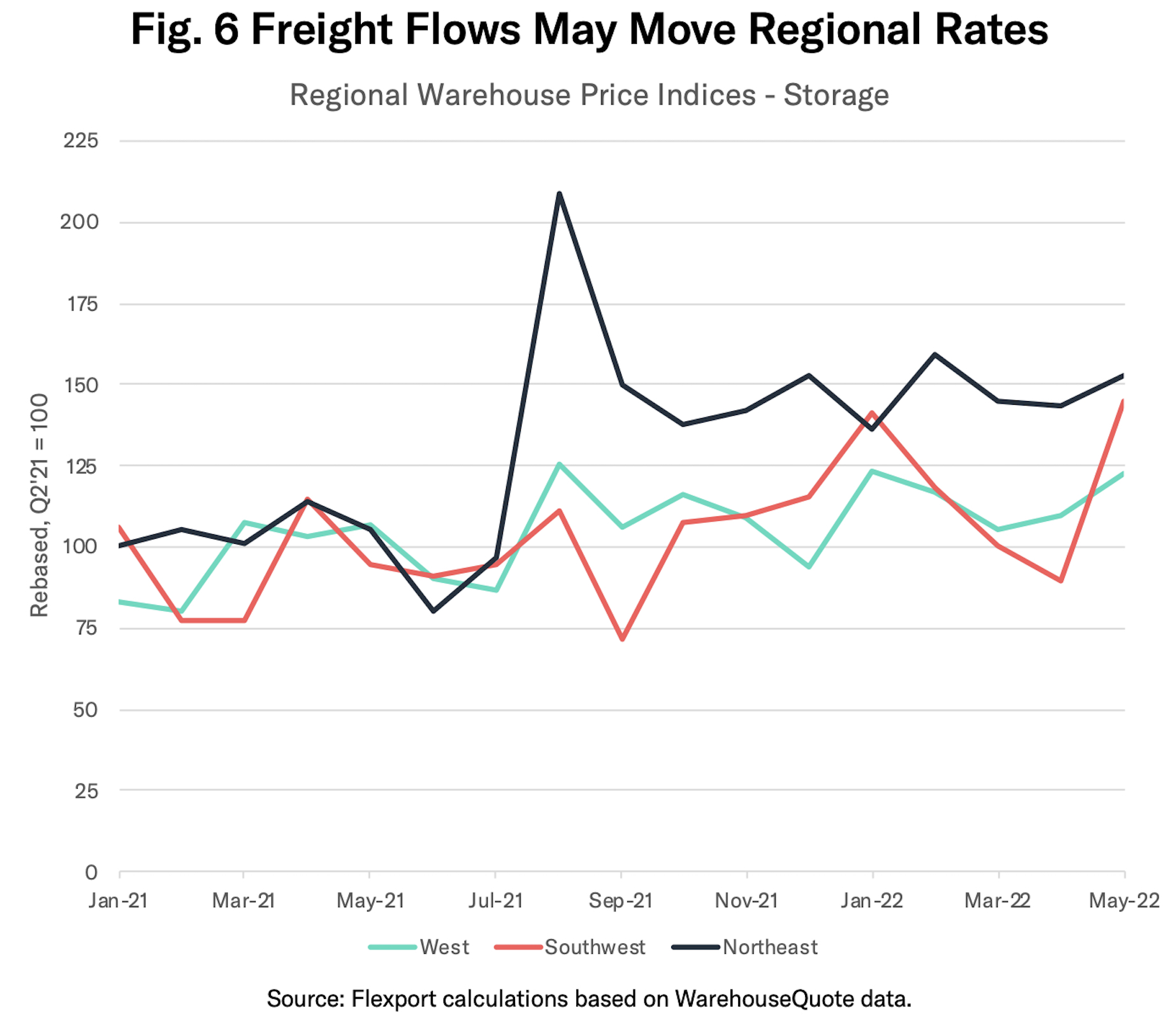 Looking at storage rates on a regional basis, the congestion in California’s ports may have resulted in diversions to other locations. That can be seen in Figure 7 with West region storage rates which have risen by 15% year over year in May while the Southwest and Northeast rose by 53% and 45% respectively.

In conclusion: The warehousing sector remains heavily congested, though there are some signs that demand and occupancy may be waning. Warehouse rates meanwhile remain elevated.