This week we take a look at trade relations between the U.S. and U.K., the latest sanctions applied against Russia and the state of U.K. retail sales.

In Focus - Making the Special Relationship Special Once More 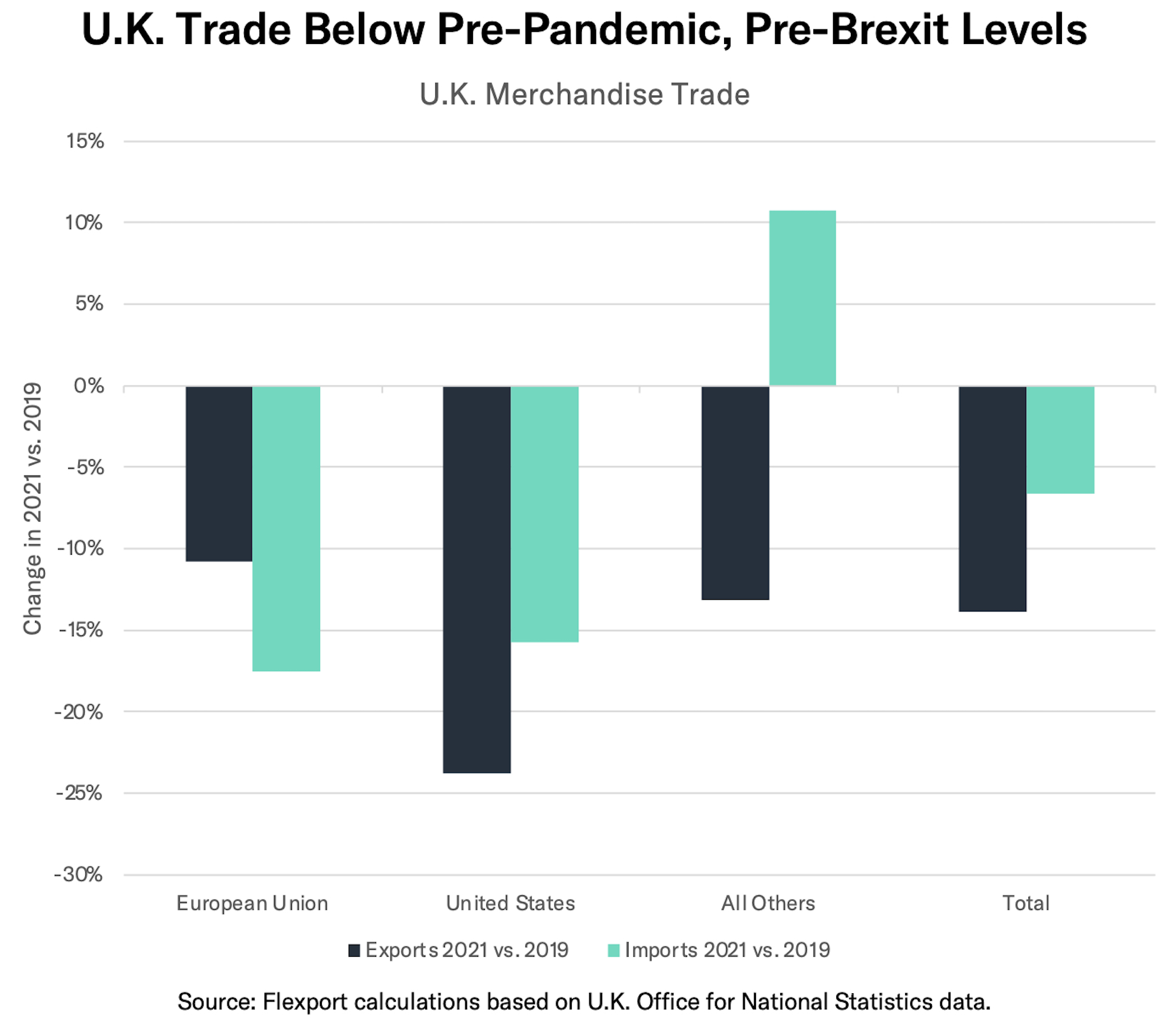 A key aim for the Conservative Party in supporting Brexit - which formally took effect on Jan. 31, 2020, was to gain the ability to sign international trade deals independently of the European Union. So, just over one year on, how’s that going?

A major target for the Johnson administration has been a trade deal with the United States, strengthening what Prime Minister Johnson’s hero, Winston Churchill, referred to as the “special relationship.” Not only has there been no such deal completed, but the volume of U.K. trade with the U.S. has fallen notably.

The chart above shows the change in U.K. merchandise trade in 2021 versus the pre-pandemic, pre-Brexit period in 2019. The United States accounted for 10.8% of the United Kingdom’s international merchandise trade activity in 2021. As shown by the black bars in the chart above, exports to the U.S. slumped by 24% in 2021 versus 2019 while imports (green bars) from the U.S. fell by 16%. The U.K. will therefore be sure to want to increase its trade, and particularly exports to the U.S., given EU-bound exports have fallen by 10.8% over the same period.

After a rapid start under the Trump administration, the rate of negotiations cooled initially under the Biden administration. In the past week new talks, not based on the original Trump-era framework, have kicked off with discussions on how to “collaborate to advance mutual international trade priorities,” focused on labor rights, supply chain resilience and environmental matters.

A full free trade agreement appears to still be off the agenda - if nothing else the Biden administration does not have so-called “fast track” (or Trade Promotion Authority) approval for a deal which would greatly lengthen or even preclude Congressional passage of a deal.

Small deals that move the ball forward are likely to be the order of the day. To that end, the two sides have resolved their differences over steel, with the U.K. removing retaliatory duties against U.S. Section 232 steel and aluminum tariffs. Instead a system of quotas for U.S. imports from the U.K. will apply.

Further talks between the two sides, which could yield new export opportunities for the U.K., will reportedly be held in April. Areas where U.K. exports to the U.S. are below-scale versus its exports to the EU include processed metal products, food (particularly cereals and meat), plastics and vehicles (other than cars).

Our latest research reports have included: a deep dive into moves by G7 members to withhold MFN status from Russia; developments in retail inventory / sales ratios; and our testimony to the U.S. Senate on supply chain resilience.

There was further evidence of labor market tightness in the U.S., as the weekly jobless claims hit their lowest level since 1969 (when the labor force was substantially smaller). The 187K figure was in stark contrast to the peak, just under two years ago, at 6.15M.

The benchmark 10-year U.S. Treasury bond yield closed the week just below 2.5%, a dramatic increase from the 1.72% recent low a few weeks before. The yield is the highest since May of 2019.

U.S. pending home sales were down 5.4% in February from a year earlier. While some analysts blamed this on a shortage of homes available for sale, home sales can be a determinant of orders for durable goods, such as furniture.

The conflict in Ukraine has taken a heavy toll on European economic sentiment. An EU measure of consumer confidence fell to its lowest level since the early months of the pandemic, while a measure of German business sentiment “collapsed,” with a drop in expectations exceeding that of the pandemic onset.

U.K. retail sales excluding fuel and food rose by 1.0% in February versus January while online sales fell by 3.9% on a seasonally adjusted basis. When adjusting for inflation, non-food/fuel sales including stores and online rose by 14.5% year over year in February and by 7.1% versus 2019.

The U.S. has reinstated exclusions from Section 301 duties on imports from China, covering 352 products, to Dec. 31 2022 - compared to 549 that were under review. The first round of duties first applied in July 2018 (“list 1” products, focused on manufacturing components) are due to roll off in July.

The U.K. isn’t just talking about a trade deal with the U.S. - negotiations with Canada have started in order to review the continuity deal that the U.K. inherited when it left the European Union.

The G7 nations and their allies have launched a new round of sanctions against Russia. Those include adding a further 400 entities to its blocking sanctions list in the U.S., a new focus on sanctions evasion and moves to block the Russian Central Bank’s access to gold reserves.

The availability of oil and natural gas supplies, a key area of exports for Russia, is evolving rapidly: 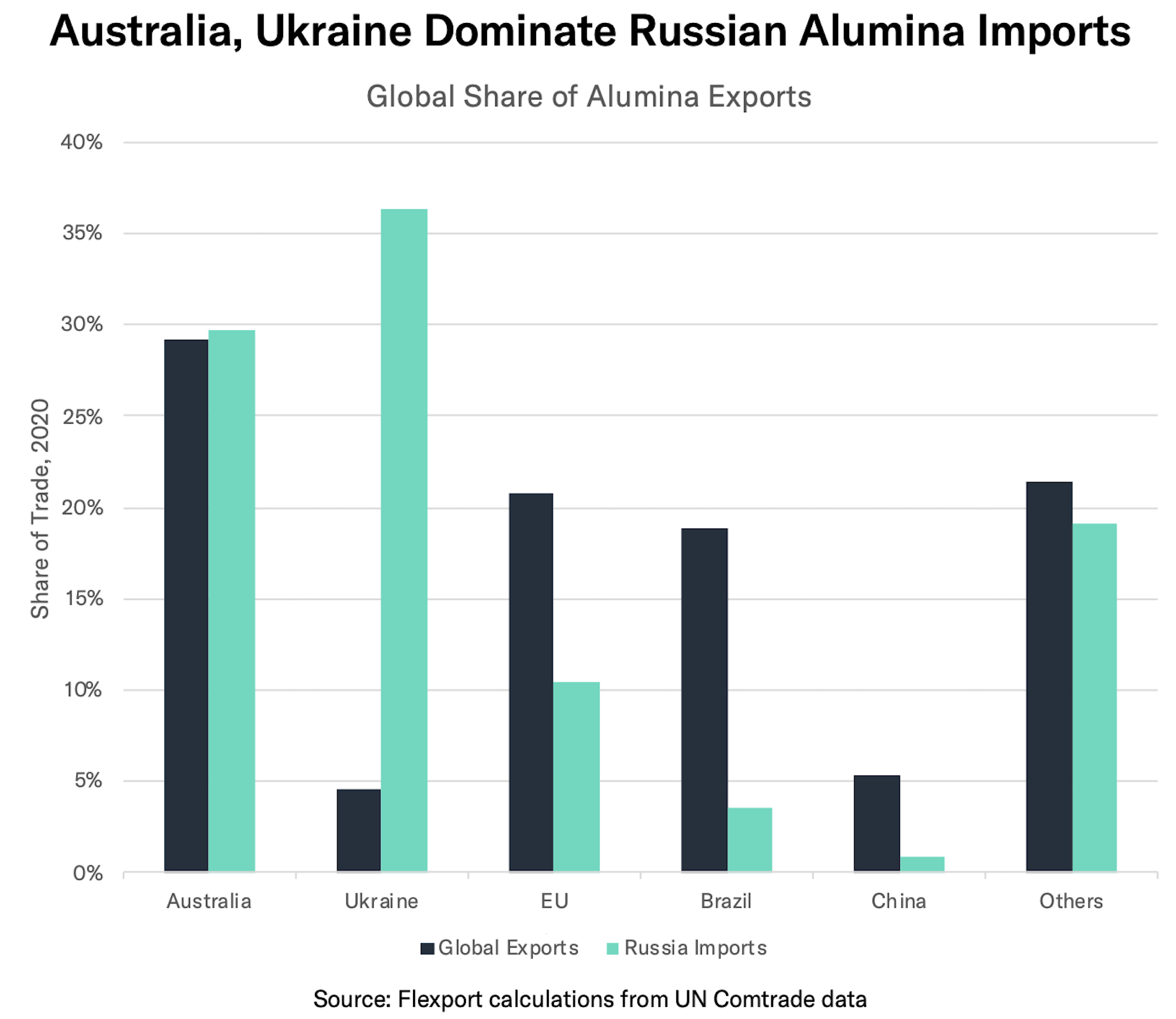 The Australian government has banned the export of alumina and bauxite to Russia this week as part of an expanding range of sanctions applied by G7 and allied nations. Australia accounted for 30% of Russian imports of alumina (HS 2818, source UN Comtrade) in 2020 while Russia accounted for 12% of Australian exports.