Winter is Coming - Dealing with a Weak German Economy

The German economy faces a very different set of challenges from the EU at large. This report reviews the key drivers of German industrial, consumer, and trade activity. Germany’s heavier-than-EU-average exposure to industrial activity and declining manufacturing sentiment, combined with uncertainties about natural gas supplies bodes ill for the economy. Yet, a weak euro versus the dollar may provide export growth opportunities with shipments led by healthcare, autos, and capital goods. 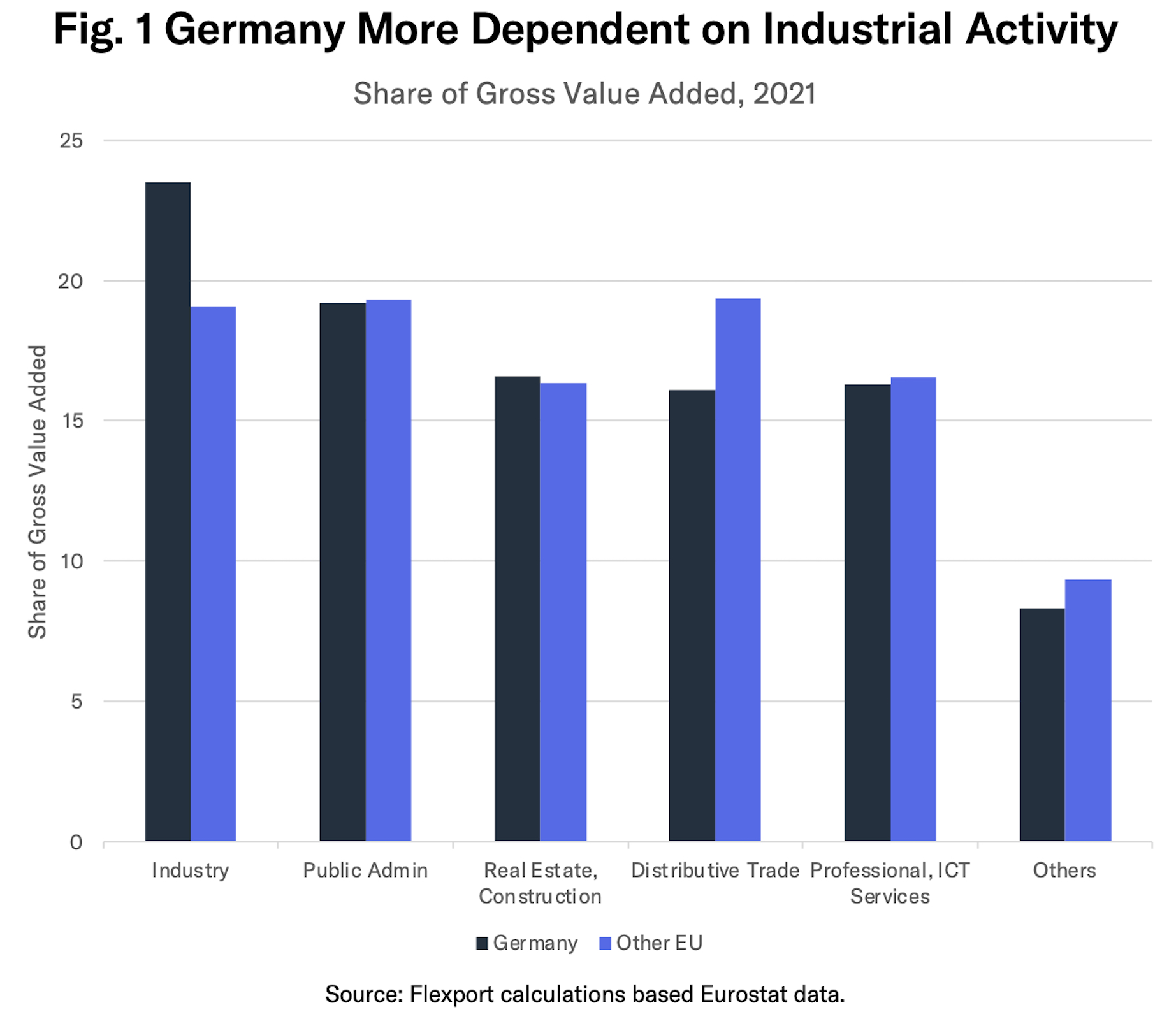 Inflation About More Than Conflict

Like the rest of Europe, Germany faces elevated consumer price inflation which reached 8.2% in June compared to the annual Euro Area average of 8.6%. While the recent step-up from 5.1% in January was due in part to energy disruptions caused by the conflict in Ukraine, prices rose steadily throughout 2021 starting at 1.6% inflation in January 2021. 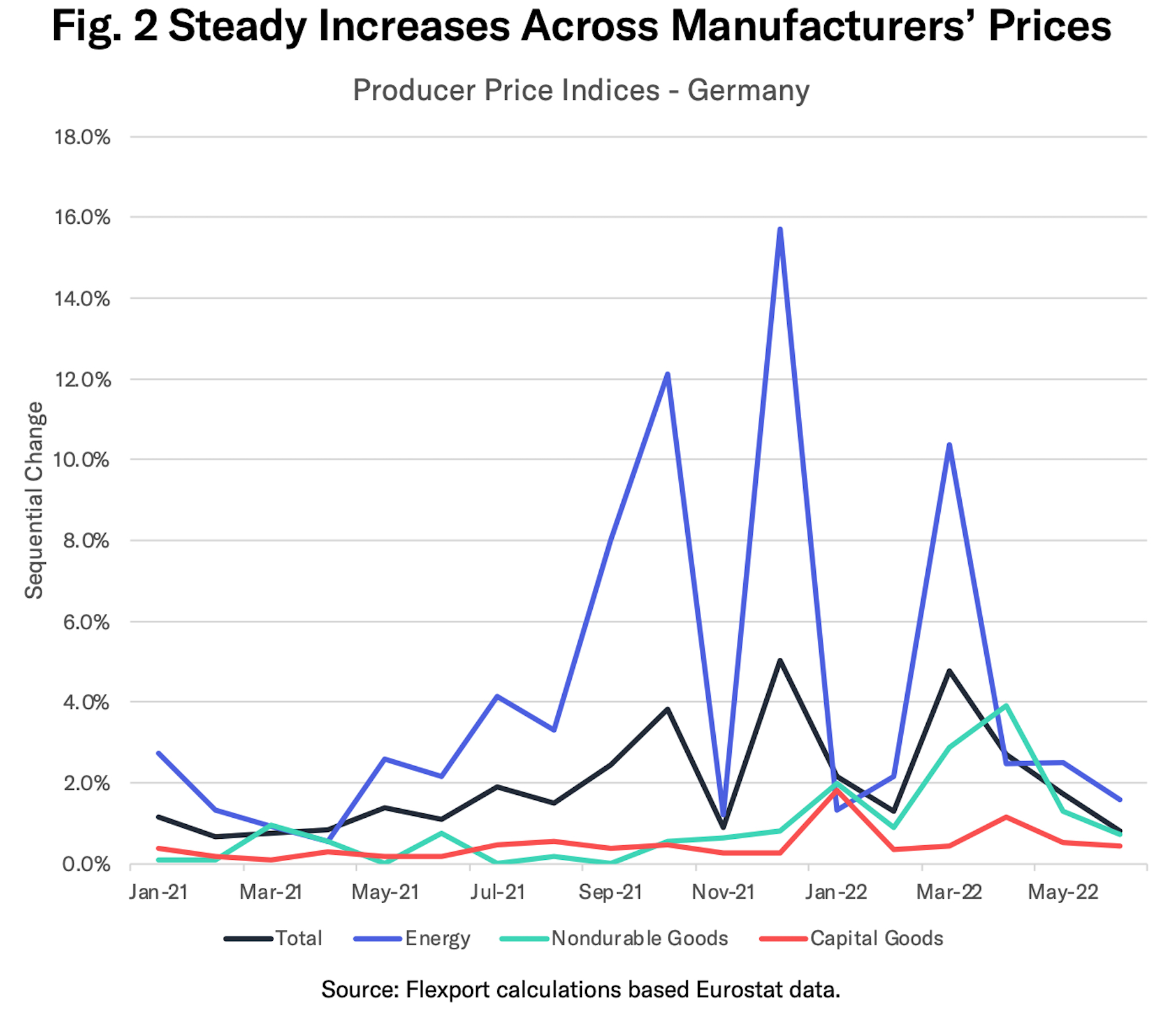 As shown in Figure 2, producer prices for durable goods have risen by 4.8% year-to-date, while nondurables have increased by 9.7%. Capital goods PPI rose by a more sedate 2.9%. Energy prices have proven more volatile and may depend on how natural gas supplies and politics play out during the winter (see below).

The European Central Bank has started to raise interest rates to tackle inflation across the Euro Area. The ECB faces a considerable challenge in ensuring a slowdown in inflation in Germany while avoiding a new financial crisis in the more heavily indebted countries in the bloc. The Transmission Protection Instrument is intended to help in that regard, as discussed in recent Flexport research, though details are still scarce.

Lots of Jobs, Much Less Confidence

Another challenge for the ECB is that unemployment is at historic lows across the EU at 6.2% in April. That includes a rate of just 3.0% in Germany, in line with the 2.9% reached in mid-2019 that's well below the previous 20-year average of 7.0%.

Staff shortages with elevated inflation, changing monetary policy, and uncertain geopolitics (the Ukraine conflict) may be contributing to a decline in industrial confidence. 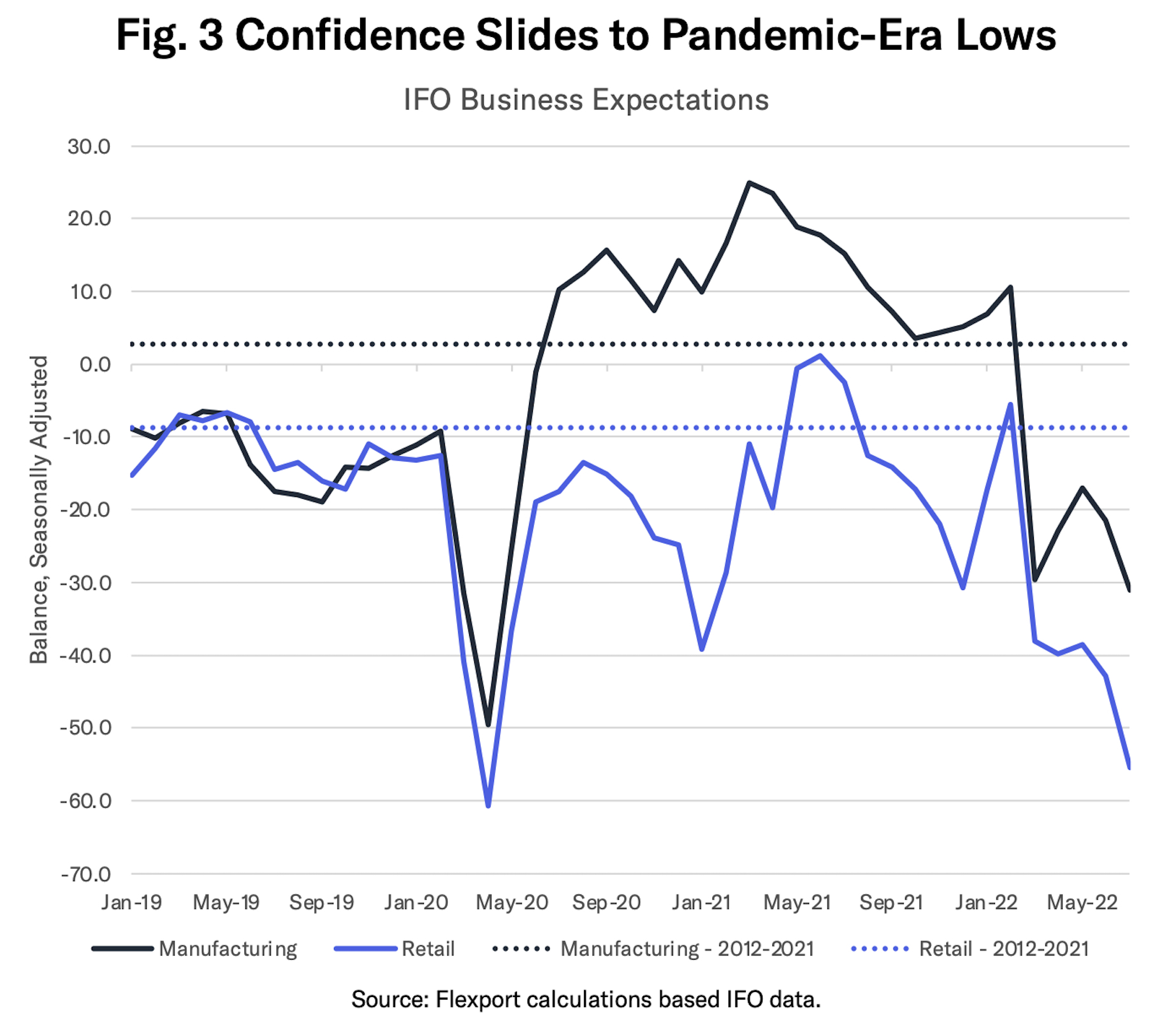 In June, Germany's business expectations in manufacturing reached their lowest since April 2020 according to IFO’s survey. The last time that level was matched was during the depths of the great financial crisis in March 2009. Retail expectations are similarly depressed, with July’s European Commission’s survey sitting at the second worst on record since it began in 1991.

Germany has lagged behind the rest of the EU is in rebuilding inventories of finished goods following the elevated demand period during the pandemic. That may reflect a shortage of components, particularly in electrical goods and automotive products. 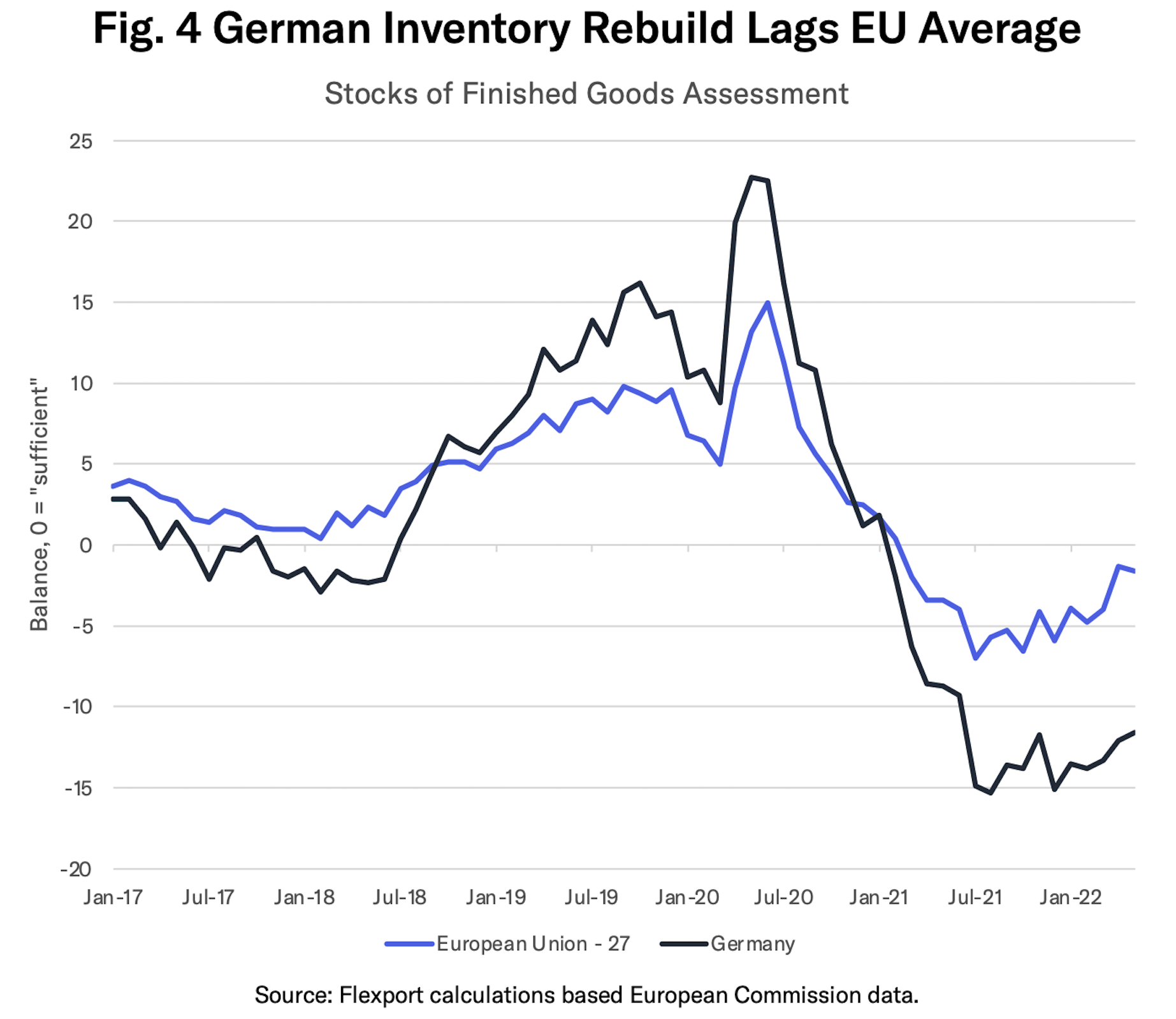 The European Commission’s survey shows the balance of businesses’ views on inventories of finished goods at a net -8.5% (where zero indicates inventories inline with requirements) in June 2022 compared to a trough of 15.3% in August 2021, as shown in Figure 4.

That’s the fifth lowest in the EU and compares to an EU average of -1.0% from a trough of -6.6%. Germany’s inventories both swung higher and fell lower than the EU overall.

Another uncertainty for German manufacturing is the availability of natural gas. A recent political agreement at the EU level will require a 15% reduction in natural gas usage between August 1 and March 31 in response to reduced supplies from Russia.

At the macroeconomic level, a recent academic study shows the cost of losing all Russian energy supplies is up to 3% of GDP, while also noting specific industries might face an even greater impact.

The precise mechanism for implementing the gas restrictions has yet to be determined, though the EU has stated it will attempt to manage the impact on critical industries while still prioritizing domestic heating requirements. Major users of natural gas in manufacturing include chemicals, basic metals, refined petroleum products (e.g. plastic), paper, and food packaging. 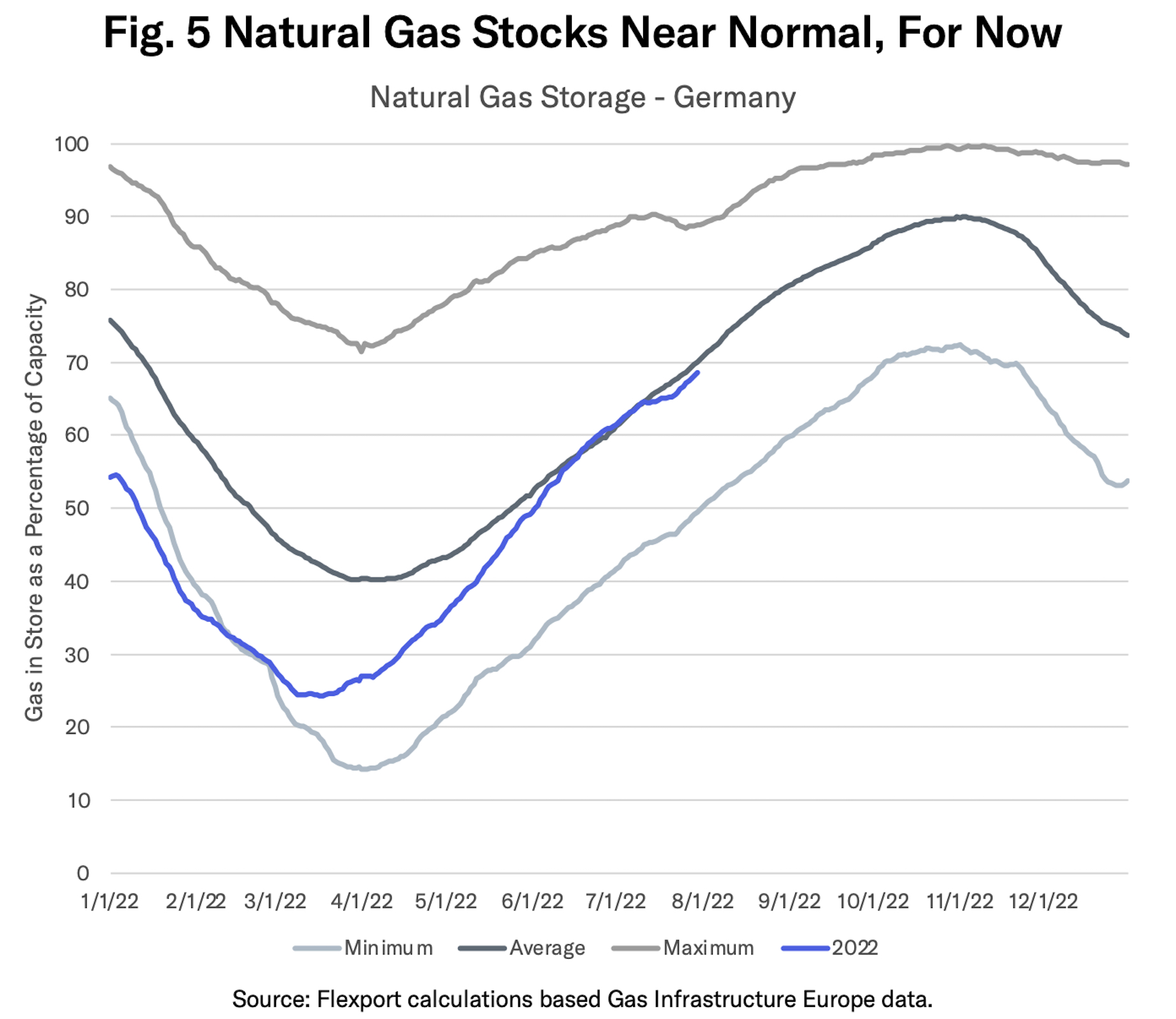 The reduced flows through the Nordstream 1 gas pipeline come at a time when natural gas stocks are being rebuilt for winter usage. As shown in Figure 5, natural gas in storage in Germany is 67% full as of July 25, 2022.

Tracking the state of Germany, and the wider EU’s, gas storage levels during the remainder of Q3’22 will be important in predicting whether industrial supply chain disruptions will arrive during the winter.

Germany’s on Sale, U.S. Is Buying

There may be a silver lining, however, with the German economy being somewhat more exposed to goods exports at 42% of GDP in the 12 months to March 31, 2022 compared to 38% for the rest of the EU. The ongoing weakness in the Euro versus the U.S. dollar could act as a boon for German export competitiveness in the U.S. 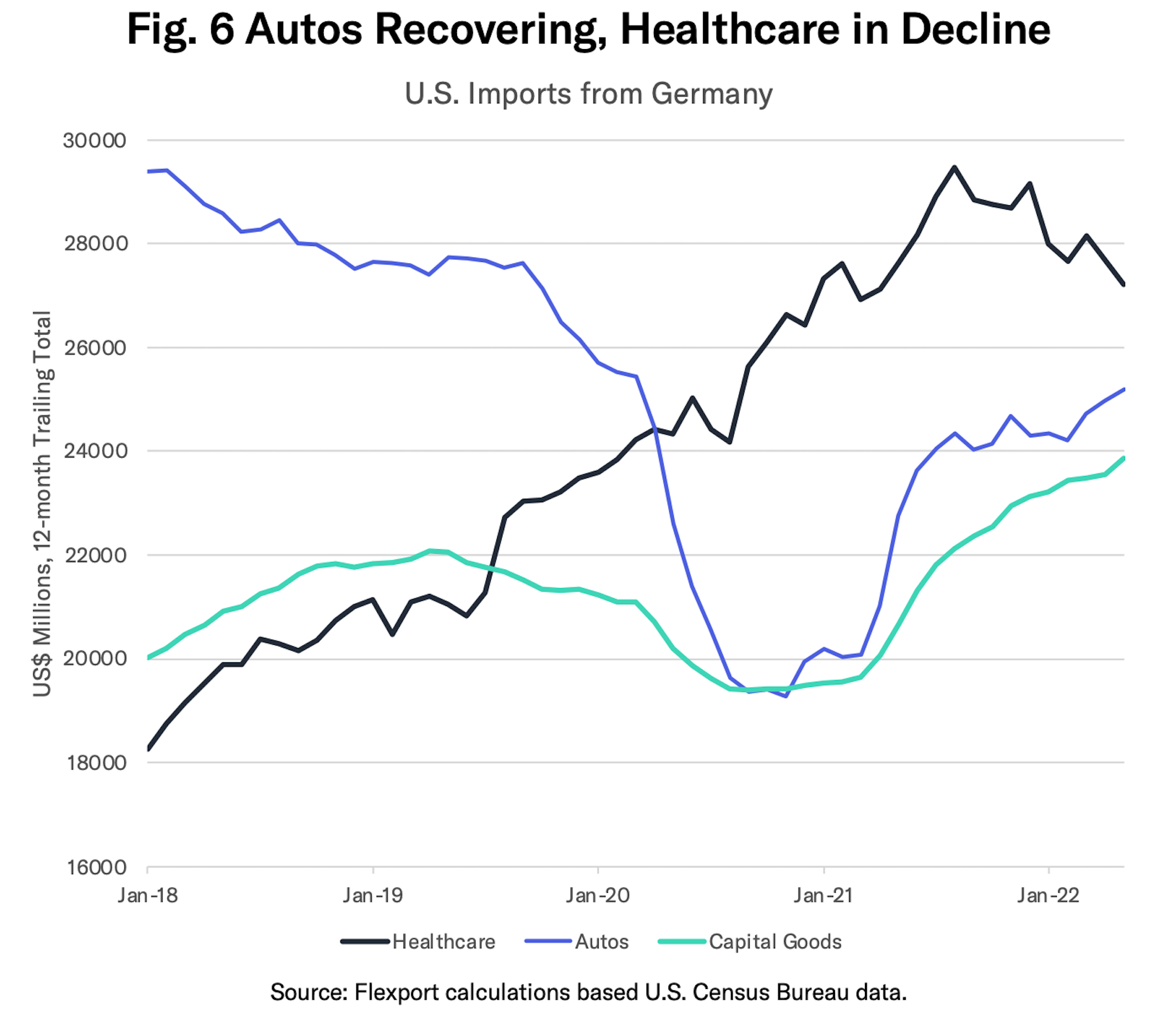 U.S. imports from Germany are dominated by three sectors which together account for 55% of the total in the past 12 months.

The healthcare sector represented 20% of U.S. imports from Germany in the 12 months to May 31, 2022 (source U.S. Census Bureau). Imports have increased by 15.9% in the past 12 months compared to 2019 as indicated by the black line in Figure 6. That included increased demand for medical supplies (e.g. PPE) and pharmaceuticals during the COVID-19 pandemic. Yet, with a 1.5% year-over-year decline in shipments, there may be signs that the pandemic-era demand may be in reverse.

The automotive industry accounted for 18% of U.S. imports from Germany in the 12 months to May 31, 2022 (source U.S. Census Bureau). Imports over that period are down by 3.6% compared to calendar 2019 as indicated by the blue line in Figure 6 above.

The big three German automakers have all indicated that a shortage of components have reduced their production levels, with improvements only set to come steadily during the remainder of 2022.

There are already signs of a recovery, with imports in the past 12 months having increased by 10% year over year in real (i.e. inflation adjusted) terms. Furthermore, growth over the past 12 months has outstripped that of U.S. imports from the rest of the world compared to 2019.

The capital goods sector represented 17% of imports to the U.S. from Germany in the past 12 months, with growth of 15.4% year over year and 11.8% versus 2019. Growth has been led by imports of construction and agricultural machinery and parts which are up by 24.8% year over year.

In conclusion: Germany’s heavier-than-EU-average exposure to industrial activity and declining manufacturing sentiment, combined with uncertainties about natural gas supplies, bodes ill for the economy. Yet, a weak euro versus the dollar may provide export growth opportunities with shipments led by healthcare, autos, and capital goods.

Need to know more about the state of global supply chains, the economy and politics? You can now receive the Weekly Economic Report straight to your inbox every Monday by signing up here.

Germany's economy is more heavily exposed to heavy industry and exports than the rest of the EU.

Natural gas availability is a concern for supply chains that use chemicals, base metals, plastics, paper, and more.

The weak Euro versus the dollar provides an opportunity for German capital goods exporters.

Down, But Not Out - Commodity Price Inflation Drivers Revisited

Riding out a Recession - Prospects for an Economic Downturn