In its latest projections for the global economy, the IMF downgraded economic growth and trade prospects for almost everyone. Key drivers of the gloomy outlook were the conflict in Ukraine, monetary tightening, less fiscal stimulus, a slowdown in China, and the ongoing pandemic. 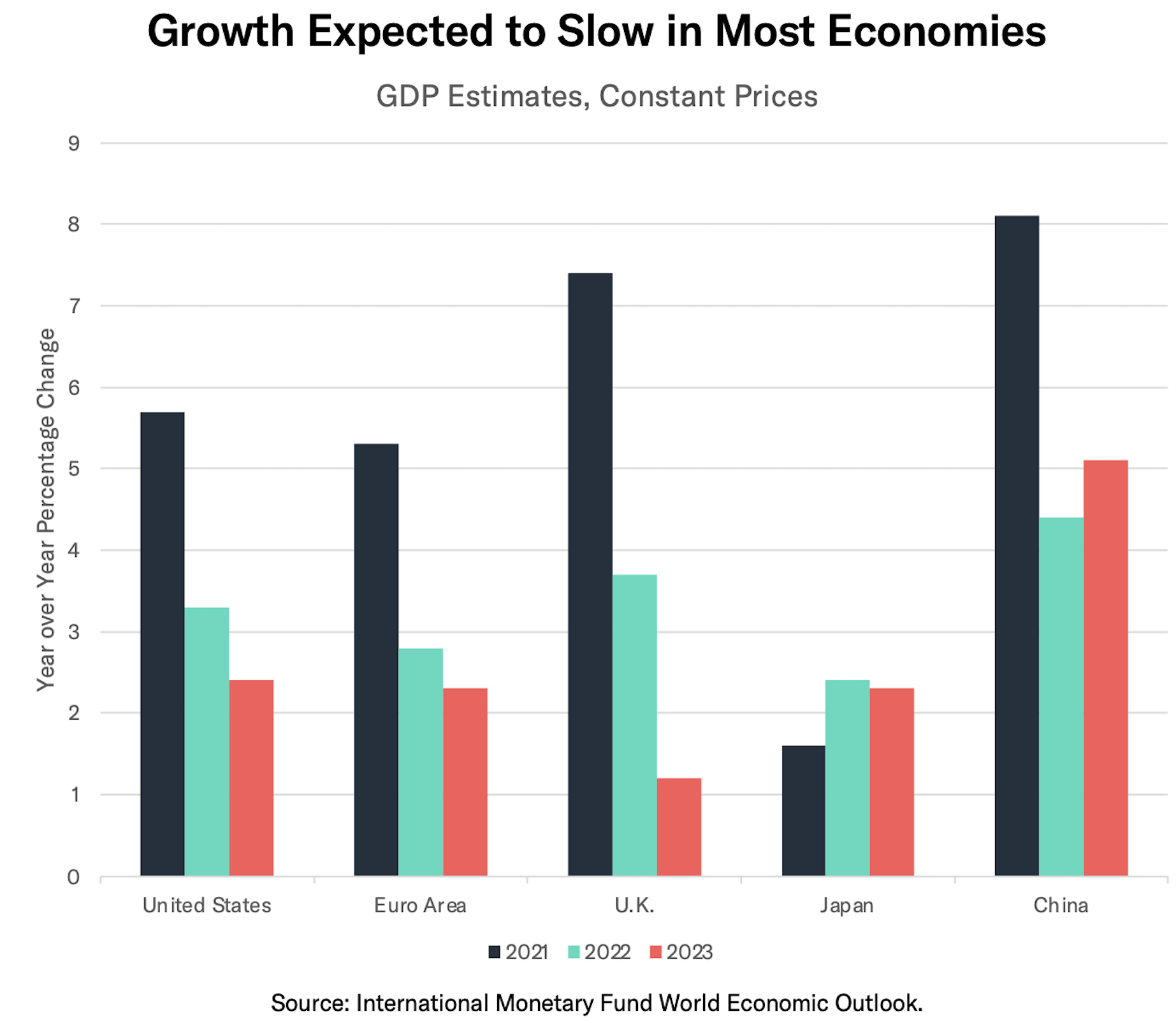 The __International Monetary Fund__’s rose-colored glasses clouded significantly in its latest World Economic Outlook. The latest installment of the regular series called for global GDP growth in 2022 to slow to 3.6% from 6.1% in 2021. This was a downgrade of 0.8 percentage points from the IMF’s January estimate. The downgrades were even more severe for developing countries than for advanced countries.

The chart shows the growth sequence for a number of key countries and regions. All but Japan see a significant dropoff from 2021 to 2022 and for the U.S., the UK, and the Euro Area economic growth in 2023 is forecast to be lower still.

Foremost among the reasons for the IMF’s dimmer view was the conflict in Ukraine. That conflict is seen to have a severe effect on Russia and Ukraine, of course, but also significant spillovers through commodity prices, trade linkages, and labor supply, among other factors. Beyond Ukraine, there is monetary tightening, less fiscal support, and the continuing effects of the pandemic.

In addition to its GDP forecasts, the IMF offered predictions for trade volumes and commodity prices. Advanced country import volume was seen falling from a 9.5% growth rate in 2021 to 6.1% growth in 2022 and 4.5% in 2023. The comparable numbers for developing country import volume were 11.8%, 3.9%, and 4.8%. In almost every case, the numbers were marked down notably from the January forecast.

For inflation, those markdowns are even more striking. The IMF shares the view that inflation is transitory and will recede soon. It predicts 5.7% inflation for advanced countries in 2022, followed by a manageable 2.5% in 2023. But the revision was eye-popping; the 2022 inflation number was 3.4 percentage points higher than the same forecast from October 2021. Inflation has shown a nasty tendency to outlive optimistic forecasts.

As if this were not grim enough, the IMF states that risks to its forecast are large and to the downside. Among these risks it lists a prolongation of the conflict in Ukraine, geopolitical tension, the effects of rising interest rates, the ravages of the pandemic, and a slowdown in China. Stay tuned to see how this all plays out.

China’s GDP expanded 4.8% in Q1 over a year before. Much of the recent apparent slowdown related to the pandemic came at the end of the period and was thus only partially captured in the growth number.

Euro Area inflation rose to 7.4% at an annual rate in March, up from 5.9% in February. Excluding food and energy, the March rate was 3.2%. Separately, German producer prices for industrial products rose 30.9% in the year to March, the highest annual rate since the series began in 1949.

Eurozone manufacturing output dropped to a 22-month low in April while the manufacturing Purchasing Managers Index (PMI) slid to a 15-month low. Both are still expanding but suffering from continued supply constraints, factory closures in China and the conflict in Ukraine.

U.K. retail sales fell by 1.4% sequentially on a seasonally adjusted, weekly average real basis in March. A drop in non-store sales (internet) and auto-fuel were the main drivers. Internet sales suffered due to a return to in-person shopping while lower fuel sales partly reflecting shortages caused by environmental protests.

Japan’s international trade activity surged 22.6% higher year over year in March including a 31.2% rise in imports. As was the case with China, the latter was largely down to higher commodity prices. By volume imports of key materials including basic metals and natural gas declined. By contrast to China though imports of semiconductors increased by 11%.

Higher commodity prices also likely flattered EU trade activity. Total trade with non-EU states increased by 29.6% year over year. That included a 109% rise in imports from Russia driven by higher natural gas prices ahead of the start of the Ukraine conflict. Trade with the U.K. improved versus a year earlier but was still 4.7% below February 2020.

The Biden administration issued a “Buy America” requirement nominally requiring government-funded infrastructure projects to use domestically-produced iron and steel. The rules did, however, include a waiver process in cases in which, for example, such a purchase “would be inconsistent with the public interest.”

Negotiations between the U.K. and India to formulate enhanced trade ties are making slow but steady progress after heads-of-state meetings this week. Key issues are U.K. access to Indian markets and investment deals while India wants improved visa access to the U.K.

Another round of sanctions against Russia may be coming closer after Germany’s unions and employers’ associations reportedly backed a ban on imports of natural gas. As discussed in previous Flexport research that’s one of the largest import lines from Russia but faces significant substitution challenges.

The Russian government is looking to offset the loss of export markets with a call from President Putin to increase self-sufficiency in metals production and uses. It has also suspended publication of trade statistics after similar moves regarding oil output and foreign exchange trading to “avoid incorrect estimates, speculation and discrepancies”.

More Chinese cities are implementing COVID-19 related lock-downs. By contrast to the initial method followed in Shanghai, many of these follow a new, more flexible approach designed to ensure that critical industries can continue operators.

COVID-19 related plant closures are just one of the challenges facing the technology industry. One major chip manufacturing equipment producer has indicated that it sees no slowdown in demand for chips of all types and that demand will exceed supply “well into next year”. The firm is also struggling to keep up with demand for its equipment. 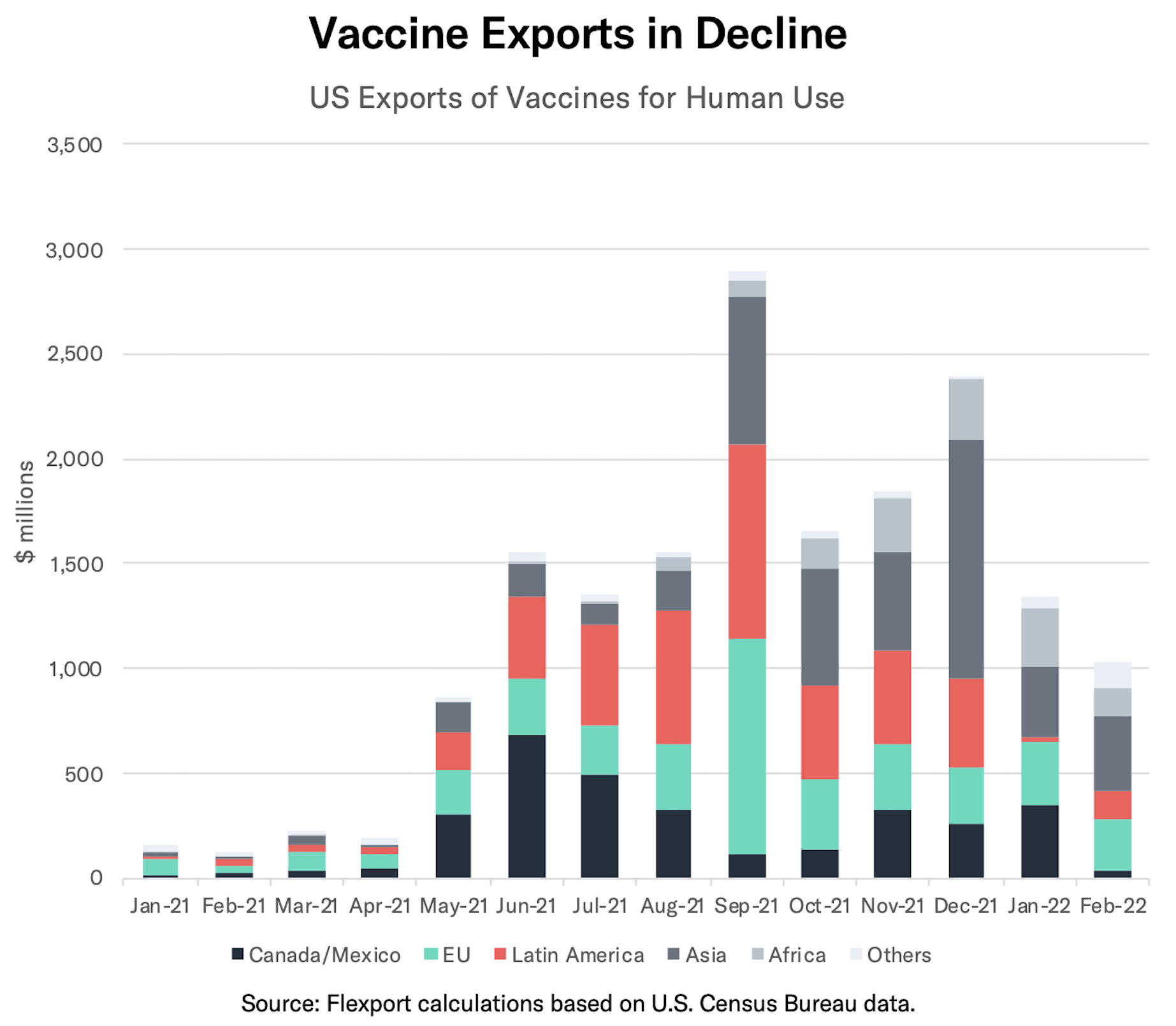 How many vaccines are enough? One of the major vaccine makers has suspended its outlook for COVID-19 vaccine sales due to a “global supply surplus and demand uncertainty” including reported supply chain challenges in emerging markets.

The distribution of vaccines has been a challenge throughout the pandemic, with centralized production in North America, the EU, United Kingdom, Russia and China. Decentralizing production to emerging economies relies on easing intellectual property rules at the WTO level, which thus far has proven problematic.

The chart above shows U.S. exports of all types of vaccines initially focused on the EU and Canada / Mexico and have now switched to emerging markets. Yet, U.S. exports have already started to decline, however, with exports in February down by 43% compared to the Q4’21 average on a days-adjusted basis.