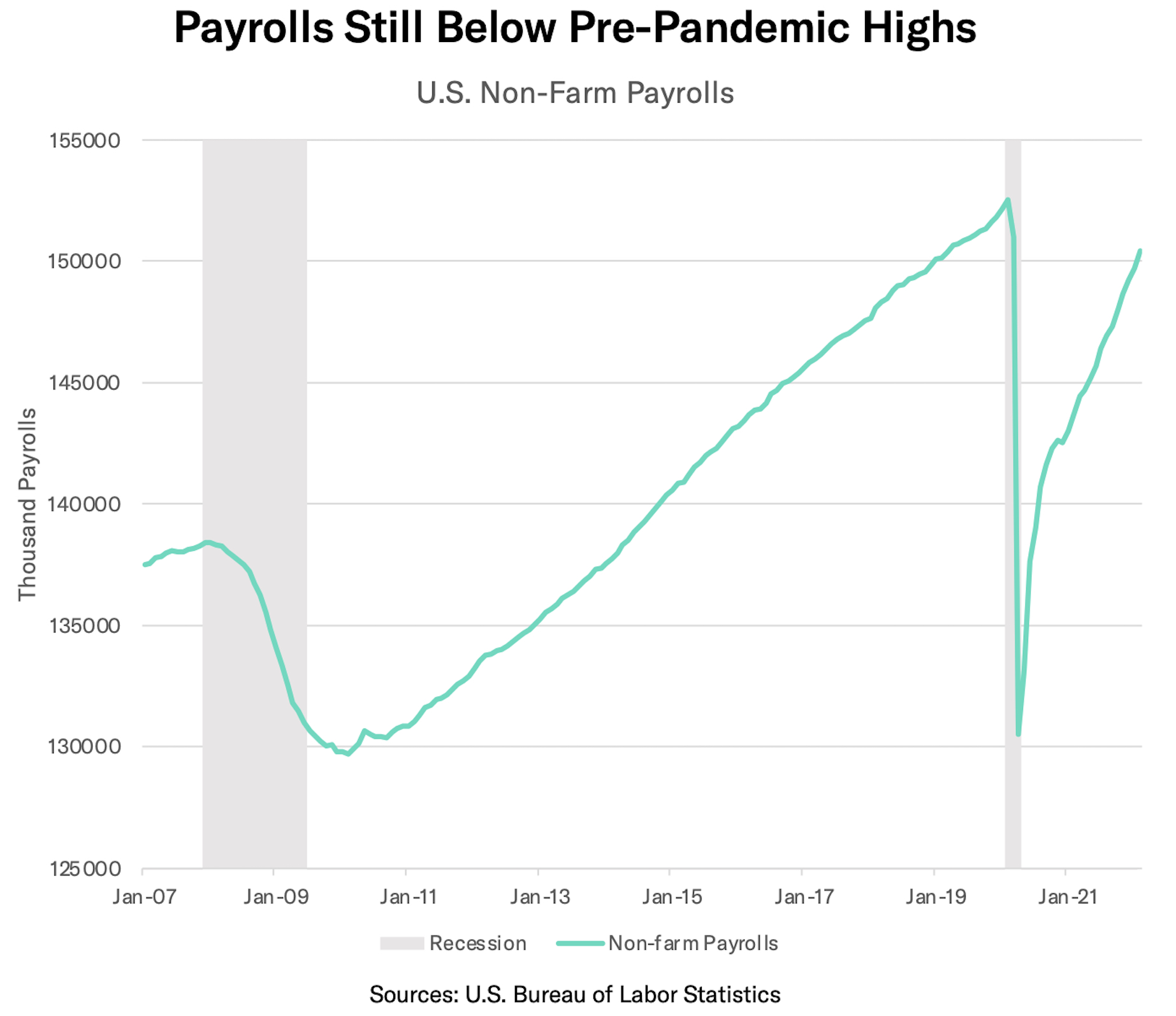 The February employment report showed a strong U.S. labor market. The headline numbers were 678K jobs – well above expectations – and 3.8% unemployment. On top of the high February jobs figure, the numbers for December and January were revised upward by a combined 92K jobs.

These are all shown in the chart. After what had appeared to be a leveling-off in late 2020, employment has grown steadily, with 6.67M jobs created in the last 12 months, an average of 556K per month. The number of jobs has now exceeded the level of March 2019, but remains 2.1M short (1.4%) of its February 2020 pre-pandemic high.

There can be an important discrepancy between regaining the heights of February 2020 and attaining historically strong levels. For example, how low is 3.8% unemployment? The U.S. labor market had unemployment at or below that level for much of the period from May 2018 to February 2020, so it may not seem extreme. However, between December 1969 and May 2018, there was only a single month, April 2000, that had unemployment that low. This is a very strong labor market.

While the strength of the labor market is important in its own right, it is also a key determinant of central bank policy – and thus near-term U.S. macroeconomic prospects. The Federal Reserve has a mandate to focus on full employment and price stability. The latter has increasingly been called into question as inflationary pressures mount. Concerns about the former had been a reason for the Fed not to adopt a tighter policy sooner.

The Fed had previously committed to stop its balance sheet expansion this month. In testimony before Congress this week, Fed Chairman Jay Powell said he would propose that the Fed’s policy-setting committee hike the Fed Funds Rate by 25 basis points (hundredths of a percentage point) when it meets March 15-16. This will very likely be the first of a long series of increases intended to slow the economy, tame inflation, and head off a potentially-overheated job market.

In contrast, the European Central Bank has not committed to increasing rates, although the Euro Area just reported 6.8% unemployment in January, the lowest on record for the single-currency area.

Oil Futures Prices Soar. In off-hours trading on Sunday, oil futures for April delivery topped $130/barrel as traders worried about the worsening conflict in Ukraine. Markets reflect some belief that interruptions will be temporary, as the near-month futures contract has never been so far above delivery contracts for a year later. In mid-February, prices for West Texas Intermediate were just above $90/barrel.

U.S. Goods Imports Increase in January by 1.7% in nominal terms over December, while exports decreased by 1.8%.

EU Inflation Up in February at 5.8% up from a 5.1% figure in January. Inflation was only 2.9% excluding food and energy.

Chinese exports for January-February were up 13.6% year over year in yuan terms, while imports were up 12.9%.

China Sets Low Growth Target. Premier Li Keqiang announced a 5.5% goal for this year, below the 8.1% target for 2021 and the lowest in three decades.

Biden Embraces ‘Buy American.’ In his State of the Union address, the President said, “Instead of relying on foreign supply chains, let’s make it in America.” Later in the week, the White House offered further details about how such a policy would be carried out in government purchasing decisions.