How will sanctions against Russia linked to the Ukraine conflict affect companies? What are firms doing to deal with them so far? Who’s at risk from retaliatory sanctions? This fifth report in our series on the war in Ukraine looks at corporate supply chain reactions to sanctions applied against Russia as of March 1, 2022.

The conflict in Ukraine has led the U.S., EU and their allies to apply wide-ranging sanctions affecting financial transactions and technology exports, as discussed in Flexport’s recent research. This report looks at the actions taken by corporate supply chain operators in response to those sanctions as of March 1, 2022.

It is important to differentiate the specific impact of sanctions on companies from broader challenges caused by physical access to Ukrainian or Russian products. That said, the addition of SWIFT payment systems sanctions means most transactions with Russian firms will become more complicated, while significant exchange rate fluctuations will bring their own difficulties.

In the logistics industry there were already direct sanctions against Russian maritime shipping, to which restrictions to U.K. port access have been added. Dutch customs authorities have also reportedly started blocking shipment of goods bound for Russia through ports in the Netherlands.

Some of the major container lines have started to restrict their services to/from and on behalf of Russian customers because of sanctions while most have already reportedly restricted or redirected services because of port issues in the region.

The Trans-Siberian rail network from Asia to Europe is affected, with Russian Railways specifically sanctioned. That’s already led Flexport to suspend bookings on the routing.

The airfreight industry faces upheaval to routings, as discussed in recent Flexport research, as well as asset ownership due to actions by the leasing companies. Some of the express package delivery firms have also reportedly canceled operations in Russia, though initially for safety rather than sanctions reasons.

Aerospace and Technology - Risk of Retaliation

The major aerospace equipment firms have already restricted their exports of parts to Russia. However, there may be challenges for the manufacturers themselves if access to critical metals is restricted. One supplier has already reportedly started stockpiling titanium while access to aluminum, palladium and nickel could also become a challenge. 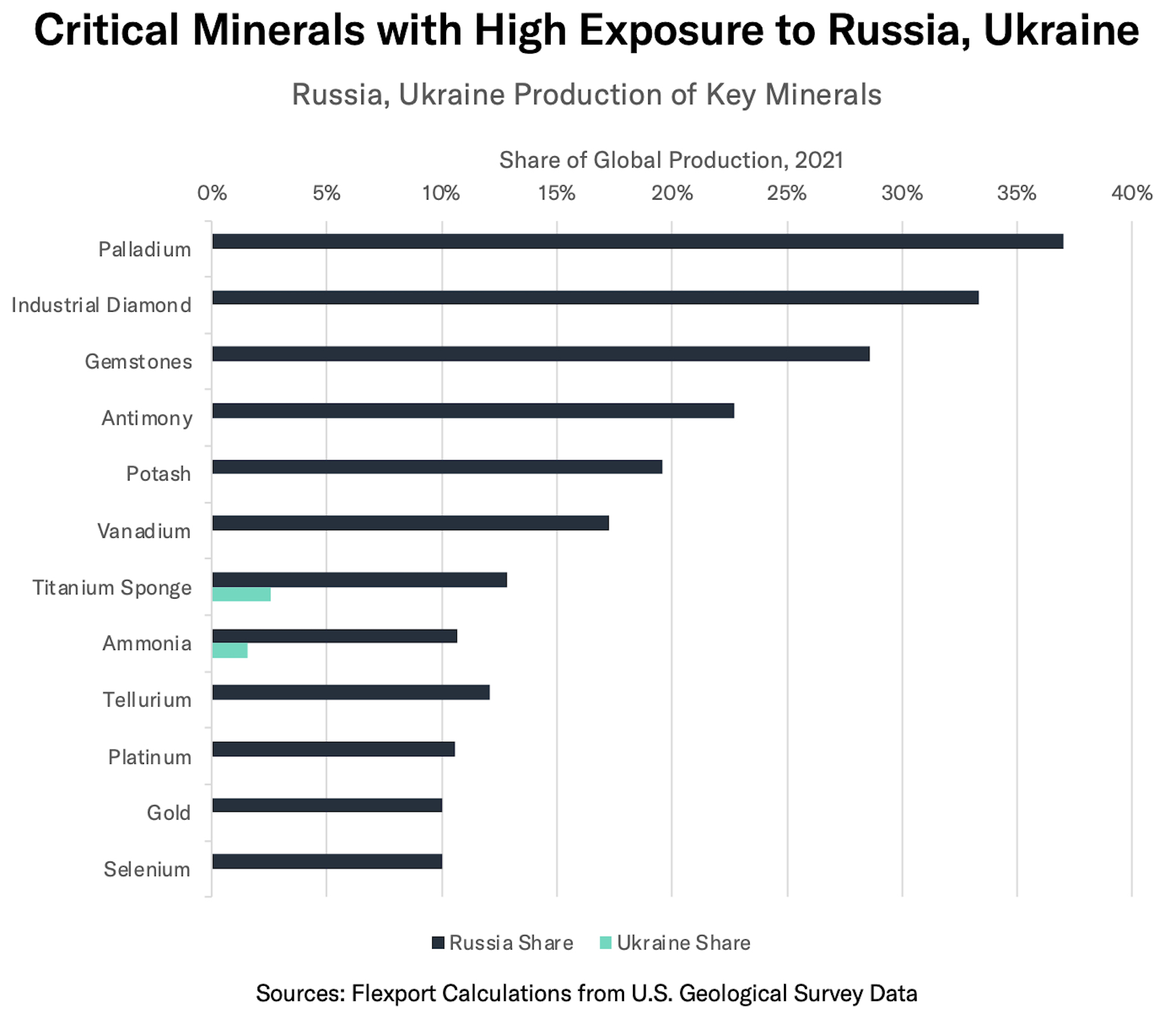 Flexport’s analysis of data from the U.S. Geological Survey shows Russia accounted for 13% of global titanium sponge production in 2021 while Ukraine represented a further 3%. Other significant Russian exports include: 37% of global palladium production, used in catalytic reactions; 23% of antimony, used in infra-red detectors; and 17% of vanadium used in high quality steel.

From a financial perspective it’s also worth noting that Russia accounted for 29% of global gemstone, 11% of platinum and 10% of gold production.

Similarly, the high technology industry faces a mix of export sanctions compliance and potential challenges for accessing critical materials. On the export side, key semiconductor suppliers to Russia have already committed to restricting shipments.

U.S. exports of semiconductors (HS 8542, source U.S. Census Bureau) to Russia were worth just $26 million in 2021 compared to $28 billion of total U.S. semiconductor exports, mitigating the impact on suppliers. It should be noted that the U.S. sanctions also include the use of U.S. technology by third-party-country suppliers, greatly limiting the potential pool of suppliers for Russia. 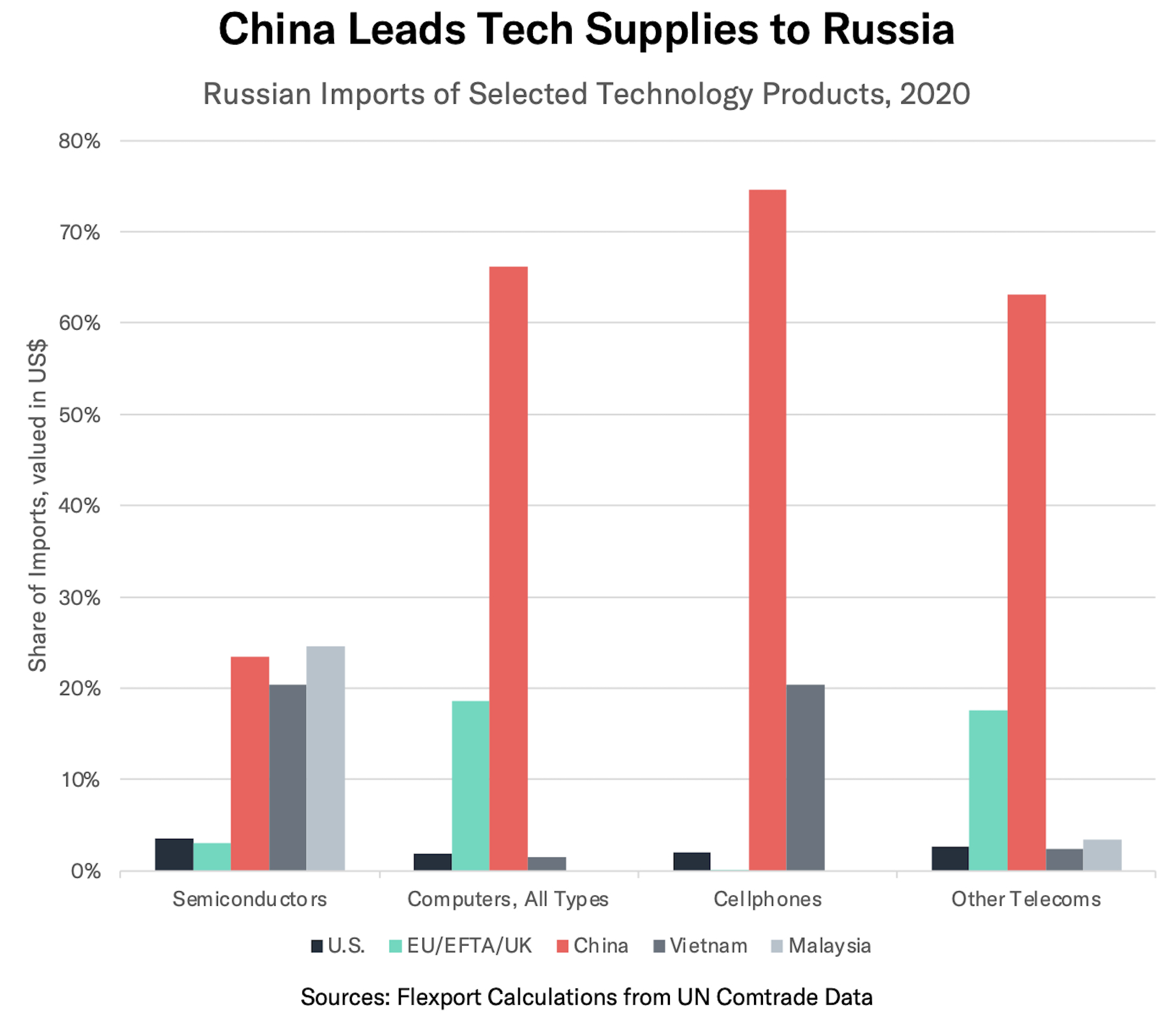 As shown in the chart above, Russia’s imports of high technology products depend largely on China rather than the U.S. The U.S. and EU combined accounted for 6.6% of Russia’s semiconductor imports in 2020, including processors, memory and more mundane controllers. China by contrast accounted for 23.4% and Vietnam 20.4%.

Yet, the squeeze could be felt disproportionately among the more advanced users of semiconductors in Russia, particularly in supercomputing, according to press reports.

Sanctions will likely cover other high-technology products too. U.S. and EU supplies of computers accounted for 21% of Russian imports while China represented 66%. The U.S. and EU accounted for 20% of telecoms network equipment, ranging from 5G cellphone base stations to network routers, versus 63% from China.

There are risks for the technology industry from the conflict. In terms of critical materials, Ukraine is a major supplier of chemicals including neon, xenon, krypton and C4F6, the loss of which could affect semiconductor production.

The issue there, though, is access rather than sanctions, and the industry body SIA has indicated supplies are currently diversified.

The industrial manufacturing sector faces a mixture of restrictions on export sales to Russia, reduced ability to source and pay for components from Russia, and curtailed operations within Russia itself.

The sanctions applied by the European Commission include the supply of oil and gas industry equipment, which could impact Russia’s refinery capacity, as well its ability to exploit new natural gas and oil resources and develop liquefied natural gas and pipeline export capabilities.

The automotive industry faces all three challenges. As noted above, sourcing of palladium, platinum and aluminum globally is dependent on supplies from Russia and may become more expensive.

Several automakers and parts producers, including tire makers, have warned of their reduced ability to import car parts to Russia and will therefore cut manufacturing in the country or move production to other countries. Luxury car sales and motorbike supplies, particularly from the United States, are also in the process of being restricted.

Industrial goods manufacturers are having to address the operations of their Russian joint venture manufacturing, facing a combination of challenges including parts supplies and payments.

In conclusion: The conflict and sanctions are evolving rapidly. Corporate reactions are only at an early stage and face yet another source of increased supply complexities and costs.