We knew the Fed was going to tighten, but this week brought market-shaking news about how and how fast. It will be a rarely-tried balancing act between hiking the policy rate and selling off assets. 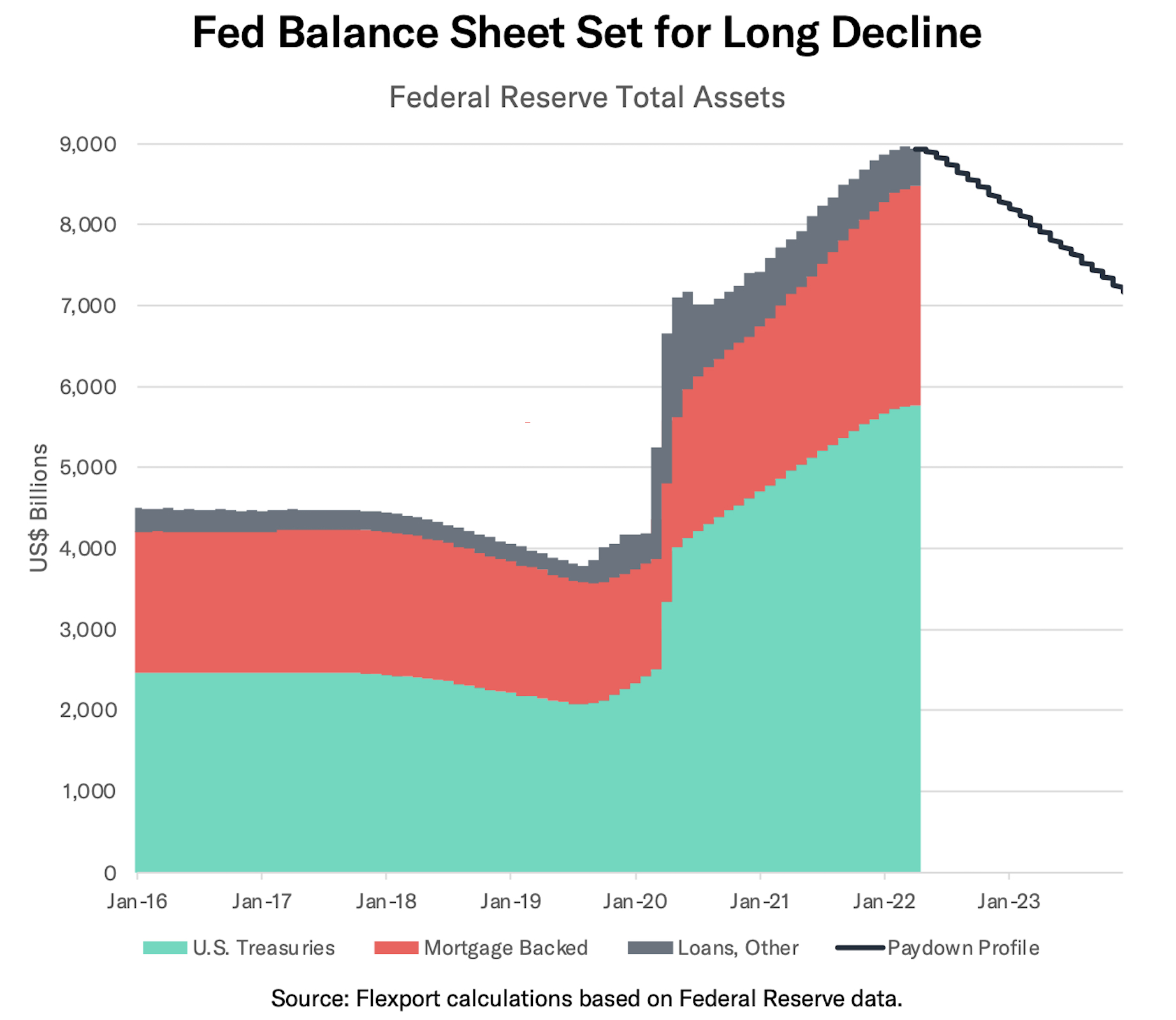 There was no official move by the Federal Reserve this week, and yet credit markets moved dramatically. The benchmark 10-year Treasury started the week with yields below 2.4% and ended it above 2.7%. So why the big swing?

The Fed has made clear that it would tighten monetary policy. The big questions are then how to tighten and how fast? The news this week came when Fed Governor Lael Brainard addressed both questions by discussing how the Fed might sell off some of the assets from its engorged balance sheet.

To put this in perspective, recall that traditional monetary policy is guided by moving a policy interest rate (the Fed Funds rate) up or down. Up is tightening, down is loosening. This is a very short-term interest rate, but its movements tend to affect longer-rate bonds as well.

In 2008 and then again in 2020, while moving this rate to bolster the economy, the Fed smacked into the “zero lower bound” – an ornate way of saying that without resorting to negative interest rates, the Fed Fund rate hits a wall and can go no lower. So in each case, the Fed took to buying longer-term bonds directly (aka quantitative easing). Those bonds built up the Fed’s balance sheet, as shown in the chart. Each purchase pumped dollars into the economy.

The Fed had previously made clear that it would stop adding to its balance sheet through quantitative easing (it did) and that it would start raising the Fed Funds rate (it just did). It had been less clear what the Fed intended to do with the nearly $9 trillion of assets it now had. That was the point Dr. Brainard addressed; she said the Fed was likely to sell them fairly quickly.

No particular plan has been agreed yet, but she spoke of going more quickly than the previous sell-off rate of $50bn/month. This was a faster tightening than markets had anticipated and was particularly notable, since Dr. Brainard had been seen as one of the less aggressive Fed board members when it comes to tightening.

The chart shows an ‘artist’s rendering’ of what such a sell-off in Fed assets might look like. It assumes a pace of $95bn per month, or just over $1tr per year. The number ends up being large relative to the amount of bonds that Treasury and mortgage-backed markets need to absorb each month, but small relative to the expanded balance sheet.

On top of this, the meeting minutes released from the last Fed rate-setting meeting showed “many” governors willing to raise rates by 50 basis points (1/2 percentage point) – twice the hike that was ultimately adopted.

So how tight will monetary policy get? How will rate rises interact with bond sell-offs? How readily can bond markets handle the additional supply – i.e., how high will long rates go? Unfortunately, when it comes to quantitative tightening, there is only one prior period to look at in the U.S. – 2017 to 2019, when the move was less drastic and the economy was in a different place. But these are the questions market participants began to worry more about this week.

In other research we took a deep dive into the impact of the Ukraine conflict on rail networks and provided two reports looking into the history of sanctions broadly and their application against Russia during the conflict.

EU retail sales on a deflated, seasonally adjusted basis increased by 0.3% in February versus January after inching 0.5% higher in January. On a year over year basis food sales fell by 1.2% while non-food store sales rose by 9.5%. The latter came at the expense of internet sales which fell by 5.1%, suggesting the back-to-store trend is continuing.

U.S. auto sales fell by 4.6% sequentially in March on a seasonally adjusted basis to their lowest since December. That follows a 0.4% dip in manufacturing in the U.S. in February due to ongoing electronic parts deliveries.

U.S. international trade activity increased by 1.5% sequentially in February and by 21.8% compared to the same month a year earlier. Services imports climbed 5.0% sequentially on the back of higher IP payments likely linked to the winter Olympics. Goods imports rose by 0.6% to reach another record high, though inflation is playing a part.

U.K. GDP increased by 0.1% in February, down from growth of 0.8% in January. Services expanded by 0.2% due to increased healthcare and scientific spending while real estate and manufacturing all declined. While exports jumped 15.0% sequentially that was largely due to statistical reporting changes in January - when compared to December they dipped by 5%.

Producer price inflation in China reached 1.1% month-on-month in March, the fastest rate in the past five months, likely due to continued commodity price increases including oil which rose by 14.1% and processed fuels up by 7.9%.

Oil prices have retreated significantly. After shooting up in late February with the onset of the Ukraine conflict, both Brent and WTI are now back near their pre-conflict levels, down over 20% from highs of just over a month ago.

The French Presidential Election will go to an April 24 runoff between current President Emmanuel Macron and challenger Marine Le Pen. Among their policy differences are their stances on European integration and trade.

India and Australia have signed a wide ranging trade deal which will cut tariffs on 85% of Australian exports (rising to 91% over 10 years) and 96% of Australian imports as well as liberalizing trade in services.

Government funding for semiconductor manufacturing plants is back on the agenda, with the Spanish government reportedly planning 11 billion euros of investments. The move is somewhat unusual given the EU has similar plans though Spain is using separate, COVID recovery funds.

The EU, U.S. and others have continued to widen their sanctions against Russia, with particular emphasis on energy supply chains and financial controls.

The European Union has approved new sanctions that will focus initially on a ban on imports of Russian coal and may be expanded to include oil in the future. Notably the coal measure won’t come into effect until August and Russian exporters are already reportedly boosting shipments to China, being paid in yuan.

The U.S., EU and others are also introducing strict investment sanctions and blocking sanctions on working with Russia’s largest financial institutions. The U.S. and EU are also reportedly discussing even stronger energy sanctions against Russia. 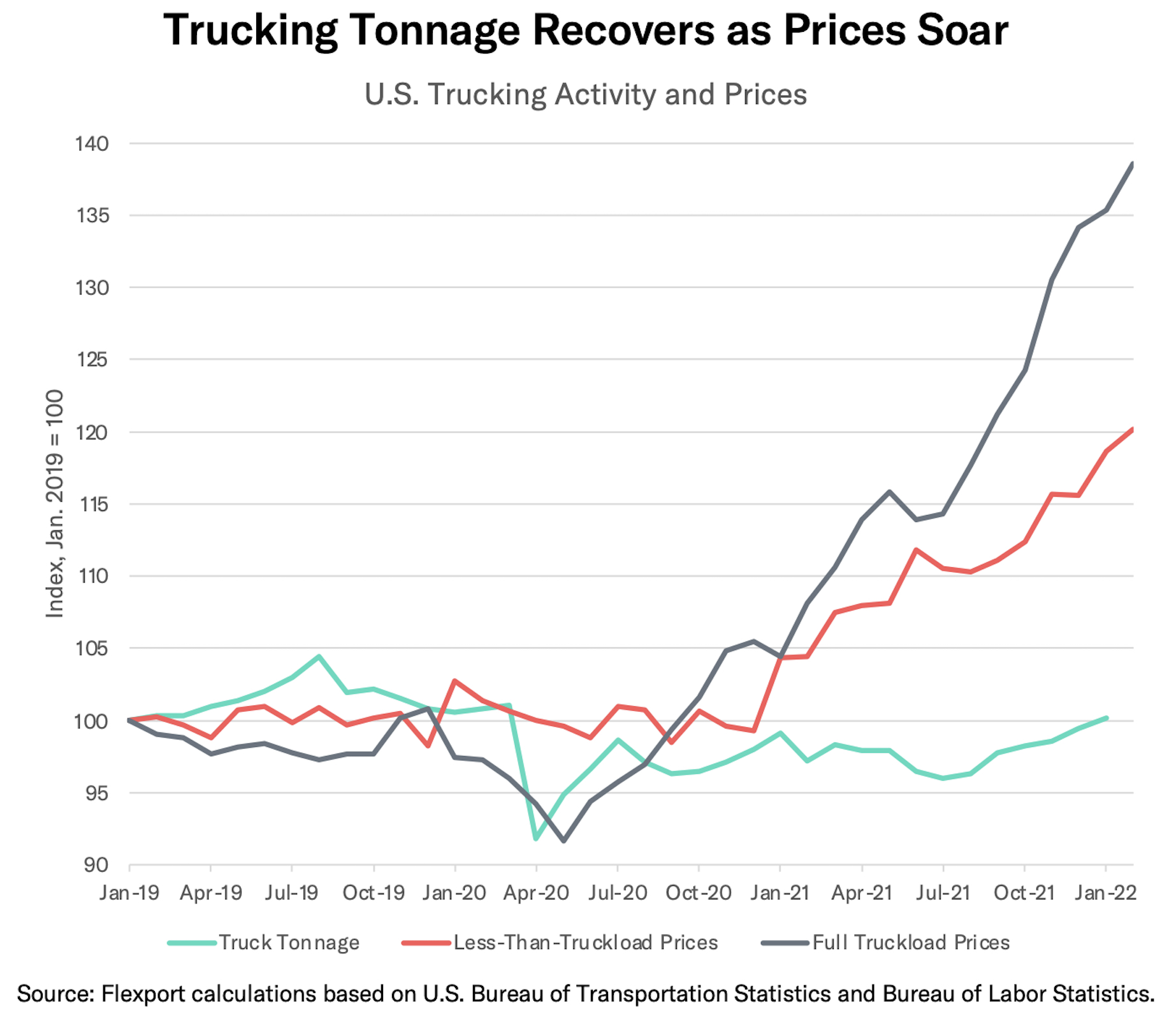 The U.S. trucking industry has been beset by a shortage of drivers and equipment during the pandemic. This week the Biden Administration released an update on their efforts to boost trucking jobs, including streamlining the license process, launching apprenticeship programs, and investigating predatory lease agreements. But what state is the trucking industry in right now?

The chart above shows volumes carried only just returned to 2019 levels in January while the Producer Price Indices for full- and less-than-truckload services have soared. The latter reflects rising fuel costs as well as higher pay. Orders for new trucks - arguably a gauge of truckers’ sentiment about the future - increased by 14% in Q1’22 versus Q4’21 but were 50% below Q1’21 according to data from FTR Transportation Intelligence.