To go on a goods buying spree, it helps to have money. This week we look at trends in real disposable income for American consumers and see how compensation is partially replacing government transfers. The balance has meant lowering income but steady consumption – so far. 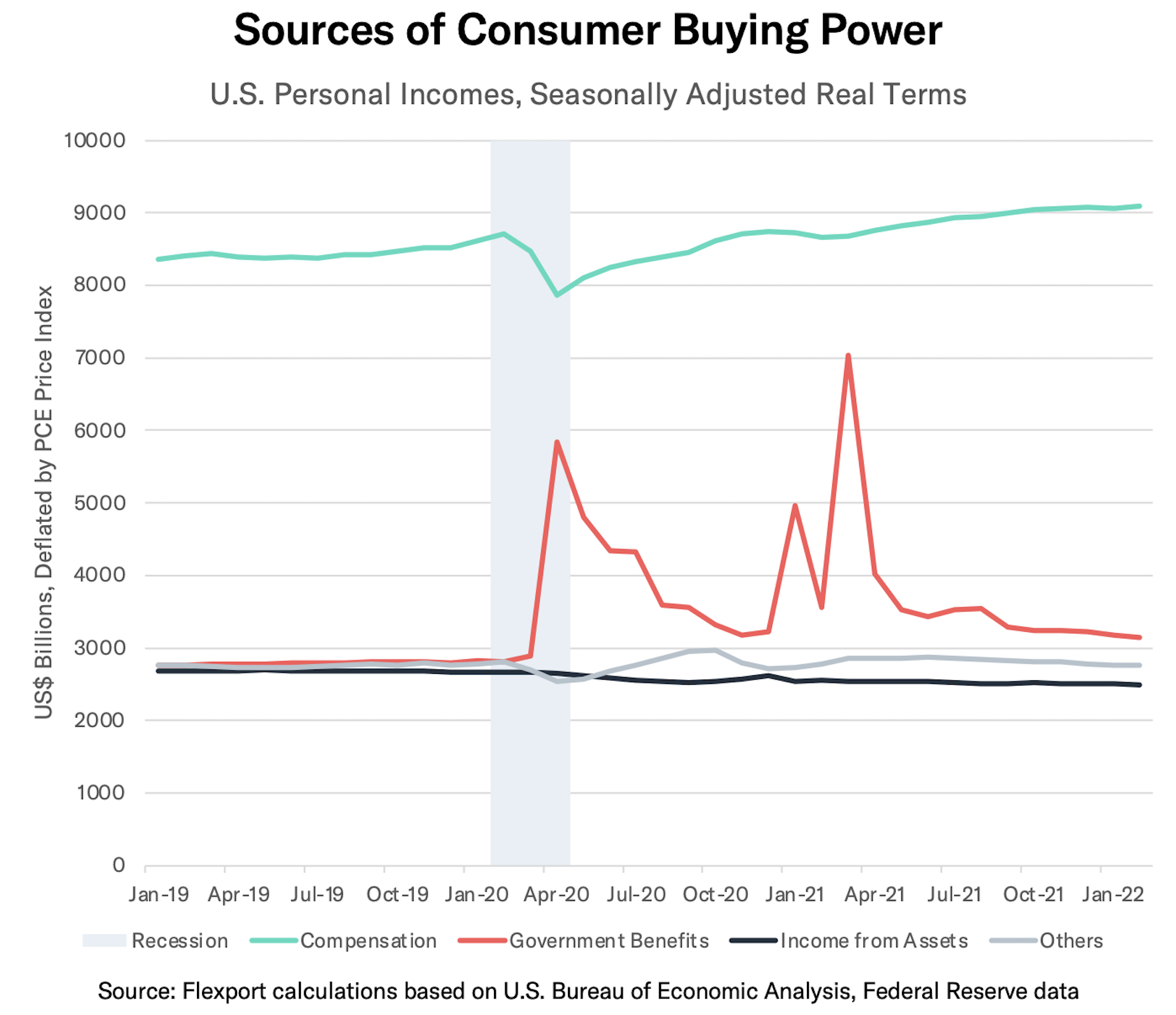 When will the goods consumption boom peter out? Or will it? The most telling monthly release to keep tabs covers developments in “Personal Income and Outlays.” The February data described a fall in real personal consumption expenditures, with real goods consumption dropping by 2.1% and real services consumption rising by 0.6%.

Before declaring an end to the boom, however, note that there was a significant upward revision to the January consumption growth data, boosted from a previously-reported gain of 1.5% to a revised 2.1%. Goods consumption was up 5.6% in January. A volatile series like this can make it difficult to establish a trend.

If one tries to look past monthly jags and takes a longer view, we find that over the past six months, real goods consumption was up 0.3% and real services consumption was up 1.7%. Even though inflation is rising fast, these are moving faster. In combination, this eases away from the extreme tilt toward goods and away from services that we saw a year ago, but leaves that tilt roughly where it was in the summer of 2020 (and, at a PCI measure of 95, extremely close to Flexport’s forecast of 93).

What comes next? A key determinant is real disposable income – the amount of money people have to spend, after taxes and inflation are accounted for. In last week’s report, real disposable personal income was down 0.2% in January. The figure has ticked down every month since July 2021.

The graph above shows how the different components of disposable income have moved since the onset of the pandemic recession (the vertical gray bar in the chart).

As one might have expected, the top line – employee compensation – fell with the recession. But this drop was more than offset by a large jump in “government social benefits to persons” – headlined initially by the CARES Act and then later by the American Rescue Plan. On balance, the effect was to significantly increase Americans’ spending power. Some of the money went to purchasing goods and services, while some was saved.

As those government programs have subsided, we have seen real disposable income go down steadily, but not a lot. The February figure was down 2.8% from the July figure. We have seen some spending supported by less saving (from July to February, real personal saving was down 42.3%).

So what comes next? There’s little prospect of a new big fiscal infusion. There’s obviously a limit on how much savings can be drawn down. The real question is what will happen with compensation – the green line in the graph. Can nominal wages outpace inflation and sustain the consumption boom?

In other research we’ve examined the latest lockdown in Shanghai and the potential impact of slowing consumer goods spending on TPEB shipping lanes.

The U.S. economy is running hot with low unemployment and rising inflation. In March, the economy added 431K jobs and the unemployment rate dropped to a very low 3.6%. The prime age (25-54) employment-population ratio rose from 79.5% in February to 80.0% in March. That compares with a pre-Covid peak of 80.5%.

European jobs and prices rise, while sentiment sags. Euro area unemployment in February registered 6.8%. While that is higher than the United States, it is the lowest measured unemployment since at least 2008. A major challenge for European policymakers will be the spread of rates across countries: Germany at 3.1%; France at 7.4%; Italy at 8.5%; Spain at 12.6%.

U.S. retail inventories increased by 1.2% sequentially in February on a seasonally adjusted basis. That meant that the retail inventory / sales ratio for February increased to 1.11x from 1.09x a month earlier. While lower than the 2009 - 2019 average of 1.24x it is a marked recovery from the 1.06x which applied during 2021 until December.

U.S. international trade activity increased by 0.7% sequentially in February versus January, with imports up by just 0.3%. That was flattered by inflation with deflated imports down by 1.0% sequentially. Trade is still elevated versus historic levels though, with nominal growth of around 10% year over year and around 20% versus February 2020.

South Korea’s exports increased by 18.2% year over year in March. That was ahead of economists’ expectations but slower than a month earlier. The slowdown included a 36% drop in exports of ships and a 9.7% slide in exports of cars. Semiconductor exports rose 38% and set a new record high.

The U.S. Trade Representative, Ambassador Katherine Tai, has indicated that the U.S. will “need to turn the page on the playbook” on relations with China and will “expand beyond only pressing China for change”.

Fertilizer prices have set repeated record highs during the conflict. That partly reflects higher natural gas prices as well as sanctions against Belarus. There’s also been evidence of stockpiling by farmers. Russia and China have curbed exports. That’s led one large seed manufacturer to warn that global food security is “facing serious threats”.

Aside from food, energy commodities remain at the center of the global economic fallout from the Ukraine conflict:

Sanctions are likely to continue to widen. The U.S. for example has indicated plans to restrict exports of military dual use products to Russia, following restrictions on sole-use military products previously. 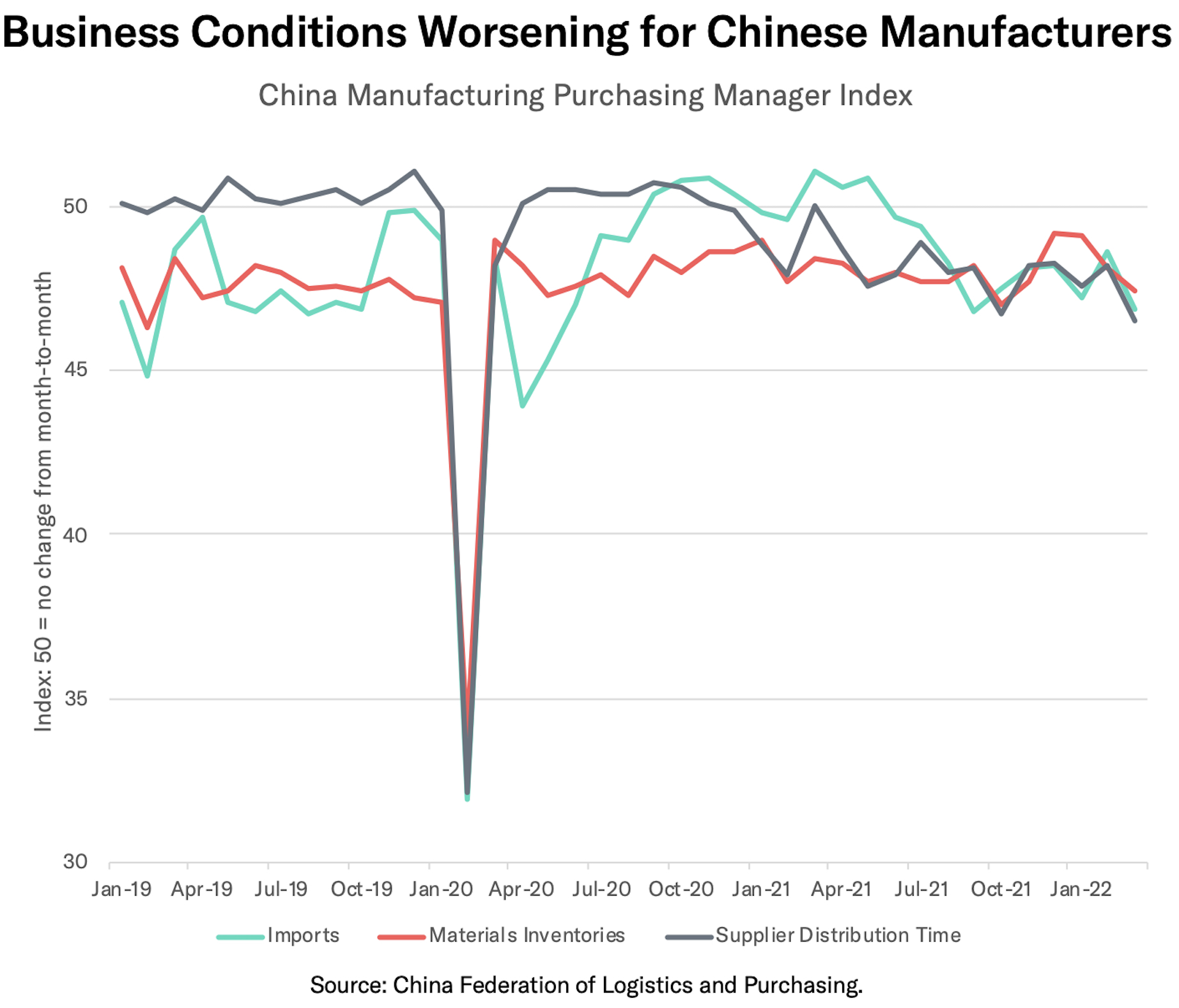 Business sentiment among Chinese manufacturers dropped to 49.5 in March according to CFLP data. That marked a drop into contractionary territory (below 50) for the first time since October. Importantly, the data in the chart above also shows that inventory challenges faced by importers in the U.S. and Europe are also besetting their suppliers in China.

Import order expectations dipped to their lowest since September while materials inventories were at their worst since May 2020. A turnaround in the near-term may be unlikely. Supplier distribution timeliness also dropped to its worst since the depths of the first round of the pandemic in February 2020 and the lockdowns in Shenzhen and Shanghai may cause further disruptions.