The World Bank just cut its forecast for global economic growth significantly from its estimates of six months ago. Rising interest rates are expected to seriously constrain growth, while high debt levels may limit countries’ ability to cushion the effects. Trade growth is expected to slow alongside real GDP. 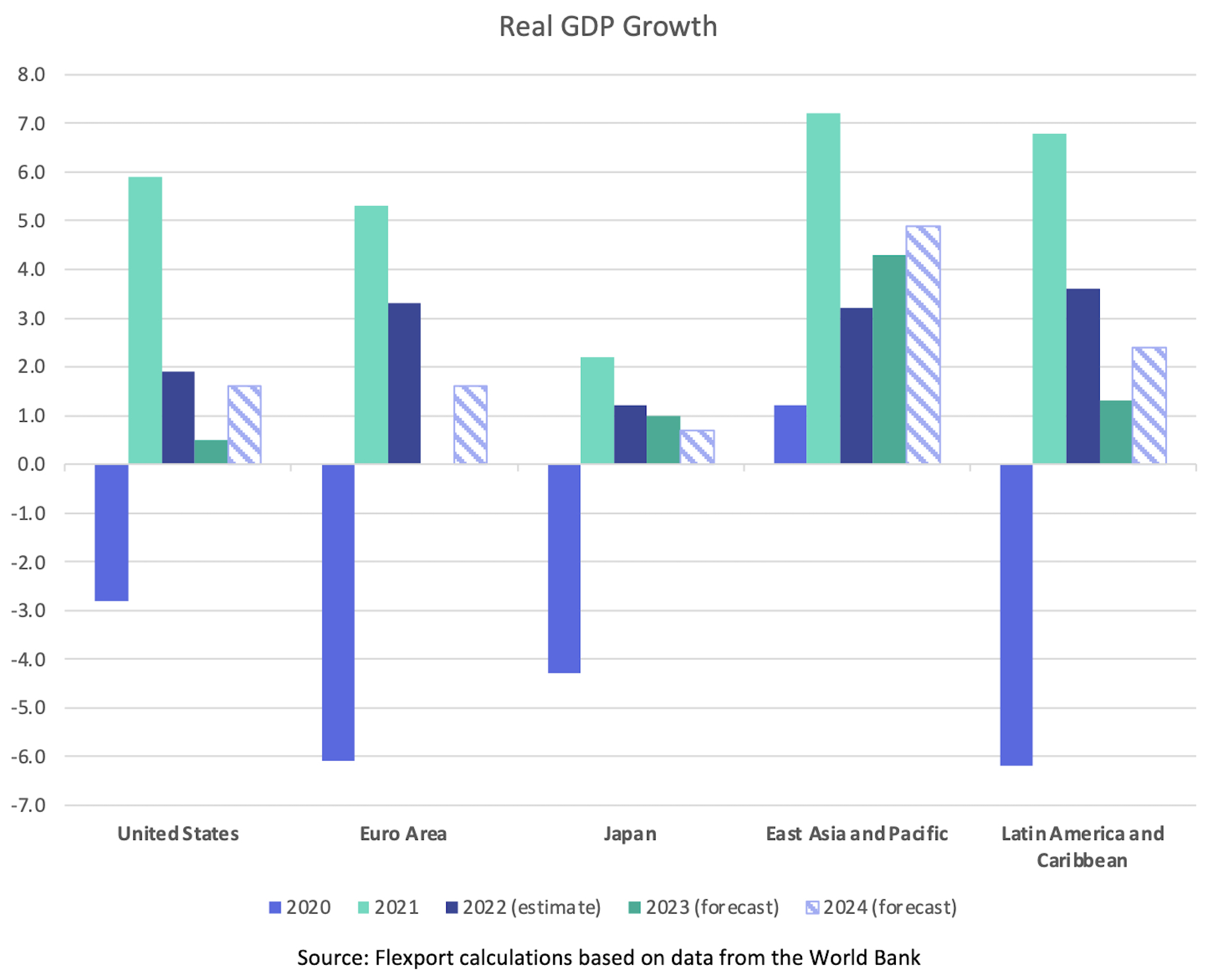 The World Bank came out with a grim take on the global economy this past week. In its latest Global Economic Prospects report it drastically downgraded its forecast for global growth to 1.7% in 2023, marked down from an expected 3.0% just six months ago. The downward revision was most severe for advanced economies, which are expected to average 0.5% growth in 2023, down from an earlier estimate of 2.2%. For emerging markets and developing economies, growth forecasts were trimmed to 3.4% from 4.2%.

As shown in the chart, the US, the Euro Area, and Latin America and the Caribbean share a similar growth pattern, even if the actual rates differ. After a sharp Covid contraction in 2020, there was strong rebound growth in 2021, followed by more modest but respectable growth in 2022. In each case, the forecast is for significantly reduced growth in 2023 followed by a rebound in 2024 that still features slower growth than we saw in the last two years. In all but Latin America’s 2024 forecast, the latest growth forecasts are lower than they were six months ago.

In Asia, the chart shows a different picture, with steadily declining growth in Japan and steady improvement forecast for the emerging countries of East Asia and the Pacific.

The Bank attributes the global economic predicament to a necessary but difficult policy response to the burst of inflation that emerged in the pandemic. That response has consisted of an “unexpectedly rapid and synchronous monetary policy tightening around the world” to rein in rising prices. The report notes that economists generally expect significant lags between monetary policy tightening and the economic effects of that tightening. Given the recency of the central bank moves, that means serious challenges are yet to come.

For the developing world, the Bank notes a particular concern that the emerging market debt is at a 50-year high. One consequence is that, as economic conditions worsen, there is relatively little capacity (“fiscal space”) for countries to borrow to counteract the effects.

The World Bank’s forecast for global trade volumes remains positive, with 1.6% growth predicted for 2023 and 3.4% for 2024. Those numbers are below the estimated 4.0% in 2022 and feature a drastic reduction for 2023 – 2.7 percentage points below the estimate from six months ago.

One of the Bank’s central prescriptions for how to address this worrisome outlook is “Stronger cooperation to increase cross-border trade.” Specifically, the report calls for more access to trade finance, trade facilitation through deals such as customs agreements, and a reduction in arbitrary barriers to imports and exports.

The US Consumer Price Index showed persistent high inflation in December. If that take sounds gloomier than many news accounts, it’s because the components of the report moved in different directions. Optimists noted that the overall price level fell by 0.1% for the month and that CPI inflation was 6.5% over the last 12 months, notably lower than some earlier readings. Yet core CPI (less food and energy) rose by 0.3% for the month and “services less energy services” rose by 0.5%. Over the last 12 months, these more stable measures show inflation at 5.7% or 7.0% respectively, both well above the 2% Fed target.

US Wholesale Inventory-Sales Ratio Rose to 1.35 in November from 1.32 in October. The numbers are comparable to 2019 levels, but up notably from 1.21 in November of 2021. The increase reflected a 1.0% monthly increase in inventories and a 0.6% decrease in sales.

UK GDP Grew in November by 0.1%, following growth of 0.5% in October. The figures reflect growth in the service sector and contraction in the production sector.

Euro Area Exports Increased by 1.0% from October to November on a seasonally-adjusted basis, while imports declined by 3.8%. Without seasonal adjustment, comparing January-November 2022 against 2021, Euro Area exports grew by 18.9% and imports by 40.5%.

Treasury Secretary Janet Yellen warned that the US would hit its debt ceiling on Thursday. That does not mean that a crisis is at hand—there are measures the Treasury can and will take to delay a default. Yellen predicted that those measures could be exhausted by June. There is the potential for conflict between House Republicans and the Biden administration over whether policy restrictions such as spending limits should be attached to any increase in the debt ceiling.