While the economy appears to be contracting and retailers worry about increased inventories, the job market in May and June continued to show strength. These hot and cold conflicting signals about the economy are highly unusual. 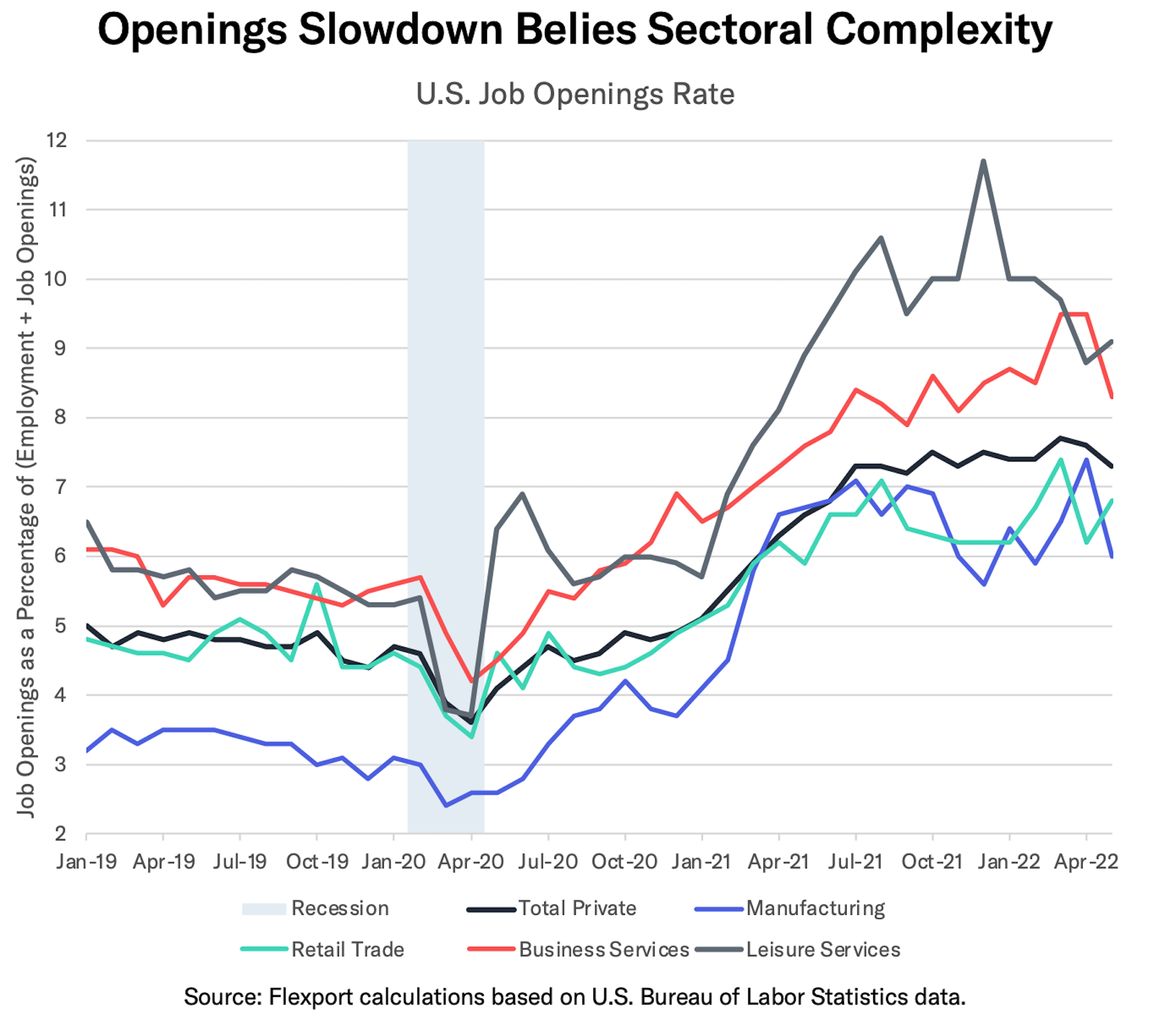 How do we know whether an economy is humming along at the right pace, overheating, or slowing down? One obvious thing to check is GDP growth. Lately the figures for that have been troubling, showing a contraction at a 1.6% annual rate in Q1. That covers through March. We won’t have even a preliminary estimate for Q2 GDP growth until July 28.

Perhaps, for a more recent reading, we could look at a correlate of GDP growth – for example, the state of the job market. We care about that not just because of its ability to predict GDP, but because of what it says about conditions facing workers. This week we just received a lot of data about the labor market in May and June.

The puzzle is that this new data seemed to contradict many of the more worrisome predictors of GDP. By a range of different measures, the job market in June looked strong. The headline numbers on Friday showed an unemployment rate holding steady at 3.6% with 372K new jobs, well above the 250K that some forecasts had called for. The employment-population ratio was essentially unchanged at 59.9%.

Earlier in the week, data were released on May job openings, which also showed continued job market strength. These are distinct from net employment changes, but have proven to be a reliable indicator of market strength. The chart shows both an overall reading on the rate of openings – the black line for “Total Private” – as well as detail on a number of sectors. The time period of over three years allows us to see how this labor demand compares to pre-Covid norms.

The rate of total private openings is not far off the rate we saw a year ago. Retail Trade and Manufacturing are off their highs, but are roughly in line with where they were in the Spring of 2021. The same is true of Business Services and Leisure Services, though they’re hiring at a faster rate. The continued hiring in retail seems particularly incongruous with recent data on building inventories and stories of disappointing sales.

Normally GDP and employment move up and down together, but they don’t have to. Less output with more input would mark a dramatic decline in productivity. As former CEA chair Jason Furman writes, though, we have never seen a disconnect this large between the two indicators in data dating back to 1948.

Either one set of indicators is awry, or something strange, unprecedented and unfortunate is happening with productivity.

Flexport research reports in the past week include a review of the comparative performance of U.S. east and west coast ports, including the time taken to ship from Asia to each coast. We’ve also published a write-up of our recent “State of Global Trade - Bullwhips vs. Full Ships” webinar where we investigate the evidence for a downturn in global trade activity.

EU retail sales excluding autos were unchanged in May versus April on a seasonally adjusted, real (i.e. inflation adjusted) basis. That followed a 1.3% drop in April and leaves sales just 0.5% higher than a year earlier. E-commerce sales remained stable but are now down by 10% year over year after six sequential declines on that basis.

Euro Area Producer Price Inflation (PPI) increased by just 0.7% in May vs. April, the slowest sequential increase since February 2021 but nonetheless marking the 24th straight month of increases. Energy prices dipped for a second month by 0.2%. Durables and nondurables increased by 0.9% and 1.3% respectively, both were slower rates than a month earlier.

Total U.S. international trade activity (exports plus imports of both goods and services) improved by 0.8% sequentially in May, reversing a 0.6% dip in April. The reversal was driven by a stabilization in goods imports which were up by 0.1% after declining by 4.4% a month earlier. Services imports also climbed by 3.2% and are now 16.2% above 2019 levels on the back of a 12.4% sequential rise in travel services.

The U.S. Federal Reserve in its June meeting minutes has indicated upside risk to its inflation forecast in part due to the war in Ukraine being a “possible source of even greater upward pressure” on commodity prices. The war and COVID-19 related factory closures in Asia increase “the risk that supply chain disruptions … would be further exacerbated in the U.S.”

The South Korean government promised to provide an additional $30B of export support above previous plans, or a 15% rise, for 2022 led by trade financing provisions. As flagged in last week’s Weekly Economic Report, South Korea’s exports rose by 5% in June, the slowest rate since October 2020.

Russia’s Trade and Industry Ministry has reportedly stated the parallel import “mechanism is working”. It effectively allows Russian firms to buy products from companies that no longer supply into Russia via third countries. Direct imports from the U.S. and the EU have dropped markedly since sanctions were applied in the wake of the Ukraine conflict.

The U.S. has agreed to lift Section 201 “safeguarding” tariffs on imports of solar power equipment from Canada. The Biden administration has previously left Trump administration tariffs on solar equipment, metals and other products in place. It’s worth noting though this removal follows a court ruling against the tariffs earlier this year.

There are modest signs of a decline in pressure on semiconductor availability. Average pricing for memory chips reportedly fell by 11% year over year in Q2’22. Delivery times meanwhile for a wide range of semiconductors stabilized at 27 weeks for the past three months. That’s still well above the pre-pandemic level of 12-15 weeks.

U.S. Class 8 truck orders inched higher to 15,000 vehicles in June 2022 from 13,300 in May. That still left orders 44% lower than the same month a year earlier. Orders for the big rigs are driven in part by freight trucking market conditions and in aggregate had their worst quarter in Q2’22 since the pandemic-afflicted Q2’20.

The U.S. Trade Representative’s review of the impact of USMCA on autos includes a statement that it will “continue to assess whether the auto rules (in USMCA) are effective and relevant in light of future technology” including the shift to electric vehicles and the roll-out of autonomous vehicle technologies.

U.K. new car registrations meanwhile dropped to 24% year over year in June to 141k vehicles. While that was 18% better than in March that follows historic seasonality patterns. Manufacturing meanwhile was 13% lower than a year earlier with continued parts shortages cited as a driver of the continued shortfall.

Global airfreight handling fell by 8.3% year over year in May and was 2.0% below May 2019’s level according to IATA data. That marked the third straight decline on both measures. Capacity improved by 2.7% year over year but is still 8.4% below 2019’s level.

Chart of the Week - Refilling the Lot 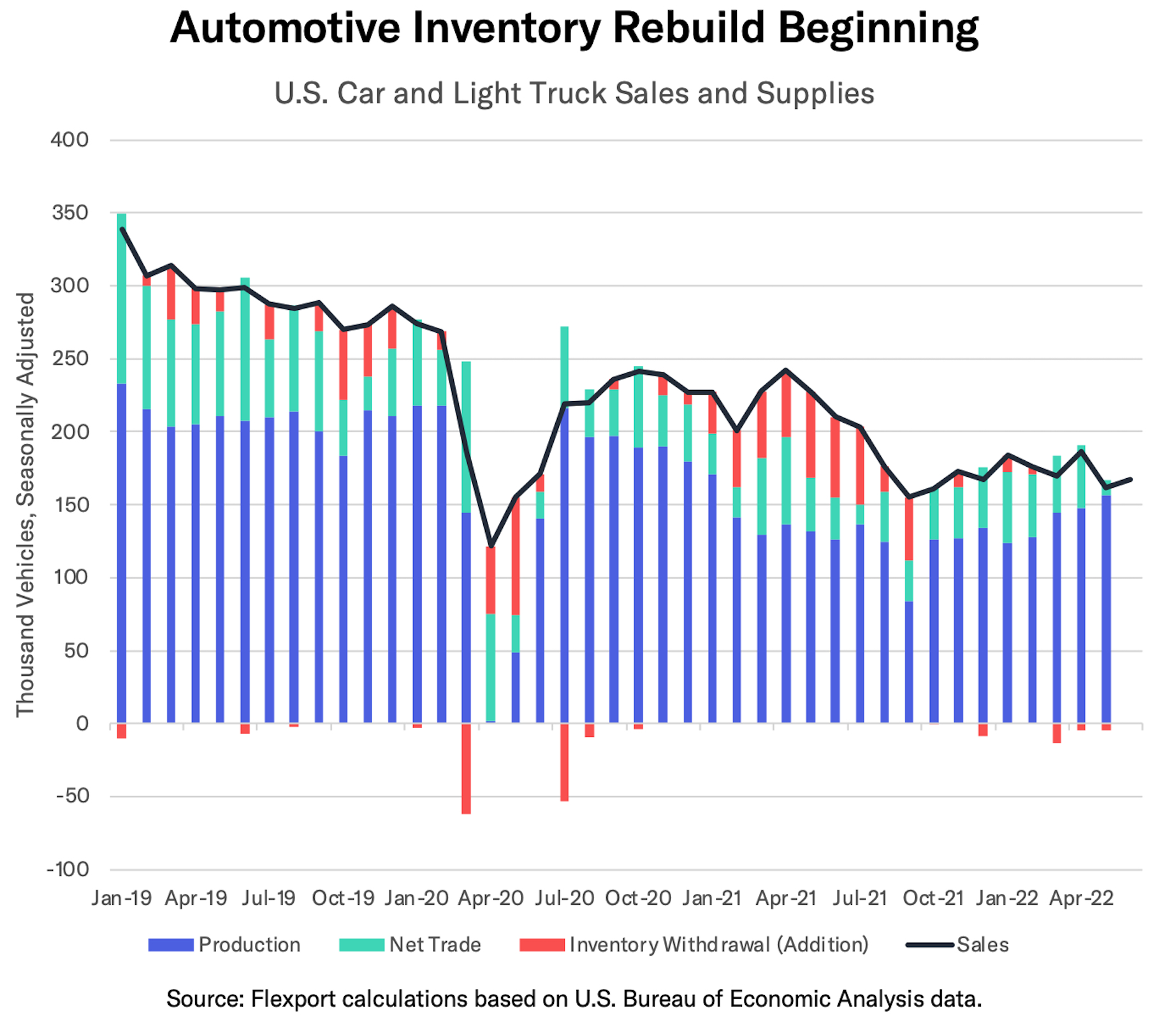 U.S. auto sales increased by 2.0% sequentially in June versus May but remained 16% below June 21 and 25% below June 2019 levels. A shortage of parts availability has been well chronicled and continues even now (see below).

Production has nonetheless picked up, rising by 6% sequentially and by 19% year-over-year in May (the latest data). The chart above shows how sales (black line) combines with U.S. manufacturing (blue bar) and net international trade (green bar) to drive changes in inventories (red bar).

While that may suggest the industry’s supply chain woes are abating, the inventory-to-sales ratio still stands at just 0.53x, up from the February trough of 0.37x but well below the 2019 average of 2.1x.