While May personal income and outlays figures showed drops in both real disposable income and personal consumption expenditures, we’ve largely seen a stabilization in these figures in recent months. The significant drops were from post-recession spikes and the current levels of consumption are all up from where we were pre-Covid. 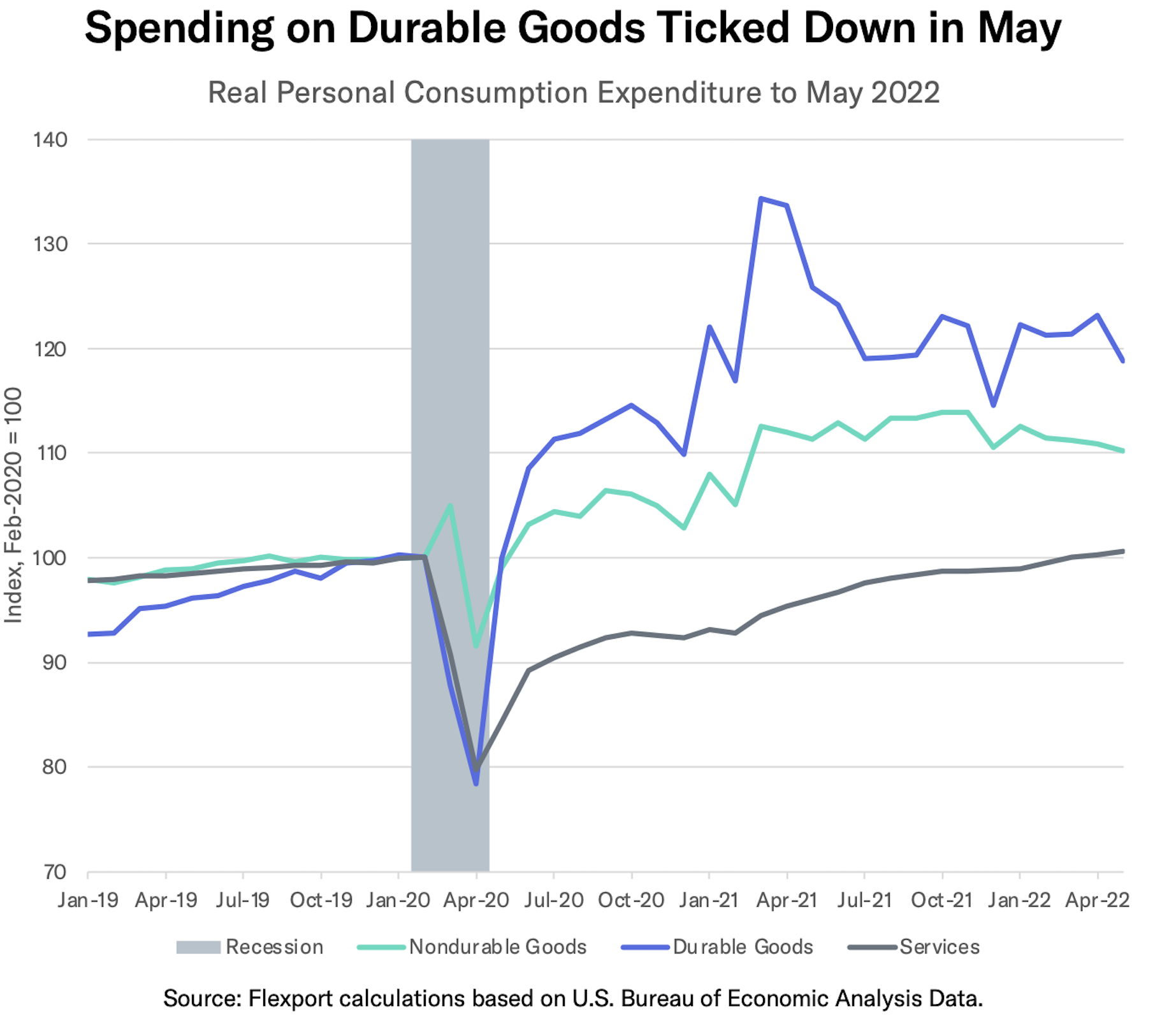 The chart above shows the main components of PCE, adjusted for inflation, over the last several years and normalizes them so that they equal 100 for February 2020, on the eve of the pandemic recession. This lets us put this month’s numbers in perspective.

We see that only services behaved the way we usually expect consumption to perform in the wake of a recession. Consumption of services: fell by about 20% with the onset of recession; then rebounded by about 10%; and then gradually recovered over the next two years, to the point where it has only recently exceeded its February 2020 level.

Since then, durables consumption has backed off, while nondurables have held fairly constant. The rate of durables consumption, however, is still almost 20% above where it was pre-pandemic. Thus, while there are concerns about a downturn in the U.S. economy, neither the data on personal income nor on personal consumption expenditures have yet shown a serious persistent dropoff.

An additional interesting feature of the chart concerns whether broader consumption patterns are returning to normal. The normalization above belies the relative size of the different sectors. Pre-Covid, services accounted for almost two-thirds of PCE, with nondurables consumption almost twice that of durables, and those ratios held fairly steady. A striking characteristic of the Covid economy has been the sharp tilt towards goods, as shown in the chart. From 2019 to 2021, in real terms, the goods share of personal consumption jumped from 36.0% to 40.7%.

Flexport research reports in the past week include the launch of our new European Logistics Pressure Matrix, which brings together eight key data points on consumer and industrial demand for logistics services as well as metrics for the level and timeliness of operations in European supply chains. Separately we showed how the fireworks industry provides clear lessons on the evolution of supply chains in the past three years.

Key U.S. inflation data came with the May Personal Income and Outlays report. PCE inflation was up 6.3% over the last 12 months, even with the April figure and down slightly from the March peak of 6.6%.

EU consumer confidence fell for a ninth straight month in June to reach the lowest since the pandemic (-24.0 vs. a long term average of -10.5 and an April 2020 record of -24.7) and the second worst on record. Elevated inflation – 8.6% in June – and the conflict in Ukraine are major drivers of the deterioration as outlined in our new EU Logistics Pressure Matrix.

U.S. merchandise trade activity increased by 0.4% in May versus April (census basis, seasonally adjusted), with imports dipping for a second month by 0.1%. The decline in the latter was led by a 2.4% slip in consumer goods imports which are now 10% below their March peak but still 35% ahead of the same month in 2022.

South Korea’s exports increased by just 5.4% year over year in June. That was the slowest rate since October 2020 and was slightly slower than expected. Yet, on a days-adjusted basis growth was 15.0%.

The Biden administration has started trade discussions with Taiwan covering trade facilitation, digital trade, labor and environmental standards among others. That comes against the backdrop of the administration’s Indo-Pacific Economic Framework which Taiwan is not a part of.

The EU and New Zealand have signed a free trade agreement which the EU sees as increasing trade by 30% and outward investment flows by 80%.

The U.K. government has extended steel “safeguarding” tariffs which were due to lapse this week until mid-2024. The government recognizes that is a breach of WTO rules and will consult with other members.

Two developers of new semiconductor manufacturing plants in the U.S. have stated their investments are contingent on yet-to-be passed legislation for financial support.

U.S. durable goods orders improved by 0.7% sequentially in May versus a market expectation of 0.1%. A surge in defense equipment orders, which increased by 2.6% likely due to support for the conflict in Ukraine, was the main driver though orders for primary metals, industrial machinery and communications equipment also did better than average.

U.S. merchant wholesalers’ inventories increased by 2.0% sequentially in May, equivalent to a 25.0% year-over-year rise after a 24.0% rise in April. The rapid rise in inventories is leading to changing business practices including increased use of inventory liquidation service providers and “throw away” returns policies.

The relaxation of COVID-19 related lockdowns in China have resulted in a rebound in manufacturing sentiment with new order expectations in the Caixin survey returning to positive territory of 50.2 (above 50 indicates expansion) vs. 49.6 in May. Export expectations reached their highest since April 2021, while imports reached the best since July 2021.

The OPEC+ group has left its plans to modestly increase oil output in August unchanged and have yet to outline longer term plans. That may be a moot point given the group failed to meet its own targets in May.

The U.S. will extend its sanctions against Russian trade by increasing tariffs on $2.3B of annual imports from Russia to 35% including a wide range of chemicals, lumber, steel, apparel, industrial machinery and autos. That follows extensive restrictions on U.S. exports of energy and mining equipment.

Chart of the Week - Lockdowns and Earthquakes 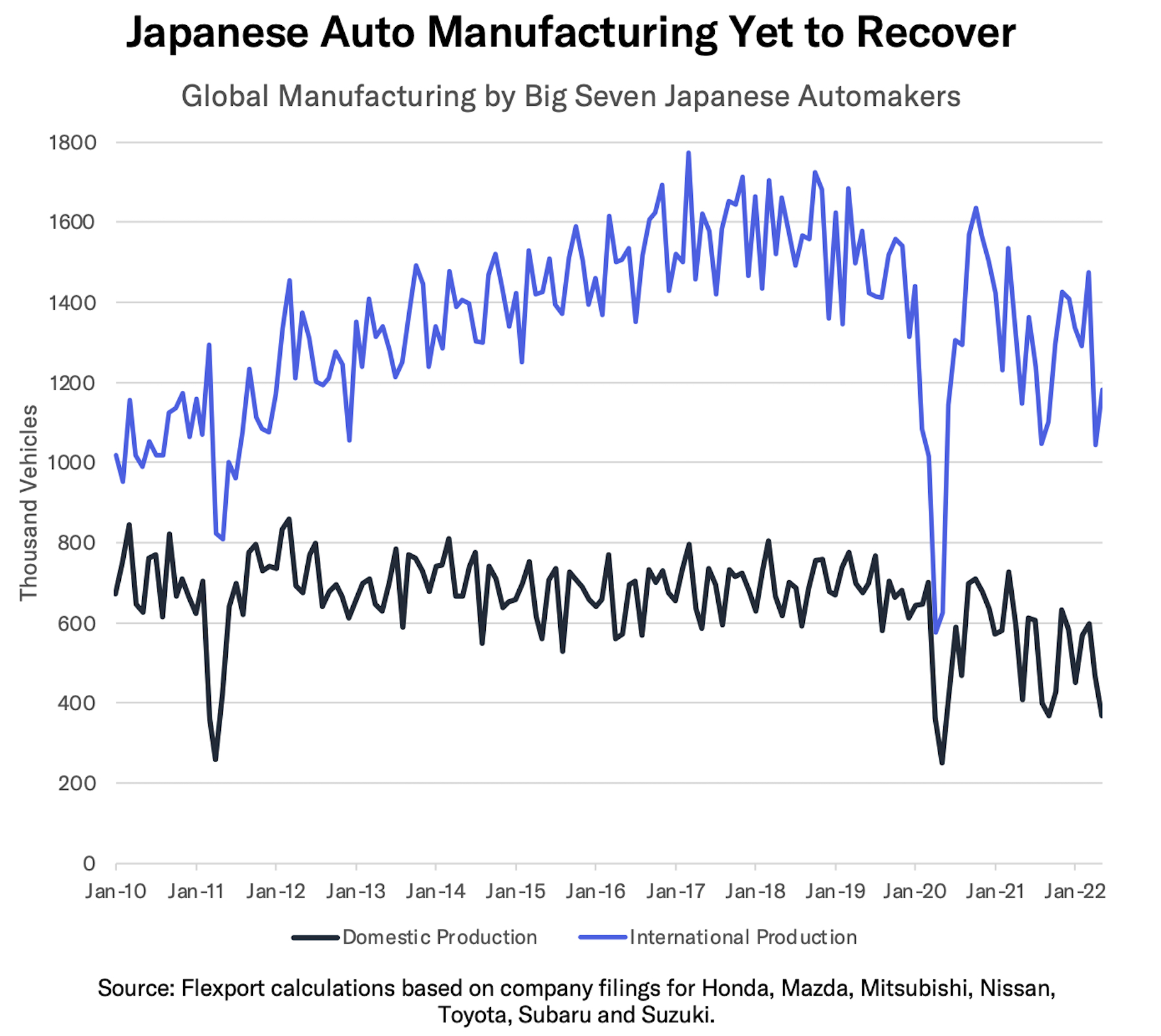 Japan’s big seven automakers have struggled to improve production in the wake of the pandemic and systemic, persistent shortages of semiconductors. The latest data shows the global production for May improved by 2% sequentially and by 2% versus a year earlier, Yet, output is still 31% below the same period of 2019.

Production in Japan, shown in the chart above, has done even worse with 367,518 vehicles being the fifth worst month since 2009. Prior dips included the pandemic-lockdowns in April and May 2020 and the Tōhoku earthquake in 2011.