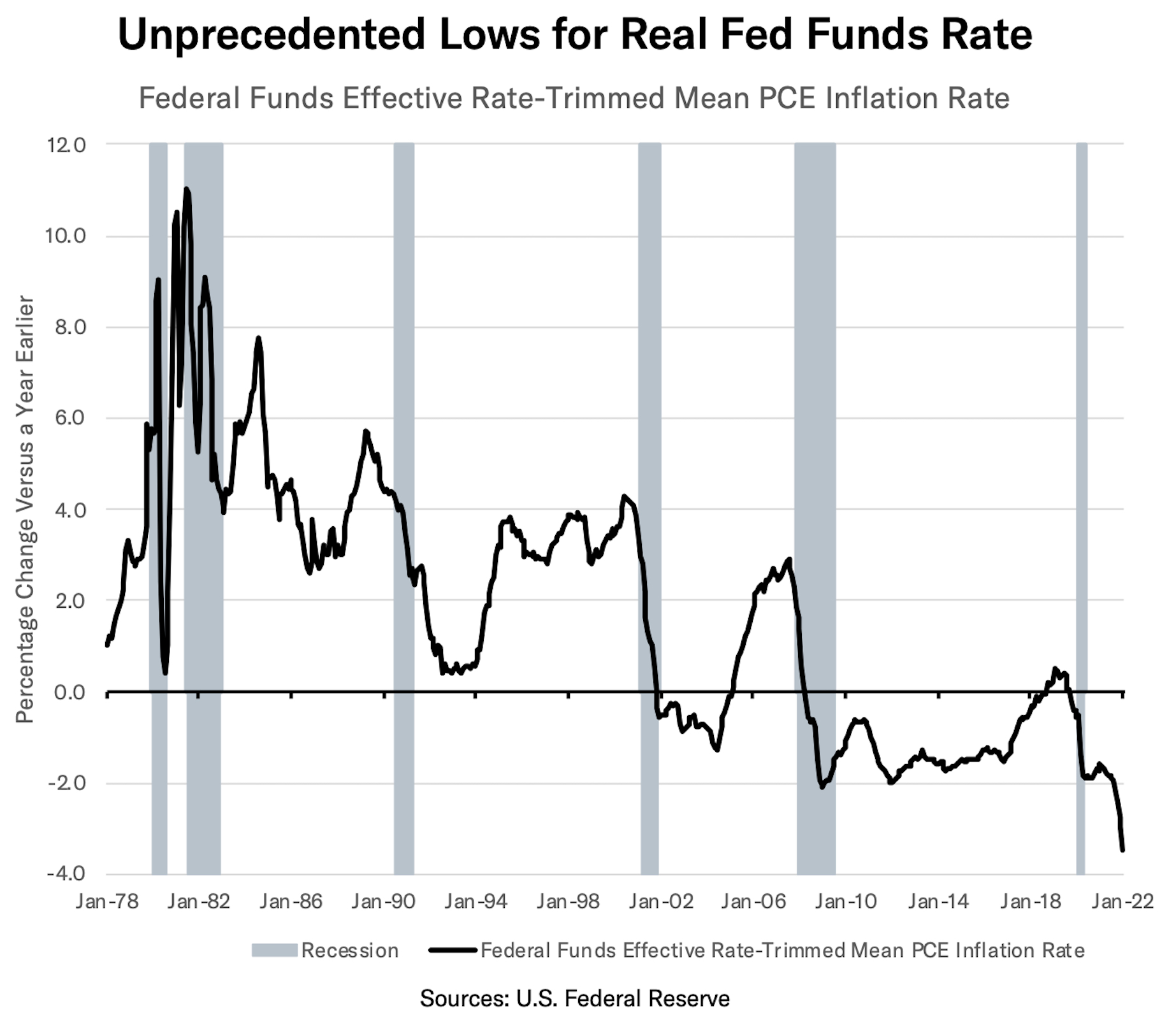 This past week, the U.S. Federal Reserve moved the Federal Funds rate – its key policy interest rate – up for the first time since late 2018. The rate had reached a recent peak then at 2.5%. It subsequently began a gradual descent in July of 2019 that became precipitous with the Covid-19 pandemic shock in early 2020. The Fed Funds rate bottomed out at zero in March of 2020 and has not budged since.

If you noticed that neither the numbers in the paragraph above nor the flat stretches it described seem to match the graph, you’re right. The Fed sets this rate in nominal terms. But for economic impact, one ought to look at the real rate, which subtracts off inflation. Whereas the nominal rate is easy to see, there are a number of ways one could arrive at a real rate, depending on whether one subtracts off actual or expected inflation rates and which measure one chooses.

In the graph above, we have the Fed’s preferred measure of inflation, the Trimmed Mean PCE rate put out by the Dallas Fed. Recently, this has tended to be one of the lowest measures of inflation (currently 3.5% for 12 months), trailing well behind a measure such as the Consumer Price Index (currently 7.9% for 12 months).

As a very rough rule of thumb, one might think of a 0-1 percent positive real rate as neutral. Negative real rates can certainly be thought of as stimulative. A negative real interest rate means that if you borrow money, buy something that increases in value at the rate of inflation, and then sell it to repay the loan, you’ll have money left over at the end. You’re being paid to borrow money.

Turning back to the graph, we see that recent Fed policy has been extraordinarily and increasingly stimulative. With nominal rates held fixed and inflation rising, the real Fed Funds rate dropped below prior lows – and then kept on dropping.

The new policy from this past week is for a 25 basis point increase in the nominal rate (0.25 percentage points), with an expectation that there will be multiple subsequent increases through the calendar year. The Fed’s latest median projection is that the Fed Funds rate will rise to 1.9% by the end of 2022. So how much will that put a brake on the economy and mounting inflation?

The answer depends entirely on what you think is driving inflation and the trajectory it will follow. If you believe that inflation has been caused by problems in the supply chain that will soon right themselves, leaving inflation to recede on its own, then you may forecast that inflation will drop to 2.6% in 2023 and the nominal Fed Funds rate will continue climbing to a modest 2.8%. Then you would have a slightly positive real Fed Funds rate next year. This is, in fact, the Fed’s median projection.

If, however, you believe that federal infusions of cash, easy money (chart), and now rising wages are all pushing up demand and driving inflation ever higher, then you will not be impressed with this week’s move.

Fed policy may fall increasingly behind inflation and the real Fed Funds rate could become even more negative than it is now. In that case, this week’s rate hike will be the first of many to follow.

In the latest Flexport Post-Covid Indicator, consumer preferences for both durable and nondurable goods versus services are expected to hold near summer 2020 levels through April 2022. We’ve also updated our Trade Activity Forecast and expect U.S. imports to maintain their current high levels through Q2’22.

In other research we’ve taken a deep-dive into sanctions being applied against Russia in the energy sector, including the impact of higher oil prices on logistics fuel costs.

The Federal Reserve wasn’t the only central bank on the move last week. The Bank of England increased its base rate to 0.75% from 0.5%. The Bank expects U.K. inflation to peak at 7.25% in April and return to 2% over the next two years. It also cited the Ukraine conflict’s impact on commodity prices as an upside risk to its inflation forecast.

Core consumer price inflation in the Euro area increased to 2.7% year over year in February from 2.3% in January, marking the fastest rate of expansion on that basis since 1997.

U.S. producer price inflation for goods accelerated to 2.4% sequentially on a seasonally adjusted basis, reaching 14.4% on an annual basis. That was slightly offset by slower inflation in the price of services, leaving total PPI on an annual basis at 10.0%, inline with January.

U.S. import prices increased by 1.4% sequentially in February and by 10.9% year over year. The latter marked an increase from 10.7%. Rising fuel prices played a part - excluding food and fuels, annual inflation climbed to 6.5% from 6.2% a month earlier. Rising oil prices in response to the Ukraine conflict may push prices higher.

Industrial production in the U.S. increased by 0.5% sequentially in February and by 7.5% compared to a year earlier. Capacity utilization - a measure of how hard factories are working - increased to 77.6% but remains well below the historic average of 79.5%.

China’s international trade activity increased by 15.9% year over year in January and February combined (separate data is not published due to the variation in the lunar new year’s timing). That included a 16.3% rise in exports, which in turn was driven in dollar terms by a 27.3% rise in semiconductor exports, a 104% rise in automotive products and a 34.3% jump in steel exports.

The members of the G7 have agreed in principle to remove Most-Favored Nation privileges from Russia under World Trade Organization in connection to the Ukraine conflict. That may open the door to increased tariffs at quotas at a later stage. The U.S. House of Representatives passed enabling legislation, though Senate and Presidential approval is still required.

The European Council (heads of state) has reached a broad agreement on the structure for the Carbon Border Adjustment Mechanism (CBAM). That will take the form of an import levy, initially on steel, aluminum, fertilizers, electricity and cement, on shipments from countries with weaker carbon pricing. Negotiations over the CBAM have been ongoing since July 2021.

The U.S. and U.K. are holding talks from March 21 to “advance mutual international trade priorities.” Details of what will be discussed have yet to be released, though steel-related tariffs may be on the agenda. Passing a full trade deal will prove complex given the Biden administration does not have Trade Promotion Authority (aka fast-track) available at present.

In the aerospace sector, one of the major airframe makers is cutting its purchases of Russian titanium. Supplies of Chinese aerospace components and European plane tires are also in doubt. Air transportation routes remain disrupted.

The technology sector faces the dual disruptions of reduced exports of semiconductors and manufacturing equipment to Russia as well as risks to the availability of raw materials. The latter is being realized in a halving of Ukrainian exports of neon.

Challenges for the automotive sector in terms of raw material and component availability - including wiring harnesses in one example - are also beginning to bite.

The food industry also faces significant challenges to supplies of cereals as well as fertilizer. The Indian government is seeking to alleviate the risks by diversifying its fertilizer sourcing to include Canada and Israel. 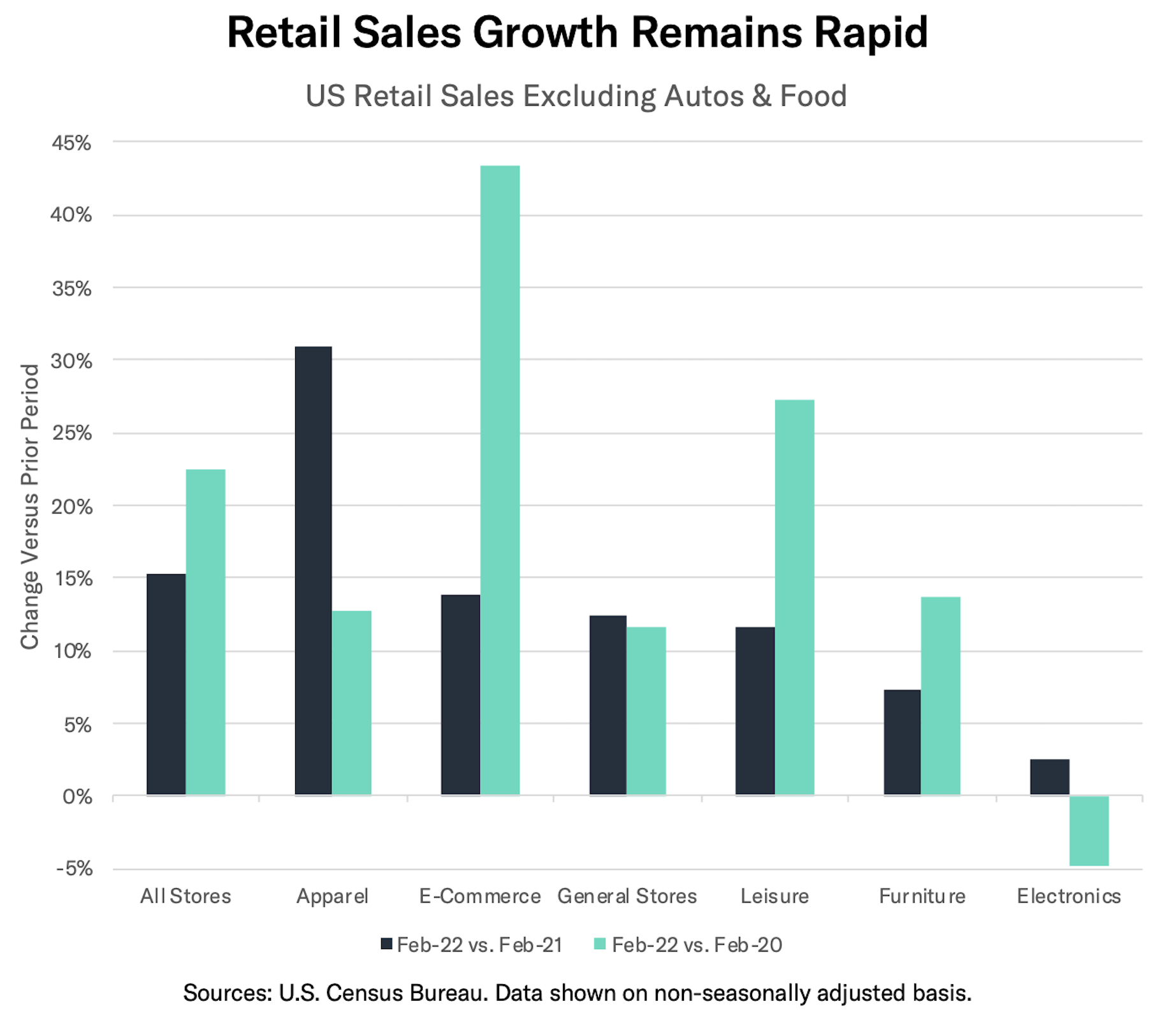 U.S. retail sales remained near record highs in February, with sales including autos unchanged versus January on a seasonally adjusted basis at $584B. Excluding autos and food, sales rose by 15.4% year over year in February, led by apparel which rose by 31.0%.

Laggards included furniture and electronics which rose by just 7.4% and 2.6% respectively. While the dollar value of sales growth remains rapid and suggestive of pressure on logistics networks, it should be noted that inflation is playing a substantial role.