9 Things to Know from FORWARD 19

Two weeks ago, we hosted FORWARD 19 by Flexport, Flexport’s first customer conference. The event, which drew more than 300 people to Santa Monica, kicked off with a keynote from General Stan McChrystal, concluded with Shaquille O’Neal in conversation with Flexport Founder and CEO Ryan Petersen, and was jam-packed in between with education and actionable solutions from renowned experts on some of today’s most pressing logistics and supply chain challenges. But, no need for FOMO – read on to enjoy some of the most dynamic takeaways from the event.

1. Uncertainty Looms on Tariffs and the Economy

The outlook for ongoing tariffs and the global economy was perhaps best summed up by Flexport Chief Economist Phil Levy when he observed that there is pervasive “uncertainty about the uncertainty.” At the same time, while noting that recessions are notoriously difficult to predict, Levy observed several indicators of rough waters ahead: “When you look at the economics right now, things don’t look bad. But on the other hand, the U.S. Fed and Central Bank are looking like they’ve seen a ghost. Recent rate cuts are not normal.”

So, how are shippers mitigating the tariffs? Relocating manufacturing from China was one strategy discussed in Levy’s panel alongside Ulrik Sanders of Boston Consulting Group and Karena Parliment, CFO of Kenroy Home. Another solution was requesting an exclusion; as noted by Dr. Levy, by the end of July, nearly 14,000 exclusion requests had been granted. Another strategy discussed was conducting a full SKU analysis to see where tariff increases could be justifiably passed through to retailers. 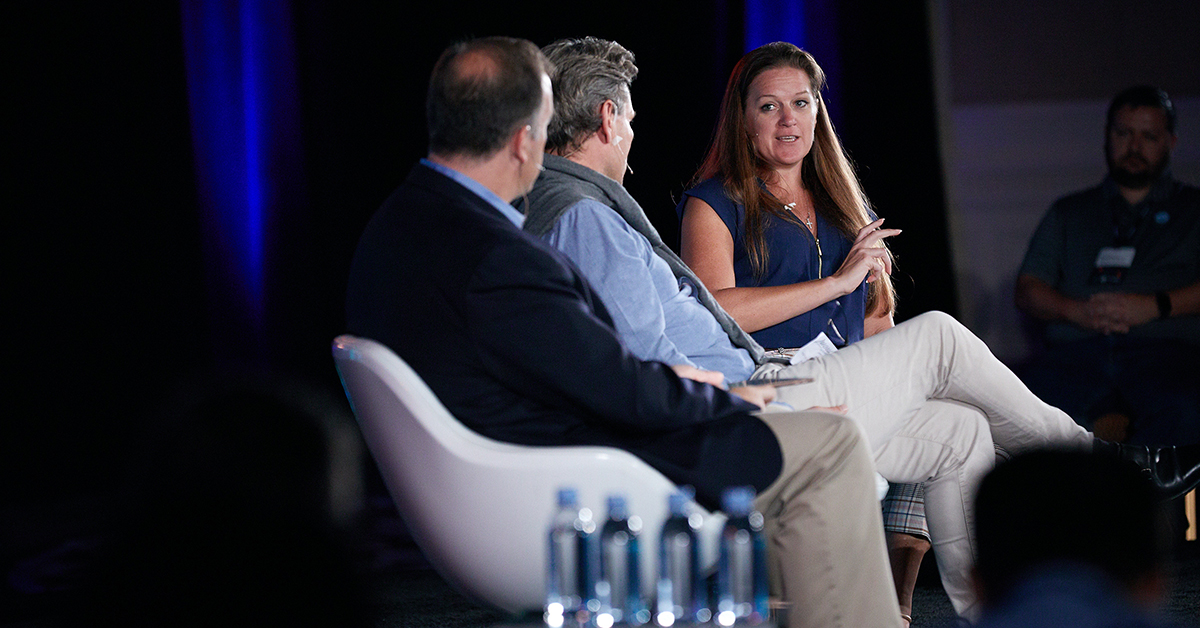 The tariffs represent a clear risk to businesses and their supply chains, as continuous change and growing complexity raise the risk of costly penalties. According to Flexport’s Tom Gould, “We’ve seen more changes in tariff codes over the course of the last 18 months than in almost the past ten years combined.” As a result, Gould shared that there was a 49% increase in penalties issued by United States Customs and Border Protection (CBP) between 2017 and 2018, and we expect to see even more increases in 2019.

That said, Gould noted that chaos brings both risk and opportunity. In terms of customs, the trade war has afforded organizations with the impetus to more closely scrutinize their supply chains and their duties with their freight partners for greater accuracy and efficiencies. In fact, Gould shared that during this same 18-month period of increased penalties, customs exams for Flexport shipments have decreased by 72% due to the data integrity enabled by our technology. 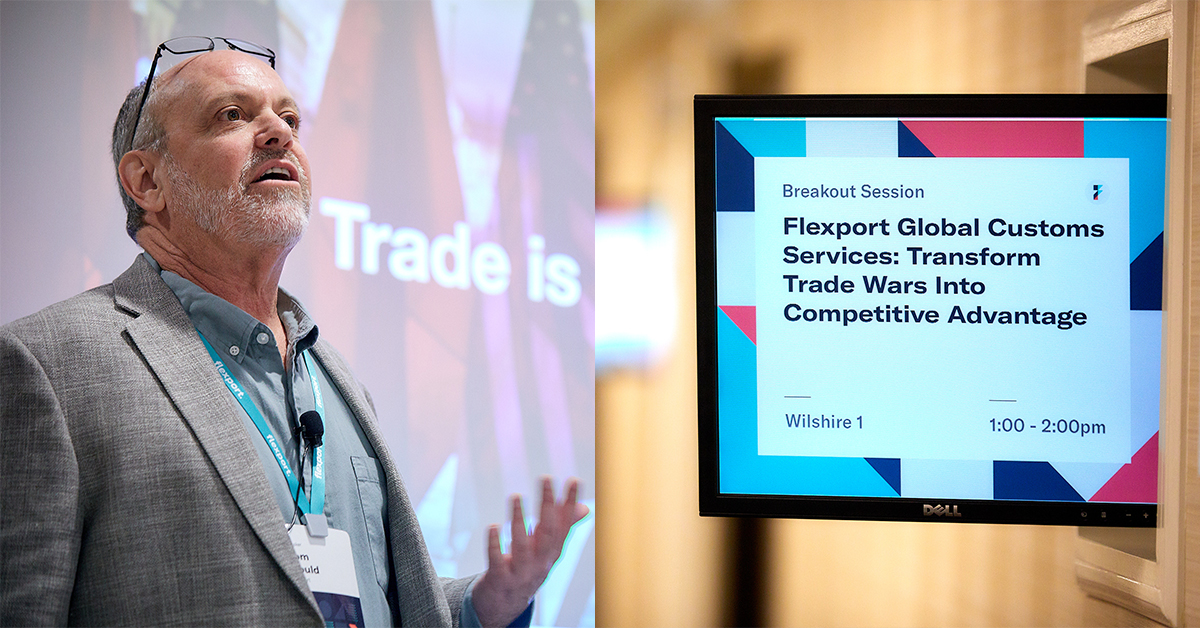 Another hot topic for attendees, IMO 2020 is set to shake the freight marketplace. From fuel costs to higher charges to secure capacity, many carriers can expect costs to increase up to 25%, some of which will be passed down to shippers.

Though announced in 2016, we’re roughly 100 days from implementation and the big questions still remain as to how the regulatory rollout with affect the market.

For Refiners: Will the investment in cokers (oil refinery processing units) be worth it, given the uncertainty of long-term demand for oil? For Carriers: Should they invest in scrubbers that remove pollutants from the ship’s fuel before it’s released into the environment? Or invest in compliant fuel? For Governments: As compliance and regulations evolve, will countries decide not to comply? 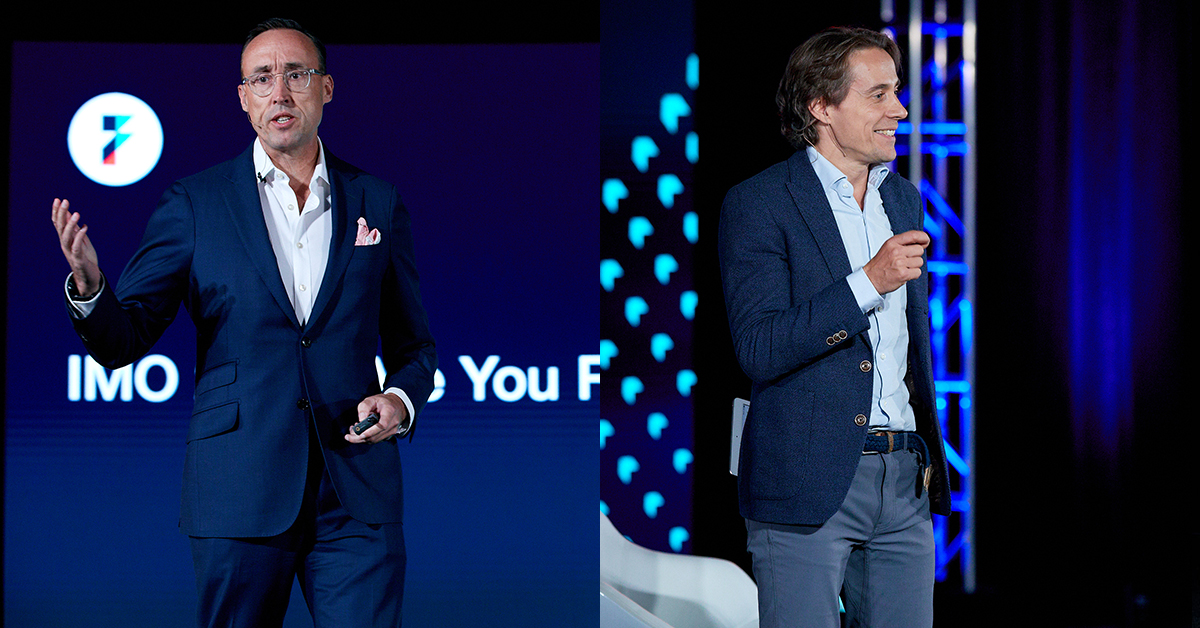 4. Insurance is More Essential Than Ever

While tariffs and IMO 2020 present macro risks to the supply chain, another key area of focus at FORWARD was protecting inventory in transit. And for good reason: in Q1 2019, there were on average of ​2 cargo ship accidents per day. That said, based on Flexport data on claims for our insurance program from 2018-2019, most damage occurs en route, to and from port.

What does this mean for shippers? Tina Summers, Flexport’s Head of Insurance, and Marsh underwriter Matthew Yeshin suggested that businesses need to broaden their view of insurance to include all steps in the journey. Businesses may be surprised to know that the cost to insure only the ocean leg of transit can be almost as much as insuring everything from end to end. At the same time, the pair noted that automation in port opens up supply chains to cyber attacks; most insurance policies don’t cover this, and most people don’t even think to insure for this. 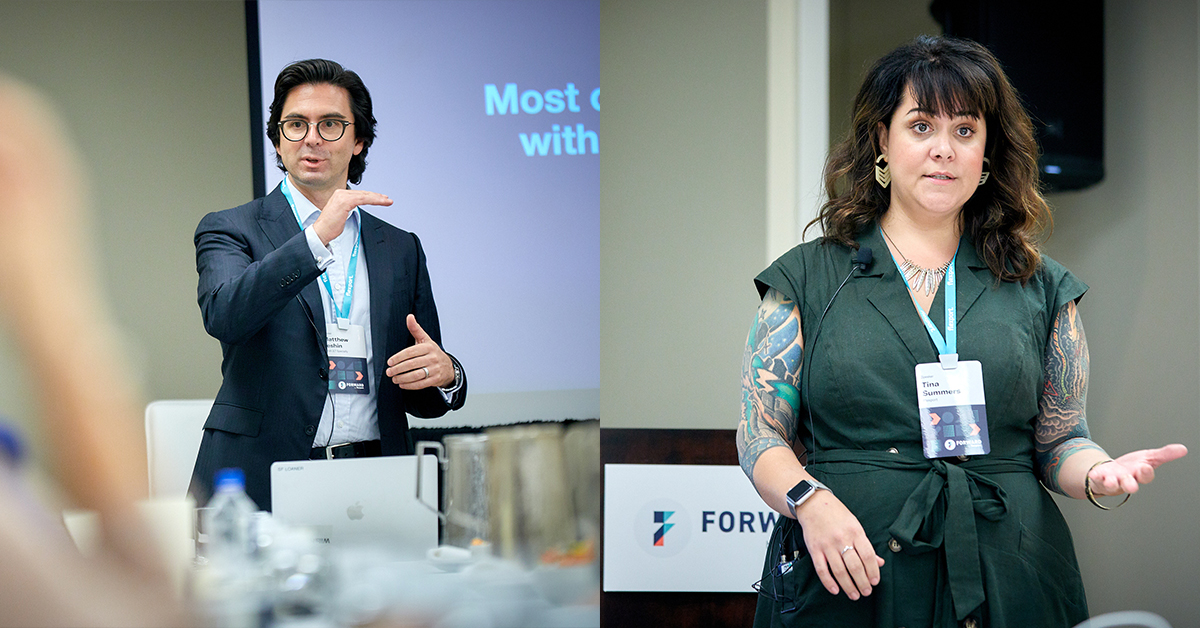 With so much uncertainty and volatility pervading the global trade landscape, FORWARD’s two featured keynote speakers brought valuable perspective and inspiration to attendees. Retired four-star general and “Team of Teams” author Stan McChrystal discussed the essentialness of collaboration and information sharing among teams as critical to success. “It’s constant hard work to align organizations to work together – it takes strong leaders that inspire change,” said McChrystal. “Most of us don’t seek chaos. Chaos seeks us. The winners in the future will be the people who can work through chaos.” 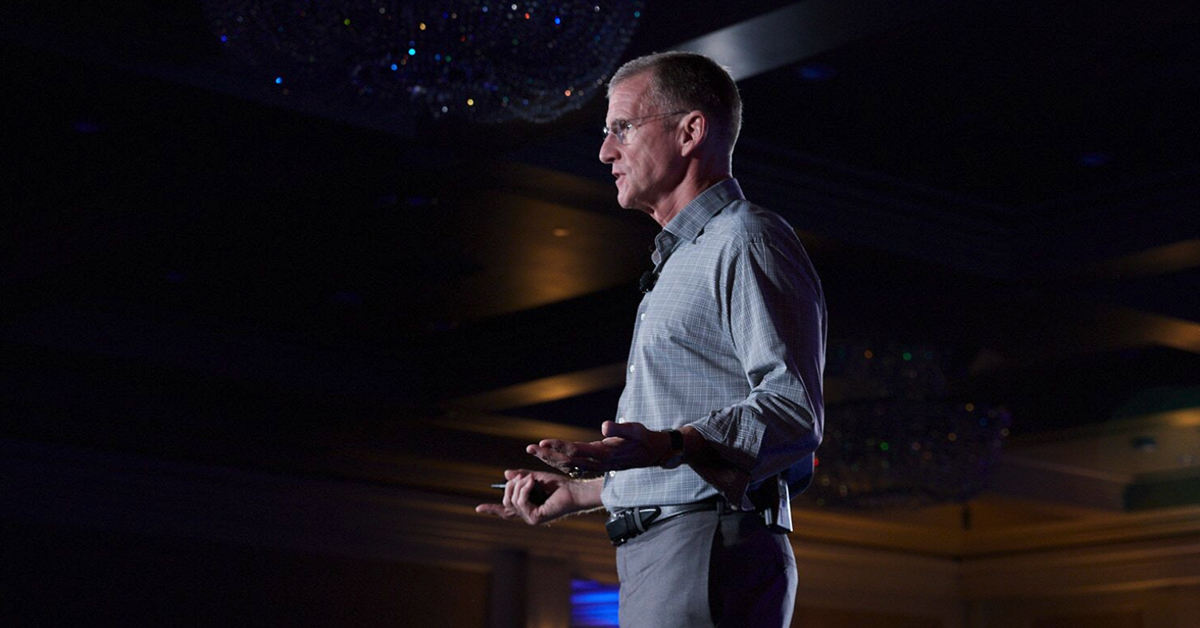 NBA Hall of Famer and entrepreneur Shaquille O’Neal similarly emphasized the value of teams over the role of any individual leader. “The team is the star,” Shaq stated. “As leaders we have a tough job: to focus on the task and focus on your relationship with the team. Show compassion and trust. Delegate. Don’t micromanage. The main factor you need to be successful on a team is respect." 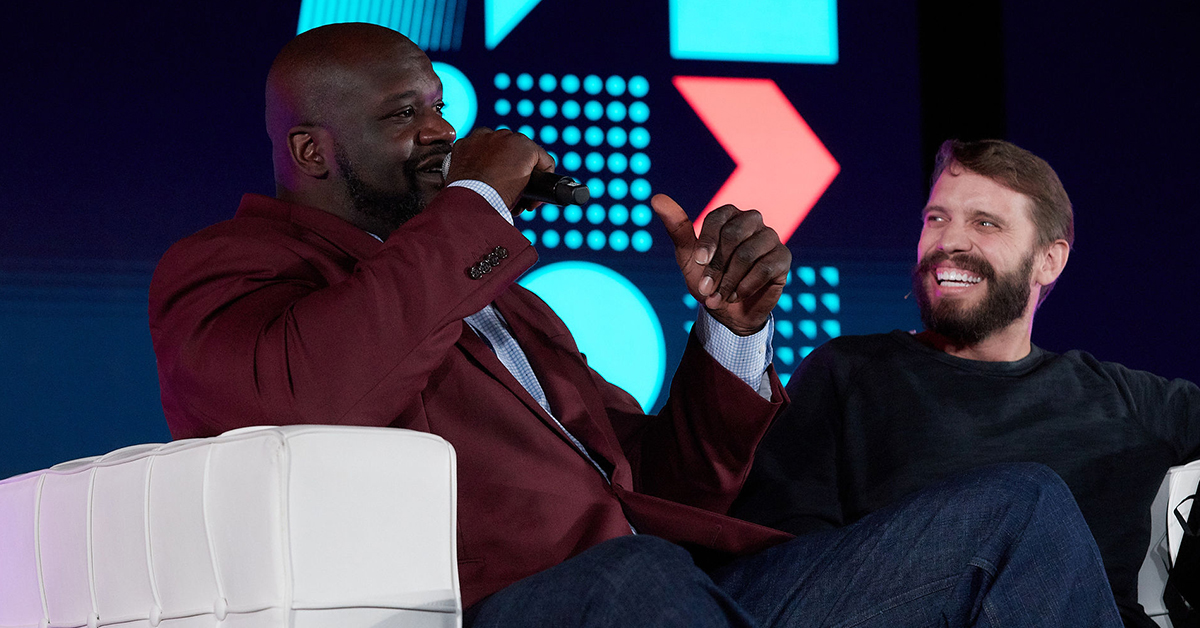 Also bringing inspiration was a closing-day panel addressing how businesses are tackling some of the foremost environmental and humanitarian concerns of our day and gaining traction against competitors in the process. Flexport CEO Ryan Petersen shared that, according to Stanford University’s Center on Philanthropy and Civil Society, more than 90% of CEOs state that sustainability is important to their company’s success – and how responsibility offers a powerful brand differentiator and competitive advantage.

Ryan then led a powerful discussion of real-world social impact with panelists Stephan Jacob, COO/Co-Founder, Cotopaxi; Eric Talbert, Western Regional Director, MedShare; and Susy Schöneberg, Head of Flexport.org. Cotopaxi’s Jacob talked in depth about how his company has built responsibility into its business model – and how they’ve partnered with Flexport.org to advance their mission through their supply chain. Flexport.org’s Schöneberg also announced the Flexport.org Fund to aid NGOs and nonprofits with delivering humanitarian aid shipments; read more about the Flexport.org Fund here.

Another valuable takeaway: panelists suggested attendees learn more about available Duty Drawbacks as a tariff mitigation strategy; if you import goods that you end up not selling, and instead donate them internationally, you can file with U.S. Customs to get your duties back. 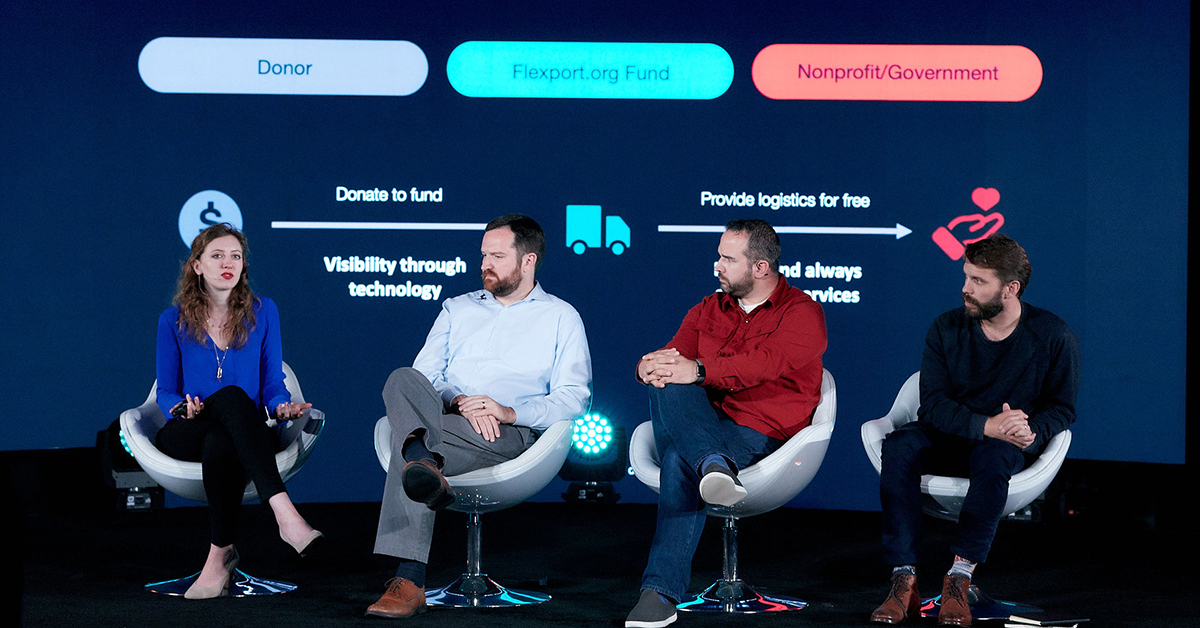 Flexport COO Sanne Manders and Maersk CIO/CTO Adam Banks discussed how data is driving business optimization and transformation in logistics. “Before you can transform an industry, you have to digitalize it. [Shippers] should put pressure on their organizations to invest in more technology so that we can all be more seamless,” said Banks. Manders agreed, suggesting, “To be more customer centric and efficient, we have to get rid of this human-to-human relay race and replace it with a machine-to-machine relay race. Data is the way to unlock this.”

Importantly, Manders and Banks also discussed the essentialness of partnership and transparency for transformation to truly take hold, securely sharing data and aligning incentives among customers, carriers, and forwarders. 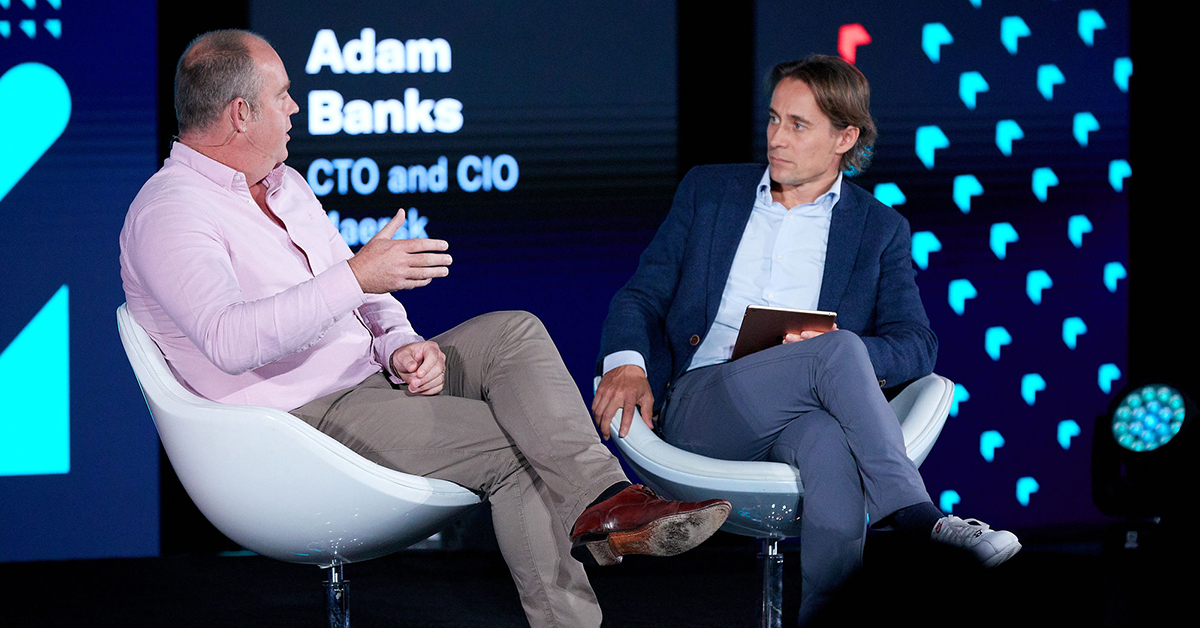 Ryan Petersen’s keynote presentation, titled “A New Business Model for Transformation: From Managing Logistics to Managing Business,” echoed Manners and Banks’ conversation. Ryan outlined the imperative for logistics to shift from a cost-center model to a growth-center model – one that’s based on how best to serve the consumer in all the ways they want to buy, and managed in even closer collaboration with businesses’ freight partners.

Ryan outlined how it also takes a shift in logistics – requiring an integration of technology, infrastructure, and expertise. ”Infrastructure is key. But you have to connect it to the real world [with technology],” he said. “Doing tech alone is just a thin veneer, because it doesn’t connect to the deeper infrastructure. And the problems of the industry can’t be solved with tech alone; it needs humans. Relationships are more important than ever.” 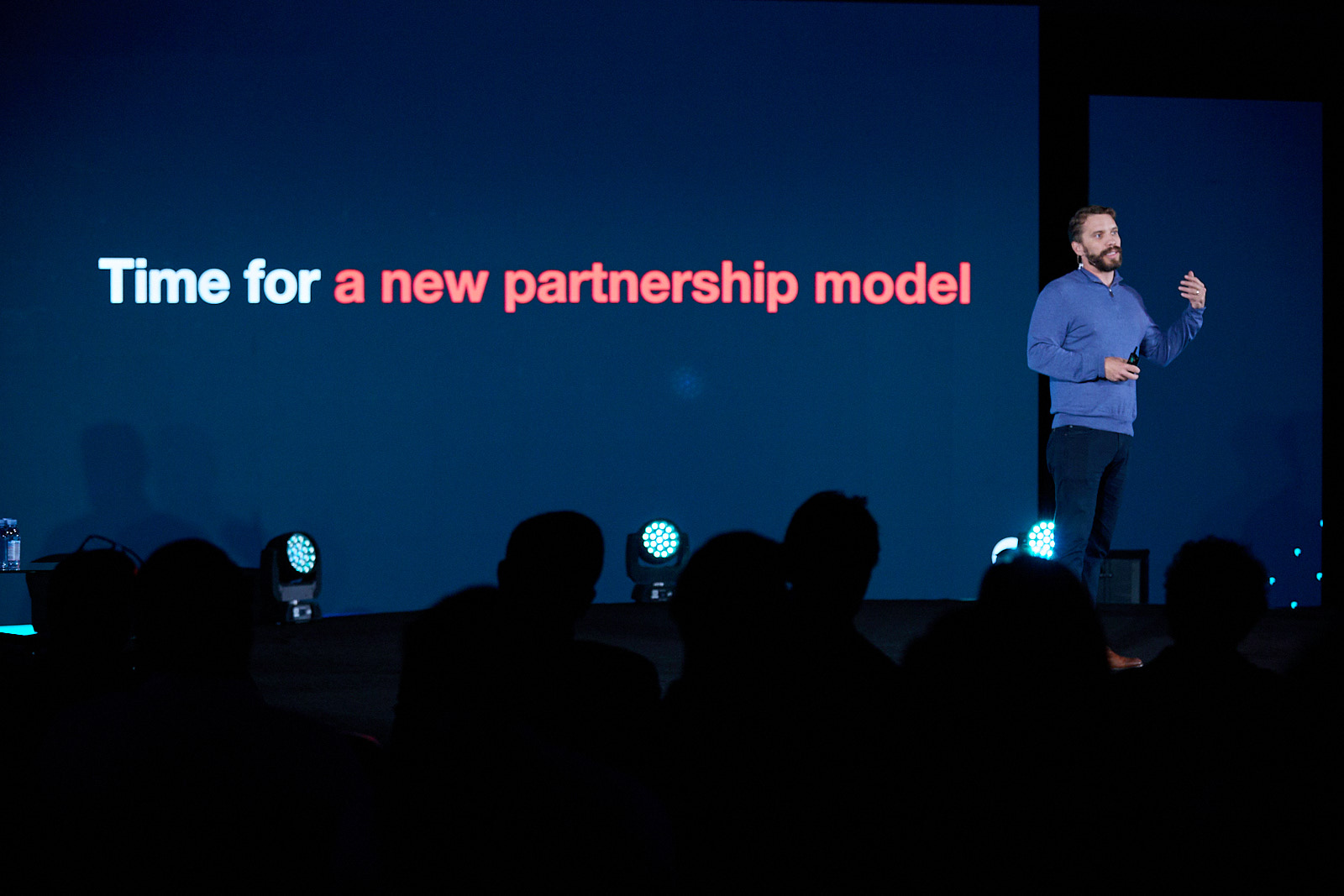 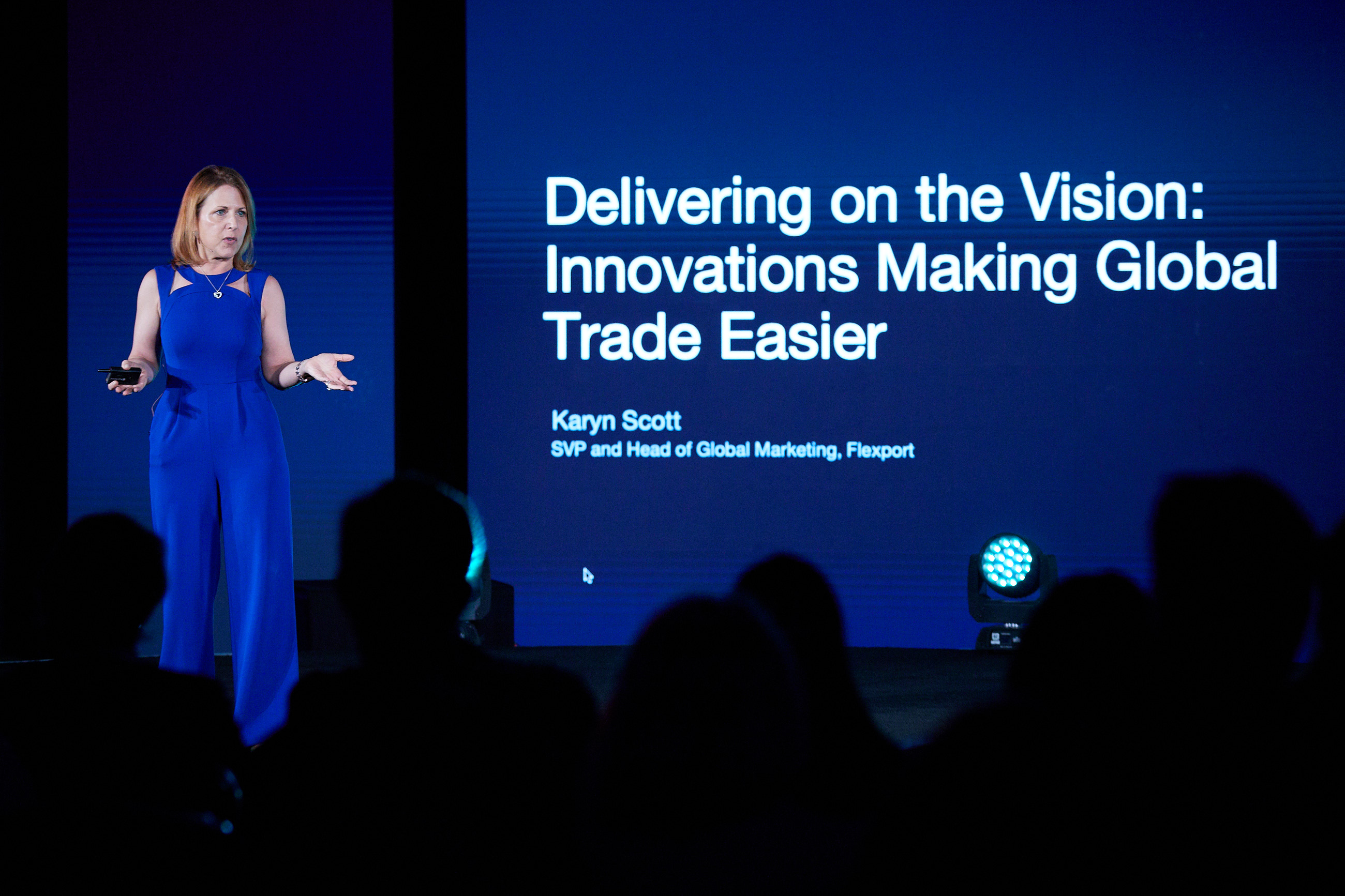 ShareTweetShare
About this author
Flexport
Follow on Twitter
Ocean vs Air: Diversification Matters More than Ever
As Containers Pile Up, So Do Port Fees. Here’s What You Can Do.