Flexport has obtained information that Amazon China has registered to operate as an ocean freight forwarder in the United States. The Federal Maritime Commission now lists Amazon China in its directory of licensed Ocean Transportation Intermediaries—the list of companies authorized to sell ocean freight services. 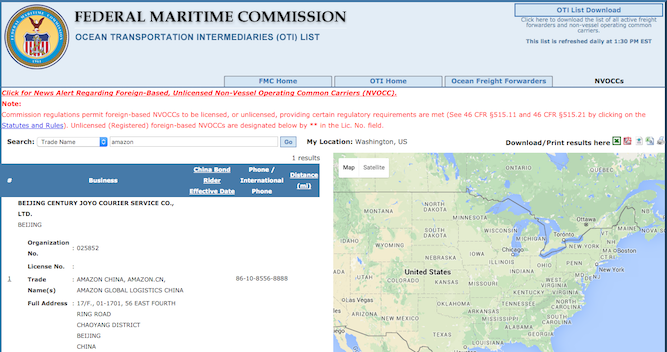 (To access this page, go to FMC’s directory of NVOCC licensees. On the search dropdown menu, scroll down to “Trade Name.” Then search “Amazon.” “1 Beijing Century JOYO Courier Service Co. Ltd” is the result. Click on it and you’ll find the trade name “Amazon China.”)

What does it mean for Amazon to register to provide ocean freight services?

Amazon China now has the appropriate paperwork to provide ocean freight services for other companies. This is Amazon’s first step toward entering the $350 billion ocean freight market.

This is a smart and long overdue move for the company. By offering ocean freight services, Fulfillment by Amazon (FBA) will make it easier for its customers to move goods into the company’s logistics network.

The official name on the FMC registry is Beijing Century JOYO Courier Service Co. Ltd, with the trade name “Amazon China” listed on its license. In 2004, CNET reported that Amazon bought JOYO, then one of China’s largest online retailers. A 2006 SEC filing reveals JOYO to be a “significant subsidiary” of Amazon.com Inc., and we see that it’s currently doing business as Amazon China.

Why does becoming an ocean freight forwarder make sense for Amazon China but not for Amazon itself?

Because Amazon’s ocean freight services will be far more attractive to Chinese sellers than to American buyers. Chinese suppliers would love direct access to Amazon’s vast American customer base. But the idea of buying ocean freight is far less appealing for U.S. companies selling on the Amazon Marketplace.

As the freight forwarder on a company’s shipments, Amazon would see both the name of the supplier and the wholesale price paid by the importer. For most of the more than 40,000 sellers currently earning over $1 million per year selling products on Amazon, this data is too sensitive to entrust with a company that is both a primary distribution channel and a ruthless competitor. It would be too easy for Amazon to use that data against them, either as an anchor in price negotiations, or worse, to purchase directly from the supplier, cutting the U.S. merchant out altogether.

On the other hand, Amazon China can provide freight forwarding services to Chinese companies looking to move products directly into FBA warehouses, or perhaps even by cross-docking the goods for direct injection into Amazon’s courier network. Sharing the invoice price and supplier name is a non-issue for Chinese companies selling to Amazon or directly to its customers.

We should note that the registration with the FMC is only the very first step that Amazon has taken to become an ocean freight forwarder. It’s laying the groundwork now; actual operations may not begin for a few years.

Here’s a reason for investors to be excited

This may be Amazon’s answer to Wish, the worldwide mobile commerce phenomenon. Wish is now the top ecommerce app in more than 30 countries. That’s an indication that Chinese merchants are eager to sell directly to global shippers, and that consumers are happy to wait for delivery if they can save money.

Wish’s CEO recently told Recode that his company is in a race with Amazon and Alibaba to be the first company to surpass $1 trillion in annual gross merchandise sales. Entering the ocean freight market to create a streamlined, vertically-integrated system for Chinese factories to sell directly through Amazon would be a classic Bezos response to Wish’s threat.

Why Amazon will make a fantastic ocean freight forwarder

Ocean freight is cheap right now. As of January 2016, Flexport’s ocean freight customers were paying less than $1300 to ship a 40-foot container from Shenzhen to Los Angeles. More than 10,000 parcels can fit in a single container, so the price for the ocean freight leg could be as low as $0.14 per parcel. Here’s another way to think about that figure: Right now it costs under $10 to ship a flat screen television across the Pacific.

With ocean freight itself so low, a considerable portion of logistics costs come through labor costs—particularly compliance and coordination of cargo handoffs between different players in the chain. It’s here that automation, something no traditional freight forwarding company can do even one percent as well as Amazon can, becomes the key competitive advantage over legacy freight forwarders. By using software to eliminate additional transaction costs associated with government filings, status updates, pricing, booking and more, Amazon will be able to cut their costs significantly. At the same time, fulfilling products directly from China to consumers in the U.S. will cut handling costs at U.S. warehouses.

If we’ve learned anything from Amazon’s strategic playbook over the last two decades, we can expect that it will price freight as close to marginal costs as it can get.

With the integration of its worldwide network of fulfillment centers and the combination of its new fleet of cargo jets, Amazon will be able to build a world class logistics platform for small and medium sized Chinese businesses.

Amazon’s ocean freight offering could be a huge hit for Chinese merchants. But I predict that Amazon will fail to win traction with U.S. brands. American companies will simply not be willing to turn over sensitive supply chain data to a major competitor and channel partner. Amazon’s reputation for ruthless competition and its desire to dominate every market on planet earth will make it difficult to convince U.S. companies to move their international freight onto this new platform when it launches.

Update: A previous version of this article says that Amazon received a license to carry ocean freight. Properly speaking, it has registered with the FMC to provide ocean freight services.