Routes, not Jets - Impact of Ukraine Conflict on Airfreight

The Russia-Ukraine conflict raises a wide range of business uncertainties. In prior Flexport research we outlined basic supply chain exposures, including in the energy sector.

This post adds to an initial set of views from Flexport’s CEO, Ryan Petersen, regarding the situation for airfreight. It considers the impacts of: airspace restrictions on routings, a potential loss of Ukrainian air freight capacity, and sanctions on Russian aerospace equipment and airlines.

The most significant impact is the need for rerouting around the conflict zone, extending transit times, and increased carbon emissions.

The FAA and EASA (U.S. and EU regulatory agencies) have issued NOTAM (Notice to Airmen/Air Missions) messages that essentially place all of Ukrainian and Russian air space off limits to commercial flights.

Some flights between Asia and Northern Europe will need to be rerouted via new southerly routings over Saudi Arabia, amid restrictions linked to Iran, Syria, and Yemen. 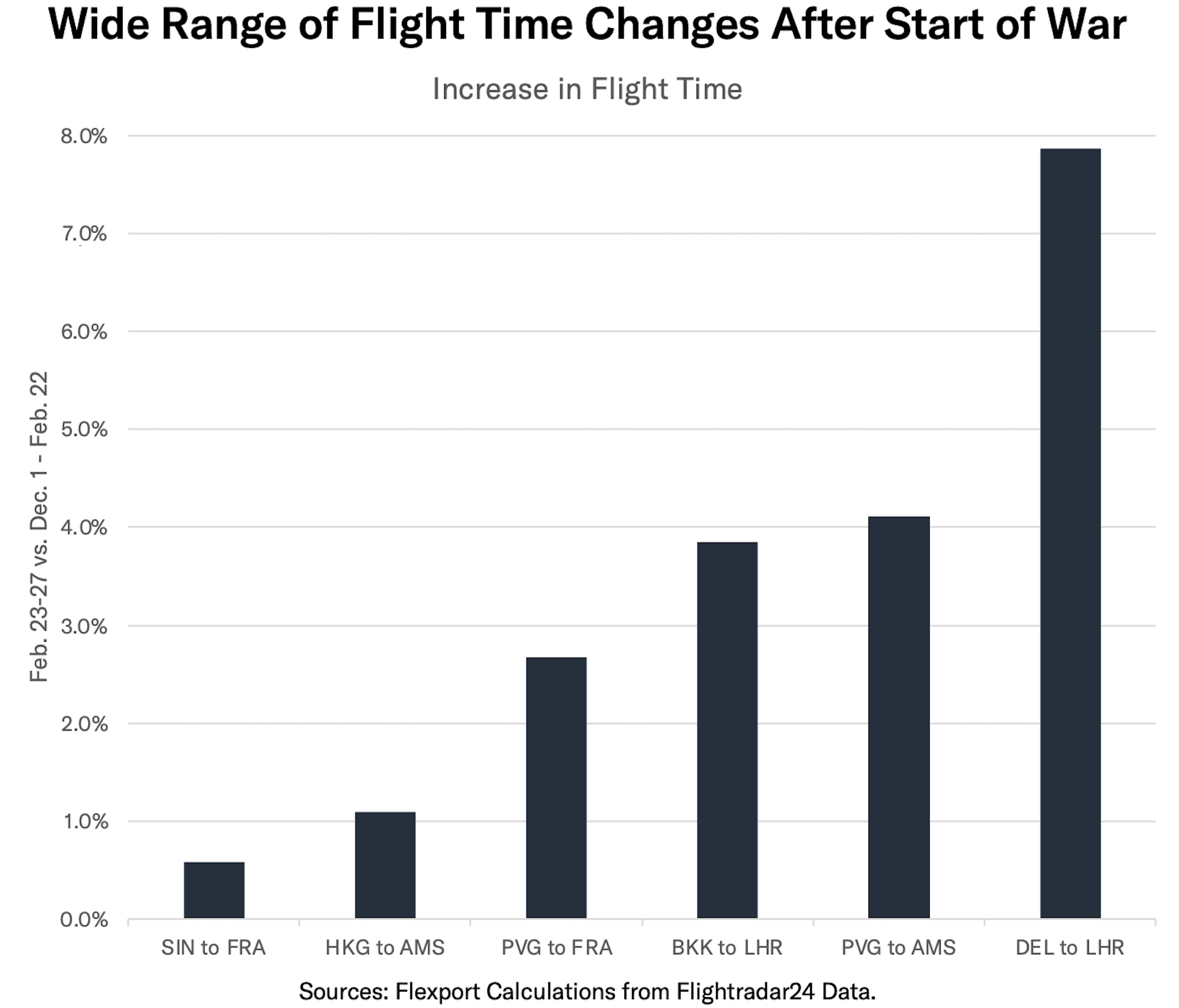 The reduced air corridor space will likely lead to slower flight times. Flexport’s analysis of flights on six key trade routes from Asia to Northern Europe shows that average flight times have increased by 3.4% (range 0.6% to 6.9%) in the five days to February 28 compared to the December 1 through February 22 period.

Further analysis across more routes will become possible in the coming days and weeks as routings mature. While not a large number at face value, the time equates to higher costs and high carbon emissions.

It is worth noting that many flights from China and the northern part of Southeast Asia as well as South Korea and Japan typically travel north of the affected region.

A significant unknown at this stage is whether Russia will react to EU and Canadian actions to restrict access of Russian airlines to their airspace. Should they do so, this may create more widespread air freight disruptions given many Chinese and north Asian flights route over northern and central Russia. The potential measure has already led at least one airline to review its operations.

Ukrainian cargo airline, Antonov, is both based in and operates its maintenance operations at Ukrainian airports. The potential loss of part of Antonov’s fleet will complicate the heavy lift industry in particular.

Antonov’s fleet of 15 jets provides specialist services to the heavy lift industry, for example, moving large pieces of power plants, outsize vehicles, or other aerospace components. The most famous of these is the AN-225, designed to carry 250 tons or 1,200 CBM of capacity. The jet’s owner has stated that the AN-225 has been destroyed.

Flexport’s analysis of flight data, shown on the map above, indicates that 10 of Antonov’s 15 jets, accounting for 47% of its 1,410 tons of firm-wide payload and including AN-225, last landed in Kiev, Ukraine. However, only four of those planes have flown in 2022.

The remaining five, all AN-124 class with 150 tons capacity each, have landed in Europe or the U.S. in the three days leading up to Feb. 27. Antonov may nonetheless face challenges in maintenance of its equipment outside Ukraine should spare parts only be available in Ukraine.

Coordinated sanctions against Russia from the EU, the U.S. and other G7 members will limit the operations of Russian airlines. Sanctions may also include limitations, via export licenses, on provision of aerospace spare parts and services. In addition, Several lease firms have reportedly confirmed they will end their contracts with Russian airlines.

The 43 jets of the Volga-Dnepr Group, which includes AirBridgeCargo, features 27 Boeing and 11 Antonov jets. For Aeroflot, 82% of its fleet are Airbus or Boeing planes. The impact on global airfreight may be minimal given both airlines each represented less than 0.5% of global airfreight carried in 2019.

The closure of European airspace to Russian-owned or operated jets will also restrict activities. Deliveries of airfreight into Russia may be disrupted by countervailing sanctions by Russia against other airlines as well as a potential unwillingness of airlines to fly there in the face of parts shortages and conflict.

In conclusion, the main impact of the war on global airfreight is on routing rather than capacity. Flexport can help logistics professionals understand their exposure through: our Visibility services; Flexport.org’s carbon calculator; and our customs and compliance services. Please reach out to your Flexport contact or email us for more assistance.