A Guide to the Largest Ocean Carriers in the World

The largest container shipping company in the world is the Maersk Line, which is part of the Danish conglomerate A.P. Moller – Maersk Group.

The 600 vessels of the Maersk Line can carry 3 million twenty-foot container boxes. It transported $675 billion worth of goods in 2012. At that volume, here’s how much it costs to transport various goods from Asia to Europe: $10 for a flat-screen TV; 11 cents for a pair of sport shoes; 4 cents for a t-shirt; and 5 cents for a tablet.

If the containers of Maersk alone were lined up, they would stretch halfway across the planet. Until recently, Maersk operated the largest container ships in the world, the Triple-E, which are capable of holding 18,000 twenty-foot containers. (It has now been surpassed by ships that can carry 19,000 containers.) The Triple-E weighs 165,000 tons and has as much steel as eight Eiffel Towers.

Maersk was founded in 1928 and based in Copenhagen, Denmark. It’s such a large company that its revenues are 14% of Denmark’s GDP.

It can carry nearly 3,000,000 container boxes, measured as twenty-foot equivalent units (or TEUs). That gives it approximately 14.7% of the market share in container shipping. Its revenue in 2014 was US$48 billion.

Maersk has been innovative in multiple ways. Besides leading the way in investment of new shipping technologies, Maersk has been unprecedentedly transparent. In addition, it’s the ocean carrier doing the most to reduce shipping-related pollution.

The Mediterranean Shipping Company (or MSC) was founded in 1970 by Gianluigi Aponte, an Italian. It’s headquartered in Geneva, Switzerland, right on the sunny Mediterranean coast. (Just kidding, Geneva is quite far from the Mediterranean Sea; MSC’s most important port at Antwerp, Belgium, is also far away.)

CMA CGM only broke into the top 10 carriers in 2000. It’s been one of the companies most aggressive about expanding market share. In December 2015, CMA CGM purchased the Singapore-based Neptune Orient Lines, which controls 500,000 TEUs through the shipping line APL.

Hapag-Lloyd is a Hamburg-based firm formed from the merger of two 19th century companies: The Hamburg-Amerikanische Paketfahrt AG and the Norddeutscher Lloyd.

Evergreen is based in Taoyuan, Taiwan. It was founded in 1968 by Dr. Chang Yung-Fa, who planned ambitious round-the-world services heading both east and west. Its ships were then able to circumnavigate the world 81 days going east and 82 days going west.

Evergreen has a capacity to handle 930,000 TEUs, and has about the same market share as Hapag-Lloyd’s at 4.6%. Given the scale of its orders, it’s expected to soon surpass the scale of Hapag-Lloyd.

The China Ocean Shipping Company is based in Beijing. The previous five carriers are either privately- and/or family-owned. COSCO is owned by the Chinese government.

There has long been talk of merging COSCO with China Shipping, the other state-run shipping firm in China. After consideration by the government, this merger is expect to go through in early-2016. It would form the world’s fourth largest carrier line, with a capacity of over 1.5 million TEUs. 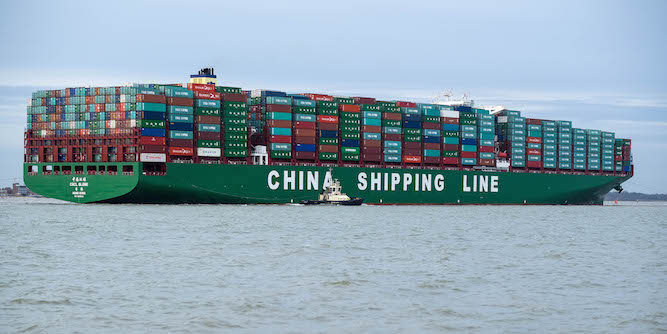 China Shipping, also known as CSCL, is based in Shanghai. It is once again a company owned by the Chinese government.

China Shipping has a capacity of 700,000 TEUs, which is about 3.4% of the market. After its merger of COSCO (see above), the new company would have a market share of about 7.6%.

All carriers are suffering from low ocean rates due to a slump in global trade, and more importantly, to over-investment in capacity. Global demand is not expected to pick back up soon, and the carriers have not cut back on ordering new and larger ships. Therefore we can expect ocean rates to stay low for the next several years.

Notice that few companies were established after the container revolution of the 1960s. Nearly every carrier except the European ones were founded after the advent of containerization. All of these are firms that adapted to the future or outcompeted the legacy businesses Consider that Maersk bought its first container ship only in 1973.

The current top five ocean carriers are all either private- or family-owned. Maersk may be a public company, but the majority of its shares are in family hands. In addition, for roughly 100 years Maersk was run by two men: Møller père and Møller fils.

China Shipping and COSCO will soon merge, and CMA CGM has recently acquired NOL. This is an industry that rewards scale, and we should expect more consolidations in the future.

Unless specified otherwise, photos in this piece were taken from the image galleries of featured ocean carriers.

Read this next >> A Guide to Ocean Alliances