The airlines you fly with organize themselves in alliances, and so do ocean carriers. Instead of cooperating to move passengers, ocean carriers cooperate to move freight. Carrier alliances are vessel-sharing agreements: all carriers within an alliance pool together their fleets of ships, moving containers on one anothers’ behalf to extend their service offerings and geographic coverage.

How do ocean alliances operate?

Around 2008, Maersk began investing in a new fleet of vessels, larger than any before. These new larger vessels would give Maersk a prohibitive advantage in the market: with lower operating costs per container than any other carrier, they would be able to dominate on price. The other carriers were forced to invest in their own giant vessels just to stay competitive. Soon, container ships worldwide swelled to record capacities.

Those familiar with the freight industry are well aware of what happened next: the market was flooded, demand failed to keep up with the available supply, and container rates tanked. So, you might wonder: if carriers’ vessels have so much spare capacity, why would they need to pool their resources through an alliance?

In short: no carrier can afford to buy and operate the number of vessels needed to offer weekly sailings across every port they serve. Alliances let carriers offer more sailings with fewer vessels.

For example: let’s say that you want weekly service between Busan and Rotterdam, with various port calls in between. Most carriers run vessels at 18 knots an hour on this trade lane, and one-way transit time is about 5.5 weeks. In other words, it takes a vessel 11 weeks to loop Busan and Rotterdam. Instead of dedicating 11 vessels to this lane, a carrier can rely on the vessels of others in the same alliance. 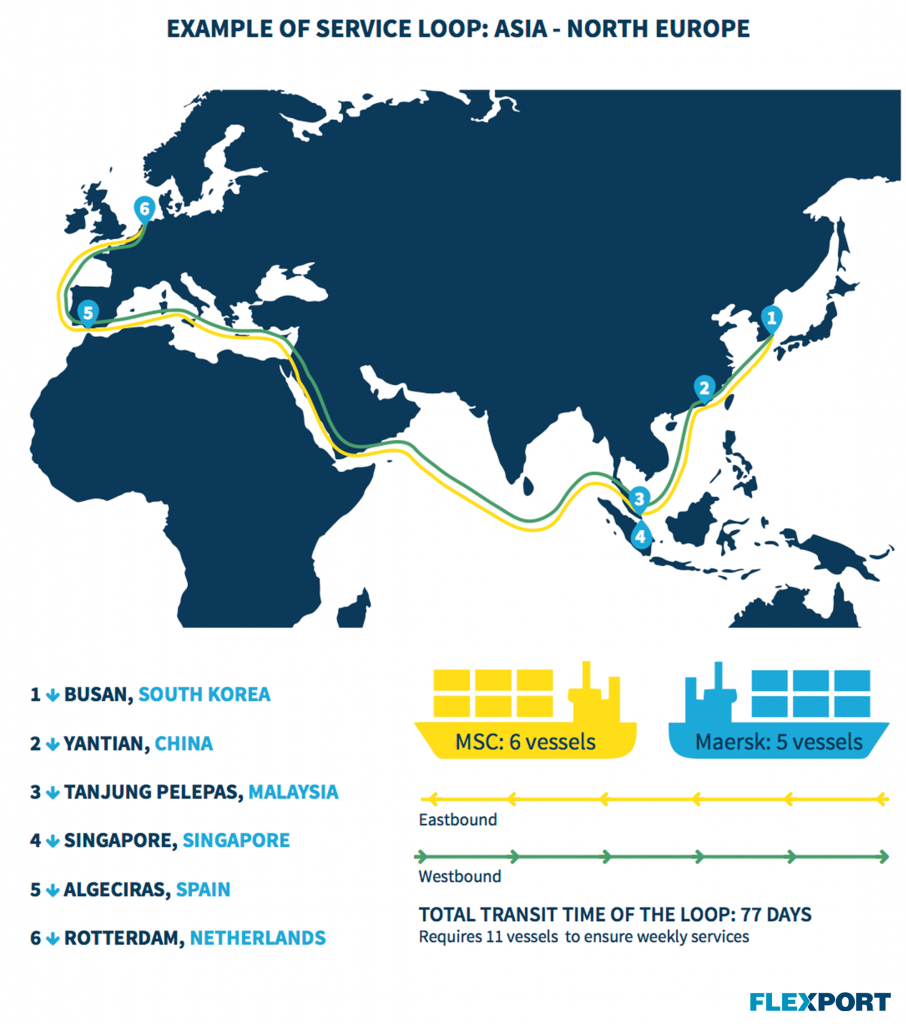 Here are the most important things to know if you ship goods: 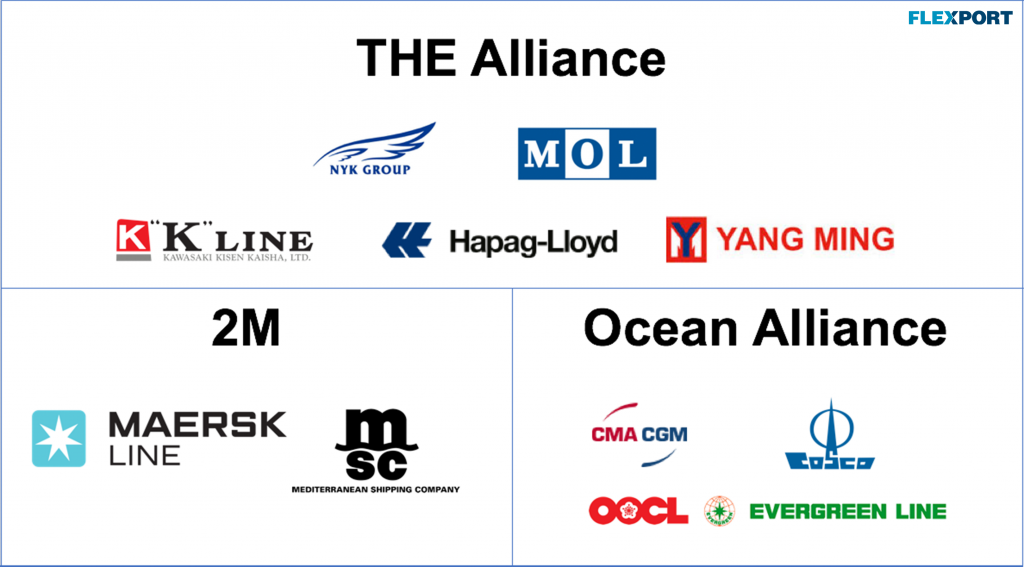 What are the major ocean alliances?

There are currently four major carrier alliances in the market but by the start of the new contract season there will be only three major alliances, of which only one has a romantic name. We highly recommend reading our piece introducing the major ocean carriers to understand more about each of these companies.

Maersk and MSC have a combined capacity of about 6 million TEUs, and that’s about 29.5% of the overall global market share in container capacity. Maersk announced at the end of 2016 its plans to acquire Hamburg Sud, subject to regulatory approval. The new merger would push 2M’s container market share to 33.4%.

The 2M alliance was in discussions with HMM about possible membership, but ultimately decided to go with a Vessel Sharing Agreement (VSA), rather than full membership. Under the agreement, HMM will purchase slots on the 2M routes connecting Asia with North Europe, the Mediterranean and the US East Coast, while continuing to operate Asia – US West Coast services on its own, with Maersk and MSC taking slots. Maersk and MSC will take control of an undisclosed number of vessels currently operated by HMM on the Asia – Europe and Asia – USEC routes. These vessels will be operated and marketed by Maersk and MSC, downgrading HMM to slot buyer thereby removing their purchasing power. 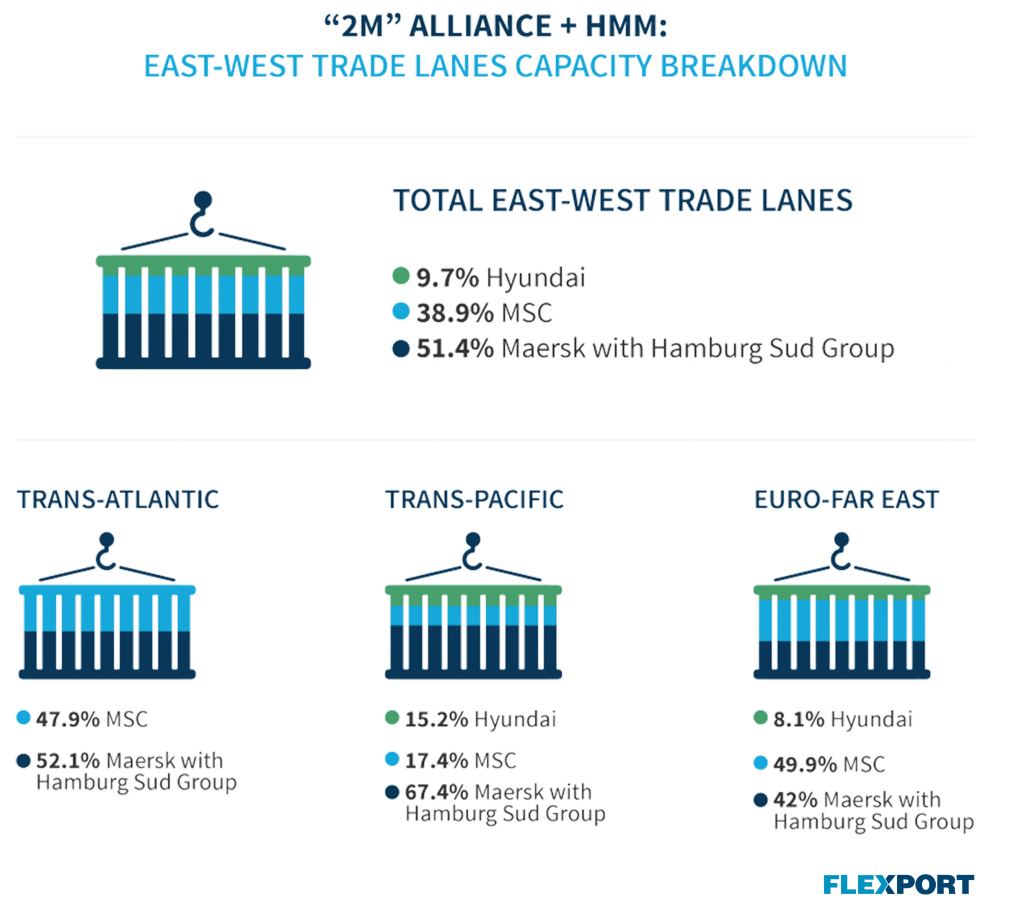 The Ocean Alliance brings together the world’s 3rd, 4th, 5th, and 9th largest container lines and is seen as a direct attempt to counterbalance the dominance of the 2M alliance in the market. This follows CMA’s recent takeover of Neptune Orient Lines and the consolidation of its APL, USL, and ANL brands, as well as COSCO’s giant merger with China Shipping. The Ocean alliance will represent roughly 26% of global container capacity or about 5.5 million TEU’s.

The Ocean Alliance will own 41.43% market capacity on the Transpacific trade lane, and 34.86% in Asia-Europe, allowing for considerable strength across both major trade lanes. 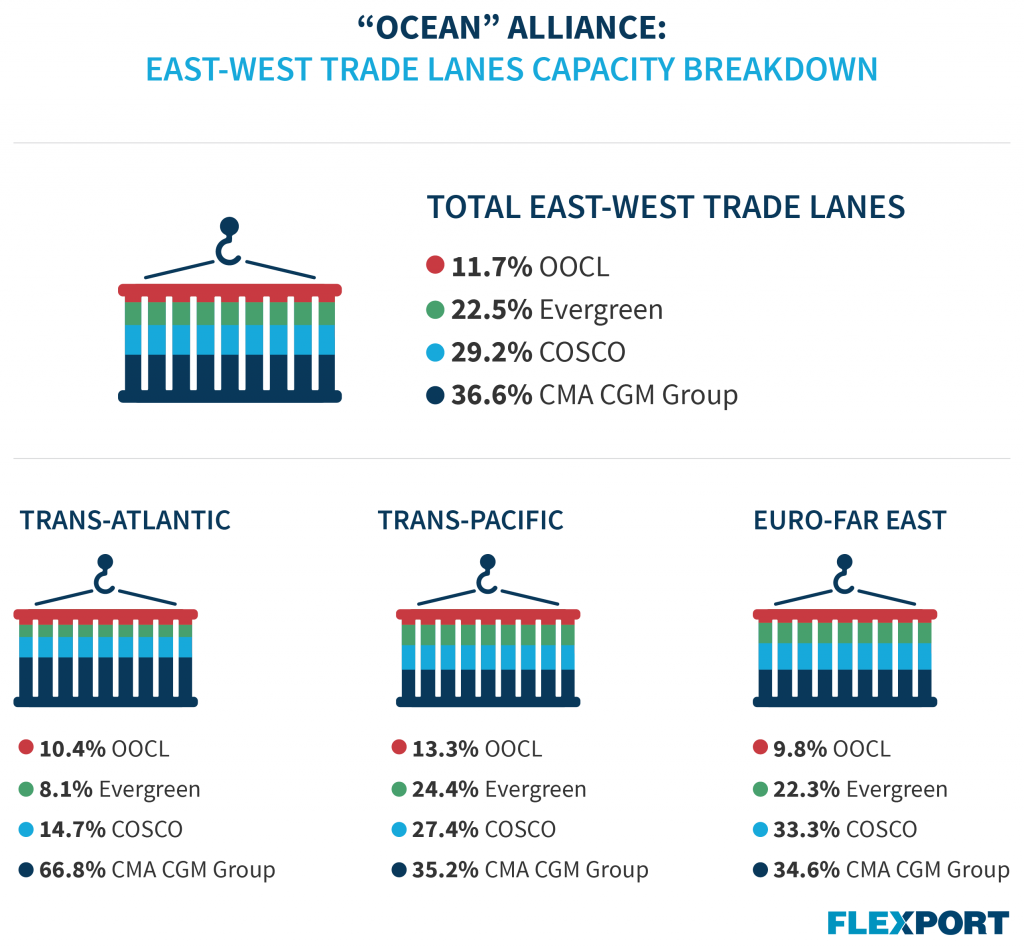 THE is another alliance marked by the industry’s recent moves towards greater consolidation. Hapag-Lloyd is looking to finalize talks to bring its merger with UASC to completion, while the three Japanese carriers in the alliance announced their intentions to merge, creating the sixth largest container operator in the world. THE will represent roughly 16% of global container capacity.

THE Alliance will have 28.68% market capacity on the Transpacific trade lane and 23.41% in Asia-Europe. 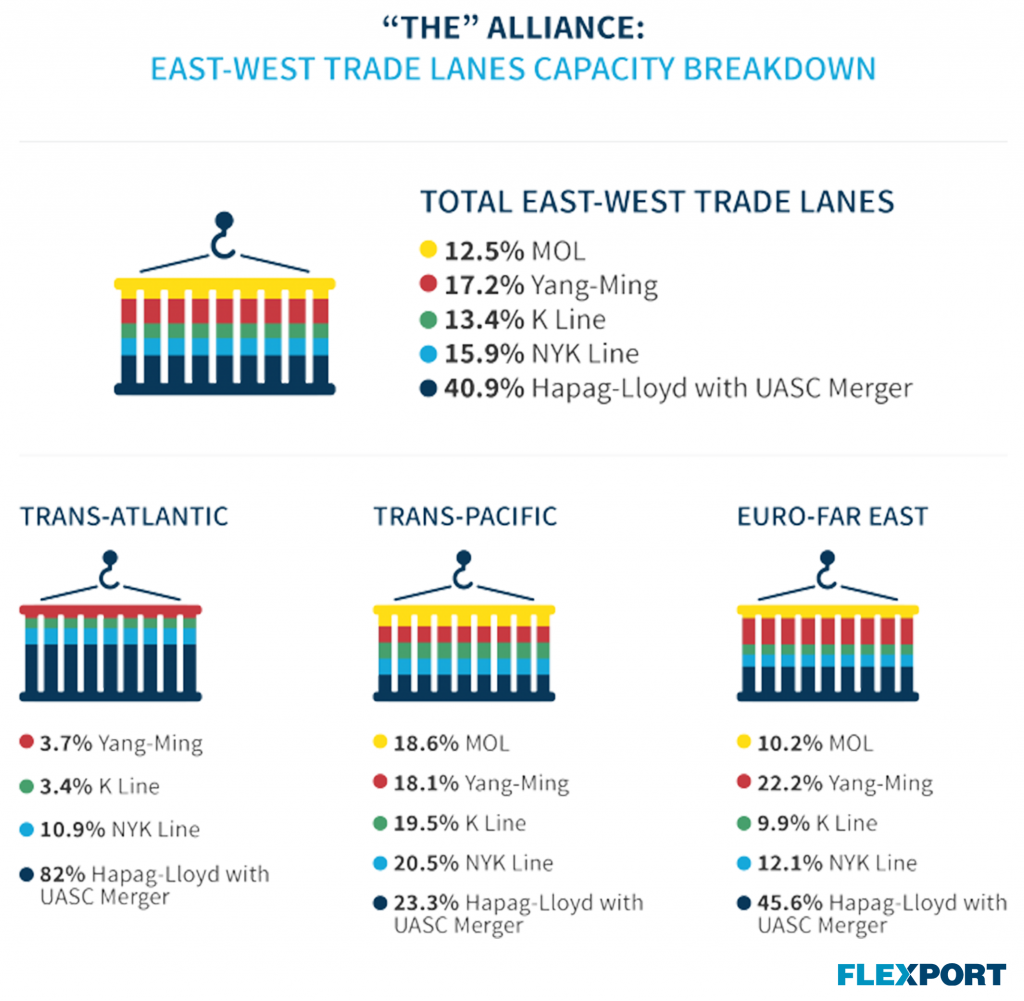 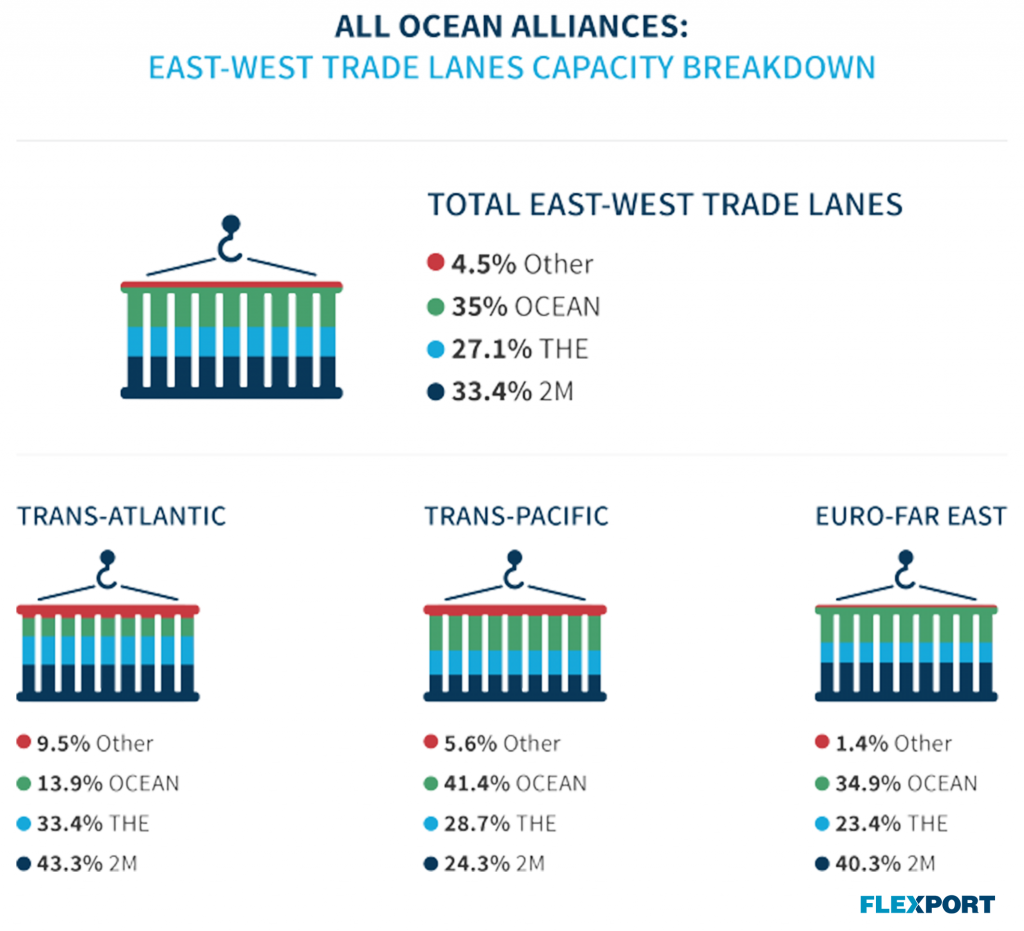 Not every alliance covers every major trade route. For example, note that 2M is largely entirely absent from the Indian subcontinent.

These alliances are pragmatic arrangements, which means that their compositions change every few years.

2016 has been a particularly tumultuous year marked by historically low ocean freight rates, major shifts in the alliance landscape, and rapid industry consolidation exacerbated by the recent Hanjin collapse. CMA CGM purchased APL, Hapag-Lloyd and UASC will merge, and the three Japanese carriers (KLINE, MOL, and NYK) have agreed to form a joint venture. The assembly of both the Ocean and THE alliances were in part, at least, to challenge the dominance of the longstanding 2M alliance (particularly now that they will incorporate HMM in some capacity to boost their Transpacific market share). The events of 2016 serve as a testament to how quickly the landscape in this industry can shift and how even these newly constructed alliances are always subject to potential change.

ShareTweetShare
About this author
Nerijus Poskus
Ocean Alliances: Everything You Need to Know
What you need to know about the Emergency Bunker Surcharges