Ocean and air freight rates and trends; customs and trade industry news plus Covid-19 impacts for the week of September 13, 2022.

The Ocean Market has entered a new phase.

The Transpacific Eastbound (TPEB) specifically is seeing a post-COVID plummet.

Multiple trades are experiencing rate declines from their pandemic highs, but the TPEB has been declining at an unprecedented rate since late July. Far from a traditional peak season on the trade, rates are plummeting to levels not seen since 2020.

The reason for these unexpectedly precipitous rate drops is actually a combination of traditional supply and demand factors.

Supply—though still far from predictable with congestion-related blank sailings steadily sapping 20-30% of capacity—has been pretty stable for the last two quarters in total TEU deployment and monthly improvements in transit reliability. Meanwhile Demand has been decreasing due to high U.S. inventory levels and U.S. consumer purchasing moving towards a pre-COVID spread of goods and services. See more details on these Supply and Demand factors on Flexport’s Freight Market Update from September 8. And check out Flexport Research for insights from the first government export report for August from South Korea that shows a decline in most major consumer exports.

So far, there’s no indication of where or when rates will settle. Golden Week in early October will provide a breather, likely before an October and November demand lull where, traditionally, TPEB sees some of the lowest rates of the year.

While rate declines are good for cost savings, there’s still a lot of challenges out there with congestion, chassis shortages, and more blanks on the horizon. Please reach out to your Flexport Account Management team to strategize on how best to navigate through these waters in Q4 and into 2023. 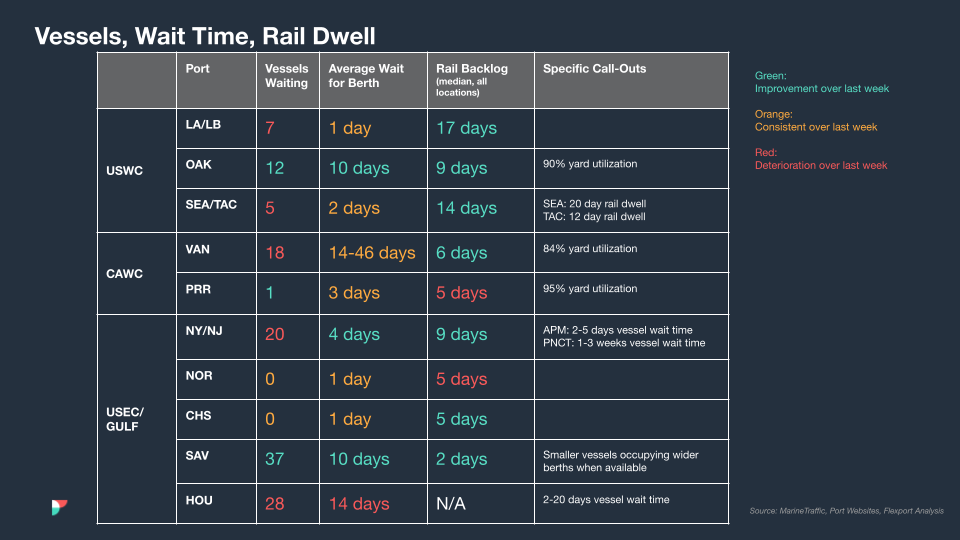 U.S. Customs and Border Protection announced the modification of the Withhold Release Order (WRO) against Natchi Apparel (P) Ltd. garment imports. Effective September 7, Natchi Apparel shipments will be allowed to enter U.S. commerce, including shipments that have previously been detained. CBP lifted the WRO due to sufficient evidence that Natchi Apparel (P) Ltd., located in India, had addressed all five of the International Labour Organization’s indicators of forced labor identified by the WRO.

On September 8, a bipartisan group of Florida’s Congressional delegation filed a petition with the Office of the U.S. Trade Representative (USTR) requesting the initiation of a Section 301 investigation into certain Mexican agricultural products. The petition alleges Mexico's trade practices rise to the level of export targeting, and pose a threat to the Florida agricultural industry, U.S. food security, and consumer pricing.

According to SupplyChainDive, the four largest US railroads have begun limiting service on Monday in anticipation of a potential rail strike. Currently the two of the largest labor unions and contracting rail lines have not been able to reach an agreement. A nationwide rail strike could generate $2 billion in lost economic output per day.

According to The Loadstar, with inventories in the US and Europe reaching near capacity, demand for Chinese exports is on the decline. This aligns with the decrease in spot rates to both the USWC and USEC.

U.S. imports were down from June to July, while exports rose. For imports, this continues a pullback that dates to March 2022. Looking back to the onset of the pandemic or even the year before, though, imports have shown substantial growth.

Have corporate inventories gotten out of control? Have all industries seen similar trends? What are firms doing to manage the inventory aspects of their supply chains? This report finds that, in the aggregate, corporate inventories have rapidly moved from being inadequate to being at, or even above, pre-pandemic levels.