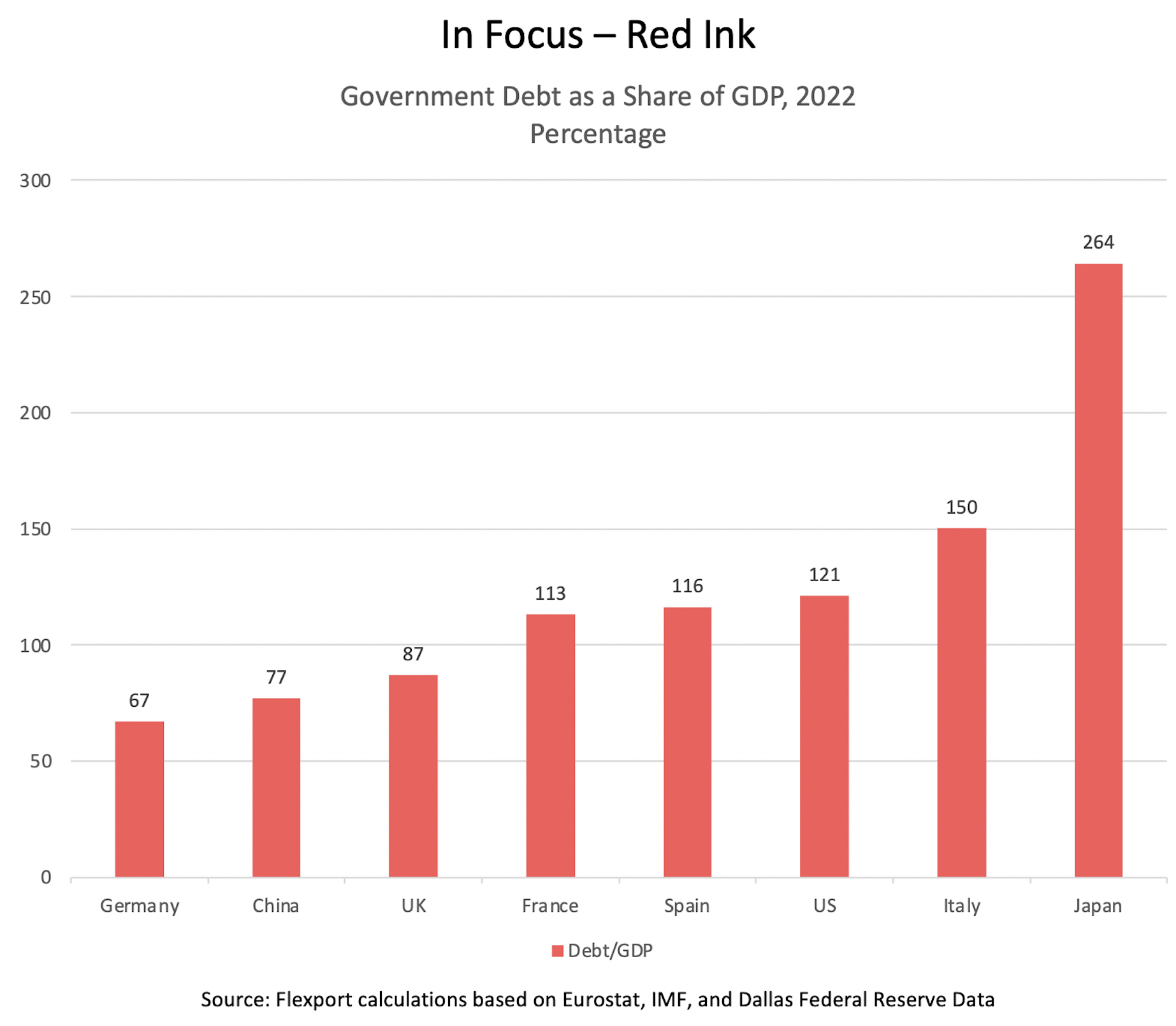 The European Union released government debt figures this past week. The headline was optimistic: government debt was down to 94.2% of GDP in the Euro Area. That Q2 figure was down from 95.2% at the end of Q1.

Should we be interested in the region as a whole, or in the debt of individual countries? In the planning stages of European monetary union, it was clear that the critical obligation was on countries to keep their debt at manageable levels. As the German Bundesbank reports on its website, the Maastricht treaty required countries to keep government debt below 60% of GDP. How important was this requirement? “Sound public finances are the cornerstone of a stability-oriented monetary union,” per the Bundesbank.

The problem comes when a country borrows excessively and needs help. In a country like the US or the UK, the central bank can come to the rescue if lenders begin to lose faith and interest rates start climbing. In fact, this is what the Bank of England just did as part of an effort to save UK pension funds.

For a member of the Euro Area, like Italy, the situation is notably different. A bailout, if there were to be one, would have to come from the European Central Bank. That would therefore involve other Euro Area countries in the bailout. Hence the ex ante strictures about acceptable debt levels.

Except, as the chart shows, neither Germany, nor France, nor Spain, nor Italy is within the 60% limit. These are the four largest economies in the monetary union.

These questions were papered over while the ECB was easing through negative policy rates and bond purchases. Those bond purchases served to hold down spreads between borrowing countries—just the sort of thing one would do to allay concerns about creditworthiness. The questions reemerge amidst high inflation and rising rates.

Both inside and outside the Euro Area, rising rates pose a concern for highly indebted countries (in the past, 100% debt to GDP was a rule-of-thumb for highly-indebted). Higher rates directly affect how much governments have to pay on new borrowing. Further, in most cases existing government debt was borrowed for only a limited time. The US Treasury, for example, sells notes for 2,3,5,7, or 10 years. When those notes mature, the debt either has to be repaid or refinanced. If it is refinanced, then the pinch of higher rates will be felt and debt servicing costs rise.

In recent years, when governments have tried to sell debt, they’ve had willing buyers in the central banks, who were accumulating the debt to hold longer-term interest rates down. Now, though, those central banks are trying to reverse policy and even engage in quantitative tightening by selling off bond stocks. That would drive interest rates higher still.

So what does a government do if the cost of financing its debt rises significantly? It borrows more. You see the problem.

Flexport’s State of Trade webinar discussed the meaning of the “worker-centric” theme at the heart of Biden administration trade policy and the implications for trade liberalization.

A flash estimate of Euro Area consumer confidence showed a small rise in October, but remained near September’s record low.

Japan showed rapid trade growth in the year to September, with imports outpacing exports. Imports rose by 45.9%, with oil, natural gas, and coal in the lead. This is the latest in a series of strong import growth months and likely reflects the weakened yen, which makes any fixed quantity of goods priced in dollars significantly more expensive when measured in yen. Exports grew by 28.9%, led by cars, chips, and electronic parts.

US manufacturing output was up 0.4% in the month to September, and up 4.7% from September 2021. The Federal Reserve also reported that September manufacturing capacity utilization was at 80.0%, its highest level since April.

The National Association of Realtors reports that existing US home sales fell by 1.5% in the month to September, and were down 23.8% from a year before. Lest this sound like a glut of unsold houses, though, the inventory of unsold homes was down for the second straight month and the median sales price has roughly kept pace with inflation over the last year, up 8.4%.

The Communist Party Congress of the People’s Republic of China appointed Xi Jinping to a third five-year term as general secretary of the party and head of the Central Military Commission. The meeting also set the membership of the seven-member standing committee.

A Peterson Institute for International Economics study of the effects of Section 301 tariffs on China four years in found mixed evidence on decoupling. Some categories of US imports had fallen significantly—electronics, clothing, and furniture among them. But other categories have risen to new highs—laptops, monitors, video game consoles, and toys. Overall US imports from China have only recently surpassed June 2018 levels and remain well below the trend from before the trade war.

UK Prime Minister Liz Truss announced her resignation last week. The Conservative Party has already commenced discussions about who will replace her.