After a strong run-up in the value of the dollar in the first part of last year, the dollar has depreciated significantly against four major currencies in the last few months. The most likely explanation for these moves lies in actual and anticipated swings in interest rates across the world’s major economies. 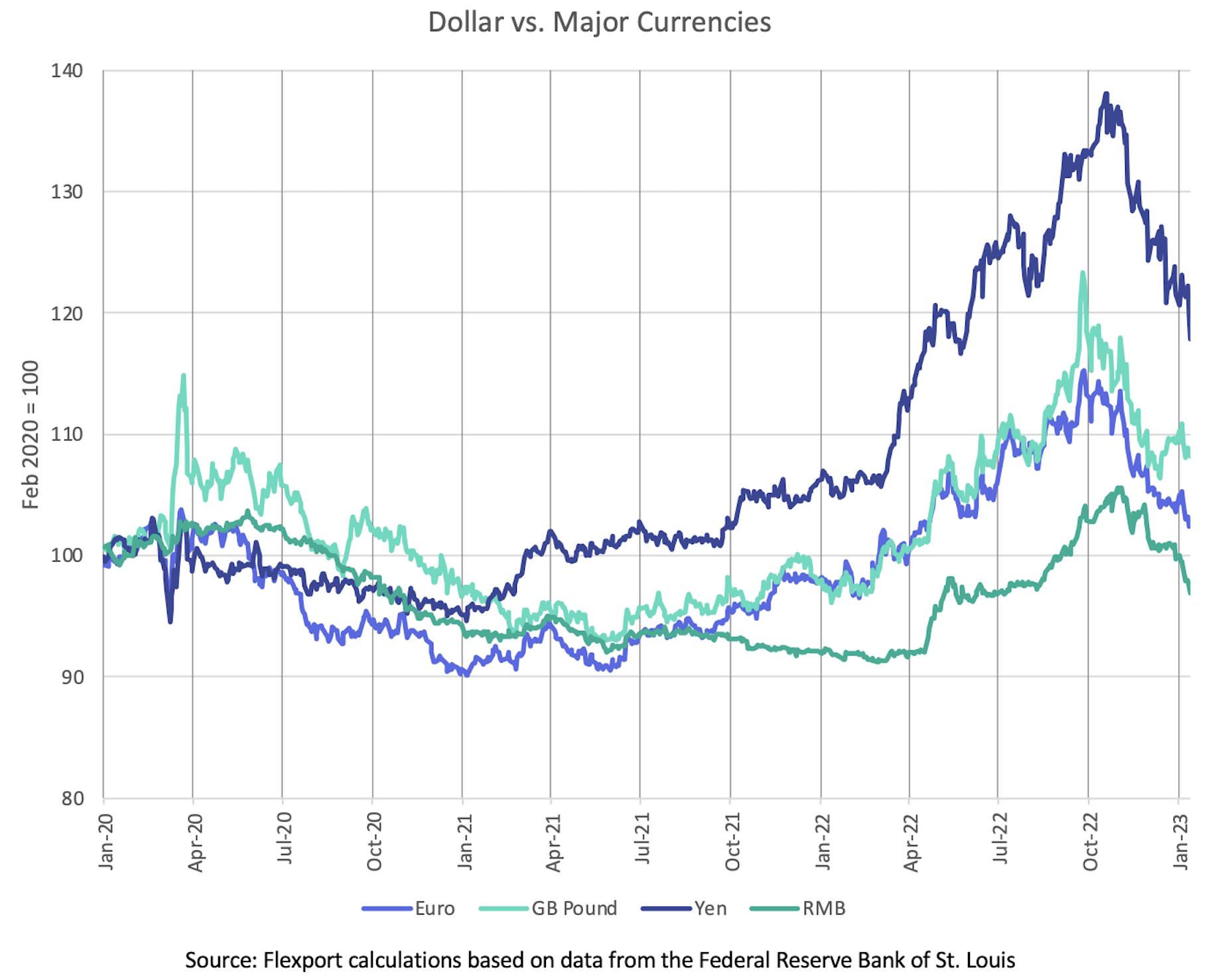 The pandemic era brought more than its share of challenges for international commerce. There were dramatic movements in both the expense and time it took to move freight. But for the first two years from pandemic onset, dollar exchange rates stayed in a relatively modest range. Then, last spring, one began to see really significant movements in the dollar.

The chart above arranges the records of four major currencies against the dollar in such a way that, from an even starting point in February 2020, upward movements mean dollar strength relative to the other currency, and we can read percentage changes in the currencies from that initial level right off the graph.

While the magnitudes differ, the broad pattern of the dollar’s behavior from roughly April 2022 is consistent across the four currencies. The dollar appreciated significantly until about October; hence, US exports looked more expensive and imports look cheaper. Then, the pattern reversed and in recent months we’ve seen a rapid depreciation of the dollar.

From recent peak to the chart’s concluding date of January 13, the dollar falls by 9.0% against the Chinese RMB, 12.4% against the Euro, 13.9% against the British Pound, and 17.2% against the Japanese Yen. Nonetheless, the dollar is still stronger against each of the currencies than it was in early 2022.

Why would we see such big swings in exchange rates? There are two broad reasons why we think exchange rates move. The first is more of a long-term rationale – rates may move to equalize the price of tradable goods across markets. Holding everything else equal, if a ton of steel costs more in the United States than it does in Japan, there is an incentive to import that steel from Japan into the US. Across a bundle of goods, one can calculate the exchange rate that equalizes the bundle’s price across two countries; this is known as the Purchasing Power Parity (PPP) exchange rate.

A second, more likely explanation is that exchange rates also serve to clear financial markets. If a US-based investor is deciding between a US bond and one valued in Euros, she will compare interest rates and expected exchange rate depreciation. If one side of that ledger starts looking better, e.g. with a European interest rate hike, dollars may flow into euros, seeking higher yield and driving dollar depreciation.

This is one more reason to keep a close eye on central bank actions. Not only are their big moves driving mortgage rates and economic growth, investor anticipation of future moves is also driving swings in the cost of imports and exports. This poses yet another challenge for those engaged in international trade.

This past week we refreshed our forecasts for the Post-Covid Indicator (PCI), the Trade Activity Forecast (TAF), and the Flexport Consumption Forecast.

Euro Area annual inflation fell to 9.2% in December, down from 10.1% the month before. The inflation rates for “core” indices that exclude food and energy rose for the month.

-The UK inflation rate was also 9.2% in December, down from 9.3% in November. The largest upward contributions were from energy and food. The annual core rate rose from 5.7% in November to 5.8% in December.

U.S. retail sales fell 1.1% from November to December, after seasonal adjustment but without taking inflation into account. Stepping back from volatile monthly numbers, comparing 2022:Q4 retail sales (excluding motor vehicles and parts and gasoline) with 2022:Q3 (seasonally adjusted), there was a 0.7% increase. Comparing 2022:Q4 with a year earlier, there was a 7.1% increase, which roughly kept pace with inflation.

The U.S. Producer Price Index fell by 0.5% in December. The broad PPI was up 6.2% over the year before, or 4.6% if one excluded food, energy, and trade. All of these were the lowest figures recorded in at least a year.

The manufacturing component of US Industrial Production fell by 1.3% in December, following a 1.1% fall in November. It is now down 0.5% for the year to December. Capacity utilization fell 0.6 percentage points in December to 78.8 percent, a level below the long-term average.

U.S. December existing home sales fell sharply, down 1.5% from November and down 34.0% from a year before.

In December, Japanese Exports were up 11.5% over a year before, while imports increased by 20.6%.

The U.S. hit its debt limit on Thursday. The Treasury began to implement special measures to continue paying bills. Treasury Secretary Janet Yellen warned both that it was uncertain when the capacity to implement such measures would be exhausted (perhaps June) and that failure to resolve the situation could cause a global financial crisis.

In remarks at Davos, WTO Director General Ngozi Okonjo-Iweala warned against the trend toward “friend-shoring” – moving supply chains to countries that are aligned politically – and argued in favor of “reglobalization.” She also cautioned against a subsidy race on environmental policies.

In a response to the US Trade Representative’s request for comment on US China tariffs, Flexport’s Tom Gould wrote that “Tariff barriers like the Section 301 tariffs create policy uncertainty, drive higher consumer prices, and undermine American companies’ ability to compete in a world of global supply chains.”