Flexport’s Consumption Forecast (FCF) shows the outlook for real (i.e. inflation-adjusted) Personal Consumption Expenditures on a seasonally adjusted basis. Our latest update shows modest growth in consumption, whether measured as Q4’22 over Q4’21 (up 0.6%) or over the four forecast months which run through January 2022. January’s consumption looks to be up 1.9% from September of this year.

The Methodology: The Flexport Consumption Forecast that follows augments time series analysis with insights gleaned from Flexport data. There is generally a relationship between what ships in September and what people consume in November, for example. Our methodology takes advantage of that correlation to produce a more accurate forecast.

Update November 18, 2022: The elevated pressure on global supply chains has been the result of several factors in combination: strong incomes, a willingness to spend rather than save, and a heightened preference for goods in consumption. Flexport’s Consumption Forecast tracks personal consumption expenditures by category on a seasonally adjusted basis. 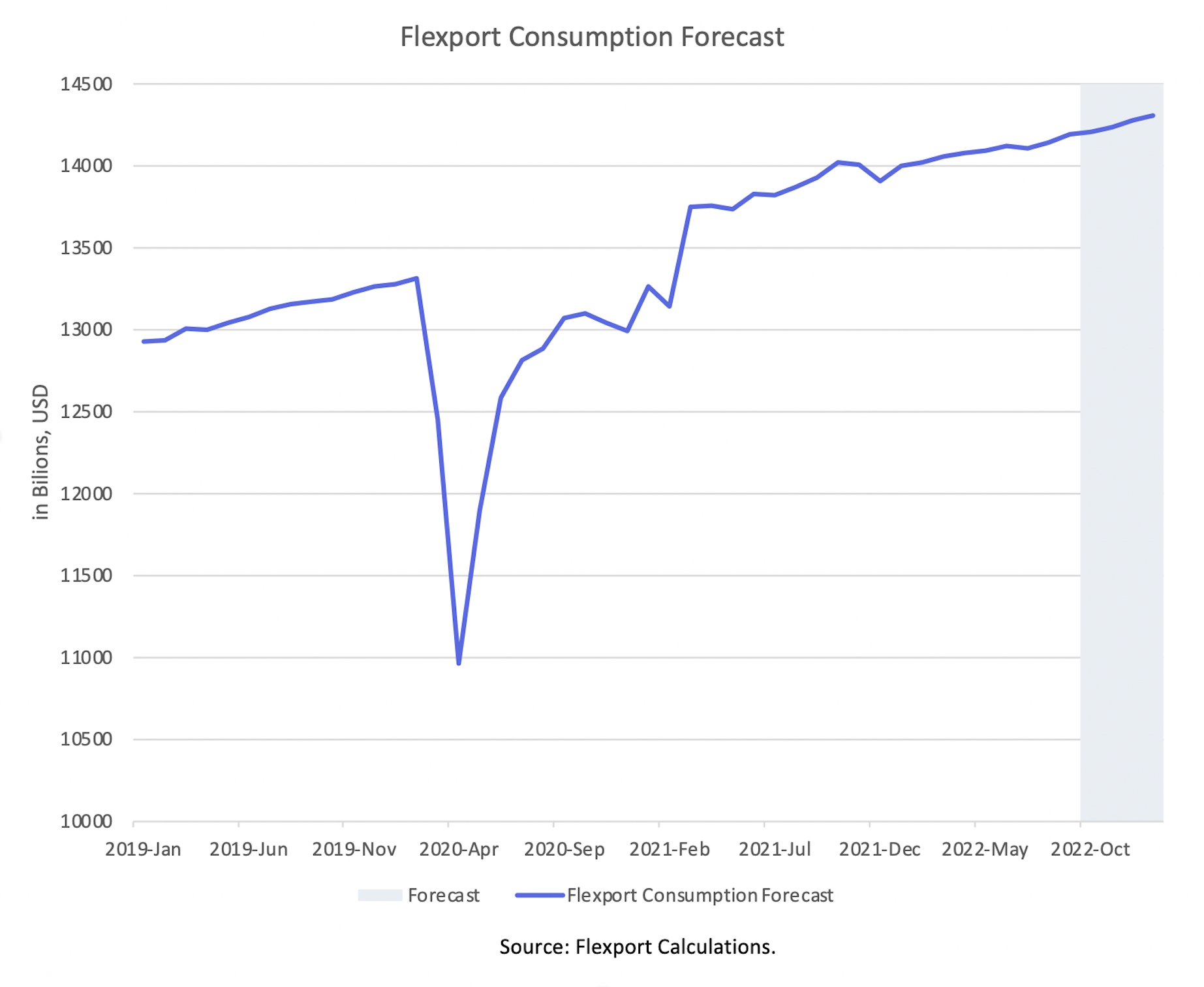 Fig. 1 Shows the track of real US Personal Consumption Expenditures (PCE) through the onset of the pandemic. From that period through the end of 2021, there was a striking level of volatility in overall consumption behavior, which settled a bit as 2022 approached. Throughout 2022, the growth in PCE has been notably steadier.

According to the Flexport forecast, December 2022 total PCE will be up 2.7% from December 2023. With this month’s addition of a forecast for January 2023, that extra month is predicted to be up 0.2% over December 2023, showing growth at an annualized 2.3% rate. 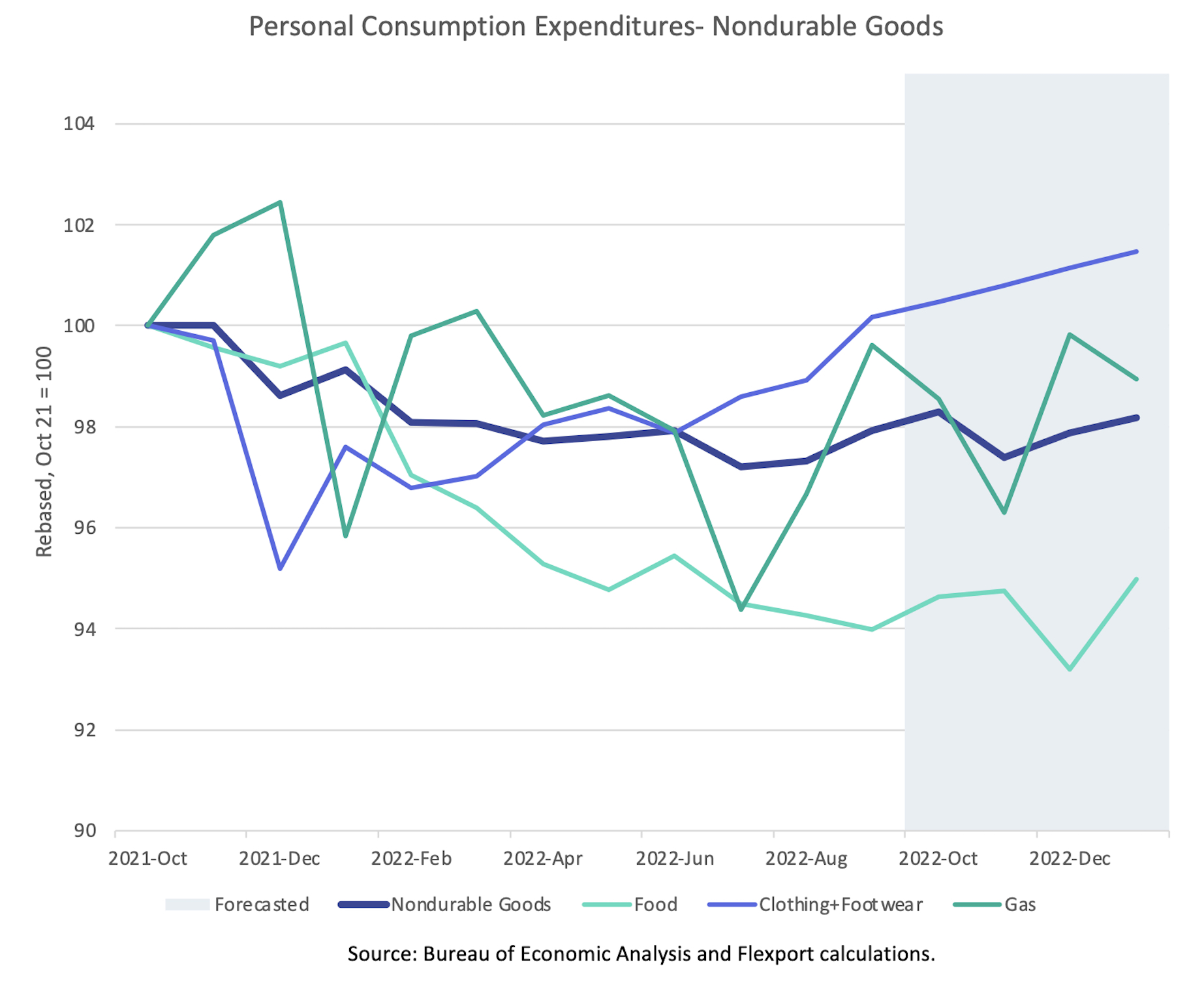 Fig. 2 shows that consumption of nondurable goods—those intended to last for less than three years—has been relatively stable in the year to our October forecast. Food is the biggest drag on the category, while clothing and footwear is the only subcategory shown to regain its October 2021 level after an initial dip. For the clothing and footwear category, real consumption in Q4 of 2022 is forecast to be up 2.5% from Q4 of 2021. Bringing January 2023 in, the four months of forecast show real consumption growth of 1.3% in the category from the last reported data (Sept. 2022). 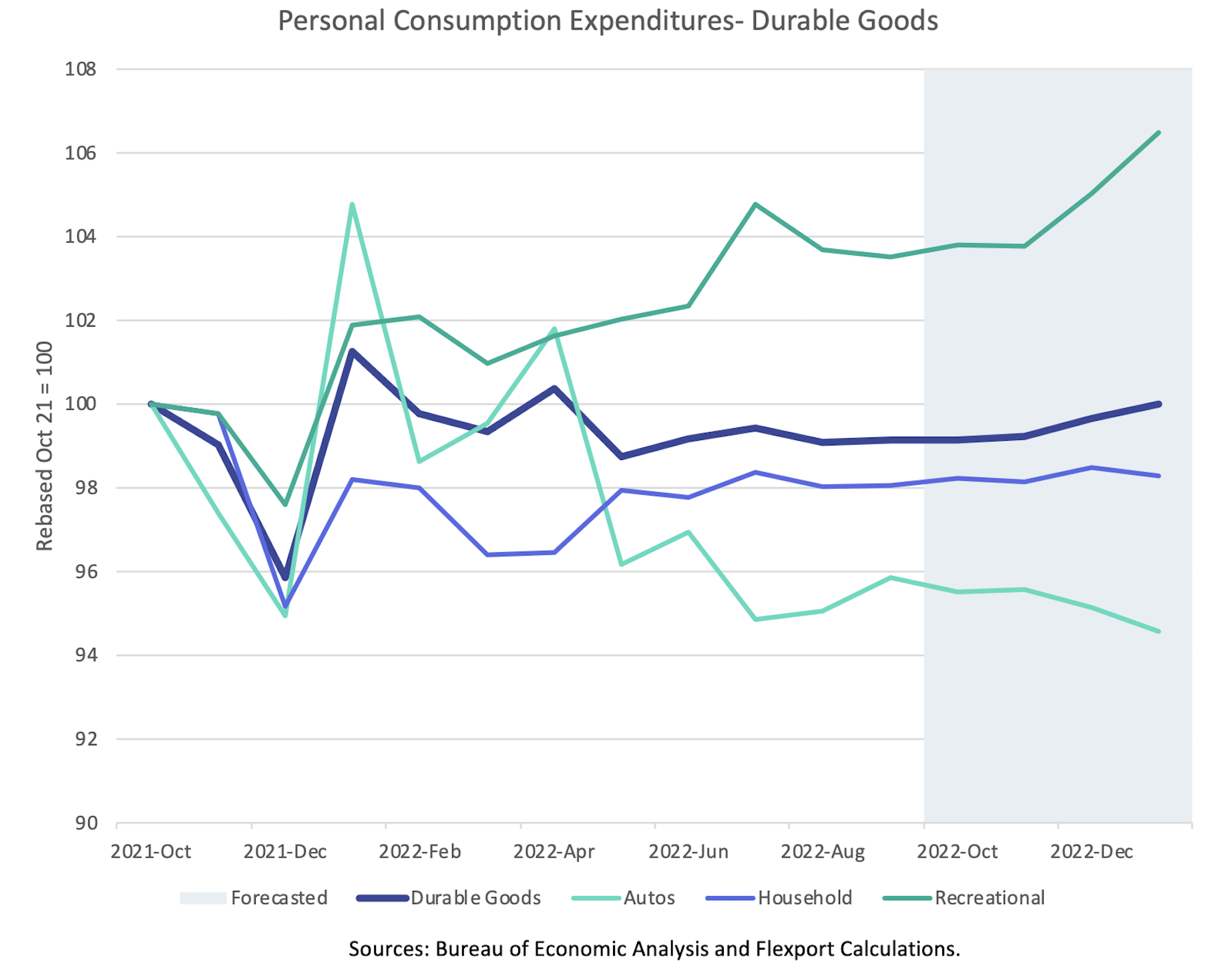 Durable goods consumption has been notable for its continued strength during the pandemic. Over the last year it has held fairly steady, though note that the scale of Fig. 3 differs from that of Fig. 2. For durable goods, the laggard of the category is autos, with Q4 of 2022 down 2.1% from Q4 of 2021. January 2023 is predicted to be down 1.4% from September 2022. In contrast, Q4 2022 recreational goods consumption is forecast to be up 5.1% from the year before, with January 2023 seen as up 2.9% from September 2022.

More detail and customizable charts for the Flexport Consumption Forecast can be found at Flexport Research.

The next update for the Flexport FCF will be on December 15. The U.S. Bureau of Economic Analysis will release October data on December 1. Data for November will be released on December 23.

Please direct questions about the Flexport PCI to economics@flexport.com.