In Focus - Full Employment and Beyond 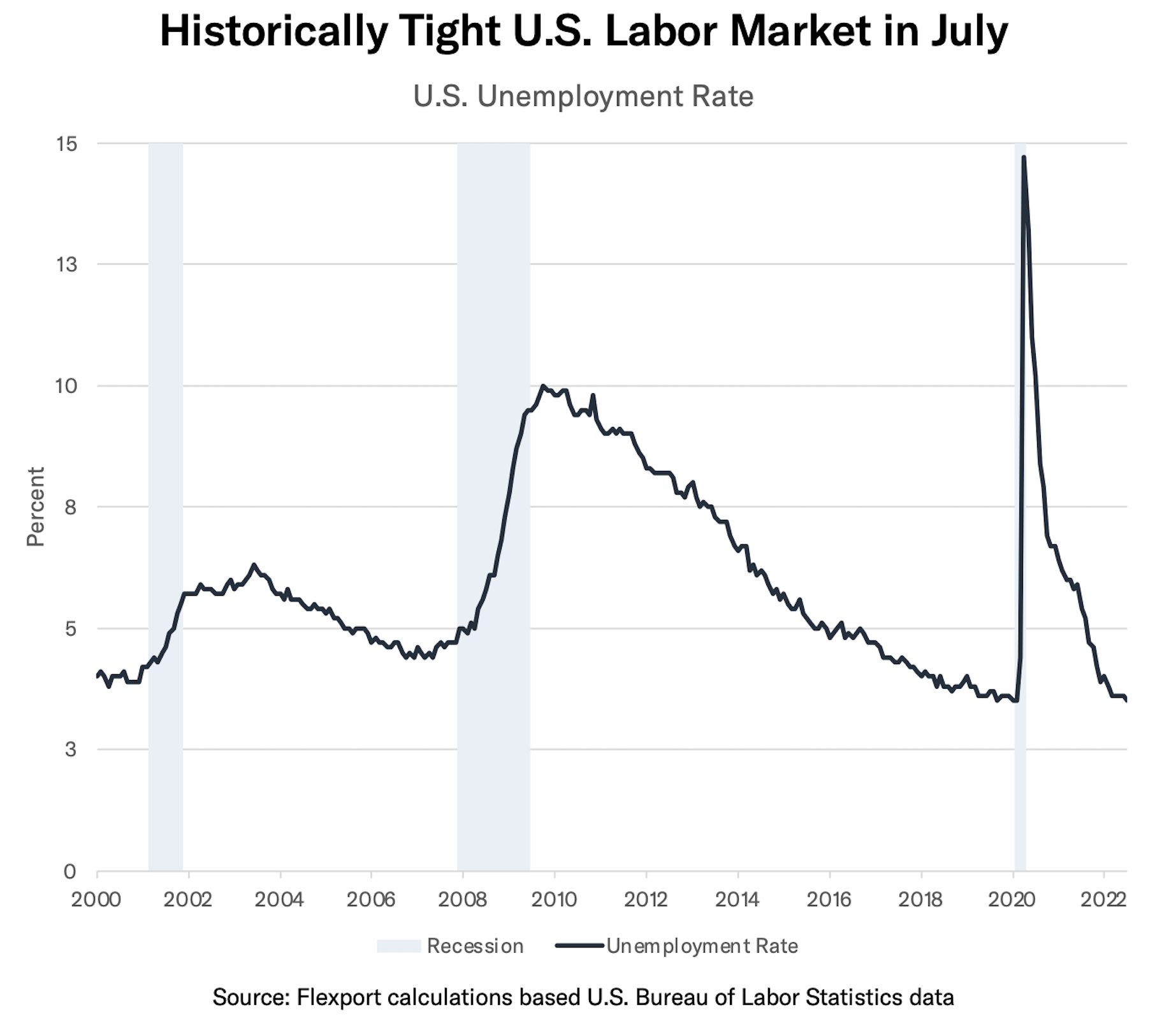 In July, the U.S. unemployment rate fell to 3.5%, an extraordinarily low level. The economy last touched on these levels just before the onset of the pandemic, hitting 3.5% in September of 2019, and January and February of 2020. Before that, we last saw 3.5% in December of 1969.

Is there such a thing as an excessively low unemployment rate? Yes, according to conventional economic reasoning. Economists often looked at a “natural” rate of unemployment, which was sometimes called the “Non-Accelerating Inflation Rate of Unemployment (NAIRU).” The idea is that, without a certain minimal level of unemployment, the economy would overheat, we would see wages driven up, and prices would follow. Not only would we have inflation, but the inflation rate would increase (accelerate).

The challenge is that there is no easy way to identify NAIRU without a lot of hairy estimation techniques. Estimates have varied over time, but one recent estimate from researchers at the San Francisco Fed put the NAIRU at 6%. Other private estimates have been lower, but not down to 3.5%. That would suggest that the low unemployment rates we’re seeing may drive inflation upwards.

This is not a purely academic exercise. The Fed’s dual mandate requires it to focus on price stability and full employment. GDP growth or contraction is not part of the Fed’s mandate, no matter whether talk of a recession captures the public imagination.

The Fed has defined ‘price stability’ as roughly 2% inflation. By its preferred measure, Trimmed-mean PCE, inflation is currently 4.3% and accelerating. Whether there is full employment depends on the exact NAIRU estimate, but the July jobs report gave a very clear signal that there is.

Sometimes a strong headline unemployment number conceals weaknesses that appear by other measures. That did not appear to be the case in July. U.S. nonfarm payrolls rose by 528K in June on a seasonally-adjusted basis. That followed an average 384K in each of the prior three months and defied expectations for a slowdown to 250K.

Total nonfarm employment returned to its pre-pandemic level, though there has been a notable shift: Private-sector employment in July 2022 was 629K higher than in February 2020; government employment was 597K lower.

The employment-population ratio for prime age workers (ages 25-54) was 80.0% in July, close to its highest levels in the last two decades.

Over the 12 months to July, average hourly earnings have increased by 5.2%. The Atlanta Fed wage tracker shows wages growing even faster, with a 6.7% estimate for June.

So with all this job market strength, what comes next? This will likely be a clear signal to the Fed to keep raising rates. The economic impact depends a bit on whether the market already has this priced in. Current yields suggest that it doesn’t. At the moment, the yield on 2-year Treasury securities is just above 3%, which should roughly match expected average short-term rates over the next couple years. Yet the Fed would hit that level with a single additional 75 basis point increase.

Current yields would make sense if the Fed were to do one more hike and then hold. The hot July jobs report suggests the Fed is likely to do more than that.

Flexport research reports in the past week included an in-depth review of the state of the German economy and the risks coming from reduced natural gas supplies. We also provided a precis of our recent State of Trade webinar which took a look at the prospects for U.S. tariffs on imports from China.

Oil prices continued their slide. West Texas Intermediate (WTI) futures fell below $88/barrel, down significantly from prices above $120 in March and June.

EU retail sales (excluding food and fuel on an inflation-adjusted basis) dropped by 3.4% year over year in June, the first such decline since February 2021. Online sales fell by 9.0% on the same basis to reach their lowest since September 2020.

Producer prices in the Euro Area continued to increase in June, rising by 1.1% versus May and marking the 25th straight increase. Energy prices rose by 2.7% after two monthly declines. Durable and nondurable goods both increased by 0.7% with both rising at a slower pace than in May.

U.S. consumer borrowing increased, with New York Fed data showing a nominal 13% increase in credit card balances from Q2 2021 to Q2 2022, the largest increase in 20 years. The share of debt in delinquency was rising, but remains historically very low.

U.S. manufacturing activity, measured by the ISM survey, reached its lowest since June 2020 in July. A reading of 52.8 (over 50 indicates expansion) compares to a peak of 61.1 in November 2021. There’s been a steady decline since then. Inventory deliveries rose to their highest since July 1984, indicating a rapid rebuild of stocks of goods.

South Korea’s goods exports increased by 9% on a non-seasonally adjusted, nominal basis in July. Exports of commodities led the way on higher prices with oil exports up by 36%. Exports of PCs and phones dropped by 17% to their lowest level since August 2020. Shipments of semiconductors increased by just 2%, the slowest growth since April 2020.

A new survey shows that shipments of mobile phones globally fell by 7% year over year in Q2’22. That was the fourth straight decline and is partly attributed to retail and factory closures in China. The slide has led at least one phone producer to reportedly cut production at its Vietnamese phone factory.

The Bank of England raised interest rates by 0.5%. Importantly, it also noted that it expects inflation will peak at 13% in October with a two year glide path back down to 2%. The BOE is also forecasting a recession from Q4'22 and “inflation-adjusted household post-tax income is projected to fall sharply in 2022 and 2023, while consumption growth turns negative.”

The Canadian government has launched a dispute against U.S. tariffs on softwood lumber under USMCA rules. That adds to a pile of disputes between the three countries which also include: U.S. complaints about Mexican energy policy; various investigations of labor standards and; disputes by Mexico and Canada regarding U.S. automotive rules of origin.

Global airfreight activity fell by 6.4% year over year in June, according to IATA data. The association has noted that “headwinds including infrastructure and labor supply constraints persist”.

U.S. exports of liquefied natural gas to Europe fell to their lowest since October 2021 in July. That’s come despite efforts to increase shipments in response to lower supplies from Russia. The closure of a major LNG export terminal due to fire damage is a likely contributor.

U.S. auto sales increased by 2.5% sequentially on a seasonally adjusted basis in July to reach 1.15 million vehicles. A 4.4% rise in domestic light truck sales was offset by reduced foreign truck sales. Total sales are nonetheless still 9% lower than a year earlier and 22% below the same period of 2019.

Chart of the Week - Canceled Clothing 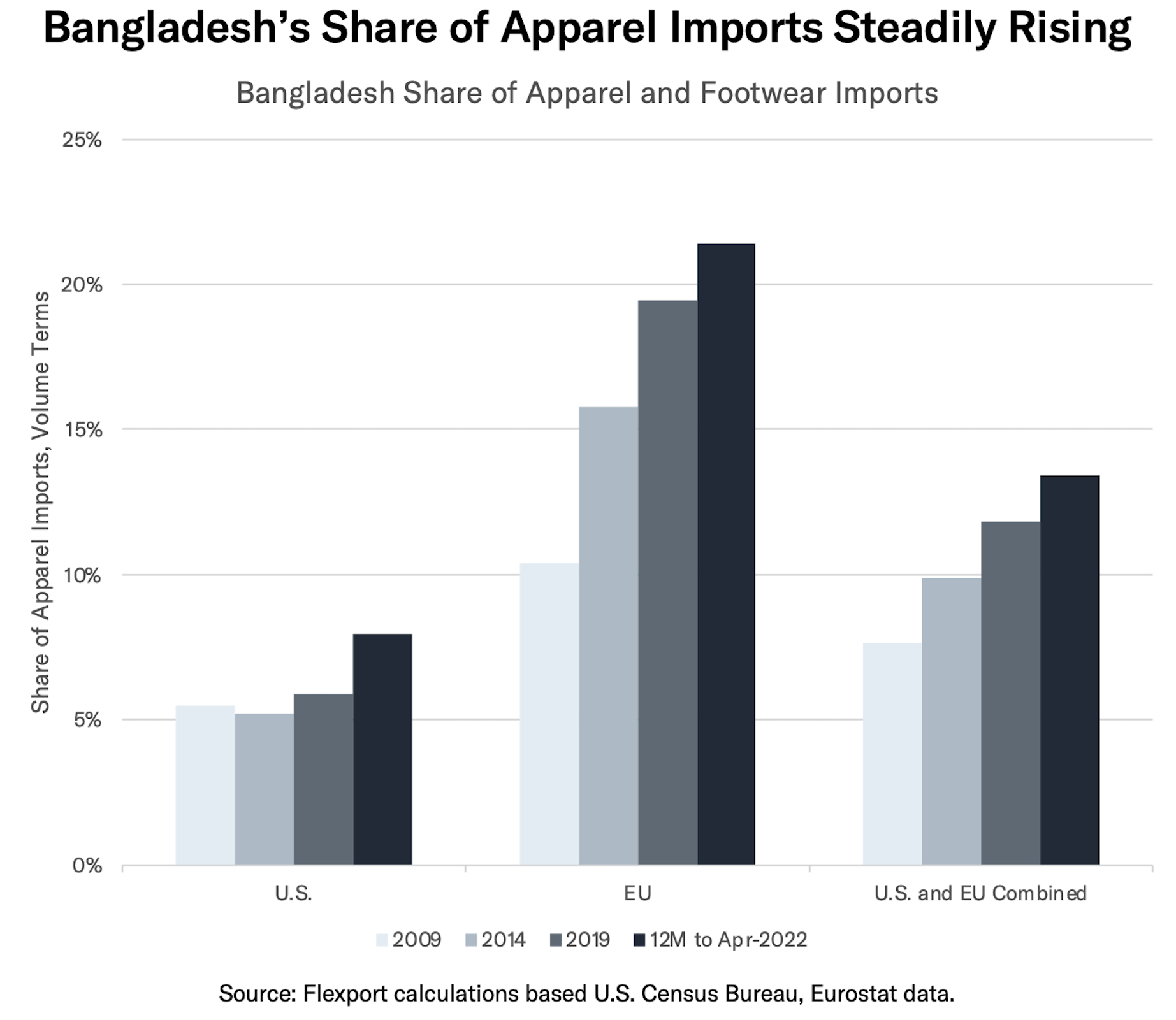 Apparel exporters in Bangladesh have warned that they are facing canceled orders from customers in the U.S. and Europe. The cancellations may reflect a rapid build up of surplus inventories. For example, the U.S. inventory-to-sales ratio for apparel stores reached 2.18x in May. That compares to a trough of 1.85x in September 2021. Yet, that was below the pre-pandemic (2019 average) of 2.42x.

A downturn would follow an extended period of expansion. Imports to the U.S. from Bangladesh (source U.S. Census Bureau) climbed by 27% year over year in May (inflation- but not seasonally adjusted) which was inline with the growth in total apparel imports.

Bangladeshi exporters have also built up their market share, as shown in the chart above, reaching a combined 13% market share of EU and U.S. imports combined in the 12 months to April 2022. That marked an increase from 12% in 2019 and 8% in 2009.