One of the premier global economic forecasts just downgraded its outlook for 2022 and 2023. The revisions were large, negative, and worse for next year than this. To top it off, the balance of risks to the forecast is negative. 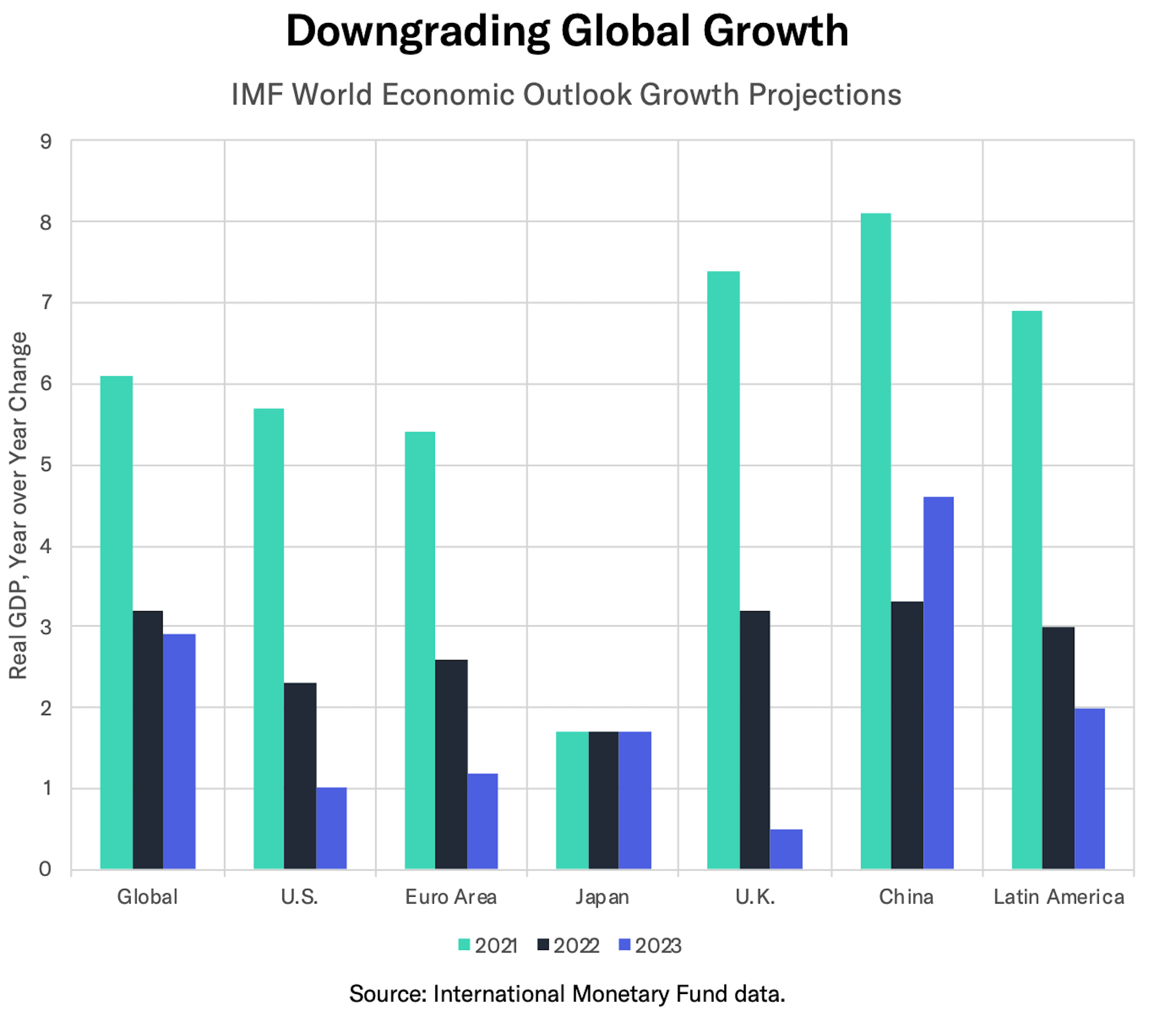 In the July revision of its regular World Economic Outlook, the International Monetary Fund continued to downgrade its forecast for the global economy. For the world as a whole, it now forecasts 2022 GDP to be 3.2% above the prior year, a drop of 0.4 percentage points from its forecast in April. The longer-run outlook fell even more, with the forecast for annual global growth in 2023 cut by 0.7pp to 2.9%.

The revisions were more severe for advanced economies than for developing economies. Advanced economies overall saw 2022 growth discounted by 0.8pp, with the biggest cut to the U.S. forecast, which dropped by 1.4pp to 2.3%. The pessimism for 2023 included a 1.3pp cut to U.S. growth to 1.0%, and a 1.1pp cut to Euro Area growth to 1.2%.

The European forecast included a massive 1.9pp 2023 downgrade for Europe’s largest economy, Germany, to 0.8% growth. The European revisions reflected spillovers from the conflict in Ukraine as well as expected tighter financial conditions as the European Central Bank responds to mounting inflation.

The biggest economic contraction is forecast for Russia, whose economy is projected to shrink by 6.0% in 2022 and 3.5% in 2023. The current-year forecast is actually a 2.5pp upgrade from the April assessment, while next year’s forecast is a 1.2pp downgrade.

Amidst all these growth numbers from a premier global forecaster, three broad trends emerge:

In its discussion, the IMF attributes all this to a series of shocks hitting the global economy which is struggling to recover from the Covid pandemic. Those shocks include higher inflation than expected and the tighter financial conditions that brings; slower growth in China; and negative spillovers from the conflict in Ukraine.

In addition to the headline growth forecasts, the IMF also offered predictions for world trade volumes (all marked down) and world consumer prices (all marked up). Goods and services trade is forecast to rise by 4.1% in 2022 (a 0.9pp drop from April) and 3.2% in 2023 (a 1.2pp drop). Trade growth in 2022 is predicted to be faster in advanced economies (5.3%) than in developing economies (2.2%), with both growing at about the same rate in 2023.

Lest this forecast come off as excessively cheery, the IMF concludes that “the balance of risks is squarely to the downside,” citing: potential increases in energy prices; persistent inflation; higher costs to central bank tightening; debt distress in emerging markets to accompany energy and food shortages there; and fragmentation of the world economy into geopolitical blocs.

The Flexport Ocean Timeliness Indicator for Transpacific Eastbound (TPEB) routes dipped to 94 days in the week to July 31, the lowest since the first week of September 2021. Flexport’s Air Timeliness Indicator meanwhile held steady at 11.3 days, a level it has been - at on average - since mid-March.

Flexport research reports in the past week included a deep-dive into the state of global commodity prices and the impact of falling food, metals and energy prices on supply chain inflation. We’ve also taken a look at the potential reasons for mounting congestion on U.S. railways.

A key U.S. inflation gauge showed no sign of relief. Of the multiple measures available, the U.S. Federal Reserve is most closely focused on a variant of the deflator for Personal Consumption Expenditures (PCE). The variant, called Trimmed Mean PCE, rose by 4.3% in the year to June, its highest value since April 1983. June marks the 17th consecutive monthly increase, dating back to February 2021. If one takes the annualized rate from just the monthly change in June, it showed 6.9% inflation, suggesting acceleration.

U.S. real disposable personal income fell by 0.3% in June, while real personal consumption expenditures (PCE) rose by 0.1%. Real services consumption was up 0.1%, nondurable goods down 0.4%, and durable goods up 0.9%. The durables rise was led by motor vehicles and parts. This closely tracked Flexport Research forecasts from earlier in the month.

The advanced figures for Q2 GDP in the U.S. showed the economy shrinking at a 0.9% seasonally adjusted annual rate. This follows a 1.6% decline in Q1. The biggest contributor to the Q2 number was a decline in private inventory investment. One closely-watched measure of demand, “Final sales to private domestic purchasers,” essentially flatlined, easily the worst showing since Q2’20.

Rising producer prices and concerns about further consumer price hikes in the face of ECB tightening have driven the IFO index of German manufacturing sentiment to -31 in July. While that was better than the trough in March it was still well below the 10-year average of 4.7.

U.S. merchandise trade increased by 0.6% sequentially in June, including a 2.5% rise in exports but a 0.5% drop in imports. The decline in imports included a 7.8% slide in automotive shipments while exports were flattered by a 5.3% rise in food shipments and a 6.5% rise in industrial supplies. The figures are nominal and do not adjust for price changes.

The U.S. Federal Reserve raised the target range for its policy rate by 75 basis points, noting low unemployment and inflation well above its 2% target. The rate is now in the 2.25-2.5% range.

The EU has launched infringement proceedings against the U.K. regarding the latter’s plans to change the Northern Ireland Protocol rules on: customs requirements; excise duty regulations including alcohol; and VAT for e-commerce. That comes as U.K. efforts to renegotiate the Northern Ireland Protocol have paused due to the change of Prime Minister.

The U.S. Senate and House have passed a $280 billion spending package which includes the long-awaited $52 billion of funding for semiconductor investments. The remaining funding will be directed towards both basic science and its commercialization. The bill now goes to the President for approval.

Around 100 technology and other firms operating in Shenzhen, China have been asked to move to “closed-loop” manufacturing for seven days in response to a COVID-19 outbreak.

U.S. retail inventories continued to inch higher in June, with preliminary data showing inventories ex autos rising by 1.6% sequentially. That resulted in a 1.17x inventory / sales ratio, the highest since May 2020.

Forecasts of demand for personal computers have been cut by several electronics firms in the past week, with a range of reductions from 5% to 10% year over year for 2022 provided by chipmakers. Peripheral suppliers appear more robust with price increases applied for VR headsets and input devices.

Cargo handling by airlines based in the Asia Pacific region fell by 4% year over year in June, marking a fourth straight decline. That came even as capacity increased by 7% due to increased passenger air transport and associated belly-hold capacity.

Workers at Felixstowe and Liverpool voted to strike next month, with the actual days still to be determined. Port strikes have already disrupted operations in Germany earlier in July, with industrial action widening across the logistics industry as regular contracts come up for renewal.

Chart of the Week - Gotta Get Gas 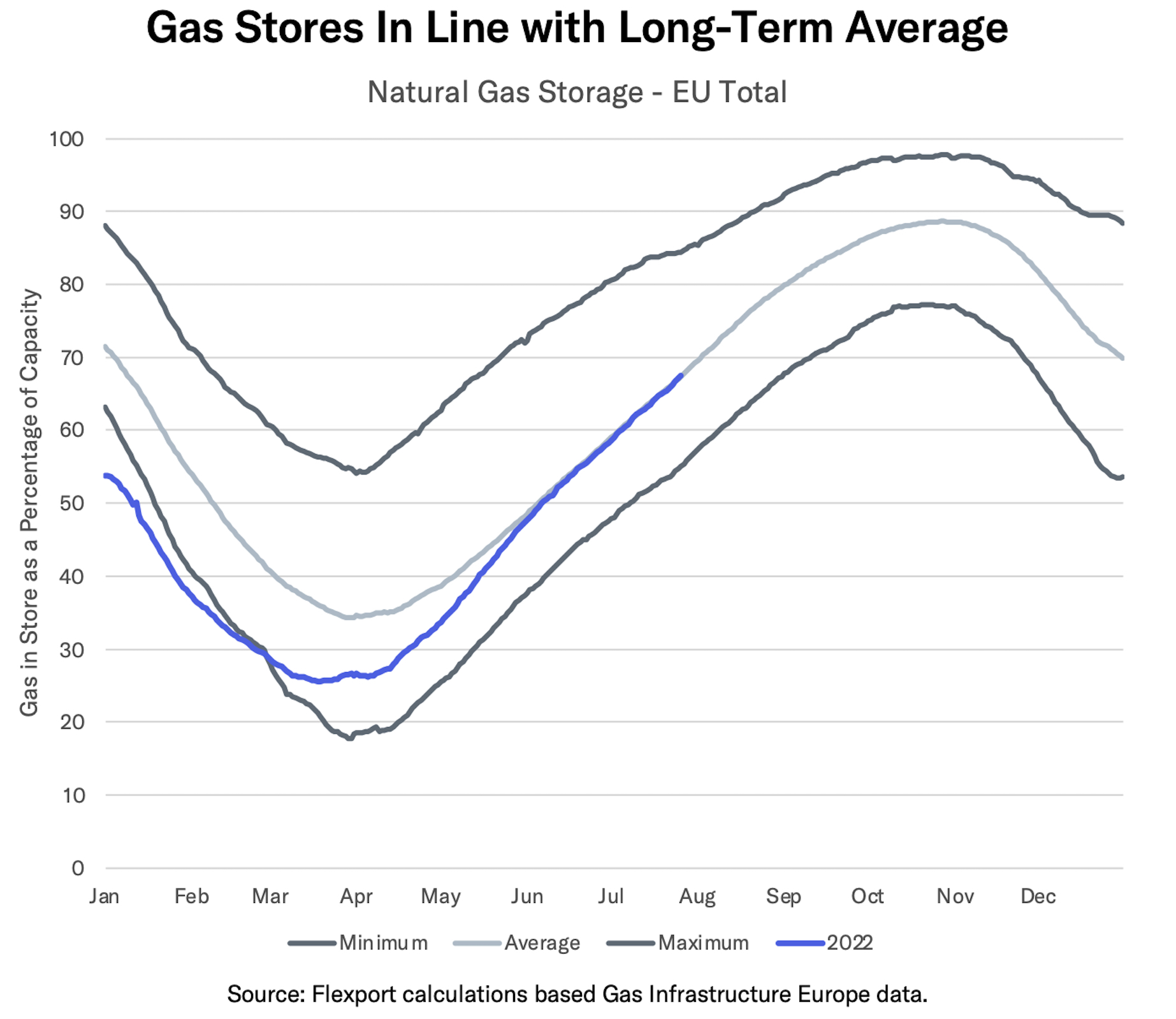 All manufactured goods supply chains start with raw materials and energy. In new research this week we look at the state of prices for energy, food and base metals. For the EU the biggest preoccupation currently is with natural gas availability and prices after Russia cut gas flows through the Nordstream 1 pipeline to 20% of capacity, citing turbine issues.

The EU is trying to tackle a potential winter shortage with a 15% mandatory cut to usage for the August to March period to offset a potential shortfall in the winter months. The industry coverage is uncertain and will depend on whether there is enough gas in storage. At least one major petrochemical producer is already trimming manufacturing.

The chart above shows the state of storage (stored gas a percent of capacity) for the EU as a whole in 2022 (blue line) versus history (gray lines). As of July 27, 2022 stores are inline with historic averages at 67.5%. Yet, that is still a long way from the 88.6% historic peak reached at the end of October each year to make sure there’s enough gas to last through the winter. A slowdown in the rate of storage refill could trigger gas supply restrictions for manufacturers later in the year.