In October, real US goods imports were up and exports were down. Both showed growth across comparable periods from 2021 to 2022. Benign, upward-trending trade numbers conceal a lot of turbulence in component categories, however. 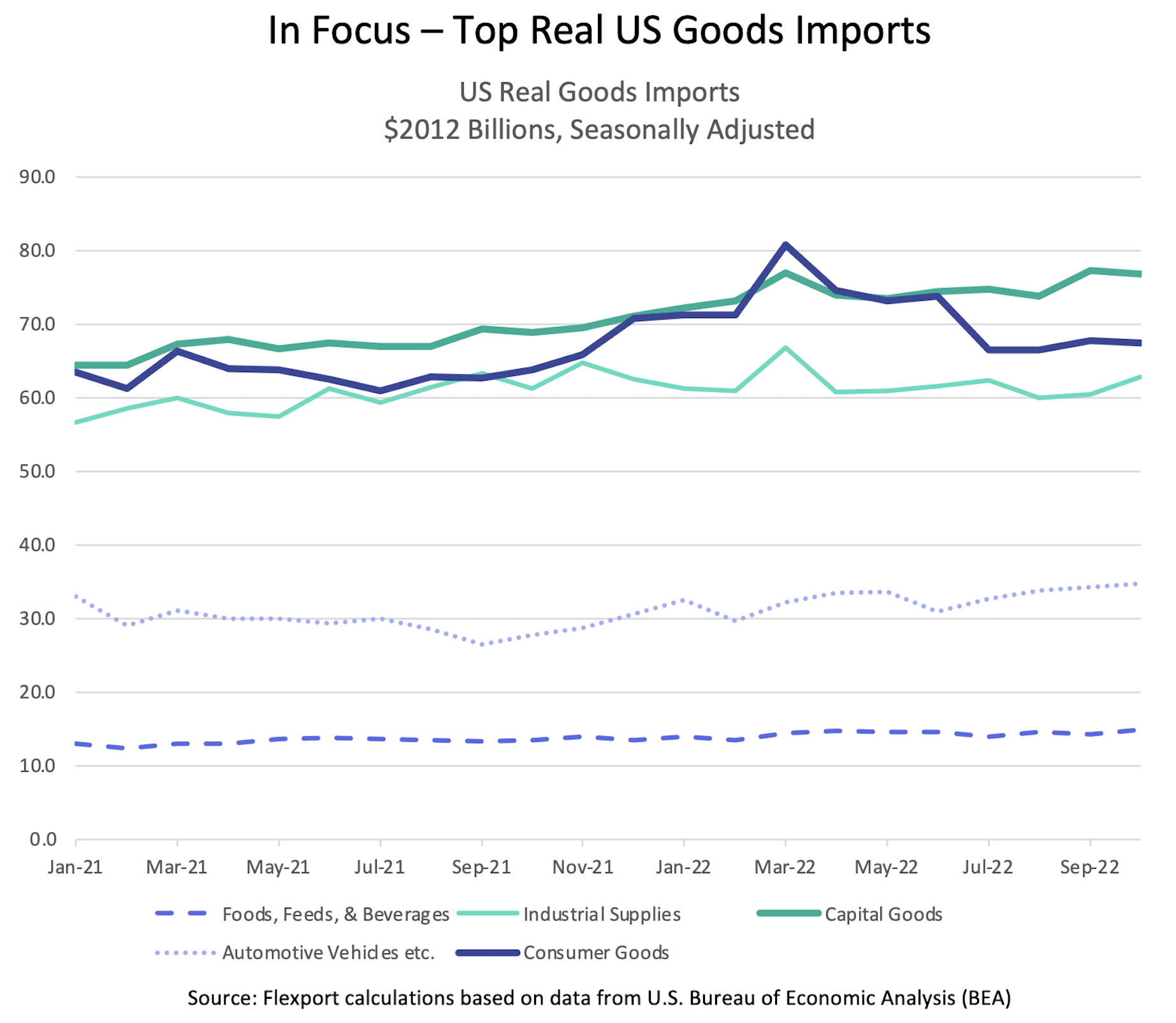 The latest US international trade numbers from the BEA showed that exports of goods fell from $162.4bn in September to $158.4bn in October, a drop of 2.5%. Imports of goods rose over the same period from $266.7bn to $271.0bn, an increase of 1.6%. All of these figures are on a real, seasonally-adjusted basis.

The chart shows how deceptive that year-to-date growth comparison can be. It shows real goods imports for five major component categories from January 2021 through October 2022. Imports in the Consumer Goods category peaked in March of 2022 at $80.8bn. From there they dropped to $66.5bn in July and August, a plunge of 17.7%, before a modest rebound. The drop was large enough to render Consumer Goods the 2nd biggest import category for this year, behind Capital Goods.

While Capital Goods saw its peak in September, the third largest category, Industrial Supplies, had a pattern similar to Consumer Goods—peaking in March, then dropping to August, followed by a slight rebound. Industrial Supplies include petroleum products, where the biggest changes often occur in categories such as natural gas, fuel oil, and ‘other petroleum products.’

The volatility of these two major categories drove the behavior of total real goods imports, which peaked at $285.8bn in March and bottomed at $261.4bn in August.

The pattern this year on exports, not shown, has been very different. Most category peaks were in August or September, with the exceptions of Automotive in July and Foods, Feeds, and Beverages in April. Real goods exports as a whole peaked in August, before dropping modestly in September and October.

Note that, as with many economic figures these days, the headline nominal numbers can tell a very different story from the inflation-adjusted (real) numbers. Year-to-date goods imports, without inflation adjustment, rose by 18.4%; exports by 20.3%. If one wants to look at how much pressure there is on ports or other parts of the supply chain, one definitely should prefer the real numbers.

So why are we seeing these differing patterns in imports and exports of goods? It’s an open question; no single reason leaps out. Remember that these figures are seasonally adjusted, so they defy easy explanation as cyclical trends, though seasonal adjustment has gotten particularly tricky after years of shocks through tariff imposition and pandemic effects.

In general, US imports are driven by the strength of the domestic economy, while exports are dependent on demand from abroad. This explanation is complicated, however, by swings in the value of the dollar. A broad index of real dollar strength showed an appreciation of 10.7% from January through October, followed by 1.8% in November.

So what comes next? Check out the forthcoming Flexport Trade Activity Forecast later this week.

The Flexport Ocean Timeliness Indicator for Transpacific Eastbound (TPEB) routes and Far East Westbound (FEWB) routes both dropped. TPEB dropped to 69 days from 74 days and the FEWB dropped to 75 days from 80 days. This notable improvement reflects the lessening of pressure along the supply chain.

Flexport’s annual, year-end "State of Trade" webinar on Tuesday, Dec. 13, will feature Co-CEO Ryan Petersen and Chief Economist Phil Levy as they consider the logistics and economic headlines of 2022 and look ahead to 2023.

Japanese GDP fell by 0.8% in Q3, a better result than the initial estimate of a 1.2% contraction. The improved estimate was driven by stronger exports.

In October, seasonally adjusted Euro Area retail trade figures fell by 1.8%. Compared with a year earlier, the calendar-adjusted figure was down by 2.7%.

The US Producer Price Index rose 7.4% for the year to November. PPI was up 0.3% for the month, representing a higher pace of inflation than October’s 0.2%. The pace was faster than expected, causing concern that inflation was not receding as quickly as hoped.

US Household Net Worth decreased for the third straight quarter in Q3, falling by 0.2%. The fall was smaller than that of Q2 and was driven by a decrease in the value of equities. Household debt grew by 6.3%.

The University of Michigan’s Consumer Sentiment Index rose by 4.0% from November to December, but remained 16.3% below December of 2021.

The World Trade Organization ruled that the United States’ national security justification for the Sec. 232 tariffs on steel and aluminum was illegitimate. The decision came across four different cases filed by China, Turkey, Norway, and Switzerland. The decisions hinged on language in Article XXI(b)(iii) which said national security exceptions to commitments could be claimed “in time of war or other emergency in international relations.”

The odds of a lame duck trade bill in the US seemed relatively slim. Sen. Finance Committee Member Ben Cardin (D-MD) said it was only likely to happen if it were attached to another legislative vehicle.

The deadline to avert a US government shutdown looms at the end of this week, when a stopgap funding bill expires.