Inflated Sense of Worth - Unpacking the U.S. Consumer Surge

The pandemic era brought with it an extraordinary set of economic conditions. The most salient aspect has been a dramatically-inflated surge in the demand for goods that placed unrelenting pressure on supply chains. For companies responding to these pressures, a critical question is when the economy might switch back to the status quo ante, if ever. As we see signs of the omicron wave abating, does that mean goods consumption demand will recede with it? In fact we are seeing some potential signs. In this note, we’ll review the nature of the demand surge in the United States, then look at some signals to watch that may indicate a turn.

First, let’s look at what we mean by an extraordinary surge in the demand for goods. Figure 1 shows the three components of Personal Consumption Expenditures: services, non-durable goods, and durable goods (the last defined as having an average life of at least three years). 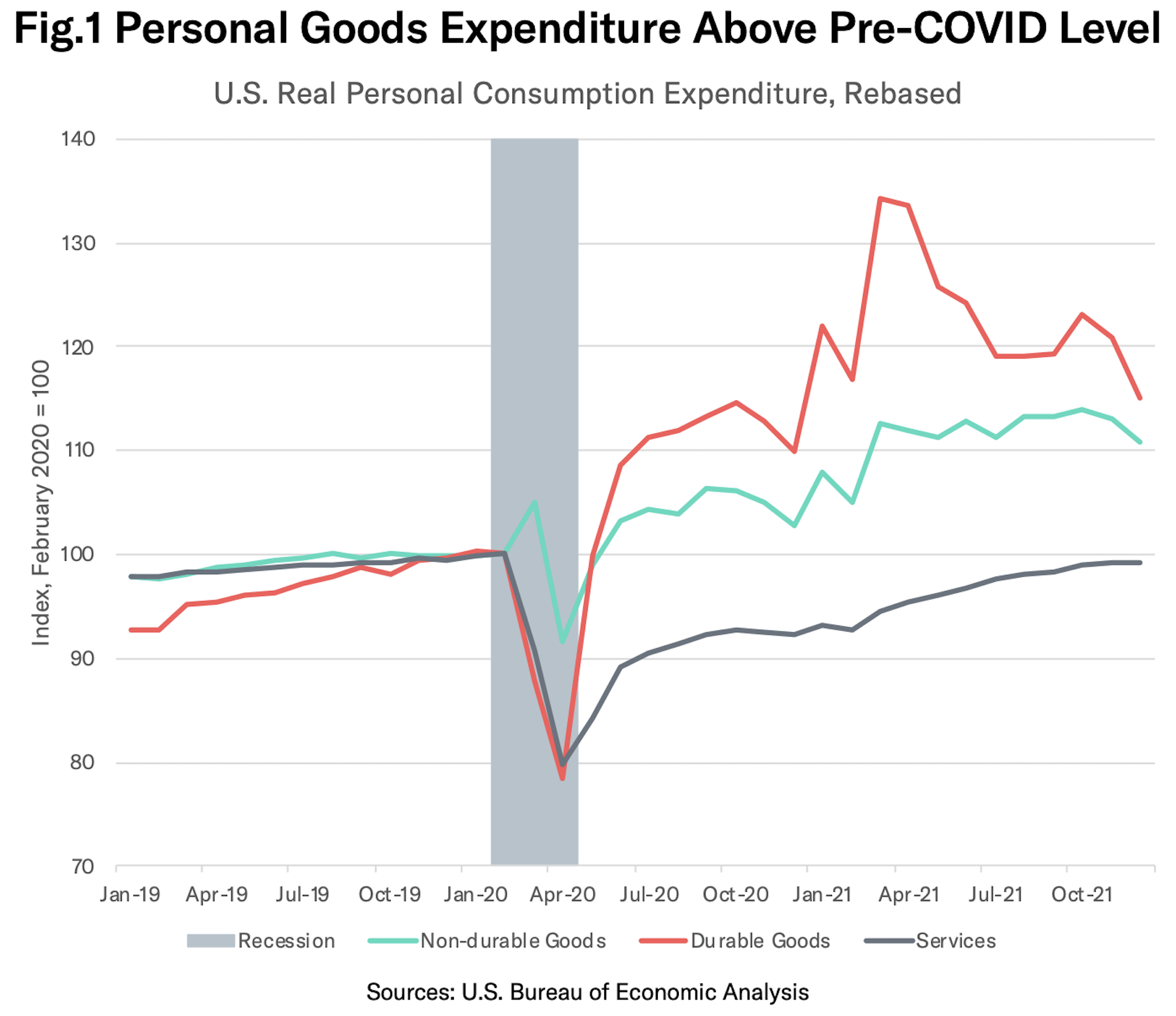 They are not equal shares of consumption. In pre-Covid times, one could roughly think of the standard consumption bundle as 70% services, 20% non-durables, and 10% durables. Those ratios, in fact, were remarkably constant. That’s why Figure 1 to the left of the recession bar is so dull; these things barely moved.

It is this heightened demand for goods that has strained supply chains and logistics systems.

These figures also provide pretty clear evidence on the question of whether the key problems have been demand pressures or supply chain failures.

If this were primarily a supply contraction, we would have expected the system to deliver fewer goods. Instead, it has delivered many more than it had pre-pandemic. That’s true of domestic production and of goods imports, which finished December 2021 nearly 20% higher than in February 2020. This was a demand expansion, not a supply contraction.

There are two big components that drive a consumer demand boom:

First: How much money do consumers have to spend?

Second: How much of that spending goes to goods vs. services?

Flexport has been tracking and forecasting the latter part of this process with the Post-Covid Indicator. As of our January 2022 forecast, that has not sent a signal of goods preference relenting.

However, in the course of our research, there have been two notable recent developments that, together, constitute a negative signal for ongoing goods consumption.

First, the December personal consumption numbers that the BEA released recently showed a surprise downturn in the goods share - below Flexport forecasts.

Second, that report also showed some unusual developments in prices, which have implications for how we interpret the numbers.

Let’s turn to prices next. 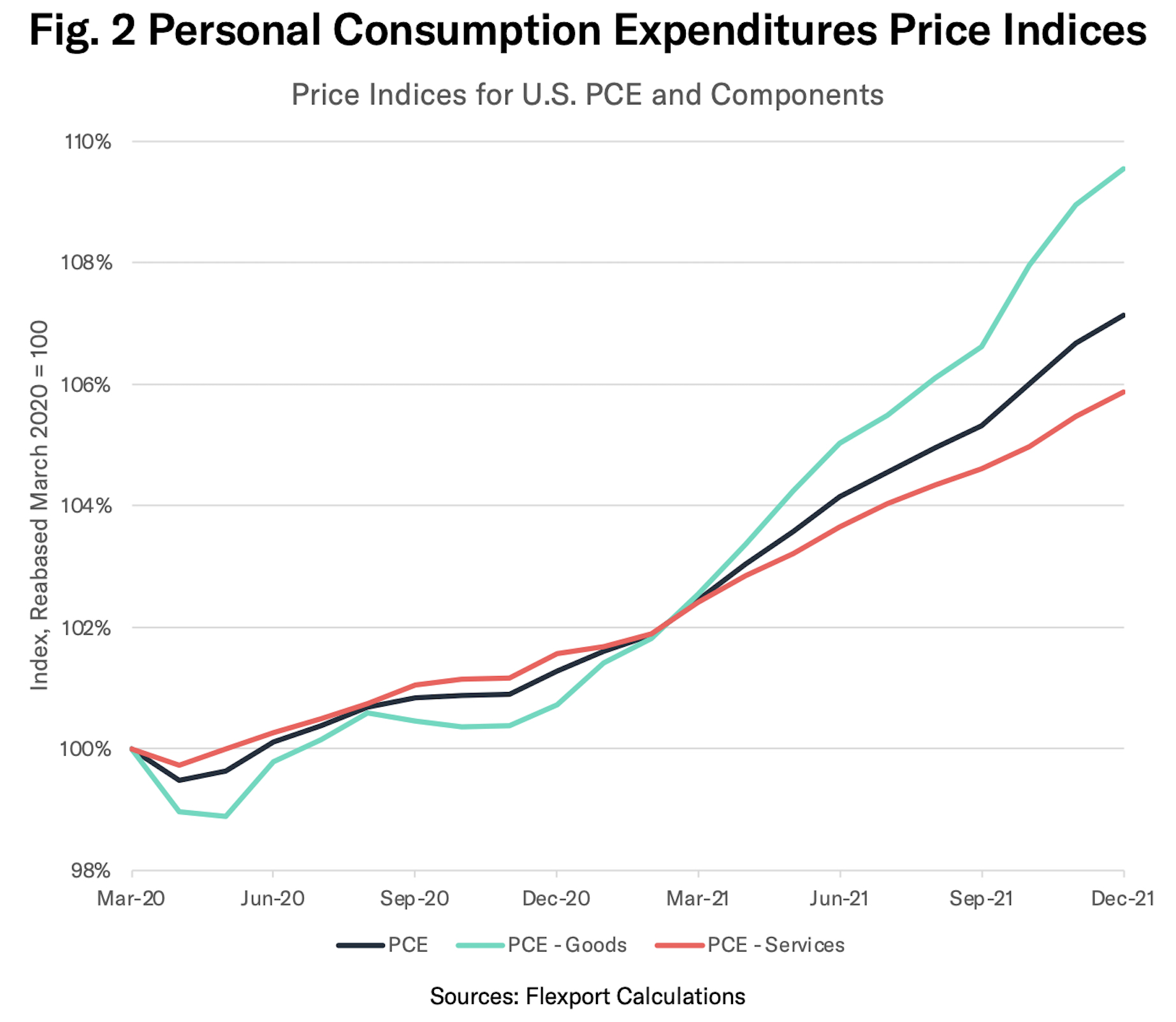 Figure 2 normalizes three different price indices to March 2020=100. All of them show significant price inflation, particularly in recent months. A key point to note, however, is the recent divergence between the indices. The PCE line is for goods and services combined, based on U.S. Bureau of Economic Analysis data.

If we’re just looking at nominal spending on goods as a fraction of total nominal spending, this won’t matter. If we’re interested in how many goods people are buying vs. total real consumption, this makes a difference, as shown in Figure 3. 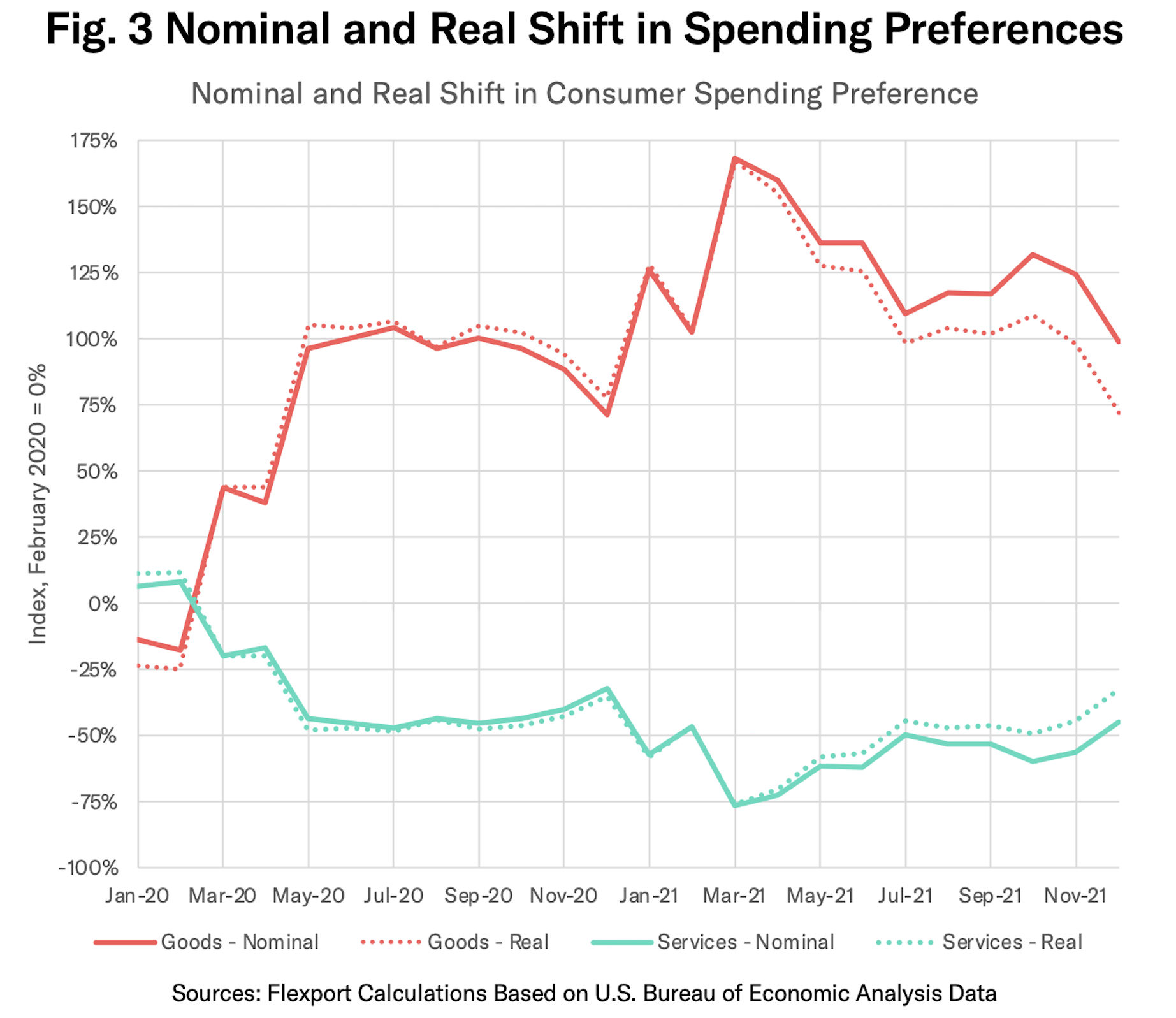 In Figure 3, the red lines track goods preferences relative to pre-pandemic norms, while the blue lines track services. The solid red line corresponds to our standard PCI estimate and ignores the differences in inflation rates. It shows the sharp drop from November to December 2021. The dotted red line uses the goods deflator from the earlier graph, and the drop looks substantially more severe.

Despite the severity of the drop, the goods preference is not at unprecedented levels for the pandemic era – we saw a similar drop in December 2020. At that time, it was just a pause before a further burst of consumption frenzy. Could that be the case again? To answer, we consider the role of government policy.

If we return to the first of the two stages of the consumer spending decision, we focus on how much money consumers have to spend. Fig. 4 learns the lesson of the previous section and makes sure to adjust for inflation, thus showing Real Disposable Personal Income (the blue line).

Note that it rose in the beginning of the pandemic (the vertical gray bar shows the recession), then coasted back down to a low in December 2020 before spiking again and peaking around March 2021. Note that the dates for the local low and high match those of the goods spending share in Figure 3 above. 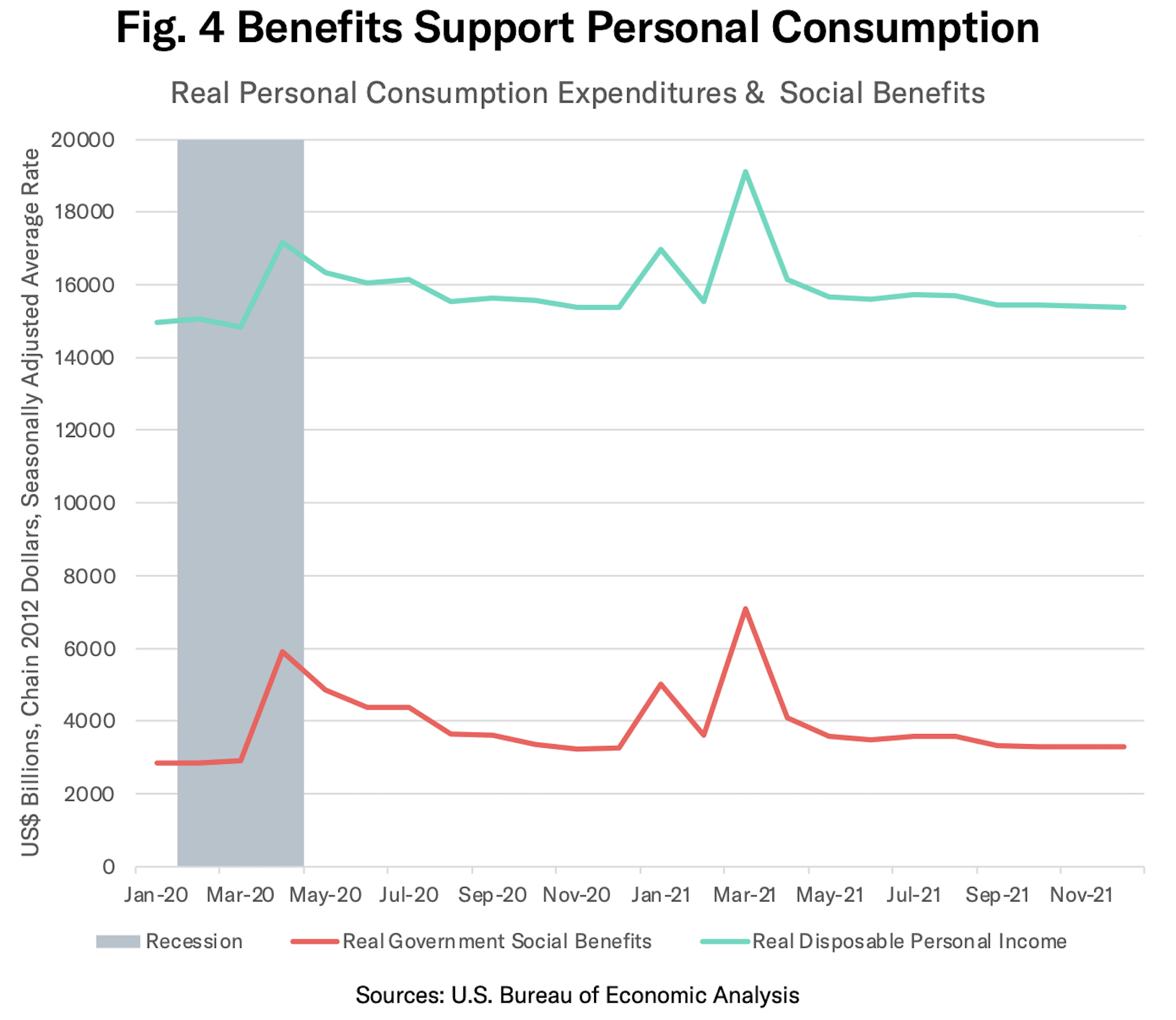 The red line in Figure 4 provides a pretty obvious explanation for what was driving this process. It shows government social benefits, capturing big programs like the CARES Act and the American Recovery Act. Those government transfers readily explain the movements in real disposable personal income.

Note, though, that since the spring of 2021, this boost to personal income has tapered off. While it is possible that there could be new assistance, an impasse in Washington and looming midterm elections make a major new stimulus unlikely.

In addition to fiscal policy, there’s monetary policy. In Figure 5 we focus on the Fed’s main policy tool, the Fed Funds Rate. Again, we adjust for inflation. That’s why it goes down, even as the nominal Fed Funds Rate has remained stuck at zero.

In this case, we take the most conservative (lowest) measure of inflation available – the Trimmed-Mean PCE Deflator preferred by the Fed. If we subtract this inflation rate from the Fed Funds rate, we get a measure of the real Fed Funds rate. 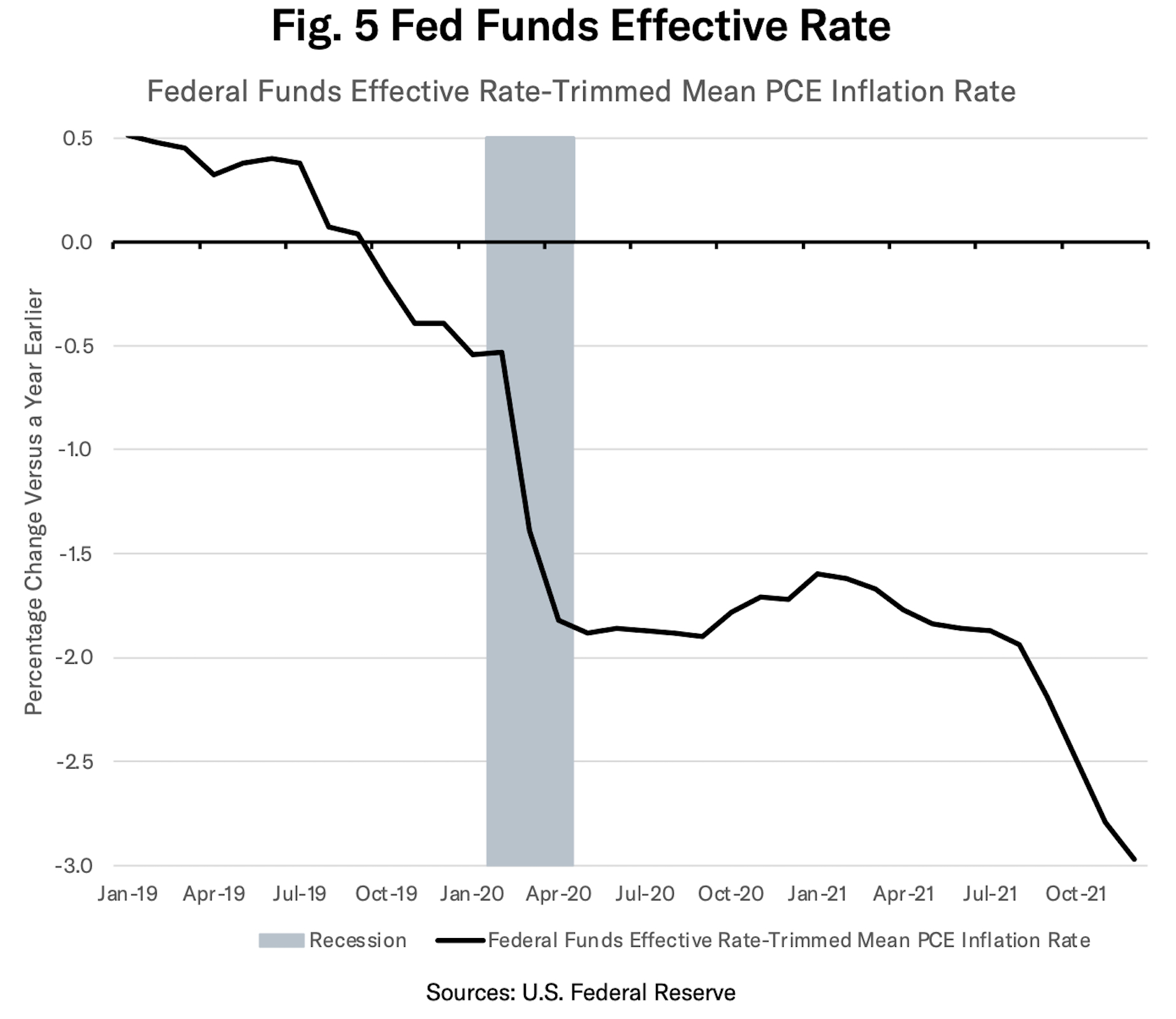 Unlike the fiscal policy chart, this unambiguously shows continuing stimulus. So how can that depress consumer demand?

The Fed has recently made very clear that it now sees inflation as a continuing problem and one that it is committed to address. Figure 5 shows how far the Fed is from a neutral policy, much less one that is likely to bring inflation down.

Even if inflation were not to accelerate further, the Fed would need to raise over 300 basis points (3 percentage points) just to get to neutral – a substantially larger increase than markets are anticipating in the near future. The higher inflation gets the greater the increase that is needed.

For lenders who are forward-looking, as in longer-term government bond markets and mortgage lending markets, this would call for interest rate hikes sooner rather than later. When rates go up for buying houses or cars, purchases become more expensive and consumers become discouraged.

This is early trend-spotting. The share of goods in personal consumption is still elevated. We’ve seen dips before followed by resurgence. Congress could still send out more money. The Fed could be slow to act. But mounting evidence suggests that the consumer goods spending party may be winding down.

Note that this could still leave pressure on logistics. Even without new interruptions, it would take time to work off backlogs before peak season arrives. There are also continuing concerns about factors such as West Coast labor negotiations. But for any given level of supply disruption, lower demand would ease pressure on beleaguered supply chains.