Is the recovery in logistics networks proceeding evenly around the world? There are signs that the disruptions to supply chains over the past two years are improving. Yet, data from Flexport’s Ocean Timeliness Indicator shows uneven progress in Asia-Europe vs. Asia-North America routes. Reasons could include: the impact of strike action, resource allocation by shipping firms, or simply a return to old-normal conditions. Yet, it’s worth questioning whether there is such a thing as normal for logistics networks.

Flexport’s Ocean Timeliness Indicator provides a guide to the time taken for ocean freight shipments from their cargo-ready date in Asia to when they leave their destination port in North America (TPEB) or Europe (FEWB). 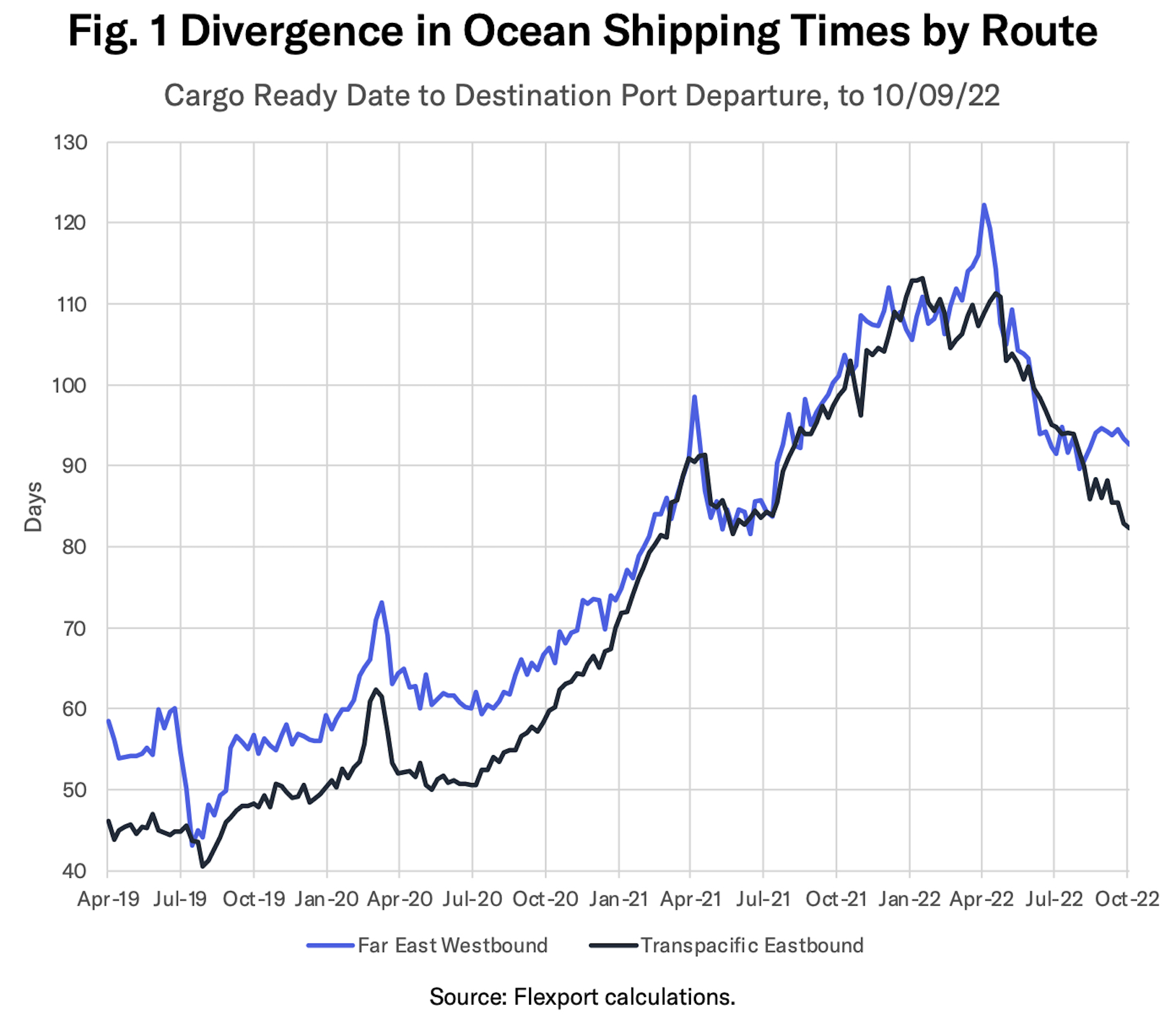 For both routes, the OTI has fallen steadily since the most recent peak in April, as shown in Figure 1. As of mid-August 2022, both measures were at 90 days. Since then TPEB has continued to fall, reaching 82 days as of October. That marked the lowest since May 2021. FEWB has stabilized at 93 days, inline with the average since mid June 2022.

So, what has driven the divergent performance? The logistics network in Europe has proven susceptible to strikes during fall 2022, including at ports in the U.K. and Germany as well as widespread railway strikes. Those may have delayed the last stage of the shipping process. The U.S. by contrast has avoided rail and port strikes.

Another factor may be the wider range of debottlenecking options available to container lines operating into the U.S. versus Europe. 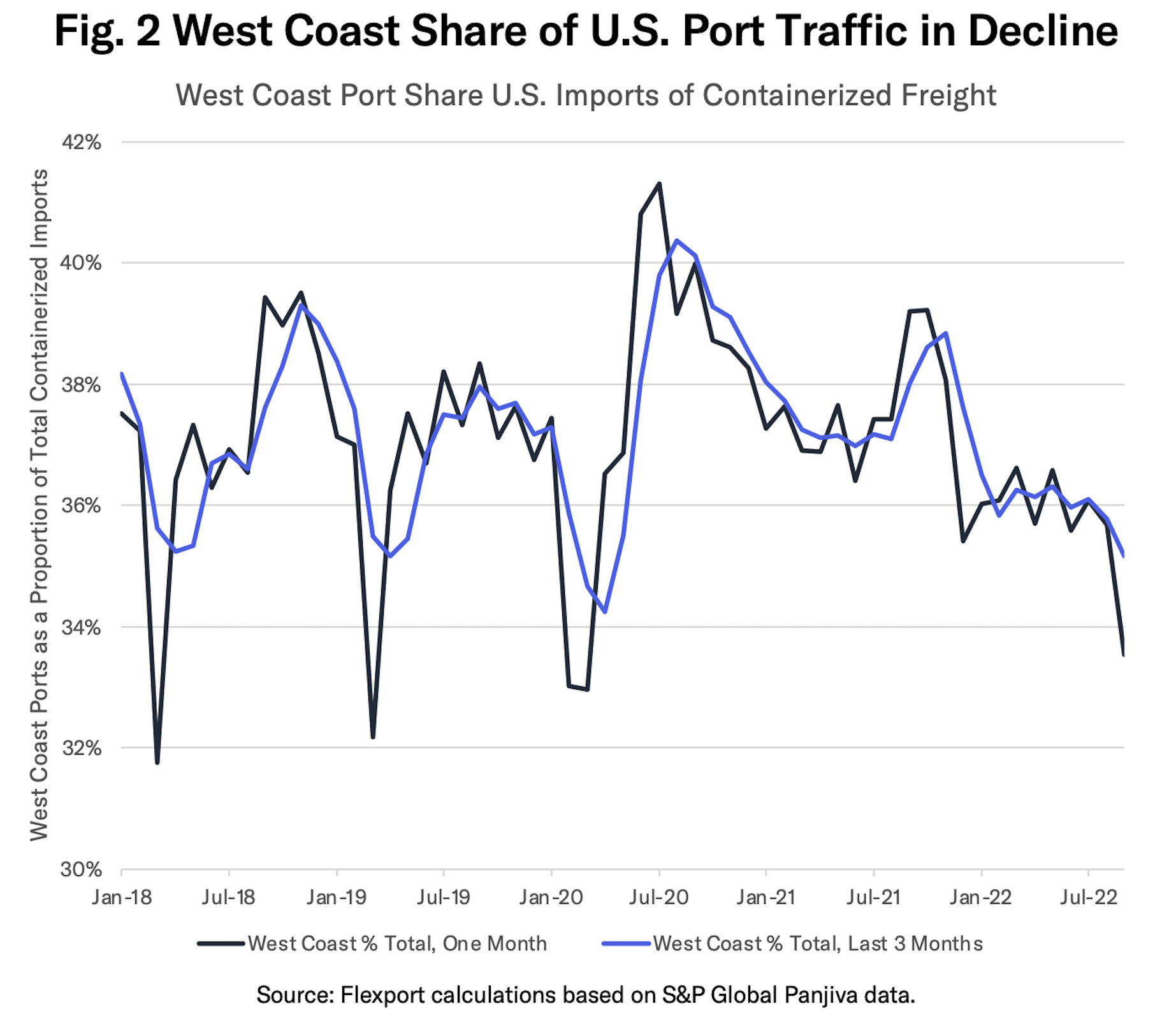 A major driver of the original U.S. logistics congestion came from shipments of consumer goods to the west coast. As discussed in previous research, diversions to the east coast appear to have provided effective alternative route options.

Figure 2 shows the proportion of U.S. seaborne, containerized imports that arrive into west coast ports. In the month of September 2022, they dropped to 33.5%, the lowest since March 2020. When seen on a three-month trailing average basis — to avoid short-term issues such as storms and the timing of COVID-19 lockdowns in Asia – the ratio fell to 35.2% from a recent peak of 40.4% in August 2020.

There has not been the same degree of “north-south” alternative route switching in Europe. Additionally, Europe has lost route options due to reduced Asia-Europe rail services linked to the Ukraine conflict. Extreme heat and low precipitation in Europe over the summer also disrupted logistics networks, including river barge shipments, which may have caused delays at ports. 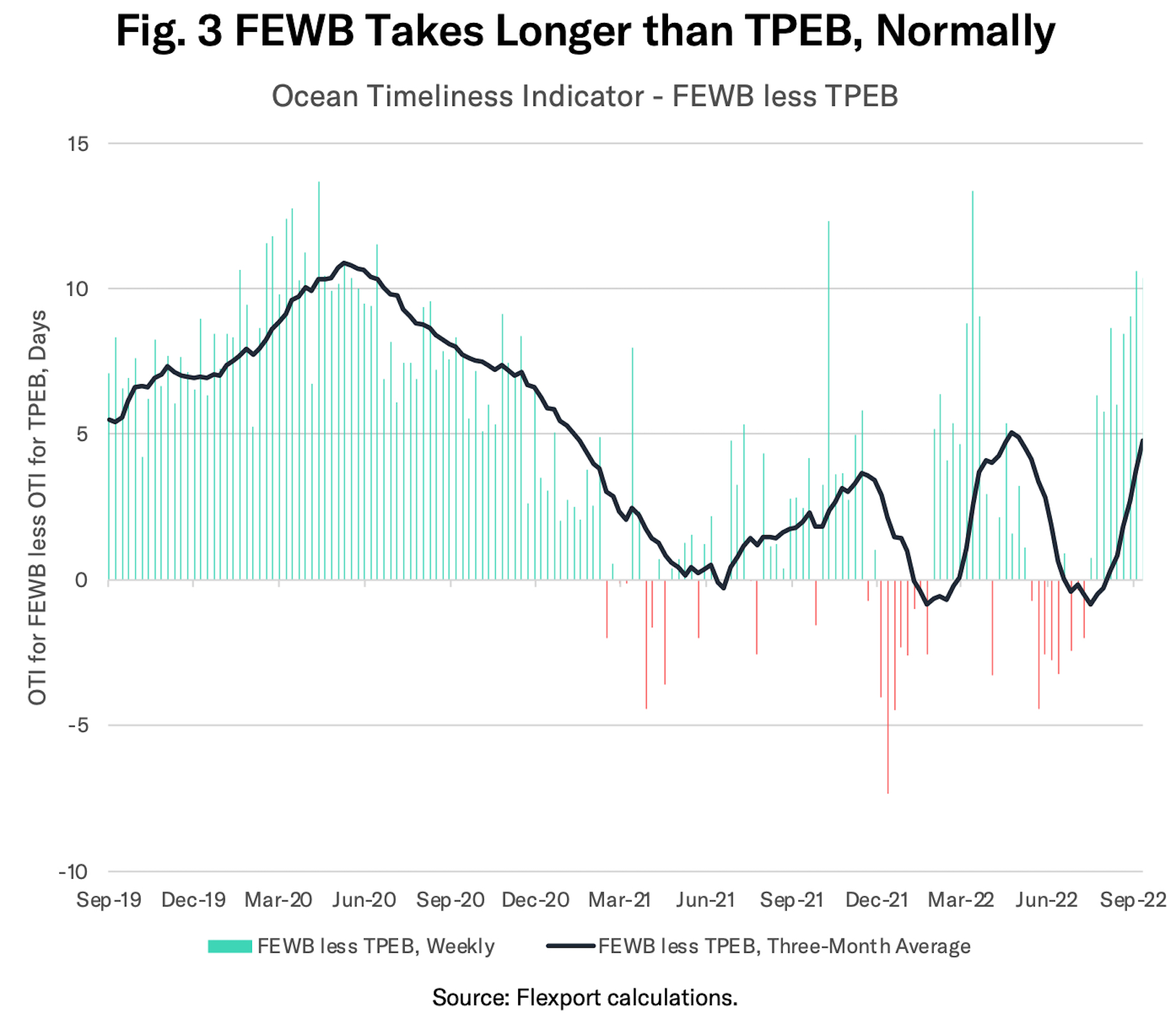 The geography of shipping from Asia also means routes to North America should be quicker than those to Europe. The black line in Figure 3 shows the difference between the OTI for TPEB and FEWB on a three-month average basis. In Q3’19, TPEB was six days quicker than FEWB. In Q3’22, TPEB was three days quicker, after being three days slower in Q2’22. The bars in Figure 3 show weekly data. As of the second week of October 2022, the difference was 10 days in TPEB’s favor.

So are we back to the “old normal”? First, we are nowhere near the “old normal” for the OTI on FEWB or TPEB lanes, which averaged 60 days and 50 days respectively in October 2019. In the short-term, U.S. logistics networks are still exposed to risks including: inland logistics congestion; the remainder of the hurricane season; the risk of a west-coast port strike and uncertainty around whether all unions will accept a recent rail agreement.

Second, caution is also always needed in judging normality in a seasonal business. There are seasonal peaks and troughs in activity surrounding holidays, such as the Lunar New Year and Golden Week in Asia, and peak shipping season for holiday sales in Europe and North America.

Finally, it’s worth bearing in mind that logistics networks have been beset by significant disruptions in most years. Those include:

Perhaps it would be better to talk of a “never normal” for logistics networks.

In conclusion: Flexport’s Ocean Timeliness Indicator shows uneven progress in the improvement in shipping times on different lanes. Strike action and carrier decisions are potential reasons, as is a return to “old normal” timeliness. It could take until well into 2023 for final patterns to emerge, if at all.

Ocean shipping timeliness continues to improve on TPEB lanes, but has stalled for FEWB.

Europe has been more prone to strikes, though we may simply be seeing a historic pattern re-establish itself.

While 2022 already looks different to 2021, it’s worth questioning whether there is such a thing as a normal year for logistics networks.