The pandemic era has seen wild swings in US personal savings, with the rate hitting its lowest in over a decade in April. The accumulated savings during the pandemic have allowed consumption to remain strong, even as income growth has faltered. Most recently, there has been a split between stronger durables and weaker non-durables consumption.

In Focus - Transfers, For The Save 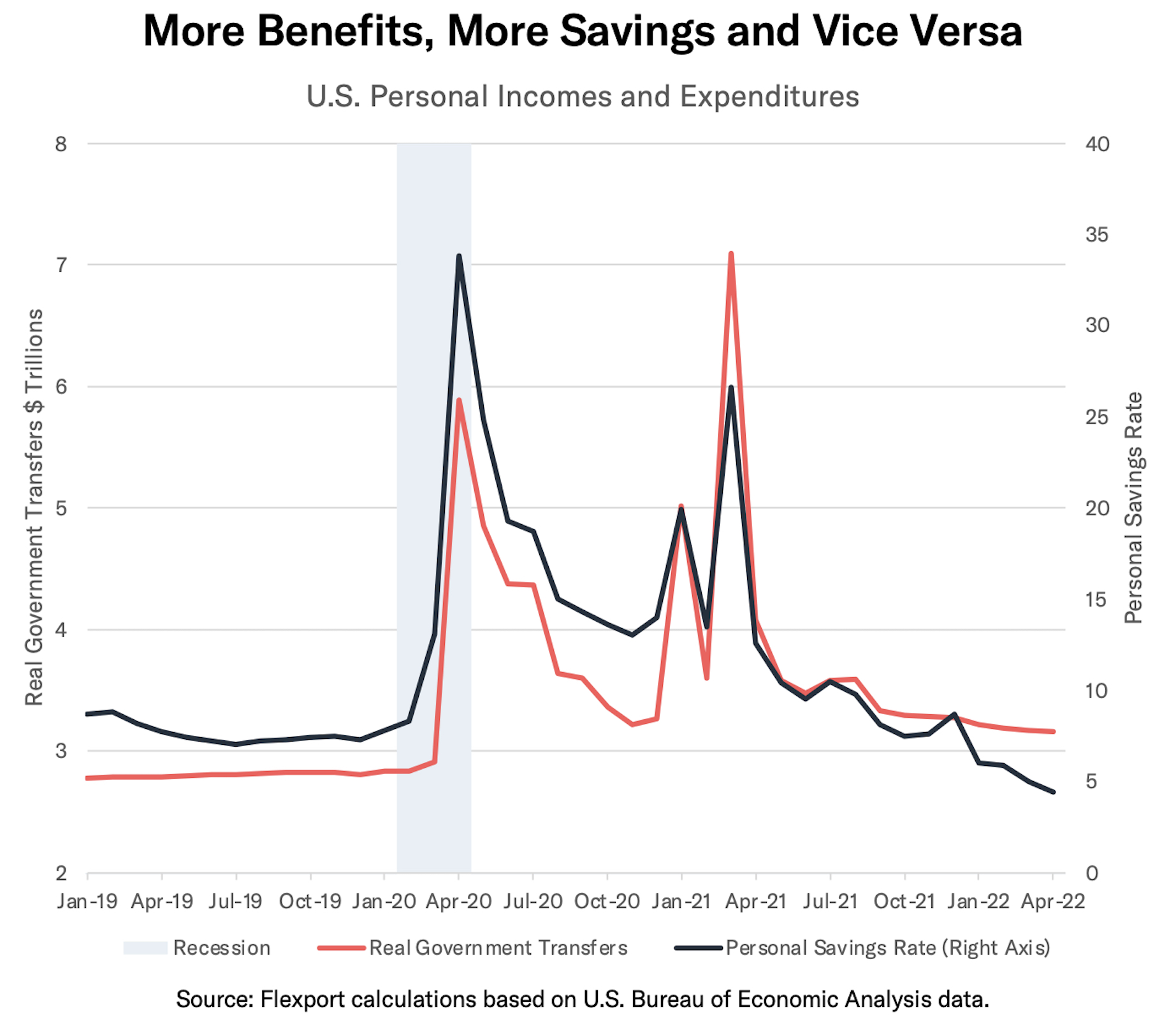 It is hardly daring to say that economic behavior under the pandemic has been unusual. The challenge has been to quantify and, if possible, explain. The dark line in the chart shows the U.S. personal savings rate and uses the scale on the right (percentage). In the 20 years leading up to February 2020, the median monthly value was 6.2% and the rate ranged between 2.1% (in mid-2005) and 11.6% (end 2012). Mostly, changes were gradual and unexciting, as they appear in the beginning of this chart.

This is not just of academic interest. If we want to understand how much consumers will spend on goods, we can break the question down into three parts:

The Bureau of Economic Analysis this week just put out new data for April that sheds light on each part of this sequence. We can start with the savings behavior we described above. The chart shows a bizarre, if suggestive, correlation.

Oddly enough, it’s between a percentage rate (right scale, navy line) and the real level of “government social benefits to persons” (left scale, $2012 trillions). The more money the US government pushed at consumers, the more they saved. This makes some sense from an economic standpoint – people try to “smooth” consumption, rather than going from feast to famine.

Economists usually apply this concept across a lifetime, so people spend more than they earn while students or retirees, and less than they earn during their prime working years. It was a substantially trickier proposition during the pandemic, when there was no certainty about how long the unusual stretch would last.

The buildup of savings meant there could be a month like April, when real disposable personal (DPI) income stayed flat, but real personal consumption expenditures (PCE) rose 0.7%. Looking back over the last six months, real DPI fell by 1.8% while real PCE rose by 1.2%. At some point, either incomes will pick up or consumption will slow.

In other research we published two reports on conditions and strategies in the apparel sector. We’ve also taken a look at four strategies for dealing with the weak U.K. consumer economy.

Along with income and consumption information, the Bureau of Economic Analyses released a key inflation gauge. The PCE Deflator showed annual inflation at a 6.3% rate in April, down from 6.6% reported in March.

U.S. international merchandise trade activity fell by 8.3% sequentially in April. A drop in commodity prices dragged industrial imports and exports down by 14.2% and 11.1% respectively. A 12.2% slide in consumer goods imports may reflect a wider slowdown, though on a year over year basis imports were still up by 14.3%.

The value of U.S. retail inventories fell by 0.7% in April compared to March. That marked the first decline since September 2021 and came as sales rose by 0.9%. While automotive inventories improved, retail store and non-store (e-commerce) inventories dropped by 1.6%.

U.S. new home sales dropped 16.6% from March to April and were down 26.9% from April of 2021. This coincided with rising mortgage rates and, along with existing home sales, can presage a slowdown in purchases of home furnishings.

The University of Michigan consumer sentiment final reading for May hit its lowest level in over 10 years.

Purchasing managers’ sentiment in China rebounded in May with the official CFLP survey recovering to 49.6 from 47.4 in April, suggesting improving business conditions following factory closures. From a trade perspective both export and import expectations increased though both were still below March’s levels.

The World Trade Organization’s measure of global exports of intermediate goods - a measure of supply chain activity rather than final consumption - grew by 21.5% year over year in Q4’21 and by 32.2% compared to Q4’19. Trade in electronic components led the way while the automotive sector lagged.

The Biden administration has begun discussions with partner countries for implementing its Indo-Pacific Economic Framework. The IPEF will focus on a series of “small-wins” in four major areas of trade rather than being an overarching deal. Not all countries will take part in all elements though commitments will be legally binding.

The U.S. is also still in the process of reviewing its Section 301 tariffs on imports from China, with President Biden stating “they were imposed by the last administration, and they’re under consideration.” The tariffs have to be formally reviewed before July.

The U.K. is continuing to expand its range of trade deal negotiations in the wake of Brexit. Talks with Mexico have started this week while a series of limited areas of cooperation with U.S. states has started with Indiana. That follows a return in jurisdiction over new deals to Parliament from Number 10.

The European Commission has outlined contingency plans in the event that all Russian gas supplies become unavailable. That would include maximizing storage ahead of the winter but may also require rationing. So far the EU has launched sanctions against Russian coal and oil but not natural gas.

The Russian government has reportedly offered to reopen shipping lanes for food exports. That comes with the condition, however, that sanctions against the country are removed. The U.S. government appears unwilling to accede to the plan.

Elevated food prices have led to a round of protectionism export restrictions. India has already limited wheat exports and is also considering similar actions for sugar. The country is also cutting import duties in order to reduce food price inflation.

Chart of the Week - Running Low on Fuel 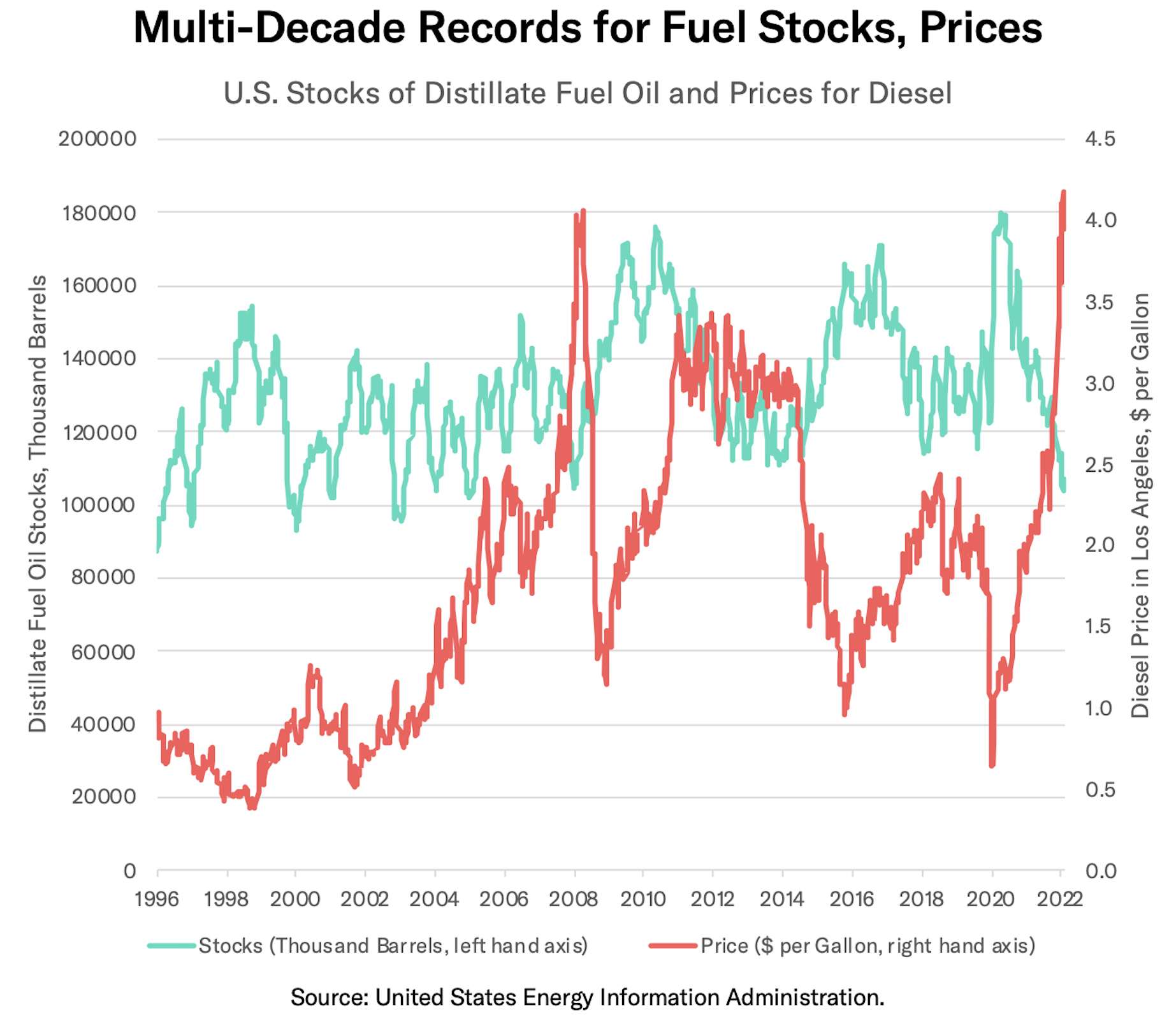 Rising diesel prices, in part due to elevated oil prices linked to the Ukraine conflict, have driven inflation across supply chains due to higher costs for trucking. Diesel fuel prices in the U.S. remain close to their highest since the EIA started collecting data in 1996 as shown in the chart above.

There’s also an emerging shortage of diesel in the U.S. While somewhat seasonal, U.S. stocks of distillate fuel oil reached their lowest since May 2003 in the week to May 6, 2022 and remain close to that level. That has led the Biden administration to consider a release from emergency fuel reserves, on top of reported plans to restrict exports of crude oil.

There are already signs of a knock-on effect for the trucking industry. A survey of truckers indicates that high fuel prices are pushing participants out of the market while the American Trucking Association reported a 2% fall in truck tonnage in April.