By multiple measures, the U.S. labor market looks about as strong as it has for twenty years. A key question is whether that will spur even more inflation. If so, the May jobs report did not pick that up. 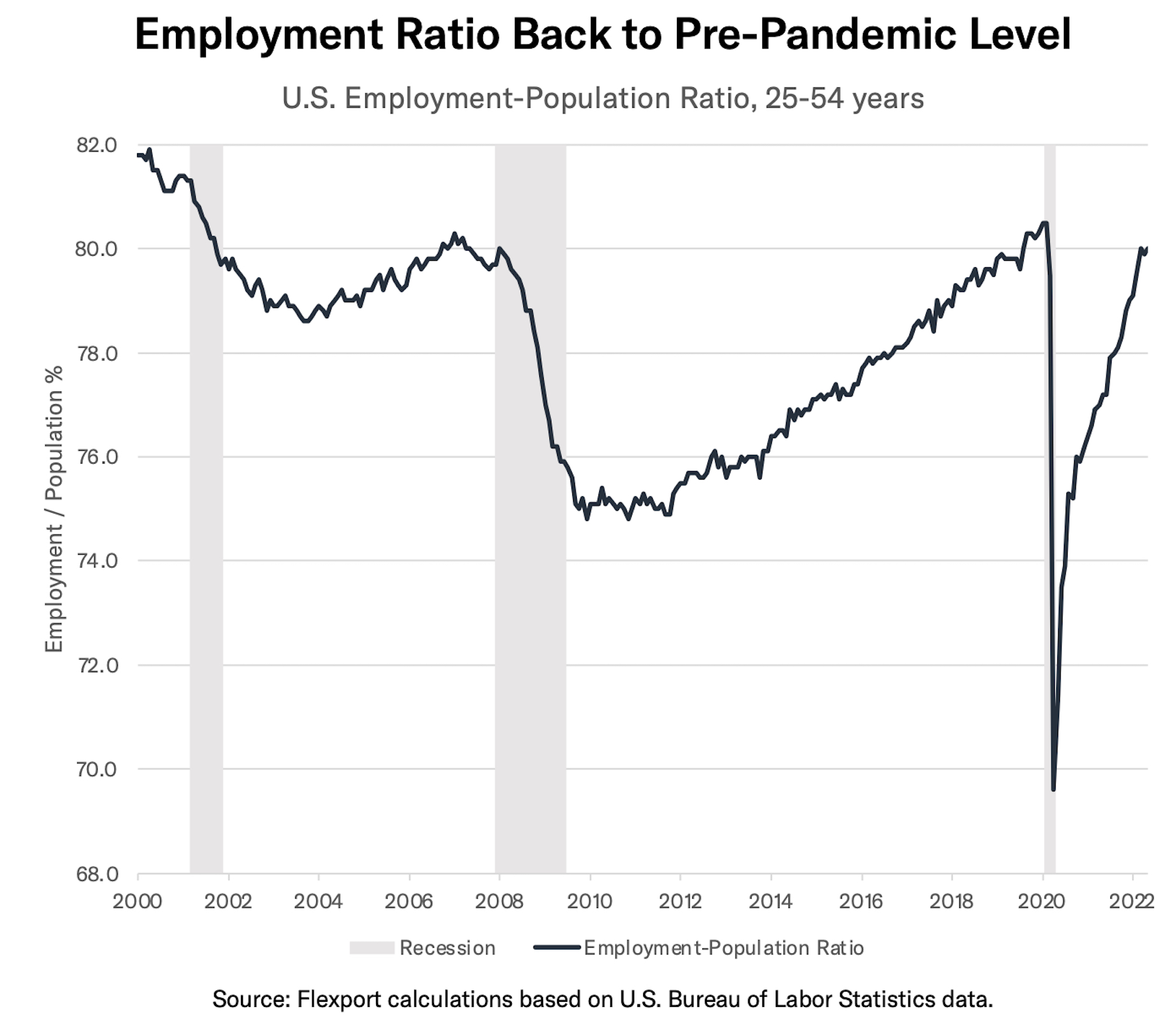 The U.S. job market is hot. That was the message in the continued high number of job openings per unemployed person – at 2.2, the number was the highest in twenty years. The message was also there in the May headline employment numbers: 390K new jobs and an unemployment rate continuing at 3.6%.

The increases in May jobs were fairly wide-ranging across sectors, with an interesting exception in retail trade, where there were 61K fewer jobs than in April, but still 159K more than February 2020.

One persistent question about the job market is when we “recover” the jobs lost in the last recession. A sequential, month-over-month improvement is nice, but when will the labor market have gotten back?

There are at least three problems with this question.

If we look at the recession of 2007-2009, the pre-recession low unemployment rate was 4.4% in March 2007. The economy next got back down to that level in March 2017, a decade later. Patience required. Further, the rate kept dropping for almost three more years, hitting 3.5% in February 2020. So, no set level.

Two of the biggest factors explaining shifts over time are demographics – people aging out of the workforce – and labor force participation – people deciding not to look for jobs.

The chart above side steps both of these. It tackles demographics by looking at the 25-54 age group. It also handles labor force participation decisions by asking about the ratio of employed people to the entire population. At 80.0, the May number tied its recent peak from March, and is right near the highest values of the last 20 years.

One can also see from the chart that these levels were re-achieved in extraordinary quick fashion after the pandemic recession. That’s good news for those seeking jobs, but raises concern about overheating and inflation. The standard cautionary tale in economics is that an overheated job market will lead to rapidly rising wages and, in turn, to escalating inflation.

Some analysts took solace from the average hourly earnings number in the report – up 5.2% from May 2021.

Is that good or bad? It is notably higher than the 2% inflation rate targeted by the Fed. Since November, it has been tracking right between the higher and lower estimates of inflation. Since October, that rate of annual increase in hourly earnings has held fairly steady. It is nonetheless hard to see how that will stay true with a labor market this tight.

In other research we took a deep-dive into the European Union’s Carbon Border Adjustment Mechanism. The first report looked at the genesis and key characteristics of the program, which is designed to level the playing field in greenhouse gas emission permit payments for EU-based manufacturers. The second looked at the corporate strategies and way ahead.

Euro Area unemployment held steady at 6.8% in April. This was unchanged from March, but down from 8.2% in April 2021. The current figure is the lowest since at least 2008. There was substantial variation among major European economies, with Germany, 3.0%, and the Netherlands, 3.2%, at the low end; Spain was at the high end with 13.3%.

South Korea’s exports grew by 21% year over year in May. That was faster than expected though when adjusting for the two extra working days this year the expansion was 10% - the slowest rate since Jan. 2021.

Amidst talk of impending economic hurricanes and typhoons, there was some question whether the U.S. Federal Reserve might be tempted to pause after its expected summer rate increases. But Fed Vice Chair Lael Brainard poured cold water on the idea, saying the Fed had a lot of work to do to get inflation down to the 2% target.

While the Biden Administration has shown no enthusiasm for conventional trade agreements, it has been rolling out a series of unconventional trade deals. After the earlier launch of the Indo-Pacific Economic Framework, this week saw an amendment to the U.S.-Japan beef safeguard mechanism and a new trade initiative with Taiwan.

The U.S. Trade Representative has extended exemptions for medical products from Section 301 duties on imports from China. That’s likely to represent a technical measure - the prior exemption had timed out - rather than necessarily being a sign that wider exemptions are off the table.

The EU reached a compromise on a partial ban on imports of Russian oil. Just imports by sea will be formally covered, though Germany and others have voluntarily cut pipeline oil purchases too, bringing the total to 90% of Russian oil shipments to Europe being blocked. The action allows a wider sanctions package to be put in place.

U.S. auto sales fell by 12.1% sequentially in April on a seasonally adjusted basis. While availability may be historically low due to parts shortages that may also be a sign of a squeeze on consumer spending. Sales of 1.09 million vehicles was the second lowest since the pandemic-suppressed sales of May 2020.

The Japanese automakers continue to struggle with parts availability, shown by recent announcements of production halts. Global production by the seven fell by 27% sequentially in April and by 22% year over year based on company financial figures.

Chart of the Week 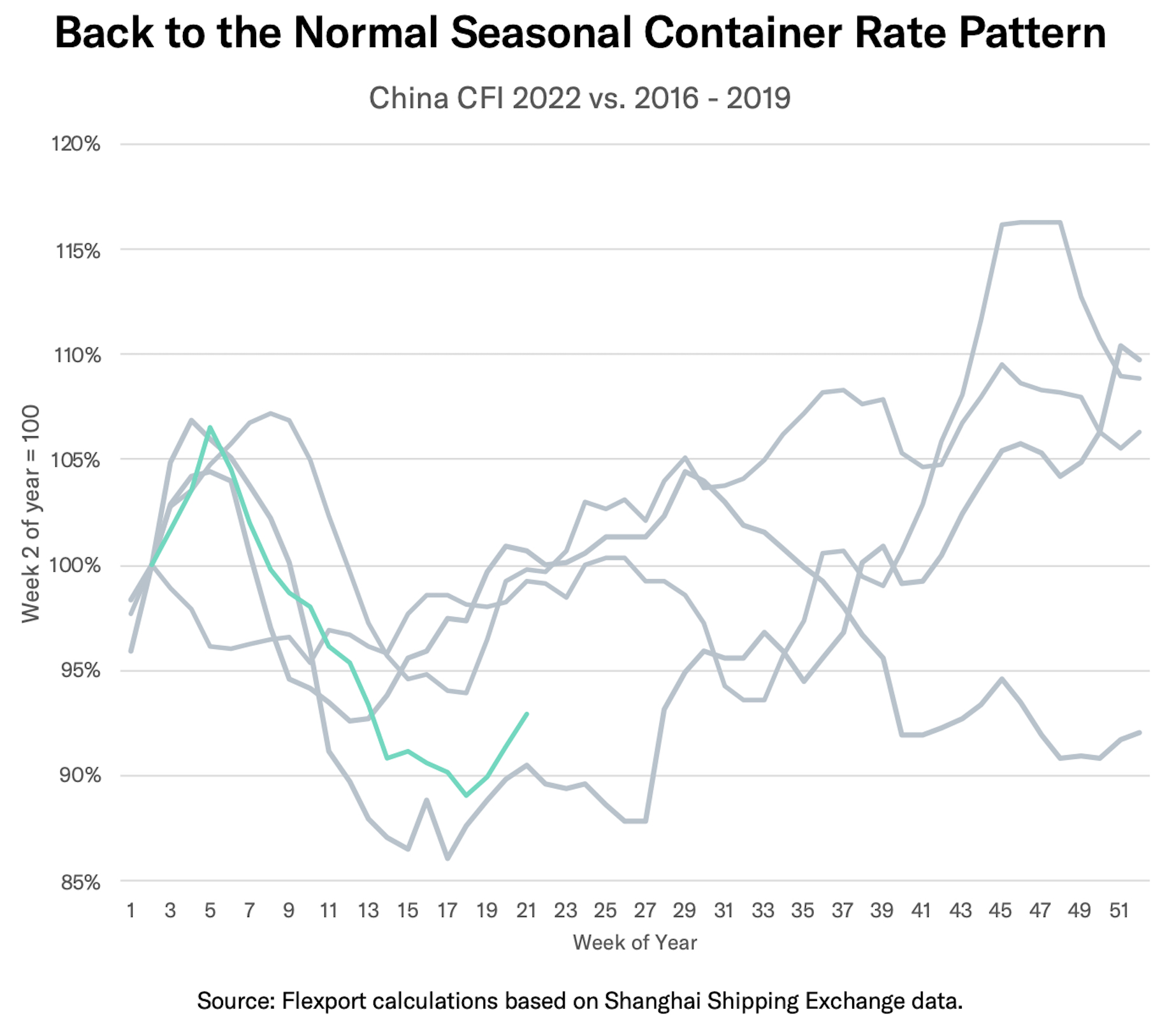 Container shipping rates have increased during May after a protracted downturn since mid-February. Does this mean the freight industry is now expecting a tightening of conditions between demand for services and available capacity? Not necessarily. The chart above shows the Shanghai Shipping Exchange’s China Containerized Freight Index, which provides a spot price for shipments from all Chinese ports to all destinations.

When compared to the pre-pandemic period there is a clear downturn every year from 2016 - 2019 running from mid-February (shortly after the lunar new year) to mid- to late-May. The downturn period comes at the same time as the seasonal lull in shipping volumes, with the upturn heading into June and July coinciding with a pickup in volumes for peak season.

Yet, there’s arguably no such thing as a “normal” year. In 2016 the shipping industry was struggling with overcapacity.