The big news of the week was the U.S. Federal Reserve’s decision to hike the Fed Funds rate by 75 basis points. The transmission mechanism by which this hits the broader economy tends to be longer-duration bond rates, which have risen dramatically. The effect on the economy will depend a great deal on people’s expectations for inflation.

In Focus - Interest Rates: All rise! 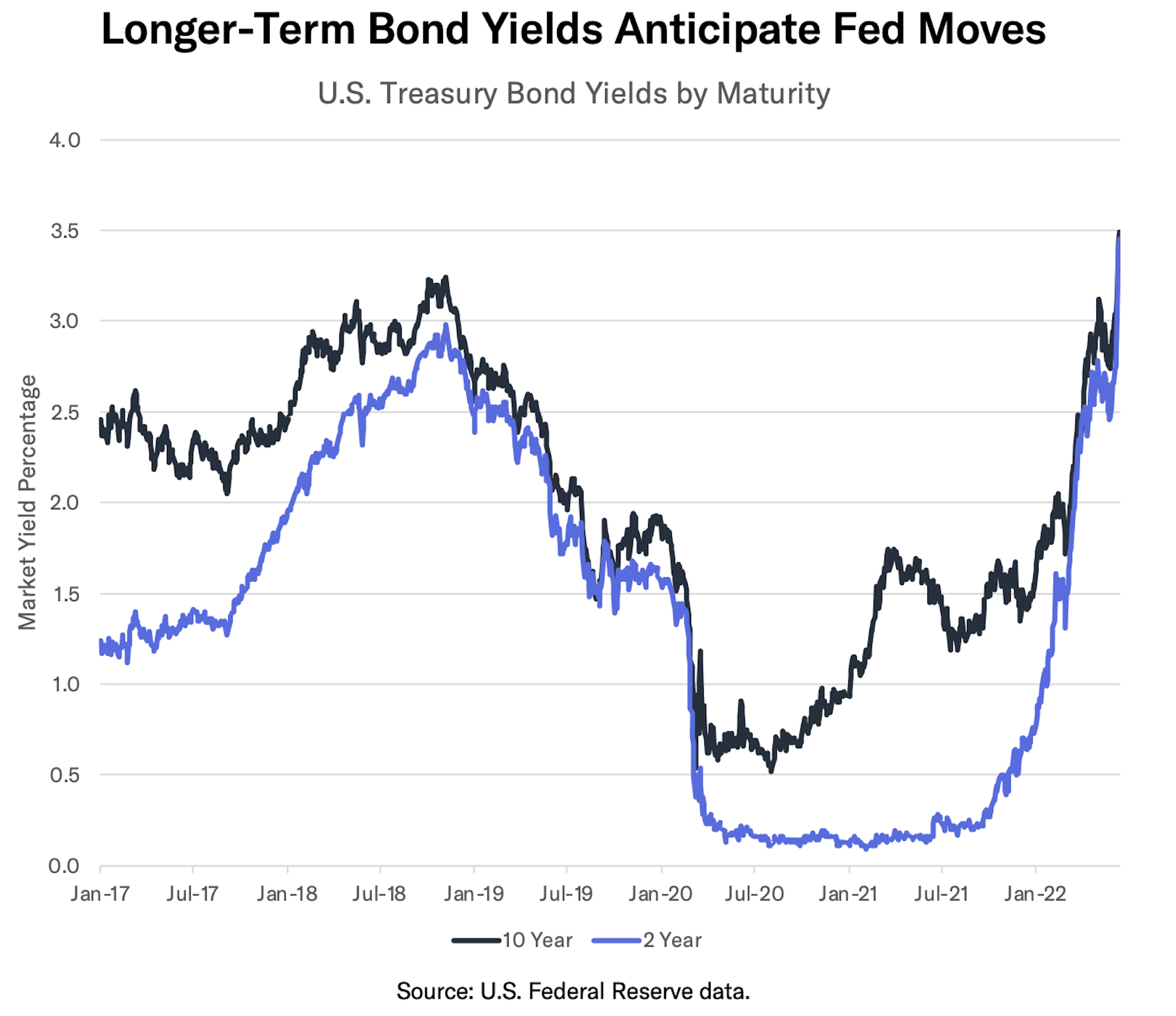 The U.S. Federal Reserve met this past week and raised the Federal Funds rate by 75 basis points to 1.5%. It was a more rapid increase than the Fed had suggested even a week earlier and it was the largest single rate hike since 1994. So why the big move?

A critical question for the Fed is whether it can head off inflation before it becomes entrenched in people’s expectations and practices. The latest CPI report not only showed the headline rate rising from 8.3% to 8.6% but it showed inflation spreading into parts of the economy that did not seem linked to supply chain interruptions or shortages stemming from the conflict in Ukraine.

So the Fed not only adopted a 75 basis point Fed Funds increase, but one governor suggested another could be on the way in July.

Higher interest rates are meant to slow the economy by increasing the hurdle rates on investments, making mortgages and car loans more expensive, and generally making it more costly to consume today than in the future. But the Fed Funds rate only concerns very short term borrowing. Much of the impact depends on how it drives longer-term rates.

Those moves put the two yields very close to one another. This draws attention in financial markets because in times when markets expect healthy growth, they charge more money (higher yields) for longer-term borrowing. When markets are charging more to borrow in the short term than in the long term (known as an “inverted yield curve”) this is a moderately reliable signal of expected trouble ahead.

Beyond the relative position of the two rates, are all of these interest rates high or low? That’s a more involved question than it might appear. For the economy, it matters how much higher or lower these nominal rates are than the inflation rate. They’re obviously much lower than CPI over the last year, but what about CPI for the next two or ten years? That depends on inflation expectations.

The Fed is trying to manage those expectations through its actions. One additional output from its meeting was a revision to its own forecast. It raised its prediction for inflation (PCE) in 2022 from 4.3% to 5.2%. It slightly lowered the forecast for the ensuing years, however: 2.6% in 2023 and 2.2% in 2022. Hopes for an inflation turnaround have not proven transitory.

Flexport research reports in the past week included an introduction to the extension to our Trade Activity Forecast which now covers U.S. exports and trade deficit as well as imports.

We took a deep-dive into the state of corporate inventories, covering over 1,400 companies and find in many instances the inventory / sales ratio was already above pre-pandemic levels at the end of Q1’22.

The South Korean trucking strike provided a timely lesson of the costs of labor action (see more below). Finally, we provided a wrap-up of a key supply chain panel at the CEO Summit of the Americas.

The Bank of England and the Bank of Switzerland both increased interest rates this week - the latter was a surprise to markets and was the first rate hike since 2007. Japan bucked the monetary tightening trend and engaged in significant quantitative easing.

Headline U.S. retail sales fell by 0.3% sequentially in May, underperforming the 0.1% rise expected by economists. A 3.5% drop in motor vehicle sales was largely to blame, though other large durables including furniture and appliances fell by 1.1% too. E-commerce firms also experienced a decline of 1.0%.

U.S. producer prices rose by 0.8% in May vs. April. That was faster than April’s 0.4% increase but incorporated a 5.0% rise in energy from 1.6% a month earlier. Transportation and warehousing services rose by 2.9% - note that warehousing rates have continued to surge on higher utilization, as flagged in Flexport’s Logistics Pressure Matrix.

U.S. industrial production rose by 0.2% in May. It was the smallest increase of the year, but marked the fifth consecutive monthly increase; they have averaged 0.8%.

Euro Area inflation climbed from a 7.4% annual rate in April to an 8.1% rate in May. That compares to a 2.0% rate measured one year ago. Higher energy costs were the largest contributor.

EU merchandise trade dipped 6% lower in April vs. March, led by a 10% decline in exports. While the latter included a 22% slide in exports to Russia linked to the application of sanctions, trade with most other major partners fell too. Notably imports from Russia are still 76% higher than a year earlier, largely reflecting higher commodity prices.

Japan’s international trade activity dipped by 1% in May versus April, with an 8% surge in imports offsetting a 10% slide in exports. The surge in imports was largely due to higher energy prices while the export decline included a one-third drop in automotive exports (see above). Exports are still 16% higher than a year earlier however largely due to chip shipments.

The 12th Ministerial Conference of the World Trade Organization reached agreements on: intellectual property for vaccines; continued waiver of tariffs on e-commerce services; fisheries subsidies; and a commitment to launch a process for WTO reform. The latter may prove most consequential given the dysfunction in the WTO’s dispute settlement process.

The European Union will likely grant “candidate status” to Ukraine with a discussion due later in June according to EC President Ursula von der Leyen. That may help to liberalize trade but typically takes years to achieve and requires significant structural reforms. In the meantime the U.K. has cut tariffs on imports from Ukraine.

The U.K. government has introduced legislation to allow it to suspend some elements of the Northern Ireland Protocol, a critical part of its trade arrangements with the EU. Key items are: a red-lane / green-lane approach for goods shipped from the mainland U.K. to NI for sales there as opposed to exports to the EU; and a removal of jurisdiction of the ECJ.

The Biden administration is still reportedly considering removing some of the Section 301 tariffs on imports from China as part of the battle against inflation. As flagged in recent Flexport research the tariffs cover a wide range of consumer and supply chain component goods.

U.S. business inventories surged 16.6% higher year over year in April, outpacing sales growth of 13.7%.That resulted in an increased inventory-to-sales of 1.29x across manufacturers, wholesalers and retailers - the highest since February 2021. Inventories at manufacturers are proving the slowest to receiver, having only increased for the first time since August 2021.

Malaysian firms ranging from agriculture to semiconductors are short of staff and are therefore turning away orders. A prior reliance on migrant workers has been undermined by COVID-19 restrictions and has yet to return to normal.

Four major auto parts suppliers in Japan are furloughing staff for as much as 10 days in June as the result of reduced demand from the big Japanese automakers who in turn have had to deal with semiconductor shortages. One major U.S. manufacturer has started layoffs at a body-part stamping factory due to downstream parts shortages.

The U.S. Department of Defense has signed a second deal with rare earths refiner to build a “heavy rare earths” separation plant in Texas. That follows two “light” contracts signed by DoD (one of which with Lynas) as it seeks to reduce exposure to Chinese rare-earths exports. China accounted for 65% of U.S. rare earth imports in 2021 (source U.S. Census Bureau).

European natural gas prices have climbed by 15% in the past week, extending conflict-related gains. Russia has twice cut shipments via the Nordstream 1 gas pipeline, which runs into Germany with flows down by as much as 60%. The Russian government has also threatened to cut supplies via the pipe completely.

Crude oil markets have also been roiled by the conflict and resulting sanction, though less so than gas. The U.S. Treasury has extended a waiver for certain crude oil sanctions to Dec. 5 from June 24.

Food markets have also suffered from the loss of Ukrainian cereal exports during the conflict. That’s led the U.S. to provide financing to build grain storage and shipping facilities in Poland to facilitate exports from Ukraine that cannot use blockaded ports. The European Commission has launched an app to match Ukrainian exporters with EU logistics firms.

Chart of the Week - The Cost of Strikes 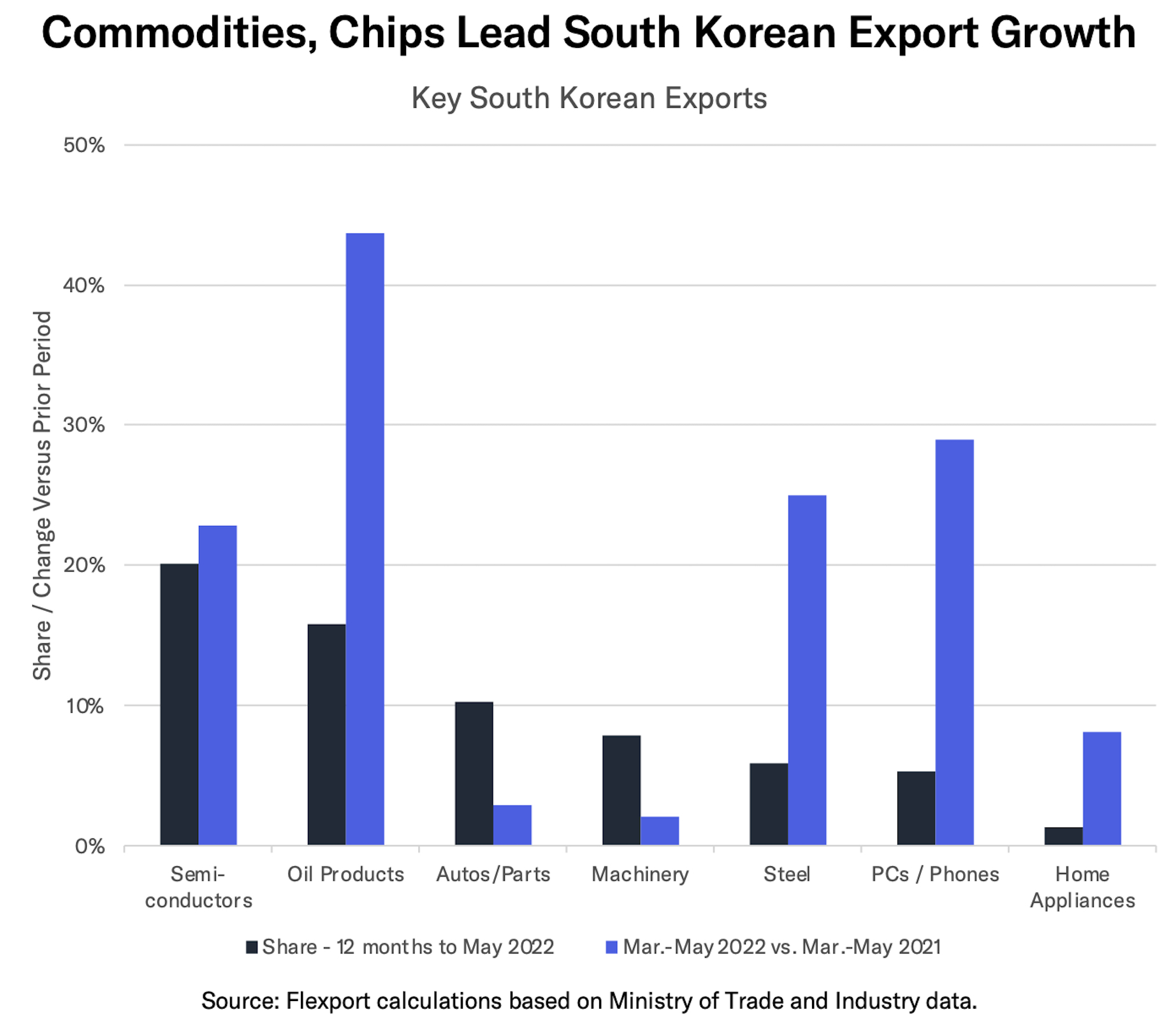 A two-week strike by South Korea’s truckers has reportedly disrupted as much as $1.2 billion of trade. In a short report last week we’ve took a look at which products may have been affected most and what lessons can be drawn from the strike.

As shown in the chart above, South Korea’s largest exports in the 12 months to May 31 were semiconductors, oil products and auto-parts. Oil products may be less affected as they tend to move straight from the refinery to shipping vessels. Semiconductors meanwhile have a high value-to-volume ratio so may have been able to continue moving with minimal trucking capacity.

The automotive sector meanwhile, alongside industrial and construction machinery which has also seen slow growth recently, has fewer options and has in any event already been beset by a series of supply chain disruptions including parts shortages.