Tools of the Trade - Machinery Export Sanctions Against Russia

The steady expansion of sanctions against Russia includes restrictions on exports of selected capital equipment by the U.S. and EU. Why are the U.S. and EU sanctioning machinery exports to Russia? Which industries may be affected? Who are the alternative suppliers? The answers to these questions suggest the new list targets long-term commodity production where prior sanctions aimed to reduce short-term export revenues.

The U.S. Bureau of Industry and Security, part of the Commerce Department, has issued a final ruling on the export of selected machinery and other products to Russia. The rule requires export, re-export and in-country transfer permits for the products covered.

The ruling implements the detailed elements of U.S. sanctions against Russia first announced in early March in connection with the conflict in Ukraine. It also augments sanctions which have mostly focused on restricting exports from Russia as well as financing arrangements for both Russian importers and exporters.

The ruling explicitly aims to “restrict Russia’s ability to withstand the economic impact of the multilateral sanctions, further limit sources of revenue that could support Russia’s military capabilities, and to better align with the European Union’s controls.” 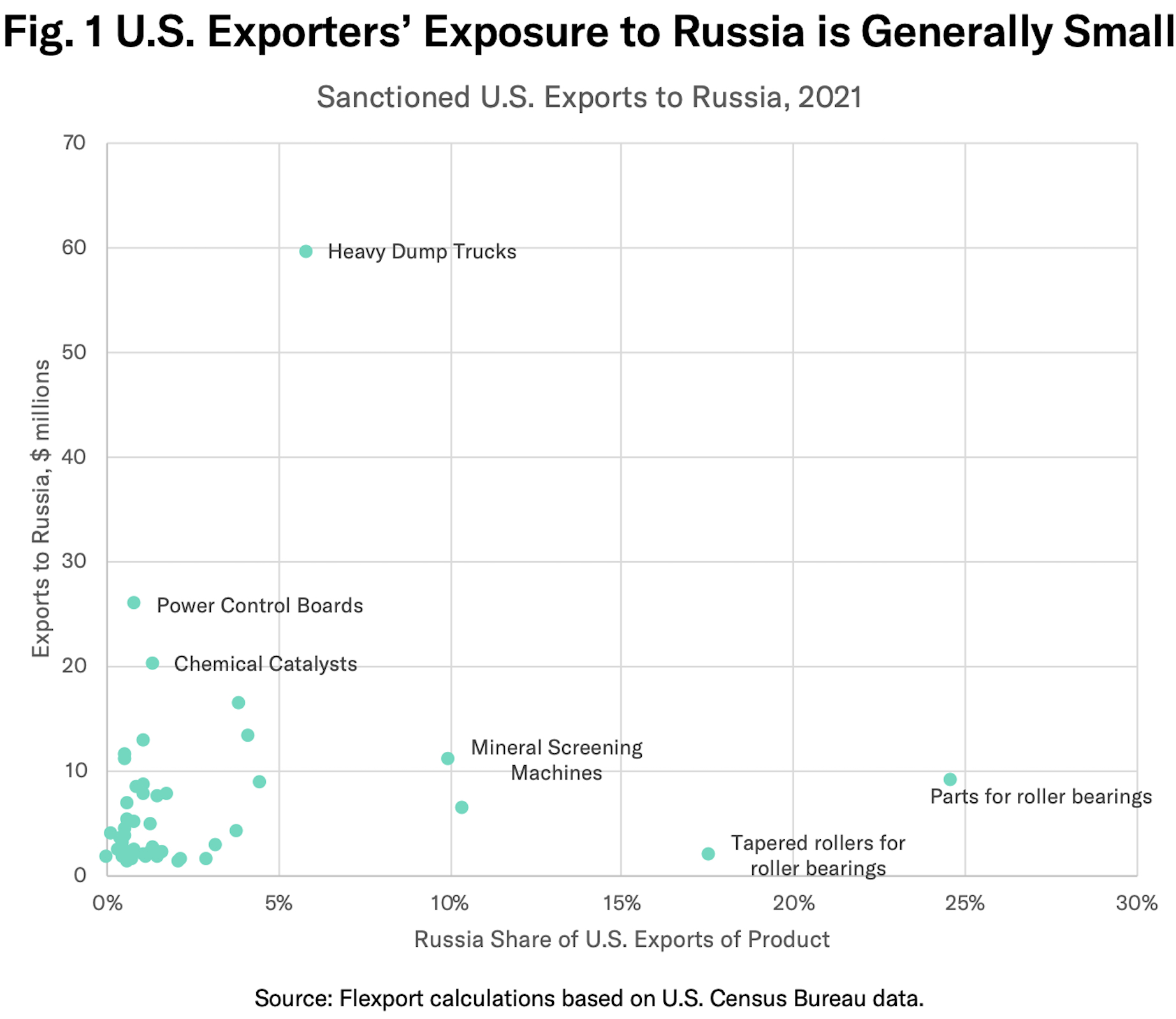 The list of 486 products (HS-10) is dominated by machinery used in the energy and mining sectors. The new list demonstrates the targeting of long-term extracted commodity production where prior sanctions aimed to reduce short-term export revenues.

For context, 44% of Russia’s exports were accounted for by energy and mineral commodities (HS 26 and HS 27) in 2020 according to UN Comtrade data. The targeting of Russian coal and oil exports has already been stepped up, as discussed in recent Flexport research.

The top 50 products accounted for 85.0% of total exports targeted under the new sanctions. The largest products targeted are: rear-dump haulers with a capacity over 90 tons, used in mining, worth $60 million; two types of geophysical surveying products worth a combined $30 million; power distribution control boards worth $26 million; and chemical catalysts worth $20 million.

With a few exceptions the impact on U.S. exporters may be minimal. In aggregate, exports to Russia only accounted for 0.6% of total U.S. exports of the products covered. Exceptions include tapered roller bearing parts where Russia accounted for 24% of exports, mineral screening machines (10%) and the already-mentioned rear-dumpers (6%).

In aggregate, the U.S. accounted for 5.8% of Russian imports of the products covered by the new export restrictions (Flexport calculations based on UN Comtrade data). Thus, for many, Russia might be able to turn elsewhere for sourcing. Yet, for 20 products (defined at HS-6) the U.S. accounted for over one-quarter of supplies, suggesting reduced availability of alternative supplies from the rest of the world. 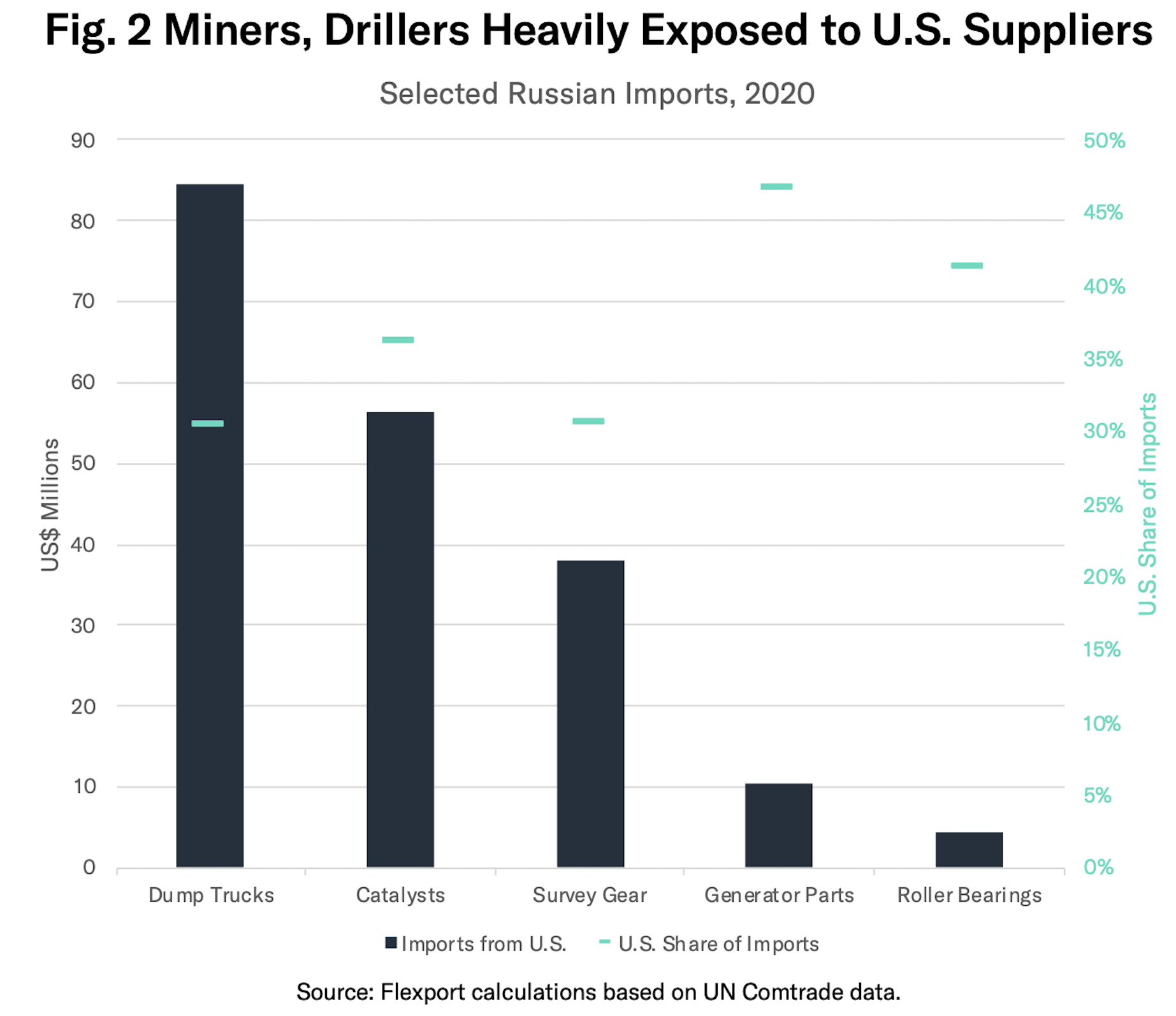 Notable products where the U.S. had a high share in Russian imports, as shown in Figure 2 above, include: petrochemical catalysts, where the U.S. accounted for 36% of Russia’s $156 million of imports in 2020; survey equipment and parts at 28% and 35% respectively; and heavy duty dump trucks at 30%.

There are also a wealth of smaller value imports of critical spare parts such as roller bearings and gas turbine parts where U.S. suppliers account for the majority of Russian imports. More esoterically, a limit on exports of rocket engines may disrupt the satellite launch industry.

First, the EU and U.S. have coordinated sanctions on the products involved with other G7 members likely to follow suit. Second, suppliers from other countries that have not yet applied sanctions may be reluctant to sell to Russia for fear of triggering secondary measures. 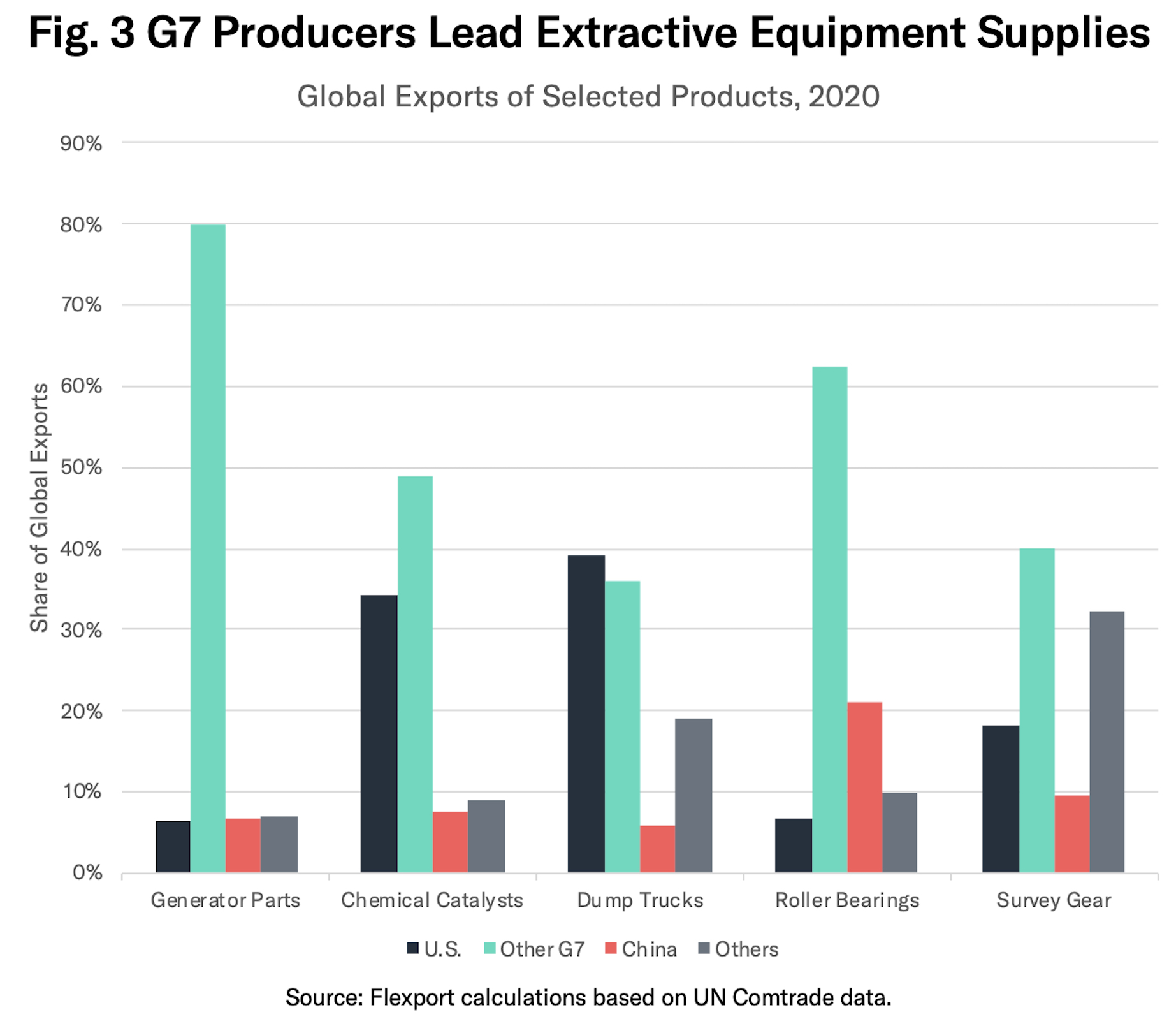 Roller bearing parts represent a rare area where China might provide significant alternative supplies, but even there the U.S. and G7 accounted for 69% of exports and China just 21%.

In conclusion: The latest U.S. export sanctions are carefully targeted at Russia’s extractive industries and may cause a long-term diminution in production to go with the short-term impact of import embargoes. There may be few alternative suppliers for some of the most significant products including dump trucks, chemical catalysts and generator parts.