For October, both disposable income and real personal consumption expenditures were up. This is not consistent with a rapidly slowing economy, nor do the latest numbers support a restoration of the balance of goods and services consumption to pre-pandemic norms. 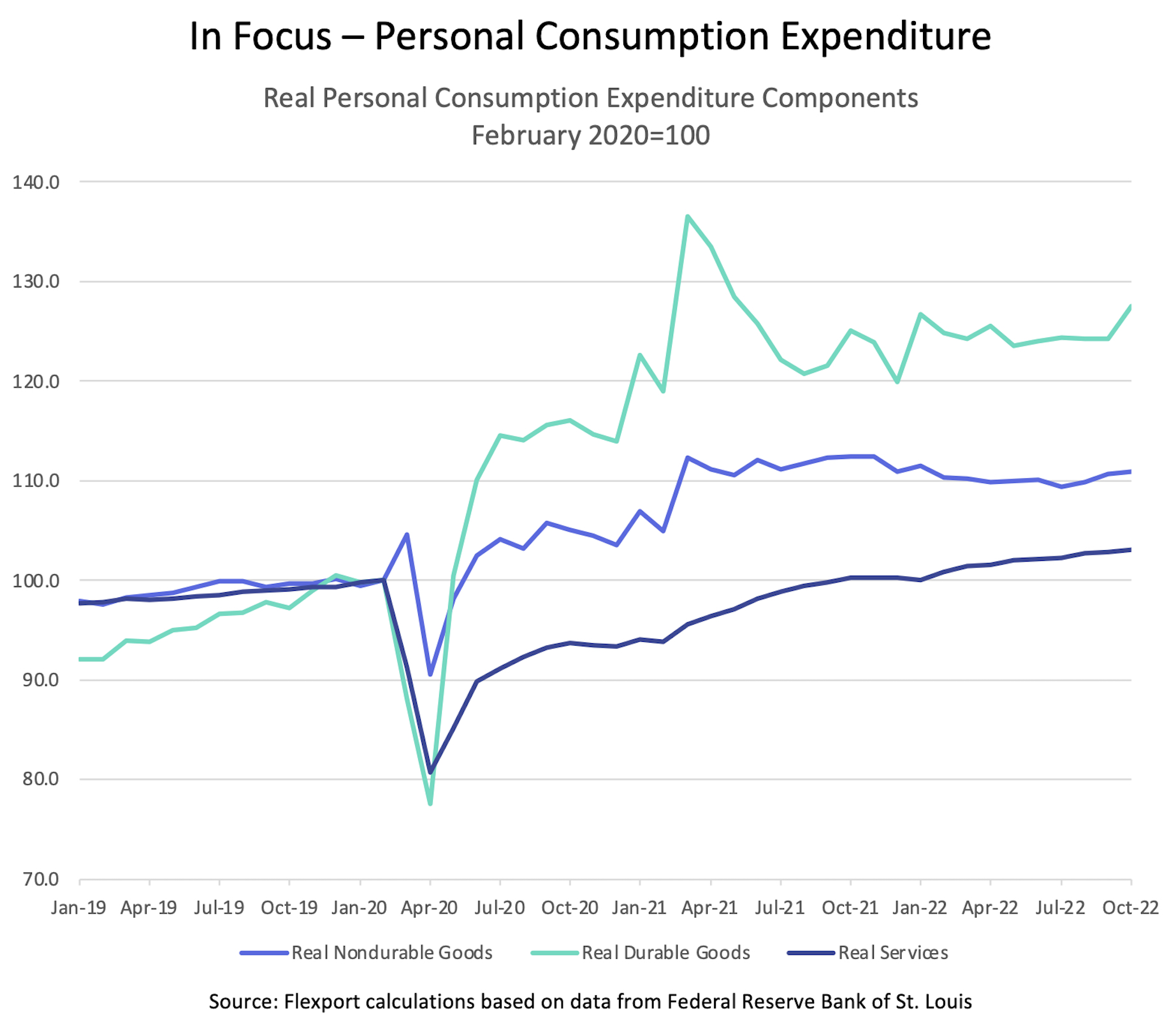 There was little sign of an economic slowdown in this week’s data on US October personal income and outlays. Real disposable personal income was up by 0.4% for the month; real personal consumption expenditures were up by 0.5%. Each of those statistics has dropped in only one month out of the last five, and those drops were in the summer.

The chart offers some degree of historical perspective to what has happened to the three components of real personal consumption expenditures. To do so, it normalizes their levels to February 2020, on the eve of the pandemic economic shock. It is worth keeping levels in mind: in October, services accounted for 65.7% of personal consumption expenditures; nondurable goods were 21.6%; durable goods were 12.7%.

The chart goes back to January 2019 to illustrate how wild and different consumption behavior has been during the pandemic era. Prior to the pandemic, the three categories largely moved in parallel, and a 5-10% swing over a year was a very large one.

If the US economy is pulling back, it’s not yet showing up in consumption numbers.

The US job market remained strong in November. In BLS data, the unemployment rate remained at 3.7%; it has been in a 3.5%-3.7% range since March. There were 263K net new jobs, roughly in line with the average of the past three months. Labor force participation was largely unchanged.

The Federal Reserve’s preferred inflation gauge showed continued strong price increases. The Personal Consumption Expenditure deflator, excluding food and energy, increased by 5.0% in the 12 months to October. While that was a dip from 5.2% in September, the figure has bounced between 4.7% and 5.2% since April. The smoother Trimmed Mean PCE figure held steady at 4.7%. All these figures are well above the Fed’s 2% target.

US Q3 GDP figures were revised upward to 2.9%. With the revision, real final sales to domestic purchasers, a smoother measure, grew 1.1% over the year to 2022:Q3.

South Korean exports dropped 14% in the year to November. It was the largest drop since mid-2020. The figure is sometimes taken as a bellwether for trade. In this case, the drop appeared to reflect a slowing in China and lower demand for semiconductors.

Congress passed and President Biden signed a bill legislating an agreement on labor terms in the rail industry, thus precluding a strike. In his statement, President Biden said, “Our nation’s rail system is literally the backbone of our supply chain…A rail shutdown would have devastated our economy.”

Chair Jay Powell suggested that upcoming Fed rate hikes might be smaller than recent 75 basis point hikes. While this was taken by markets as encouraging news, Powell issued important cautions. First, he noted that “Despite the tighter policy and slower growth over the past year, we have not seen clear progress on slowing inflation.” He then concluded that a policy of smaller rate hikes would be “far less significant than the questions of how much further we will need to raise rates to control inflation, and the length of time it will be necessary to hold policy at a restrictive level. It is likely that restoring price stability will require holding policy at a restrictive level for some time.”

Senators Rob Portman (R-OH) and Chris Coons (D-DE) announced plans to introduce a “Trading System Preservation Act” in the remainder of the current Congress, saying congressional inaction on trade had been highly costly. The plan would include limited Trade Promotion Authority, covering sector-specific agreements at the World Trade Organization.