How Importers and Exporters Can Claim Millions in Duty Drawback

Duty Drawback is an often overlooked and frequently misunderstood program. We can already hear some of you asking, “duty what-now?” This post is directed at you, the logistics professional, or CFO, or ecommerce wearer-of-many-hats.

Duty Drawback is available to any U.S. importer who exports their products but this year had some noteworthy milestones. July 2022 marks the four year anniversary of the first round of Section 301 tariffs (aka China-U.S. tariffs) that were implemented by the Trump administration.

Starting a Duty Drawback program today will ensure that your company can claim the maximum refund possible from these Section 301 tariffs. In the past four years, the U.S. has collected $141 billion on imports from China, nearly double what it normally collects in a four-year span.

Why start now? Every Duty Drawback claim in the U.S. ends up getting processed by one of only 32 U.S. Customs employees. This capable but understaffed team is on track to refund a record $3 billion in Duty Drawback in 2022. Net new Duty Drawback programs may take up to a year to set up and file the first claim. So while we wish we could increase the number of claims processors, the next best recommendation is to start your Duty Drawback program sooner.

Flexport recently hosted a webinar in which our Director of Duty Drawback, Tim Vorderstrasse, discussed the benefits of this program with two of ours clients: Aman Advani, CEO & Co-Founder of apparel brand Ministry of Supply and Dan Strick, Manager of Trade Compliance, K&N Engineering, an automotive filtration and technology brand. In this blog, we’re sharing how they’re companies are benefiting from being able to easily claim money they were leaving on the table.

Duty drawback is a great opportunity for many companies who import and export to, effectively, find some money they thought was spent and gone. The program has been around since 1789, having been penned into the same act that created tariffs and U.S. customs. Over the centuries, and particularly in the last several decades, there have been many improvements and updates to the process.

That inbound money is wonderful for investing in big strategic initiatives, inventory and insurance. Flexport provided a one-stop shop that made the duty drawback process significantly easier.

The last few years have brought added complexity to the global supply chain. From COVID lockdowns and travel restrictions to port congestion and the U.S. 301 tariffs, many businesses are just trying to stay in stock. In this challenging climate, there is barely any time for companies to increase reach and expand into new markets, let alone take advantage of a lengthy, paperwork-heavy government program—even if it does give them money back.

Although drawback regulations do open opportunities that weren’t available previously, there are some hurdles a business must navigate to start realizing these duty recoveries. The program is intended to promote innovation by helping companies build their export footprint and aid with profitability. That intention remains the same, even several hundred years later.

Do You Qualify For A Duty Drawback?

Many organizations that sell internationally have heard talk of the duty drawback program. Others have worked with large customs brokerages and got lost in the paperwork. And still, others may have no idea the program even exists. With all he knows about global trade, Aman Advani was not surprised an initiative like this was in place—yet Ministry of Supply had never initiated a drawback despite 15% of their sales being abroad.

Once they started offshoring some of their fulfillment and 3PL, Advani decided it was time to dive in. The brand started with drawback specialists, but after three or four false starts and paperwork dead ends, they concluded that it wasn’t worth the time and resource drain. Then they called in their dedicated team at Flexport who said, “we can do that, too.” After nearly two years of false starts, in under a year Ministry of Supply had completed more than half a dozen successful duty drawback claims. 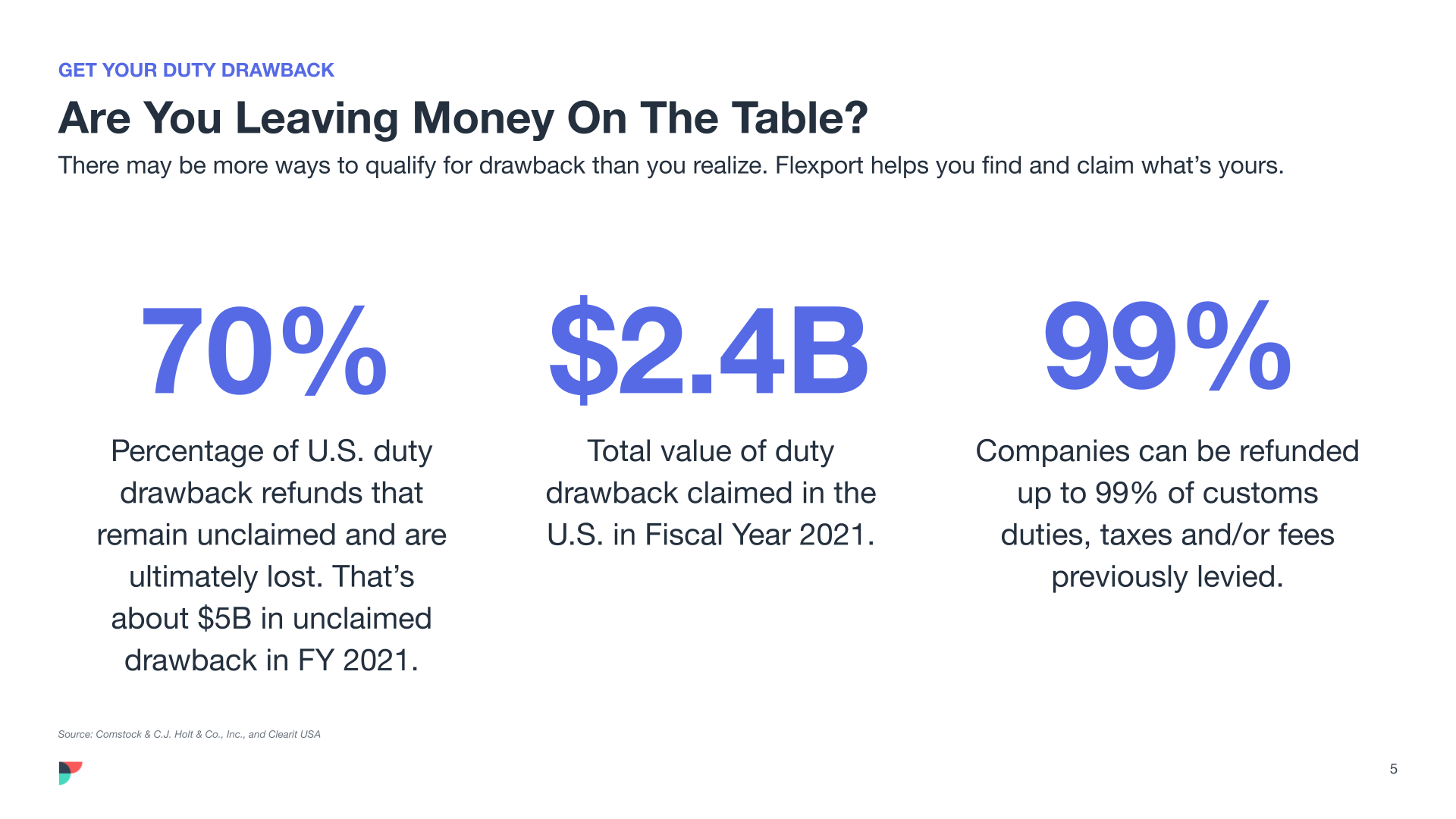 Just recently, Aman heard from the drawback team that they were working on a claim he hadn’t even seen coming. This money, money he had assumed was just gone into the customs black hole, was like found capital for the company. Despite the challenges involved, having all their customs paperwork already in the Flexport platform makes it a breeze for Aman and his team to realize this kind of surprise capital on a regular basis.

Over at K&N Engineering, Dan Strick had come from a stint working for U.S. Customs. Despite this deep knowledge, the process of setting up claims for his new employer still took him some time. Once he had contacted Flexport to get the drawback ball rolling, he informed his bosses that they were going to see an incoming check in the near future. He calls that first refund “a huge shot in the arm” for the company. The way the economy has hit industries like auto parts, an unexpected cash infusion is something they can always look forward to.

Having launched out of MIT, Ministry of Supply has a firm understanding of the power of data. Yet, for years they operated their imports on the same paper and pen system they found their partners using when they started. When he first heard about Flexport and our data-centric model, Aman was intrigued. The company already operated on a test/iterate/revise model similar to the software development cycle, so it was a natural fit. After 10-15 shipments came in on time and on budget, he was convinced he should make the switch. 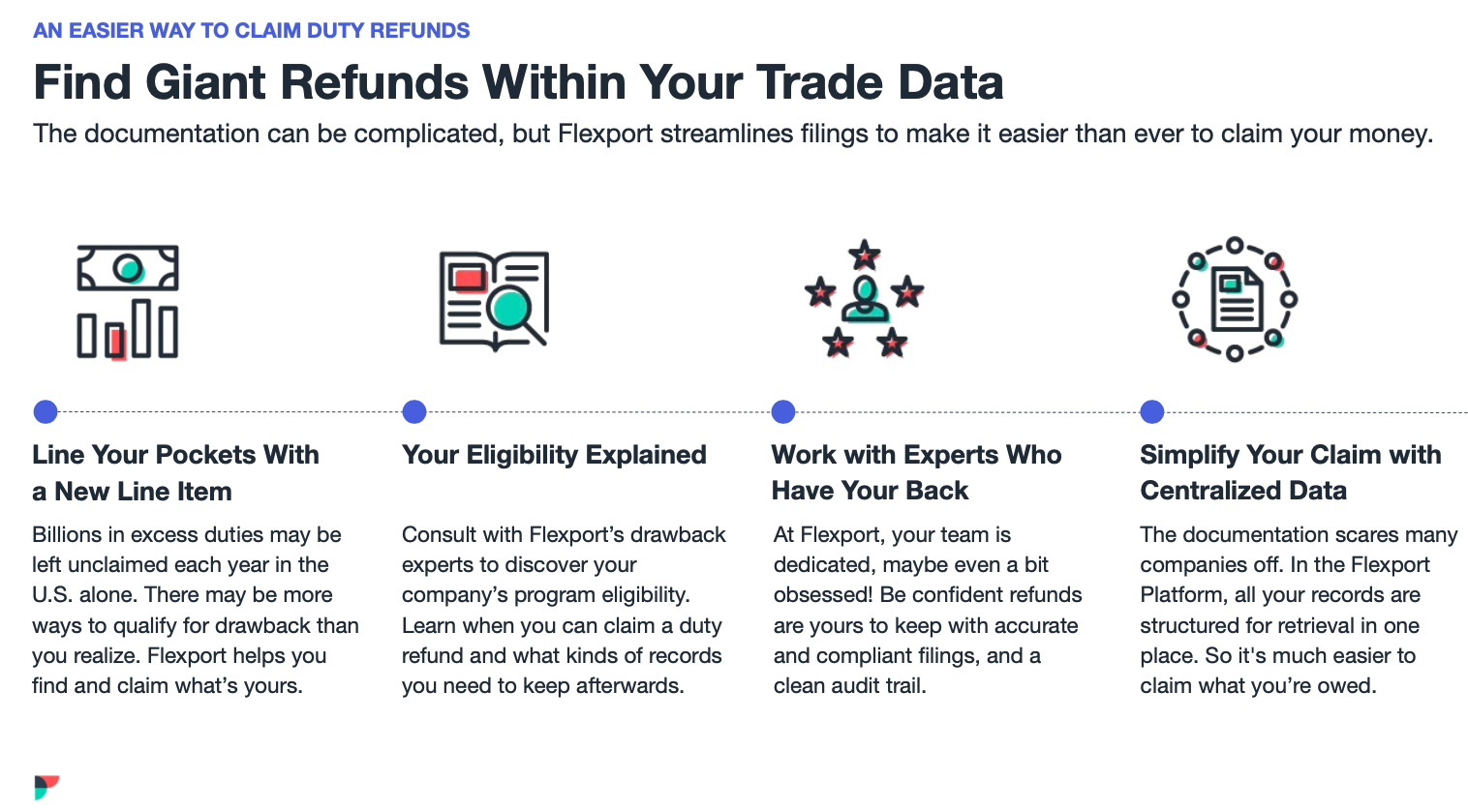 Adding drawback to the contract was a breeze since Flexport already had the company’s shipping paperwork and data stored at their fingertips. This existing relationship was extra helpful when Ministry of Supply bifurcated their warehouse by shifting some inventory to a nearshore location. The resulting export claim was huge and could have presented a difficulty. But by working with their team at Flexport, Admani and his team were able to realize the additional refund without any additional hassle.

Meanwhile, over at K&N, Dan went on to talk about how he initially didn’t realize that 301 duties were eligible for drawback. After preparing the paperwork for his first claim, his Flexport team reached out with a number that was a whopping seven times higher than his calculations had shown. As he says, “that made a lot of people really happy, really fast.”

One reason we enjoy working with Flexport so much is that there’s very little paperwork, electronic records rule everything, which has been fantastic. It’s like 50% of the work is already done for us for Duty Drawback before we even get started.

Get Started Today and Claim What You're Owed

The Flexport Duty Drawback team relies on our purpose-built technology Platform to structure all necessary data and expedite ongoing Duty Drawback claims. After the initial set up, your company benefits from simple claims filing for the years ahead, and transparent, shareable records for auditing. Contact Flexport’s dedicated drawback team and sign up for a free consultation with one of our experts today. Email us at drawback@flexport.com.

Now is an excellent time to set up a duty drawback program to avoid missing out on the maximum refund possible on Section 301 tariffs.

Claiming duty drawback with Flexport is fast and easy. After the initial set-up, starting claims only take a few minutes.

Duty drawback refunds give you capital you can use for expansion, R&D, and wherever else the money is most needed.

Preparing for the Many Peak Seasons of Supply Chains

How to Turn Supply Chain Uncertainty Into a Competitive Advantage

ShareTweetShare
About this author
Tim Vorderstrasse

How Duty Drawback Can Help Ecommerce Businesses Save Big