Ocean and air freight rates and trends; customs and trade industry news plus Covid-19 impacts for the week of June 21, 2022. 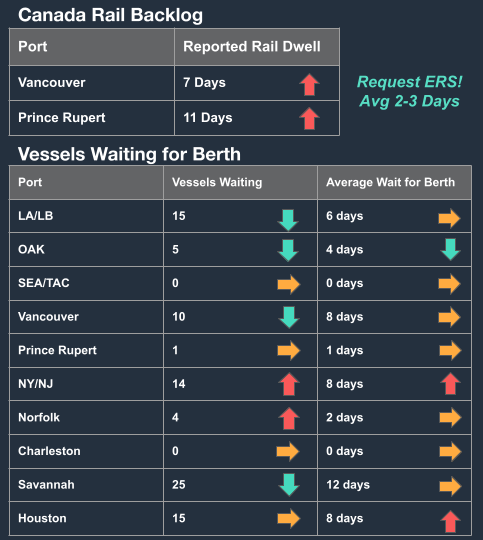 President Biden Signs the Ocean Shipping Reform Act into Law On June 16, President Joe Biden signed the Ocean Shipping Reform Act into law. This bill aims to clear out supply chain bottlenecks, punish carriers for unfair practices, and generally address the ocean freight import and export process in the United States. The new law is the biggest shakeup of US ocean freight shipping policy in decades.

US Shippers Reevaluate Trucking Strategy Trucking spot rates have dropped below contract prices for the first time in over a year, according to The Loadstar. This year most US shippers have opted for freight contracts to secure trucking capacity and protect against rate escalation. Amidst recent inflation and retail sales falling, shippers are pausing on previous strategies to build up in-house trucking capabilities or find dedicated fleets.

Global Economy and Supply Chain Bullwhip Collide As the supply chain experiences the bullwhip from the Covid days, the rest of the global economy is seeing a consumer spending slowdown, which will greatly impact freight demand. FreightWaves details what these two forces colliding will mean for ocean freight and the trucking market.

Build it and They May Not Come - Summit of the Americas Panel Do we have clarity on the Biden administration’s trade policy for the Americas? What do corporations think of it and how may they respond? Flexport’s Chief Economist, Phil Levy, recently moderated a panel at the CEO Summit of the Americas with representatives from the mining, metals, and engineering sectors.

Accidents and Precedents - Corporate Inventories Soar What’s the right level of corporate inventory? Have specific industries already overbuilt their stocks versus requirements? This report gathers over a decade of data on corporate inventory to sales ratios from over 1,400 companies. We find that inventories in Q1’22 rose 13% year over year while sales went up just 6%. There are at least seven different reasons for that disparity, ranging from deliberate strategies to accidental outcomes. The result is that the inventory to sales ratio is back to pre-pandemic levels across the group and five of eight sectors are already well above historic levels.

Weekly Economic Report: Taking the Long View The big news of the week was the U.S. Federal Reserve’s decision to hike the Fed Funds rate by 75 basis points. The transmission mechanism by which this hits the broader economy tends to be longer-duration bond rates, which have risen dramatically. The effect on the economy will depend a great deal on people’s expectations for inflation.

Air Timeliness Indicator The Air Timeliness Indicator measures the amount of time taken to move air freight along two major trade lanes from the point of consolidation to arrival at final destination. The latest indicator saw the TPEB fall slightly to 11.1 days for the four weeks leading to June 12, while the FEWB fell to 9.8 days. Both levels were last seen in late March and may reflect seasonal shifts working their way out of the system as importers switch to summer goods.

Ocean Timeliness Indicator The Ocean Timeliness Indicator similarly measures transit time for ocean freight along the same two trade lanes. In the past week, the FEWB decreased significantly to 95 days, hitting levels last seen in September 2021. The TPEB meanwhile fell one day to 98 days. Continued improvements in cargo ready to departure times may still be moving through the system as Asian ports debottleneck. The indicator may also be showing that the worst of late 2021 congestion may be passed, but the metric remains well above pre pandemic levels.

Logistics Pressure Matrix Flexport’s Logistics Pressure Matrix (LPM) gathers 10 data points in an attempt to provide a picture of the challenges facing logistics networks from the demand side and a view of ongoing activity on US-inbound routes. In the latest update, consumer expectations fell dramatically to the lowest level in over ten years. A new measure of warehouse pricing indicates that the price of storing inventory remains high along with shipping. Origin ocean handling times continue to improve while air transit times remain near previous levels.

Understanding the Trade Activity Forecast Which industries have driven the U.S. trade boom? Where might they go next? What will be the impact on the wider economy? Flexport’s Trade Activity Forecast (TAF) was launched in October 2021 to provide a guide to the outlook for U.S. merchandise imports. We have expanded the TAF to include U.S. exports and a gauge of the U.S. trade deficit. Our initial estimate indicates U.S. merchandise imports will grow by 3.7% sequentially in May and exports will dip by 1.2% while the trade deficit will reach $352 billion in Q2’22.